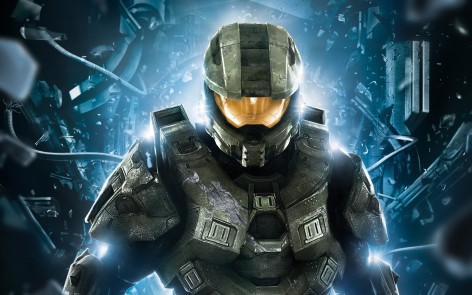 How do you combine the feel of RTS and FPS video games on the tabletop? Come see…

The folks at Spartan have been putting a lot of work into Ground Command – to make sure the tactical first-person-shooter feel you get in the Halo video games and the strategic real-time-strategy feel of Halo Wars come across in the table top experience. Derek, of Spartan Games, gives us a look at the thoughts behind the design and what you can expect from the game.

Firstly, let’s think about the challenge of creating a wargame that exists in both FPS and RTS video game genres. One is singular, fast paced, bloody and the action never stops – FPS. The other is more general, measured and requires intense forward planning to execute perfectly – RTS. Both have the wonderful Halo Universe as a backdrop of course, but both provide entirely different experiences. Let me tell you that the task of melding the two together has been challenging, but also huge fun!

In order to allow us to distill all of this diverse game-play that exists in this Universe on the tabletop, we effectively divided Halo: Ground Command into two key gaming spaces: Pre-Game and In-Game. The former refers to the Strategic/RTS part of the game and latter to the Action/FPS part of the game. In this Blog we will focus on the Pre-Game aspect of the rules, saving In-Game for Blog 2.

Pre-Game allows players to flex their RTS muscles, building their Forces strategically to complete their chosen missions. In general play, all scenarios are encouraged to be rolled PRIOR to Forces being chosen, so players can go away and plot their enemy’s eventual demise. This gives the game a planned-outcome-feel since players have had time to reflect on the mission to hand and have brought the right tools for the job (hopefully!).

The greatest challenge presented by this will be in the competitive/tournament sphere of gaming where players will often have to submit their lists WITHOUT knowing the scenarios being played. This will lead to many unusual lists being posted (something to which we are particularly looking forward to) as competitive players attempt to build their best-fit-force given the points available.

Choosing a Force is a simple process that uses the Build Rating (BR) and Maximum Force Value (MFV) methods we introduced in Halo: Fleet Battles. Like H:FB we also use the idea of Standard and Specialist Battle Groups. The former will be used multiple times by players, whereas the latter will be limited in their use, commonly limited to only one per force.

For those players who like to just roll up and play with the models they have, with no structure, we have what is called Open Selection. Players simply choose the MFV limit they want to play and go for it. But for players craving structure we have what we call Battle Group Selection. This is a more immersive, narrative style of gaming that we highly recommend.

Requisites are, however, deliberately kept to the bare minimum needed to represent the nature of their Battle Group because we want to give players lots of flexibility, allowing them to find new and innovative combinations to field. Of course, players wishing to exist in canon might decide to add more of the same Requisite units into their Battle Group, creating massed infantry formations that can become Battle Squads of UNSC or Lances of Covenant – and that’s cool. It looks great on the tabletop and plays really well. Other players may want to play with more diversity and that is possible too. The Battle Group Selection system allows for both competitive and canon players to comfortably coexist in the same ruleset.

Once Requisites have been taken, players have a number of Optional Build Rating points to spend in each of the following categories: Infantry Units, Armoured Units and Air Units. The points available will vary depending on the Battle Group chosen, giving certain Battle Groups greater access to some types of Unit, or may even skip using a Unit type altogether.

For example, a Covenant Spectral Host Battle Group (Elite Ghost Units optional Air Support) allows a Covenant player to not have any Infantry and instead field lots of fast attack Ghosts with Elite drivers. This is a Specialist Battle Group and is limited to one per force. It is static in its requisites (Ghosts!) but can have access to a Flyer (the awesome Phantom) if a player wants to spend the BR and Points to add it their Force.

A UNSC Standard Armoured Battle Group only has Armoured Units as Requisites. A player can still add some Infantry if they want, or even add Flyer Units, or they could just spend all of their points on Armour and as this is a Standard Battle Group a player can take several in their Force if they so choose.

All of this leads to an incredibly flexible force building mechanic that gives the game great longevity. There will be literally thousands of combinations available, giving players the chance to execute their plans in a prepared way (especially when using the select your force after selecting the scenario method). Inside the core rulebook we detail two Standard Battle Groups for both factions: Infantry and Armoured. This gives players a fantastic starting point when choosing their Forces. As we release new Units we will provide more Standard and Specialist Battle groups for players to field.

Finally, when we discuss Force Building, it is important to understand that the Build Rating of a model (Element as we call it in the game) and a Unit (a collection of Elements) is what translates to Victory Points. It is a simple method and allows games to be won by destroying Units of Infantry, destroying Armoured models, shooting down Flyers, capturing Objectives, killing Characters and so on.

While we are still within the Pre-Game sphere of Halo: Ground Command, lets discuss Terrain. All Terrain is placed using mutual consent to encourage the construction of fair and reasonable battlefields. We have created a system for Terrain to be generated in competitive play, but in truth we expect most players to be able to come to an agreement on their battlefields. This brings Terrain firmly into the narrative and mirrors the Halo Universe better than a strict Placement-Regime. The rules of Terrain are binary to make it simple to use and fast to play with – for example, you can or you can’t move through it; you can or you can’t shoot through it, or a combination of both. This makes Terrain nice and simple to play with, but still gives players a strategic view of the battlefield and allows for a planned route of advancement. We will be creating many wonderful pieces of Terrain for the game, ranging from simple Supply Drops to amazing structures like the Covenant Stealth Pylon.

As the game is 1/100th scale, Terrain is also readily available in the general market and of course you will see us bring out some cool-looking Terrain of our own. Look to the Halo Video Games for some cool battlefields and inspiration before having a go at creating some of your own. Yoghurt pots, fuse boxes, toothpaste tops – with a little imagination, the possibilities are endless!

OK, time to consider Commanders. In HFB we adopted a narrative route, giving players the named characters that were present at the Fall of Reach: Rho ‘Barutamee, Lord Hood, the Minister of Etiology et al. These were set with a narrative, as opposed to a competitive, focus with their gameplay.

At the time of writing those characters into rules, we did not know really know just how successful the HFB game would be in terms of organised play and were pleasantly surprised when players started to clamour for competitive/tournament rules. The speed with which the game was embraced in the competitive sphere means that when it came to designing Halo: Ground Command we chose to launch the game with competitive biased Generic Force Commanders, instead of named narrative ones. But fear not, named Commanders will be released down the line and we will leave you to speculate who!

Inside the Battle for Reach 2-player starter set, players will get a Generic Force Commander for both factions that is limited to three Standard Orders and a Factional Order. These Commanders will be used in the competitive sphere as they are very similar, so delivering a level playing field. Generic Commanders are also considerably cheaper in terms of points, giving players to spend on their other combat Units. There is a lot to take in here as regards the Strategic/RTS side of the game, but in summary:

That covers the majority of the Strategic/RTS parts of the Pre-Game, leading us into the Tactical/FPS, or In-Game, aspect of the game. That will be our next Blog, so see you all then.

If you have any questions feel free to head over to our Forum!

What do you think – is the pre-game/in-game idea a good one?