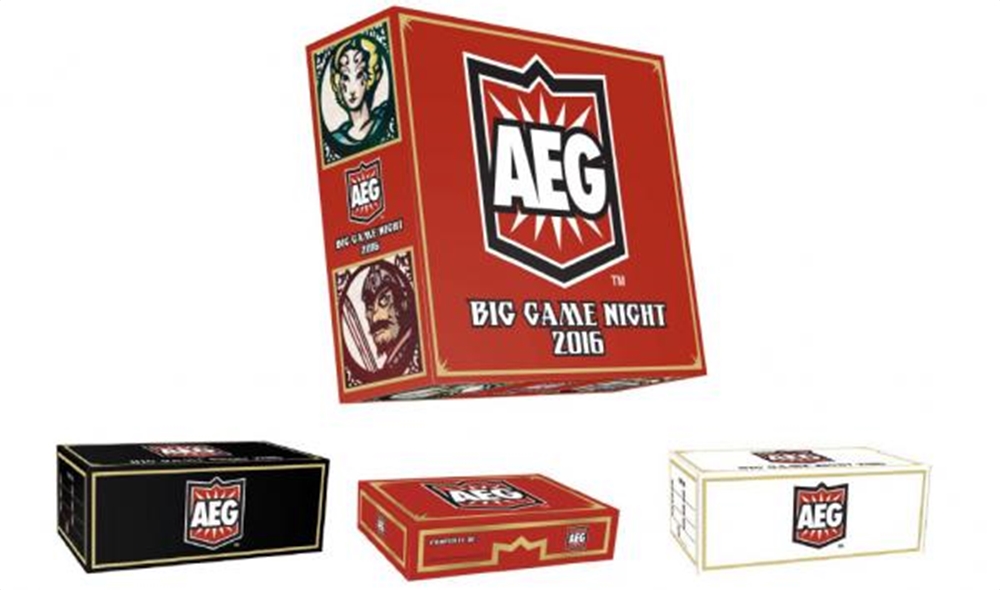 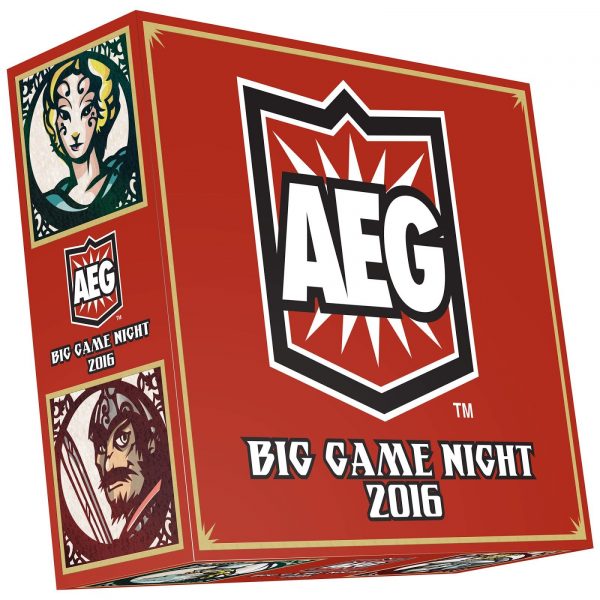 The Tabletop Spotlight is on AEG’s Big Game Night 2016!

So what’s in the box? More BOXES! And also 4 games – but why would you want to buy a box with more storage space than games inside? So you can store all your AEG games, silly. But you’re right – it’s not like the concept of having more storage would ever take off. Who wants to be organized or anything…

Oh wait. That is a thing.

I’m just poking fun but there does seem to be a lot of misconception about what this big box is for. Yes, it comes with games in it (all four of which are fun by themselves – check the links below) but really it’s for anyone that has a library of AEG games. Or really anyone with a lot of card/pocket sized games.

I have a lot of what you might call “non-gamer” friends. They are all at different skill levels and enjoy different play styles. So when I go to hang out with them finding the “right games” and carrying them all is a hassle. But now, I can put all their favorites in one box and take it with me – that’s a win in my book.

This box is perfect for consolidating those collections down into one easy to transport box. I, personally, have every expansion for Smash-Up except the Obligatory Cthulhu set. Let me just say, I’m running out of room for that series. On top of that, I have several over card/pocket sized games that I can see fitting in this box, so yes – I’m genuinely excited for this thing.

I haven’t even mentioned the 4 games you DO get in the box. I’ll include links below for each one of those below as well. Each one is unique and worth checking out – and perfect for your next big game night!

You will also find:
2 boxes fitted to contain up to 7 games from AEG’s pocket line!
3 empty pocket line boxes to store gaming components such as dice, tokens or even other games!

Note: These links are just to the core sets and are not the same editions as the ones included in AEG Big Game Night 2016. 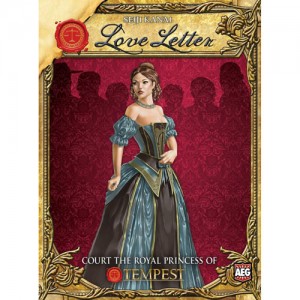 Love Letter is a game of risk, deduction, and luck for 2–4 players. Your goal is to get your love letter into Princess Annette’s hands while deflecting the letters from competing suitors. From a deck with only sixteen cards, one card is removed from play, and each player starts with only one card in hand. On a turn, you draw one card, and play one card, trying to expose others and knock them from the game. Powerful cards lead to early gains, but make you a target. Rely on weaker cards for too long, however, and your letter may be tossed in the fire!

Say Bye to the Villains 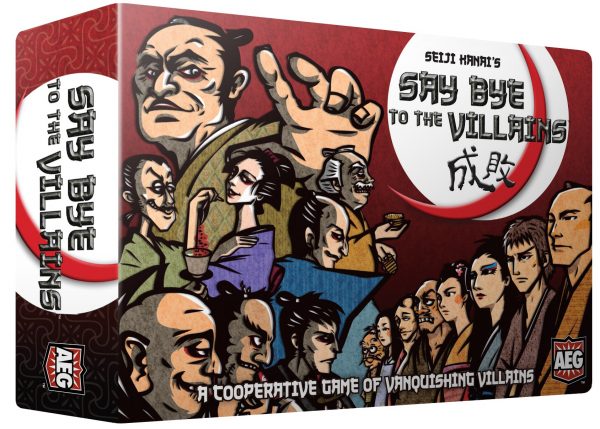 Each player takes on the role of a vanquisher, punishing villains the law cannot reach. But each villain holds several secrets. Some are guarded by many followers. Others threaten to kill hostages. And still others are perhaps not as evil as they appear. The vanquishers themselves are not invincible; ambushing a villain in a dark alley with no preparation could result in defeat as easily as victory. Each vanquisher holds a hand of cards representing that vanquisher’s special abilities and preparations for battle. Players must use these cards to learn the villains’ secrets, and to strengthen their own blades of justice. But using abilities takes time, and time is precious when so much evil is about. You must cooperate with your fellow vanquishers lest you yourselves become the vanquished! Will the vanquishers defeat all of the villains, or will evil prevail? 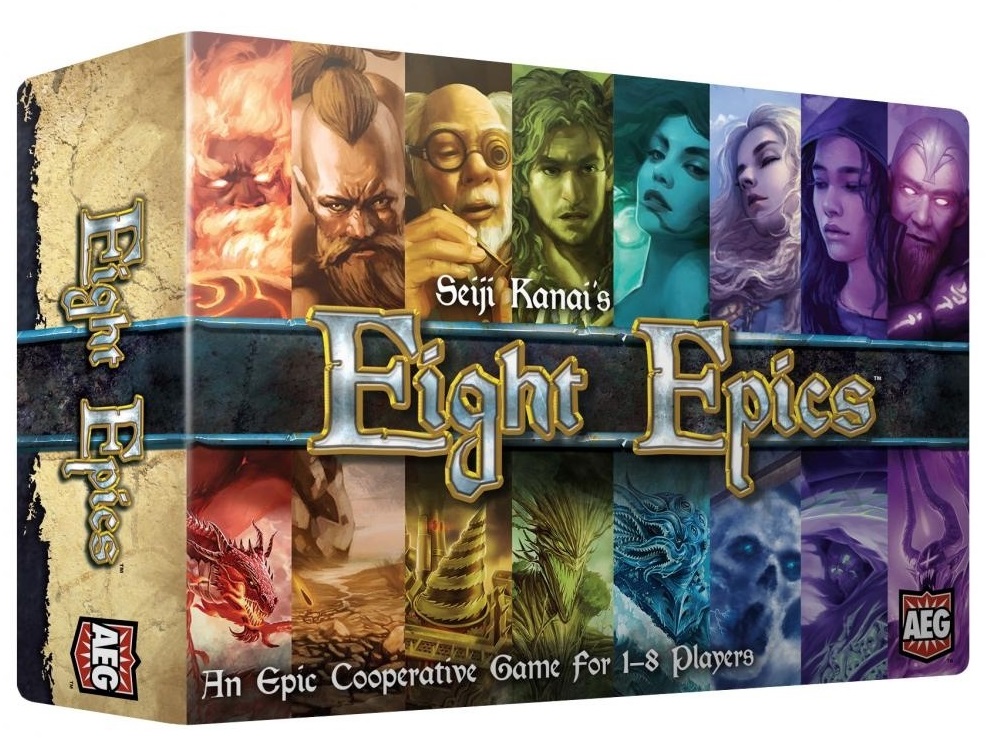 The world is on the brink of destruction. Eight cataclysmic threats have unleashed their powers onto the world, threatening to completely annihilate it. But hope still remains as eight Avatars of Hope stand relentlessly against the waves of destruction. The fate of the world lies in the balance. Will the avatars overcome these threats and save the world, or will they all perish in vain? 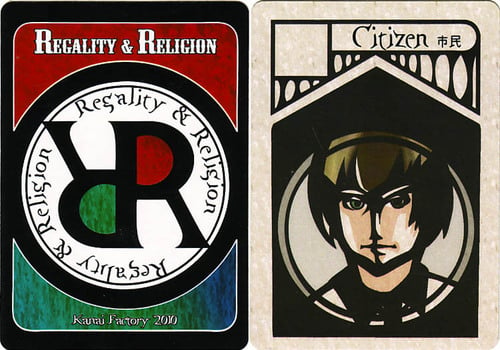 Both players start with a set of seven identical cards that act as pawns on a 3×3 board. Players take turns placing one of their cards in hand onto the board, with the card facing the active player. Some cards, when placed, rotate one or more of the surrounding cards upside down, making them face the other way; other cards destroy surrounding cards.

The game ends when the board is full, at which point the player with the most cards facing him wins.

Go forth and GAME NIGHT!