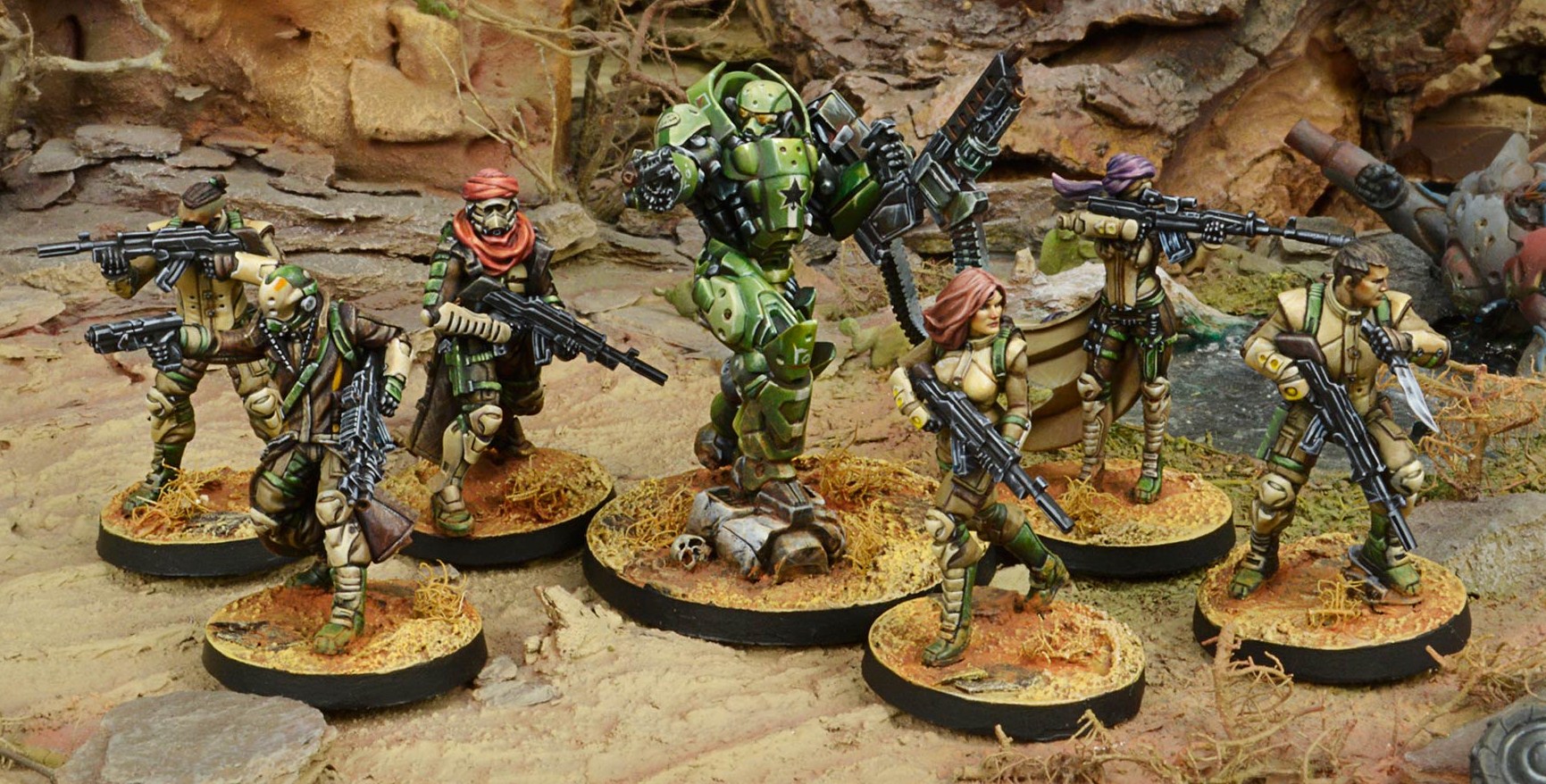 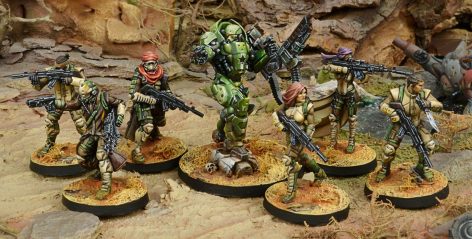 Have you been eyeing that new Red Veil box thinking of grabbing the Haqqislam half? Here’s what you need to know.

The Haqqislam starter weighs in at 7 models and around 180 points depending on how you build it. It has a good mix of cheap and versatile models centered around the durable, heavy hitting Al Fasid. Additionally all these models will work for the upcoming Ramah Taskforce – at least that’s the rumor. The Infinity forums are treating it like canon and I guess that’s good enough for me. Assuming it is true, that means this set works not only as a Haqqislam starter but a Ramah starter as well. Let’s break it down. 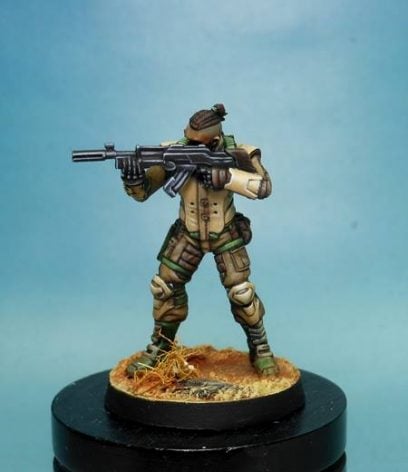 For cheap orders it has the Ghulams. At 12 points, these guys are versatile with a Rifle and Light Shotgun Combo that makes them impressive in close and medium ranges. Their BS is very average at an 11, but for 12 points that’s about what you can expect. Where these guys excel is in the WIP department sporting a truly impressive 14. For this reason I’d make one of these guys your Lieutenant. They’re cheap enough to sit in the back without being a waste of points, and they can still win you the first turn roll. They’re also ideal for the one point upgrade to Forward Observer. You could probably get away with proxying one of them as a Hacker or Doctor (which they’re also great at), but those are models I’d advise you buy anyway later so… you might as well just do that. 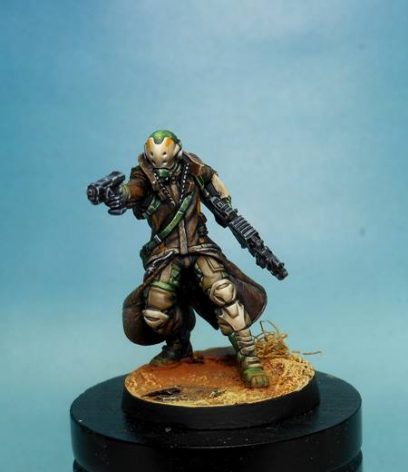 Let’s move on to the Zhayedan. This guy has a good set of skills and abilities but also comes with a price tag to match. 31 points (assuming you take the Breaker Rifle profile depicted on the sculpt) isn’t too much, but he only has ARM 2 to keep him standing. Sure, he does have an AutoMediKit, but it takes orders to use, only has about a 50/50 shot of success, and will kill him if he fails. Also your opponent can ARO against him when he tries to use it. Still, a Breaker Rifle and Marksmanship L2 mean this guy can dent some pretty hard targets without costing any SWCs. And Veteran L1 means he won’t have to go Irregular if your Lieutenant dies or freak out if your army goes into Retreat. 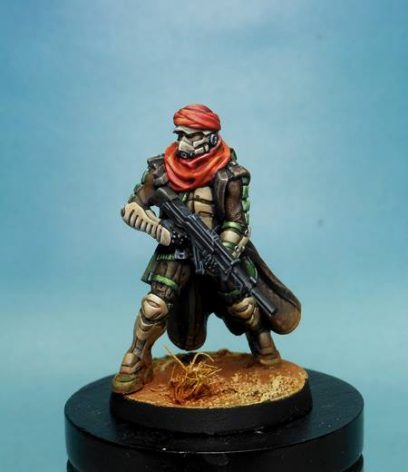 The Khawarij is an even stranger fellow with a peculiar list of skills and abilities. Poison isn’t bad to go with a CC of 20 and an AP CCW. Bioimmunity will also be useful from time to time. Religious Troop won’t hurt either, but none of these things are what makes the Khawarij special. His stand out ability is definitely Super Jump. It can help you move over terrain, or jump up from behind it and shoot “in midair.”

Super Jump is an ability that is as risky as it is powerful, since enemy models can declare AROs against Super Jumpers at any point during their “jump.” You’ll need to be very careful, or clear out a lot of models to make sure this guy can do his thing. On the other hand, without anyone to challenge him he can move across a terrain heavy Infinity table without spending too many orders. He also has a good PH so he has a decent chance of getting off Speculative Shots with his grenades if he is within eight inches. That means no AROs back at him, and with a little luck, you might even nail more than one model with a grenade shot. This guy will take more practice to get the hang of than the rest of the models in this set, but for 27 points he has some amazing potential. While he is listed as the Lieutenant in the Red Veil book sample list, I would never use him for this. It’s just too risky. 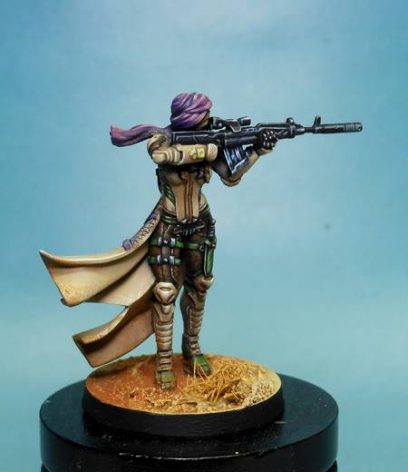 The Tuareg is another great piece. Tuaregs are the only CH: TO Camo models available to Haqqislam, so it’s good to get one in your collection right off the bat. With Infiltration she has a good command of the table so she can get a nice Surprise Shot off with her Sniper Rifle. She also has Mines which she can use to make it harder for your opponent to get around the table, or deter anyone from trying to get too close. An ARO with a mine is a lot scarier at close ranges than one with a Sniper Rifle. With WIP 15 she is pretty good at making Intuitive Attacks with them should the need arise. At 33 points she seems pretty reasonably costed for everything she can do. That’s not to say I haven’t been pondering an easy way to convert her into a Hacker, but that’s another discussion. 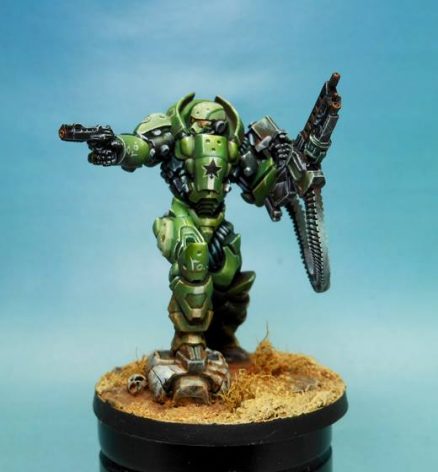 That just leaves us with the star of the show, the Al Fasid Regiment. I swear this guy has it all. He’s almost as tough as a TAG with ARM 5 and 2 W. Anyone trying to sneak up on him will be in for a nasty surprise if they get too close, since he has Sixth Sense L1. He also has a literal arsenal of different weapons at his disposal. The one you’ll probably be using the most is the mighty HMG with it’s magnificently high damage and burst. The Light Grenade Launcher is also useful if you need to make Speculative Shots. He even has mines. Top that all off with Veteran L1 just like the Zhayedan.

All in all it’s a great set of models. The Al Fasid and Ghulams will definitely continue to stay useful, but you may find yourself rotating the others in and out as you try employing new strategies. I agree with the general sentiment that there are no best lists in Infinity, so whether or not all these models remain 100% useful to you will depend a lot on what kind of playstyle you end up developing. Most Infinity players swap models in and out all the time as they tinker with new lists and strategies.

~Hope you enjoyed the article. I’ll be back soon to talk about how I would expand this list into a full-fledged fighting 300 points. If you enjoyed looking at the pictures of painted models, stop by the Studio Giraldez Facebook page where I found them.