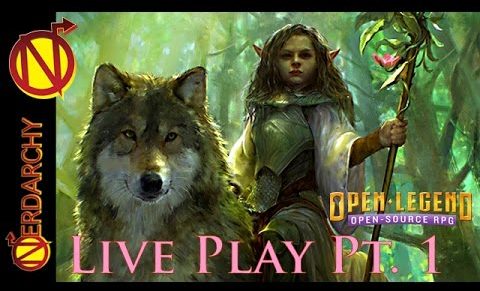 The guys from Nerdarchy try out the open source RPG – it looks like a lot of fun!

Open Legend is an open source RPG that was created by Brian Feister  and Ish Stabosz.

[It’s] is a streamlined system designed to let you tell big stories using small rules. The rules get complex when they need to, but never cumbersome, and wherever they could be cut out or simplified, they have been.

The ruleset really allows GMs and players to go wild with character creation and world building. It’s open source so you can copy parts of the rules and build on them however you want; you can also share and publish things you’ve made with the system.

For a more in depth look check out their website.

Let’s get to the game play, shall we?

If you find the folks of Nerdarchy as awesome as I do check out their Facebook page and official webpage.

If you’re digging how the game plays you can pick up the core rules here and an intro adventure here.

Open Legend has a Kickstarter campaign starting up on Tuesday, October 18th…

What do you think of Open Legend?