Today Loremasters we delve into the utter darkness of the Chem-master, Fabius Bile, mad apothecary of the Emperor’s Children.

“When a doctor goes wrong, he is the first of criminals. He has nerve. He has knowledge.” ~The Adventures of Sherlock Holmes

Fabius Bile is a Chaos Space Marine. Prior to the defeat of the Horus Heresy, he was a Lieutenant-Commander and Chief Apothecary of the Emperor’s Children. He is now an infamous mad scientist, specializing in genetic manipulation and the creation of Enhanced Warriors.

By the end of the Great Crusade, Fabius Bile had risen to Chief Apothecary of the Emperor’s Children and was known for his reclusive and inquisitive nature. As the Heresy and betrayal of the Emperor’s Children loomed, Fabius managed to convince Fulgrim that he could improve upon the Legion’s gene-seed and finalize their quest for perfection. To this end Fabius began experimenting on both Emperor’s Children and Blood Angels wounded or slain in the War on Murder. This began Fabius’ descent into corruption and madness, as his experiments became ever-more extreme.

Once the Heresy began and the Imperium became divided, Fabius Bile was held in high esteem by both Horus and Erebus for his skills in genetic research. Omegon was told by Horus to give Bile the stolen Data from the Primach project. However the Data Omegon gave Bile was purposefully flawed, so that the traitors would waste manpower and resources, while it would be impossible to gain any benefit from it. Later, Bile joined several Emperor’s Children commanders such as Lucius and Marius Vairosean in using extreme torture to exorcise the Daemon that was inhabiting Fulgrim. At his Primarch’s demand, Ferrus produced his first cloned Primarch, creating a replica of Ferrus Manus which Fulgrim tried to again convert to his cause and killing him after he refused. Bile created multiple clones of Ferrus, all refusing Fulgrim before being killed. Fabius proved vital for the Emperor’s Children during the Heresy, reviving both Eidolon and Lucius at the demand of their Primarch. As the war ground on his experiments became more and more depraved, torturing captive Space Marines of both allied and enemy Legions to give birth to his first generation of Terata.

During the end of the Heresy Fabius Bile took part in his legion’s attack on Terra, although neither he or his Legion were actually involved in the siege of the Imperial Palace; instead, they attacked the general population. In the Legion’s unrestrained fervour, millions of Earth’s civilians were murdered. Bile used the opportunity to perform horrific experiments on captives. Human victims were rendered down to create special drugs which heightened the Legionnaires’ feeling of ecstasy. It is possible that Earth served as the first example of Fabius Bile’s subsequent atrocious experiments on entire planetary populations. Bile left Terra before the death of Horus, along with a retinue of altered followers. Now, he is a renegade even to his own Legion. Unlike the rest of the Emperor’s Children, Bile does not follow Slaanesh, instead he devotes himself to science, and research into the creation of Space Marines. While he was still chief Apothecary of the Emperor’s Children, he began to secretly experiment into ways of altering the gene-seed at the instruction of the Primarch Fulgrim with the intention of further perfecting the Legion. These experiments led to the first examples of Noise Marines among other things. 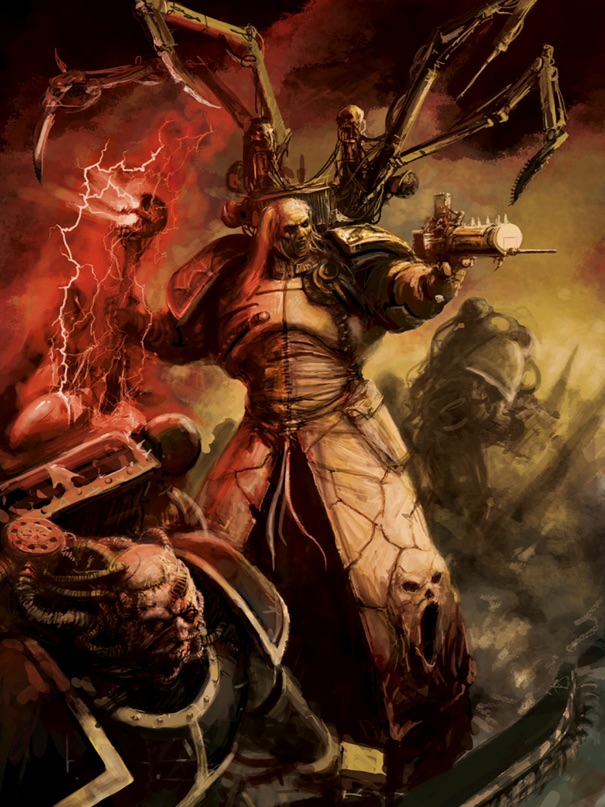 Yet for all his twisted genius, Bile could not hold back the furious crusade of loyalists that launched outward from ravaged Terra. Retribution finally caught him in the Arden System, where he was supporting the excesses of the renegade Lord Tyrell in exchange for foetal material. The Adeptus Astartes launched themselves down upon the corrupted world of Arden IX. Bile’s flesh refineries and cloning vats all burned in a single night as the righteous fury of the Salamanders Chapter incinerated all evidence of the Primogenitor’s precious experiments. Bile brought low a dozen Space Marines in the battle as his once-brothers died agonising and inventive deaths. Yet he barely escaped the battle. He was forced to flee for his life, and his ship was crippled by an Imperial Gothic class cruiser as he fled for the dubious refuge of the Warp. Whether by accident or design, Bile’s vessel was slowly drawn into the Eye of Terror. He drifted there for an age, constantly experimenting on those few acolytes he had left until the hand of some dark god guided his ship into the gravity well of a Daemon world. Once, the planet had been one of the scintillating jewel-worlds of the Eldar civilisation before their own debaucheries saw their civilisation torn apart. Now it was a shrivelled ruin, a crone world of seething madness that echoed to the screams of souls long dead. To Fabius Bile, it became home.

Bile went about continuing his work from before the Heresy, attempting to unravel the secrets of gene-seed and the Emperor‘s science in creating the Primarch’s. To that end, Bile continued to clone Primarch’s as he had Ferrus Manus earlier. After capturing Horus‘ body on Maleum, Bile created his first true clone but this confused creature was killed by Abaddon in the Battle of Harmony. During the same battle, it was revealed that Bile had attempted to clone all twenty Primarch’s from samples he had gathered over the ages. The result however were a collection of adolescent monstrosities and deformed creatures, which were all subsequently wiped out by Abaddon and his forces. Annoyed, Bile stated that Abaddon had set his work back considerably before retreating.

In the centuries following the Heresy, he traveled the galaxy offering his services to various planetary warlords or rebel leaders, in return for prisoners or ancient technical libra. Many of these ambitious overlords came to regret allowing Fabius’s experimentation’s on their people, as the results of his atrocities became apparent.  For a time, he was tutored in the dark arts of manipulating the flesh in the Tower of Flesh, a Haemonculi stronghold of the Coven of the Thirteen Scars. This eventually led to him tutoring his fellow Emperor’s Children in these dark arts, which led to Bile coming into conflict with the Thirteen Scars. The Coven slaughtered those who Bile tutored, and surgically ensured that Fabius himself could never speak of what he had learned.  He was nearly caught by the Salamanders chapter in the Arden system and has now set up base on one of the Eldar Crone Worlds within the Eye of Terror. He has forged alliances with the various Chaos Space Marine legions and promises to give them warriors to replenish their forces in return for protection.

Fabius styles himself ‘Primogenitor’, claiming he has unlocked the secrets in the creation of the Primarchs and the Space Marines. This is possibly due in part to the Raven Guard‘s research on the Primarch genetic code, which was stolen by Alpha Legion operatives. The pinnacle of his foul art is the “New Man”, creatures who possess strength and intelligence superior to any human, as well as the worst traits of mankind. As Fabius leaves behind planets of corrupted human abominations, the Adeptus Astartes and the Inquisition strive to purge these creations, and are forced to destroy entire populations.

He experiments on himself just as readily as on any of his victims, resulting in vast variations on his strength and other abilities. His experiments on others bring uncertain results. Sometimes the experiment is a success, creating psychotic killers, superhuman even in comparison to their corrupted Chaos brethren, sometimes the subject’s metabolism disintegrates in the face of the stress, resulting in instant death. 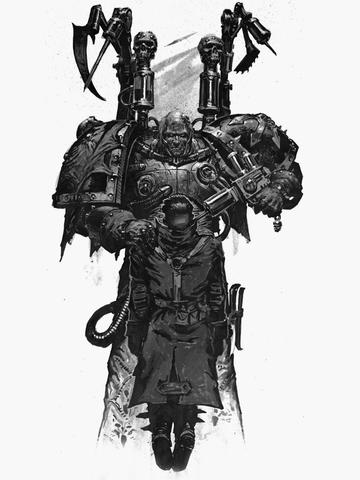 In addition to his already impressive augmented physiology, Bile is equipped with the Chirurgeon, a warp-tainted mechanical device attached to his spine. It pumps daemonically charged black ichor around his body giving him unnatural resilience. Spidery limbs tipped with vicious saws, blades and other twisted variations of medical devices extend over his shoulders, which act as both the tools of his experimentation and a means of attack.

He is also equipped with the Xyclos Needler, a gun that fires virulent poison darts and the daemon-forged Rod of Torment which when it strikes, is able to incapacitate almost any enemy with unbearable pain.

“Unlike you, whelp, I once walked the same ground as your idol . I breathed the same air as him. And I tell you this, without lie or artifice. He never wanted to become what you have made him! He did not wish to be your god-thing. He abhorred such ideals! The slavery of your crippled, blind Imperium would sicken him, if he had eyes to see it.” ~Fabius Bile

~More villains of the Grimdark in the days ahead.