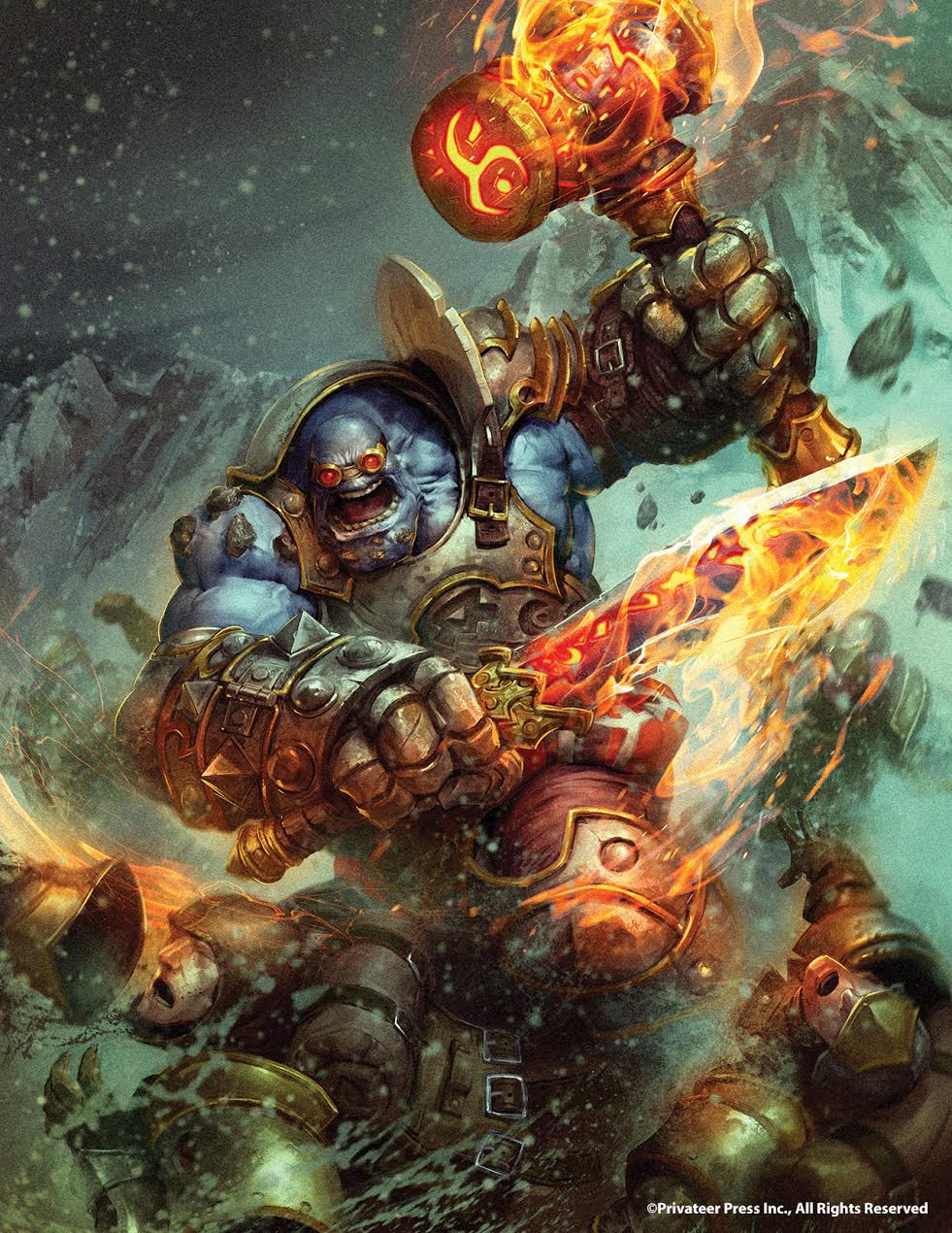 The troll journeyman becomes a caster in MkIII – check how his look has changed.

In a recent Privateer Press Insider Mike Vaillancourt discusses the design process behind Horgle, the Anvil.

Concept artist Andrea Uderzo was tasked with updating Horgle’s original design, taking him from a journeyman warlock to a full-fledged ’caster. Our written description for this iteration of Horgle requested the following changes and additions:

-Horgle’s new look should represent a transition from a magic-using tradesman to a more prominent military leader. He should have a little more armor and fewer of the trappings of his trade as a blacksmith.
-Horgle is armed with a pair of melee weapons. These could be based on his original weapons or be all new. These are magical weapons that radiate with heat. They should be primarily made of metal.
-We need two poses for this model, a soft plastic version for the army box and an alternative metal version.

Andrea sent the following sketches, which all had elements that we liked: At this point we decided that Horgle didn’t quite have the feel of a warlock yet in any of the sketches, so we began mixing up the bits we wanted, taking into account any production concerns and considering ways to give him the most visual impact on the table. In discussion we settled on the following figure elements and additions:

I then sent that feedback off to Andrea with some quick sketches to help illustrate additional ideas, and I received this back: The fire didn’t feel intense enough, so we requested further emphasis to the flames on his sword and hammer . . . . . . And we received back this rough sketch, with plenty of swoosh and a tool bag, to test out the look: This looked good, but something was still missing and didn’t feel right. I then requested that Andrea remove the tool bag and place Horgle’s tools on his belt, like in Rough 1. I also asked Andrea to give Horgle a pauldron on his left shoulder (at the viewer’s right). Andrea promptly added that piece of armor and produced a quickly revised sketch of the back for placement: We gave our approval to proceed to final, at which point we received this: If you’ve seen any of the previous concept art Insiders, you know the last step in this process before modeling and illustration is that I establish the paint scheme and color the concept art for the artist’s reference: What do you think of the iterative design process of Privateer Press? It’s a great look inside how they develop their models!