The New White Dwarf focusses on Fracture of Biel-Tan and here’s the latest info:

Following  up on today’s Formations, it looks like someone on Facebook with a copy of the French White Dwarf is talking.  Here’s the latest info doing the rounds: 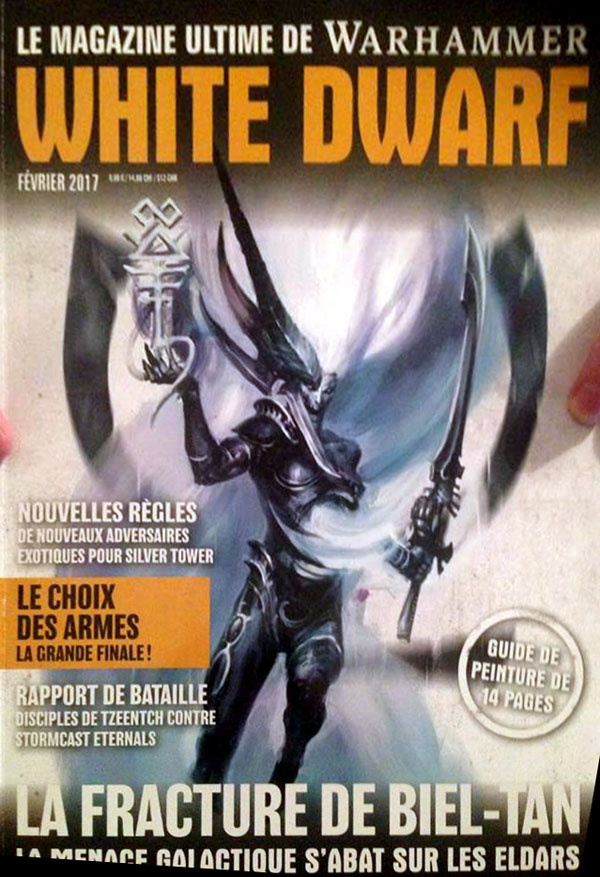 -Aeldari are a thing

– Drukhari are also a thing. Looks like its referring to Dark Eldar ~Editor’s note: So very close to the old WFB name for the Dark Elves

– There’s something called the Exhumed who can harvest the power of soulstones to use as weapons and amplifiers. They basically call to the spirits within them to vaporise folks and to buff their psychic powers.

– Seems like the Exhumed follows Ynnead, and wants the Eldar to follow suit. They want to restore Eldar society to how it was before the Fall. The problem is that they are really arrogant about it, so they tend to be treated with hostility.

– Yvaine (she’s the chick, right?) can take souls and “share” them with those around her. It gets a bit hard to read, but I think it says that these souls can manifest as spectres, or she can channel them (she gets possessed, in other words). The Ynnari see this as a divine miracle. This is from the Ame Partage (Shared Souls) section on the side, in the very small print that’s a pain to read.

The formations we have seen clearly point to a unified Eldar race with Craftworlds, Dark Eldar, and Harlequins unified.

It would appear the survivors from the end of Fall of Cadia are in for a fun time – we seen Scions fighting alongside Eldar versus Chaos in that top image.

NOTE: There is a lot of uncorraborated REALLY SALTY stuff in that Eldar facebook thread regarding Fracturing of Biel-Tan. We won’t comment on that as it isn’t supported by anything physical.