The Lord-Aquilor is coming to town on his majestic Gryph-Charger to smite the foes of Sigmar – come see the new plastic kit!

If you’re looking for a fast, hard-hitting new Hero to run with your Stormcast Eternals then the Lord-Aquilor is the one for you:

Let’s talk rules for a moment – The Lord-Aquilor is the perfect Hero if you’re looking to run the new Vanguard-Palladors because of his Command Ability: 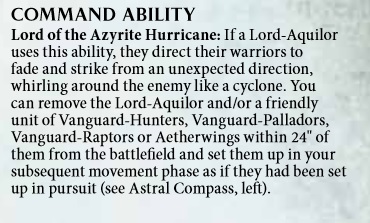 This ability is pretty bonkers just due to the movement shenanigans. While you do have to remove the unit(s) for a turn, it’s a fantastic way to bait your opponent to one side and them quickly redeploy them to a different side. The only restriction is “wholly within 6″ of any edge of the battlefield, more than 7″ from the enemy.” Considering their missile weapons typically have at least a 9″ range they can pop in and unload as well. It’s also useful for the Vanguard-Hunters as well. Plus with that massive 24″ range of unit selection you’ve basically got a 4′ bubble to choose from. Have fun with that!

And speaking of fun, I want to talk about building this model for a moment because it’s ridiculously easy. It was an absolute breeze to build. Games Workshop’s plastics are (still) super easy to work with. I’ve said this before and I’m sure I’ll say it again: the cuts on this model to put it on the sprue is technically superior to the competition. When you’re building this model, if you follow the instructions in order, everything should just sort of fall into place. Then, when you’re done, I would challenge you to try to spot the cut lines…they are that well hidden.

Overall, this model looks great, is easy to build and has some crazy rules to match. I have a feeling Games Workshop is going to have a winner on it’s hands. The hard part now (for me at least) is not screwing up the painting… 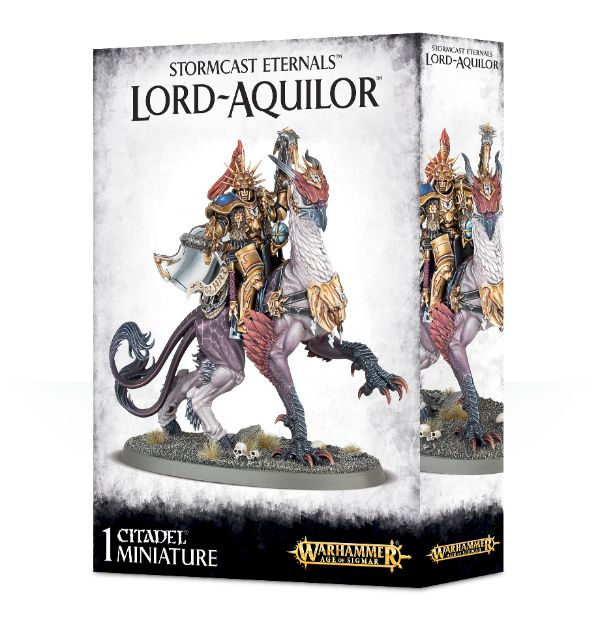 Commanders of the Vanguard Auxiliary Chambers, the Lord-Aquilors are masters of the hunt, tracking their foes across the Mortal Realms as they ride the winds aetheric. When the foe is cornered, the Lord-Aquilor will strike with their starbound blade, channelling their hatred of the enemies of Order into every blow as their Gryph-charger savages the opponent with beak and claws.

This multi-part plastic kit contains the parts necessary to assemble a Lord-Aquilor, mounted on a Gryph-charger and armed with a starbound blade, shock handaxe and heavy boltstorm pistol. He comes with a choice of bare or helmeted head, and a selection of accessories – a rope, grapple and bed roll – that can be used to decorate the Gryph-charger’s saddle. A magical astral compass can be attached to the pommel of his saddle. 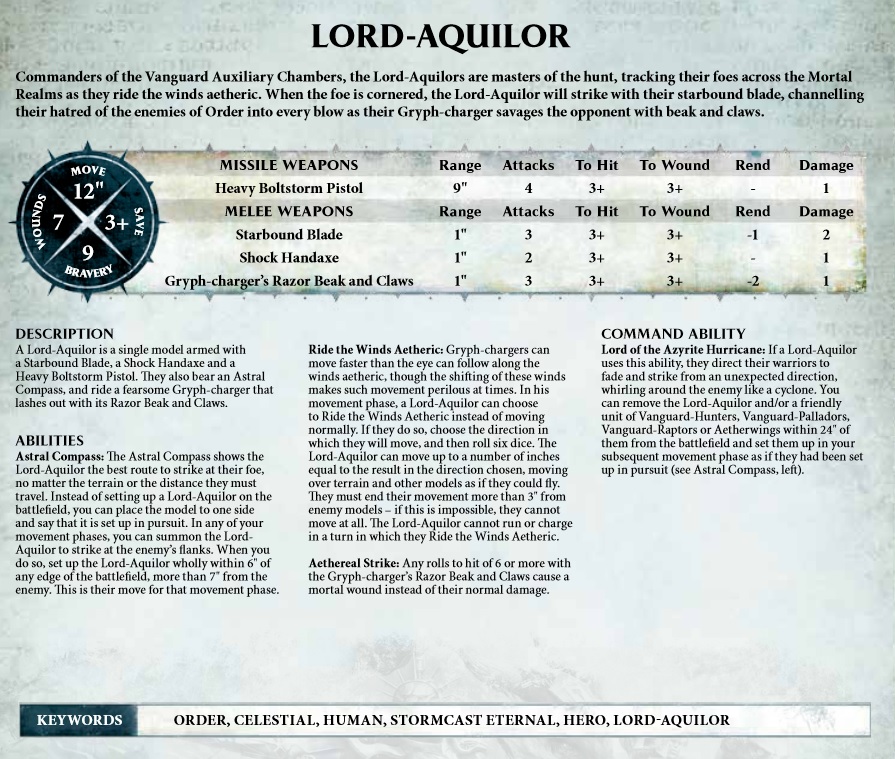 Ride the Winds and unleash the fury of Sigmar on your foes! The Lord-Aquilor hits shelves this weekend!