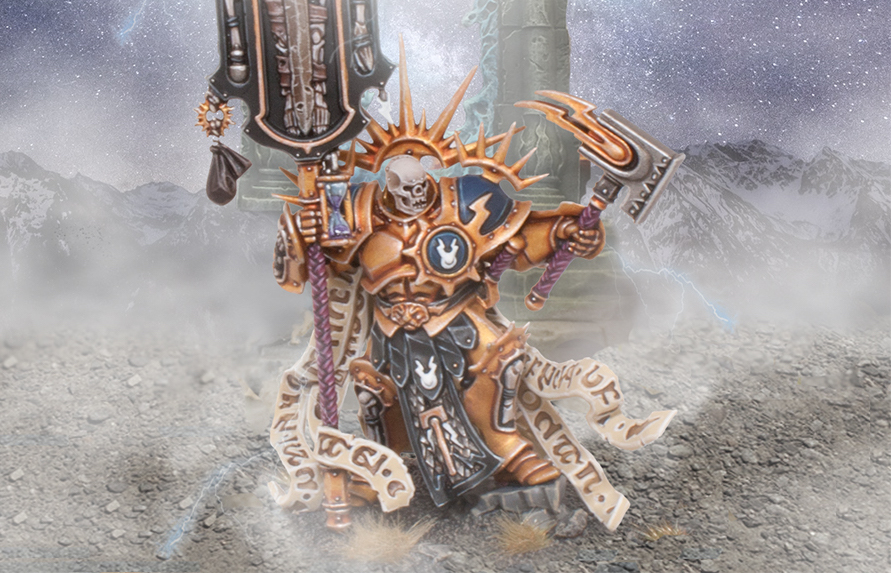 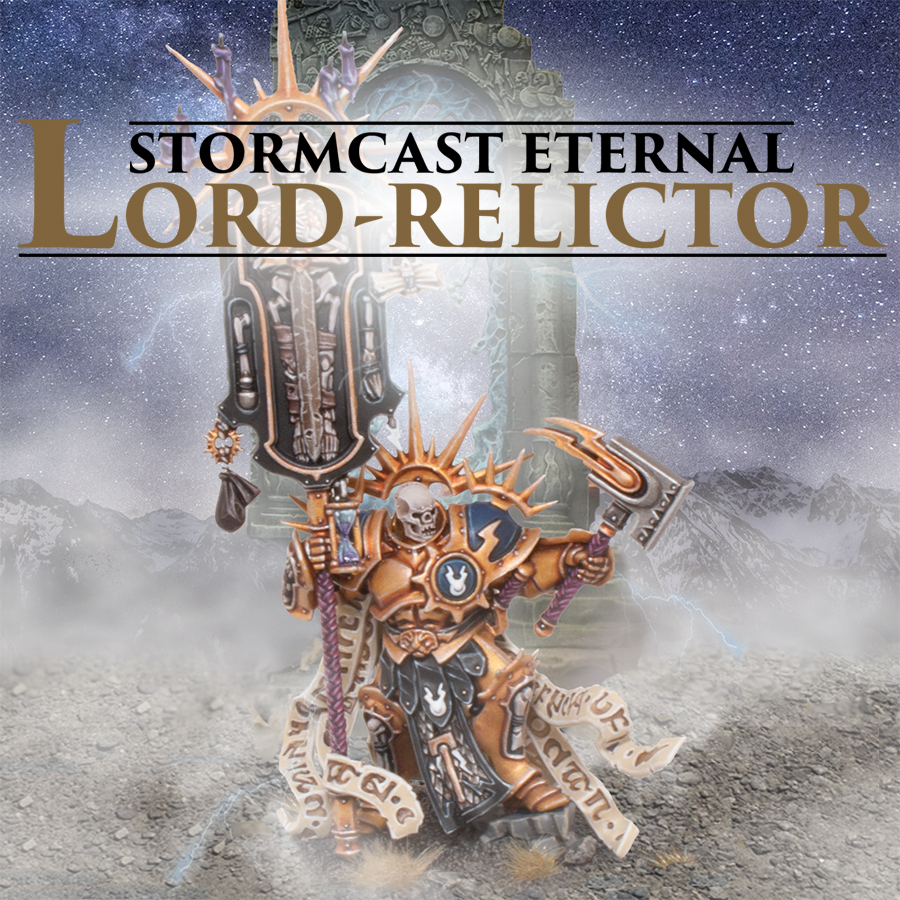 My Stormcast army seems to be one of those super slow burn projects. I bought the starter set on release and originally intended it to be a fairly quick army, but after painting my first unit I knew it was going to take a bit longer then I originally intended. The last unit I finished for them were the Prosecutors back in August, so it’s been quite awhile. Painting a character was a nice way to get back into the swing of the color scheme and puts me a little bit closer to my first 1,000 point goal. 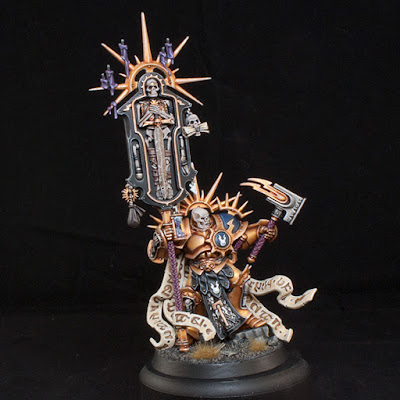 I painted the models in subassemblies to make it easier to get to everything. I did the same thing with my Lord-Castellant, and imagine I will have to with all of the Stormcast heroes. On the Relictor I left the cloak of parchment and the banner off as separate pieces. This also let me prime them in different colors. The main body was primed with Retributor Armor, the cloak with Corax White, and the banner with Black. I painted the armor in the same way as all of the other Stormcast, which you can find a tutorial for here. I looked at the official ‘Eavy Metal model for most of my color choices on him, hence the black tabard and such. The blue is Kantor Blue, shaded with a Kantor/Black mix in the recesses and highlighted by mixing in Screaming Skull to the Blue. The black is just Abaddon Black highlighted with Dawnstone followed by Adminatratum. I also mixed in a little white for the brightest highlights on the corners of stuff. The leather is Screamer Pink shaded with Nuln Oil, tidied up with Screamer Pink again and then highlighted by mixing in Screaming Skull. 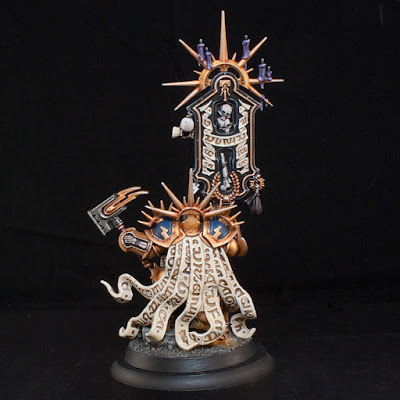 One thing I did change though was the color choice for the bones. I was already painting the parchment with Ushabti Bone as the main color, so I wanted the actual bones to look different and stand out. I used Rakarth Flesh as the base color and shaded it with Agrax Earthshade and highlighted it by mixing in white. This required a bit of blending on the flatter surfaces, like the skulls, but it wasn’t too hard. I thought the parchment would be a pain to paint, since there’s so much of it, but it ended up being fairly easy to do. To help with this I broke it up a bit. I painted the parchment on the body, the cloak, and the banner all separately to completion so I didn’t get bored or frustrated with how much there was to do. The hourglass was a lot of fun to paint and I did it a bit differently then how I did on my Castellant. I would like to say that was on purpose, but part of it was just because I wasn’t looking at the Castellant while I worked on this guy. I do like how it has more contrast though and is not as bright. 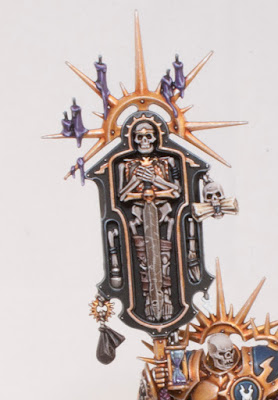 Painting the banner was a bit of a pain because there was no easy way to hold it or pin it to something while I painted. This meant a lot of paint got rubbed off on the corners as I handled it. I just waited until it was all done and glued onto the rest of the model before fixing those areas. I also had to use a bit of greenstuff to hide the join on the parchment that wraps around the banner pole. I just painted this the same as the rest of the parchment once it had dried. I decided to paint the candles on his banner purple instead of red or white. This is because I plan on changing the spot color on my Stormcast from red to purple to match the Tidalborne warrior chamber I write about for the Endless Deserts. That means I will have to go back and repaint the plumes of the models I already have done, but I think it will make my army a little more unique. If you’ve read my Tides of War story then you’ll already be familiar with this Relictor, Gallous Cairnwalker.

I’m really happy with how he turned out and he only took me about a week and a half or so to paint. Next up I have a unit of Judicators and, I think, the Palladors to paint to reach my 1,000 point goal. I’m probably going to paint up something from a different army in between to break it up a bit though. The Stormcast take a lot of time and effort to paint. Also, so much gold.