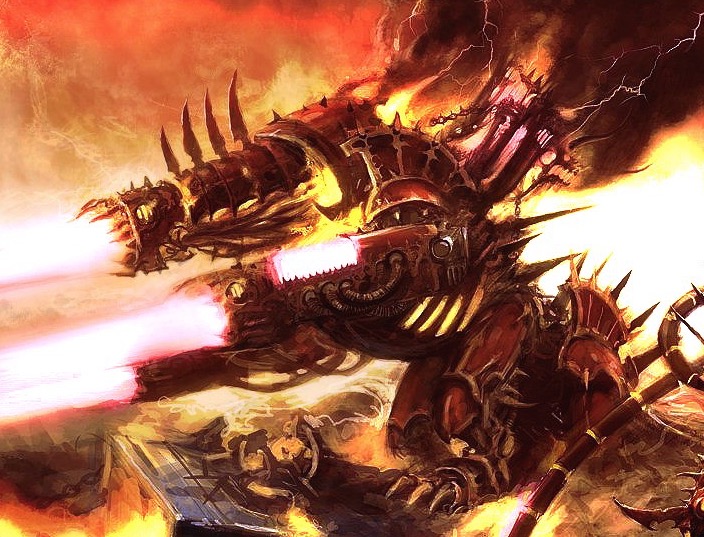 Today Loremasters we speak of the vile constructs of the Dark Mechanicus – the Daemon Engines of Chaos.

A Daemon Engine is a part-technological, part-daemonic vehicle employed by the various forces of Chaos.

Daemon Engines can vary greatly in form and function, but they are unified by one factor – the physical shells of the vehicles contain bound Daemons which control their actions. Daemon Engines have an insatiable bloodlust and revel in violence and destruction. Often they will destroy anything that lies in their path, regardless of allegiance, and so must be chained up until they can be unleashed upon the enemy. Like all entities of the Warp, Daemon Engines exude an aura of death and hatred that can overwhelm a lesser man. Untainted humans near one of these beasts often fall to their knees in horror and the demons presence fills their minds.

Creating a Daemon Engine requires that the entity be summoned by one who has knowledge of such things, such as a Chaos Warpsmith, sorcerer or priest. The Daemon is summoned into the hull of the machine so that the corruption spreads throughout its circuits, gaining complete control of all functions. 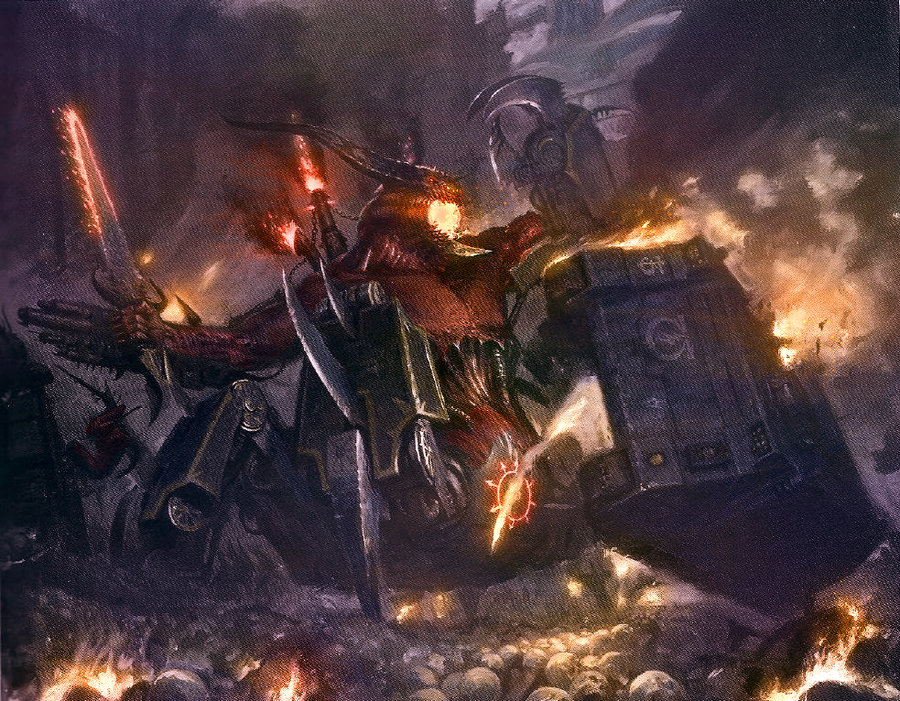 In daemon armies, the Soul Grinder plays a role roughly equivalent to that of a battle tank in conventional armies. It is well armoured, appearing as a six-legged construct with a roughly humanoid upper body. There is a passing resemblance to the Chaos Defiler, but the background states that Defilers were commissioned by Ezekyle Abaddon while Soul Grinders are from the Forge of Souls. Soul Grinders possess impressive durability, firepower, and strength compared to the rank and file daemons.[Needs Citation]

In the ash plain outside the Forge of Souls, daemons battle each other for the chance of fusing with the mechanical constructs of the daemonic smiths. This is because, unlike mortal bodies, these steel and ceramite shells can sustain a daemon in realspace almost indefinitely. Before being released, each new Soul Grinder must take the Three Oaths of the Iron Pact with the Masters of the Forge: 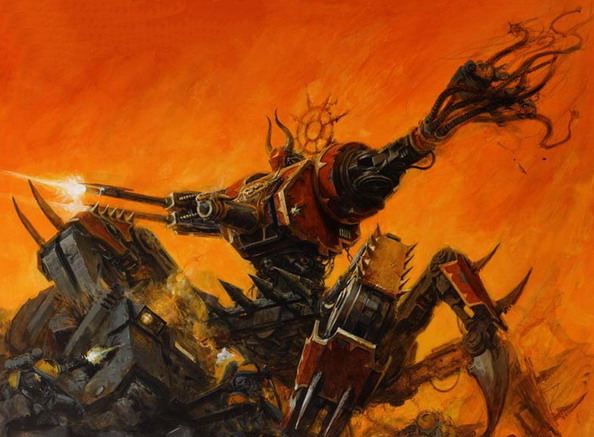 The Defiler is a Chaos Daemon Engine and are among the most common of their kind. They were created by the Dark Mechanicum on the Forge World of Xana II at the command of Abaddon the Despoiler in preparation for the First Black Crusade. Standing on six piston-driven limbs, the Defiler’s hull supports a massive turret, which houses the main armaments of the infernal machine. While Defilers are usually seen with large arrays of weapons, such as a Reaper Autocannon and a Havoc Launcher, its main firepower comes in the form of a battle cannon. There are often variations of the weapon systems used; in some cases, Reaper Autocannons have been upgraded to house twin-linked heavy bolters or lascannons instead, whereas there have been sightings of Defilers with heavy flamers on multiple occasions.

In addition to being able to lay down a barrage of heavy fire, Defilers are also terrifying close combat opponents. When a Defiler arrives on the battlefield, the magic keeping the bound daemon peaceful are released, allowing the daemon to truly enjoy the battle. As daemons are immortal and unconcerned for the survival of its machine host, Defilers ignore hits that would kill normal tank crews and continue on rampages of destruction that would otherwise be impossible to proceed with. 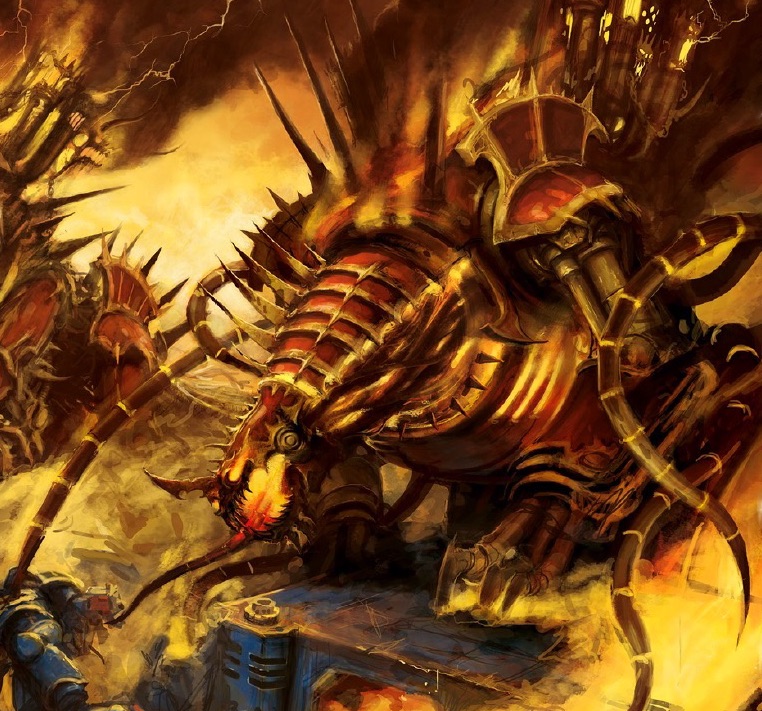 The Maulerfiend is a type of Daemon Engine used by the forces of Chaos. This disturbing fusion of Daemon-beast and heavily armored machine is designed to attack enemy forces in close combat with gruesome melee weapons as opposed to its cousin, the Forgefiend, which is designed for long-range combat. Maulerfiends can rip apart the strongest armored targets or toughest defenses with a combination of Power Fists, Magma Cutters, and Lasher Tendrils. A Maulerfiend is powered and fulled by the rage of the Daemon that inhabits it, and this amplifies its melee weapons.

Maulerfiends are extremely agile and nimble for creatures their size, having the ability to climb steep walls. This has given them the nickname of Stalker-Tanks and Scalers. Worse still, they are able to lock onto the scent of a victim, allowing them to hunt the enemy over a great distance. However rather than a hunter, most Maulerfiends serve their masters as daemonic battering rams that crash into enemy lines. Once a Maulerfiend has latched onto an enemy war machine or fortification, it will find even the smallest weak spot to exploit in its armor before crushing or cutting it to bits, allowing them to rip apart the vulnerable individuals or components within.

The Forgefiend is a type of Daemon Engine used by the forces of Chaos. This disturbing fusion of Daemon-beast and heavily armoured machine is designed to attack enemy forces from afar with overwhelming firepower as opposed to its cousin, the Maulerfiend, which is designed for close combat. Upon the Forgefiend’s back is a assembly of soul-furnaces which contain the tortured screams and faces of its victims.

Forgefiends are created by either a Warpsmith or Sorcerer, who coax the spirit of a Daemon from the Warp to possesses the body of a machine, powering it with its fury.

The Forgefiend is typically armed with either up to three Ectoplasma Cannons or two Hades Autocannons. Forgefiends do not fire normal ammunition, for even their bullets are tainted with daemonic essence. Moreover, they can reload and create new ammunition internally by feasting upon nearby metal. 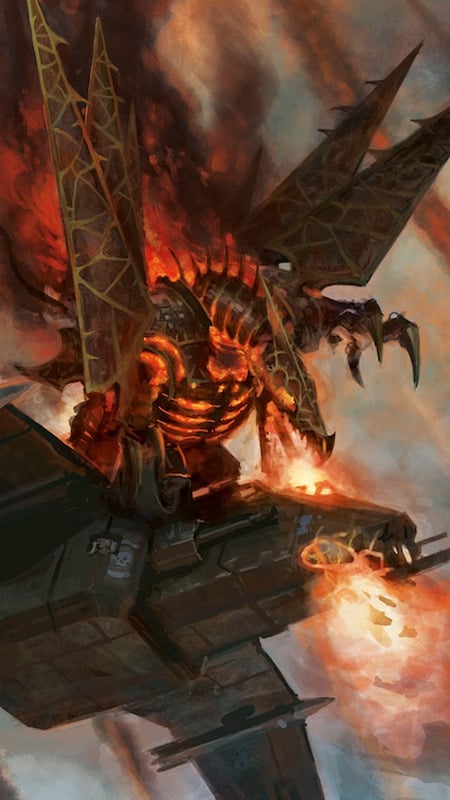 A blasphemous fusion of man, machine, and daemon, these fell creatures of Chaos have enormous wingspans that make them even larger then Stormraven Gunships. Once fighter aircraft flown by noble Space Marines, these have since been mutated by the powers of the Warp into something far more hideous. Their original pilots are still inside, fused to their machines for eternity, and it is their anguish and hate that powers adds to the feeling of “wrongness” that a Heldrake gives. After centuries of gradually fusing to their machine and becoming overcome by the Daemon that inhabits it, in the end the pilot is only a fetal ball that burns deep within the core of the aircraft. A crude hierarchy admits among Heldrake swarms, with the most powerful and experienced entities commanding their followers through pack dominance.

Heldrake’s are often the first wave of any full-scale Chaos Space Marine invasion. Fully capable of traversing space, Heldrake’s will often cling to the underbelly of Chaos warships like a swarm of bats, feeding off the vessels energy through cables and pipes. Sometimes, Heldrakes will claim areas within warships for themselves, daring any to come oppose them.

A Heldrake’s preferred method of attack is to soar from high altitudes down upon unsuspecting enemy air support, ripping them to pieces with their claws, cables, and talons.eldrake’s carry ranged weaponry in addition to their talons, usually mounting either a Hades Autocannon or Baleflamers, which spew daemonic bullets and fire.