What started out as a lopsided campaign has slowly turned into a real contest of wills. For 3 straight weeks the Imperium held off the Chaos invaders, but in week 4 Chaos pulled a victory to make it 3-1. Now, at the end of week 5, they have manged to bring the score even closer with another win putting the campaign at 3-2.

Drenthal has been claimed in the name of the Ruinous Powers. Oceans turn blood-red as butchered corpses bob and float upon the surging tide, while Daemon-forged drakes whirl and screech overhead.

Looking at the results, the Chaos margin of victory was razor thin looking at the overall campaign progress. Check these screen shots out: 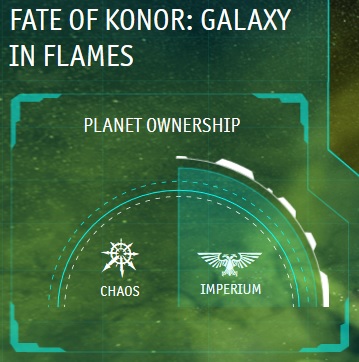 Drenthal was split right down the middle in the Planet Ownership graph, but that’s the thing – it’s not showing you just how close it really was. Look at the region specific maps: 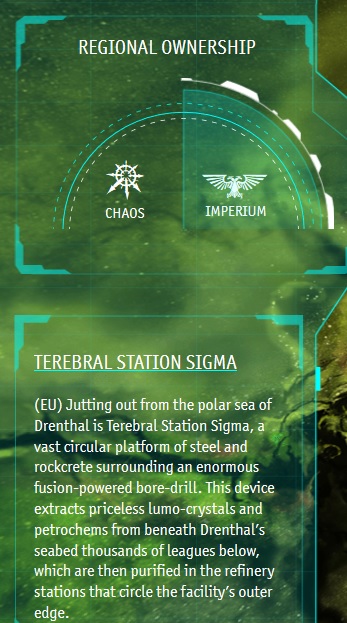 The EU was pretty much right on the line. 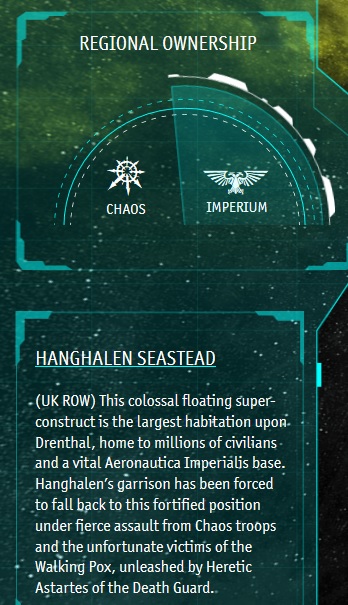 The UK actually had the Imperium in the lead – but it’s just one “tick” over. Again, VERY close! 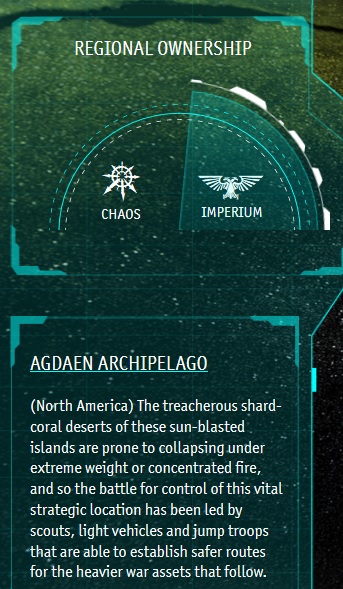 In North America, we had the opposite results of the EU with one tick over in favor of the Chaos Forces. Again, it looks extremely close! With over 127,000 games reported in total for the campaign in 5 weeks, it’s making me wonder just how narrow that margin really is! I’m also curious about how wide those margins of victory are per region. If the EU was tied 50/50 and the UK was at 51/49 was NA closer to 48/52? Was that enough to tip the scales in favor of Chaos? It looks like it really was that close! 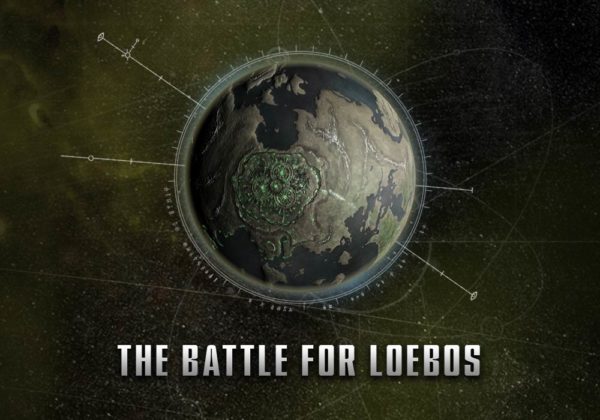 Loebos was once an Aeldari Exodite world, until an Imperial invasion slaughtered the populace and rendered its world spirit violently insane.

As the war in the Konor System reaches its crescendo, dire vox reports filter in from the far edge of the region. The death world of Loebos hurtles across space like an enormous wrecking ball, trailing a vast cloud of spore-ridden asteroids and noxious gases. This is Mortarion’s final gambit for the conquest of Konor – a world weaponised, powered by continent-sized engines and the fell power of the warp. If Loebos’ furious momentum is not stopped, the system-wide war still raging will be rendered irrelevant. The death world will barrel through the system like a plague comet, trailing corruption and death in its wake, infecting world after world with Nurgle’s pestilential gifts.

The final battle is over the planet of Loebos. This week’s theme is Terran and Lords of War. We just talked about some of the pros and cons of Lords of War in games and now we’re expecting to see them pop-up a TON this week. Let’s check out the mission: 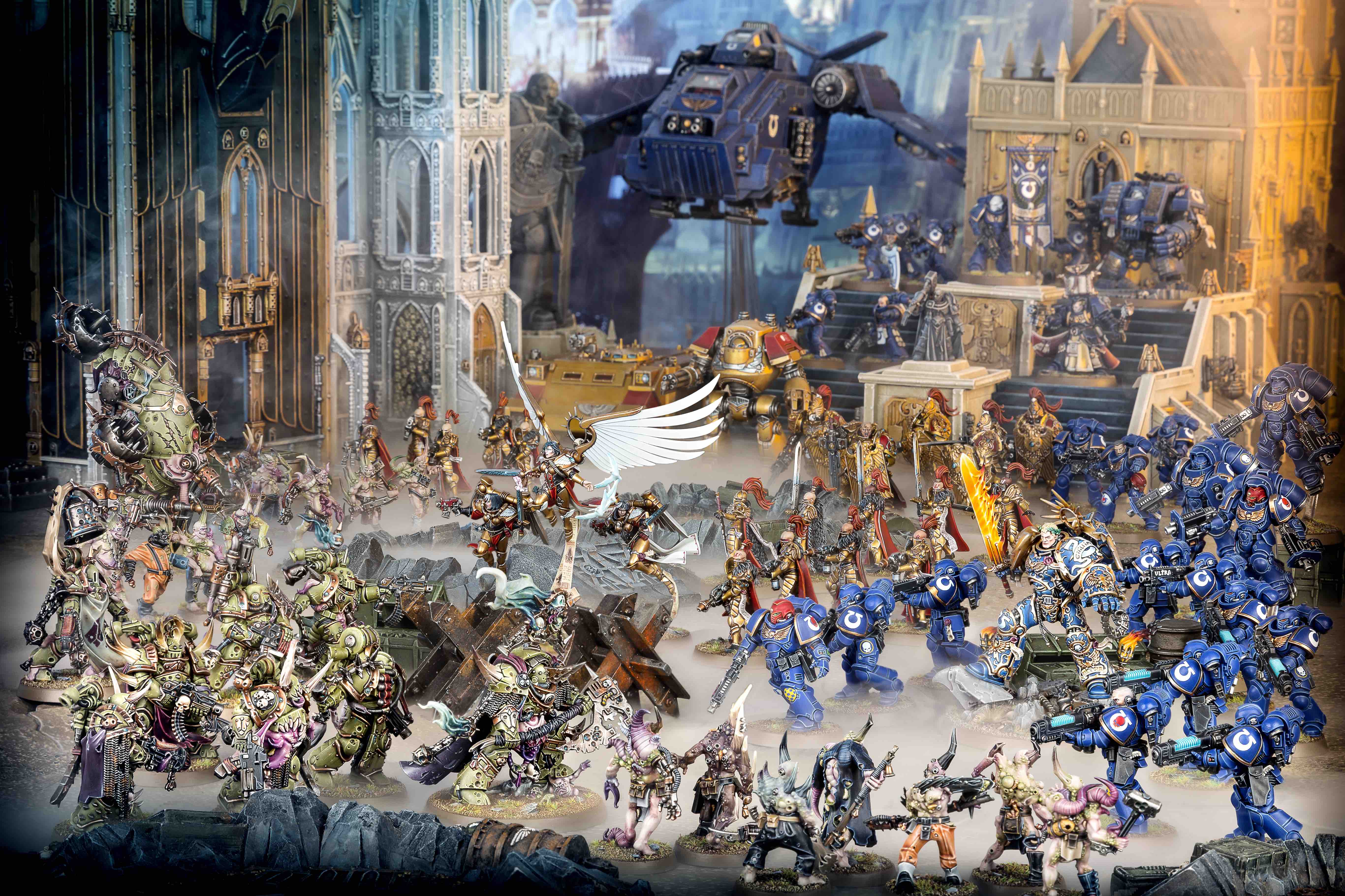 Week 6 Mission: Death of a World 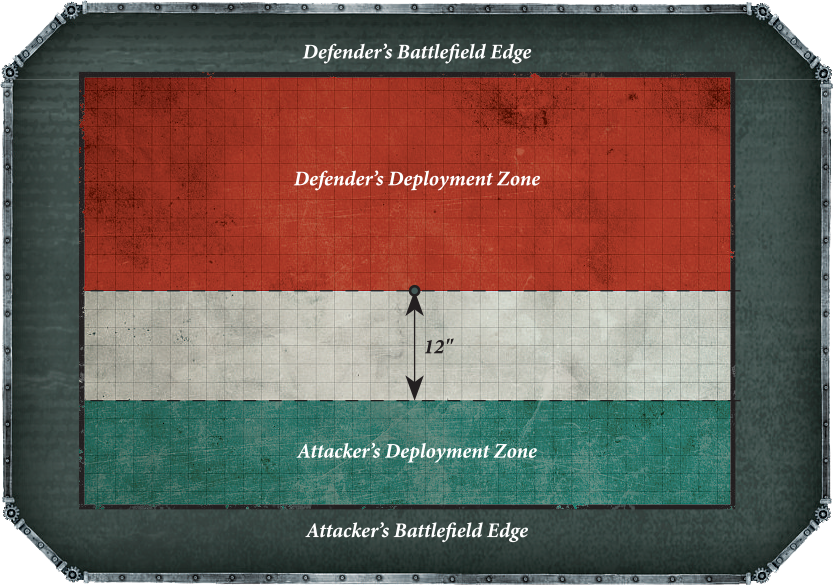 The ranges of any battlefield effects caused by Deathworld Forest terrain are doubled. For example, roll a D6 each time a model moves within 6″ (instead of only 3″) of a Barbed Venomgorse terrain piece whilst Advancing or charging – on a roll of 1 or 2, that model’s unit suffers a mortal wound.

Use this Stratagem at the start of your Shooting phase to remove a single Deathworld Forest or Citadel Wood terrain piece that is within 6″ of an INFANTRY unit from your army from the battlefield.

Use this Stratagem at the end of your Movement phase to summon a NURGLE DAEMON unit to the battlefield. The cost in CPs depends on the type of unit you wish to summon: 1 Herald of Nurgle, a unit of 1-3 Nurglings or 1-10 Plaguebearers costs 2 CPs; a unit of 11-20 Plaguebearers or 1-3 Plague Drones costs 3 CPs. Set up the unit anywhere wholly within 6″ of the Defender’s battlefield edge that is not within 9″ of any enemy models. Note that in matched play games, a unit summoned in this manner is free, so you do not need to spend reinforcement points on them before the battle.

This one sounds like it’s for ALL the marbles folks – The Planet Loebos has been flung across the system and will infect the entire system with Nurgle’s pestilence. On top of that it could also be used to slam into another planet causing a cataclysmic event! Will the forces of the Imperium be able to stop the planet in time? Will the Forces of Chaos strike a final blow and destroy the Konor System? You’ve got a chance to impact the game’s story by playing this week.

It’s coming down to the wire – place your bets!