Today brings tidings of the most glamorous of the Heretic Astartes: The Emperor’s Children.

Beware fellow loremasters. Our journey into the heresy-filled reaches of history continues apace today. We ha e recently learned of the martyrdom of St. Helena, and the loss of an important world at the hands of Lord Abraxis, a servant of Slaanesh and lord of the Emperor’s Children.

To this fallen chapter we turn our gaze, that we might learn their heresies and better combat these noisome foes in the  name of the Emperor.

The Emperor’s Children were the III Legion of the twenty original Space Marine Legions, also known after their fall as the Lords of Profligacy. Their Primarch is Fulgrim. One of the nine legions that betrayed the Emperor during the Horus Heresy, they became Chaos Space Marines. They worship the Chaos god Slaanesh and are hedonistic psychopaths who live for experiences of excess.

The earliest recruits to the Emperor’s Children, then known as III Legion, were recruits gathered from Europa during the Unification Wars. Noble houses, such as House Loculus of Komarg, selected the finest of their youth and gave them to the Emperor following their defeat by his Thunder Warriors as tribute for their previous defiance. Following the Houses of Europa’s lead, other noble Terran dynasties also sent their children to fight in the III Legion. This was rumoured to be the source of the Legion’s adopted name, the Emperor’s Children, a name that was re-affirmed later following Fulgrim’s rediscovery.

One distinction with the early days of the Emperor’s Children was that they willingly cooperated with and even led the young Imperial Army into battle, something other Legions saw as disdainful. Perfectionists even before having been reunified with their Primarch, the III Legion became known to efficiently execute and exceed the Emperor’s own expectations. The Legion was frequently given diplomatic and emissary-protection missions by the Emperor and were known by some as His heralds, the marines painting their armour imperial purple to signify their mission, emblazoned with a thunderbolt and rayed sun. 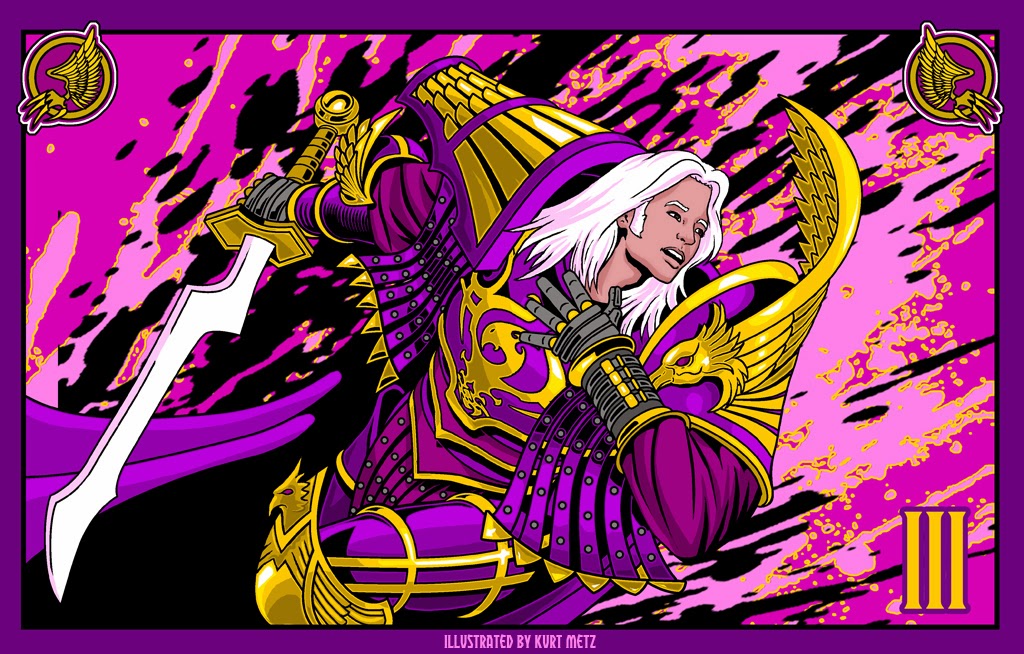 Before they fell to the ruinous powers, they fulfilled an important function. They should serve as a warning to us all about complacency.

The Legion was struck with disaster when it was found that a Selenite plot had corrupted gene-seed stock held on Terra with what was known as ‘the Blight’, causing organ degeneration that then spread more widely in the Legion. Rapid deployment of reserves, purging the infected, and the establishment of methods such as salvaging Progenoid Glands from its dead warriors helped to reverse the decline, but the Legion never recovered from this incident, and thus were always among the smallest of the Legio Astartes. While other legions such as the Ultramarines, Imperial Fists, and Luna Wolves all exceeded the 100,000 mark, the III Legion numbered only in the hundreds.

Following his rediscovery on Chemos, Fulgrim was placed at the head of his Legion. Fulgrim addressed the mere 200 Marines upon their first meeting, stating that they would go out into the Galaxy and spread the wisdom of the Emperor. “We are His children,” the Book of Primarchs relates he told them, “Let all who look upon us know this. Only by imperfection can we fail him. We will not fail!”

This wish to achieve perfection met its martial zenith during their first major campaign since parting with the Sons of Horus, the Cleansing of Laeran, where the Emperor’s Children met an alien foe that offensively echoed their ideals. The Laer were judged so formidable by the Adeptus Administratum that it was feared any attempt to subjugate them would take over a decade. The Emperor’s Children scoured them from their home-system in a month. This titanic effort was a notable feat of arms perhaps achievable only by Fulgrim’s legion.

hen the events that led to the Horus Heresy erupted, Fulgrim rushed to the Warmaster’s side, attempting to reason with his old friend. Instead, Horus seduced him, playing upon his love of flawlessness to weaken Fulgrim’s loyalty to the Emperor. Although Fulgrim initially resisted and wanted to speak out against Horus, the weapon he had taken from the Laer temple actually contained a daemon of Slaanesh. This daemon had been whispering to Fulgrim since he picked it up and weakened his resolve to the point where Horus was able to sway him. 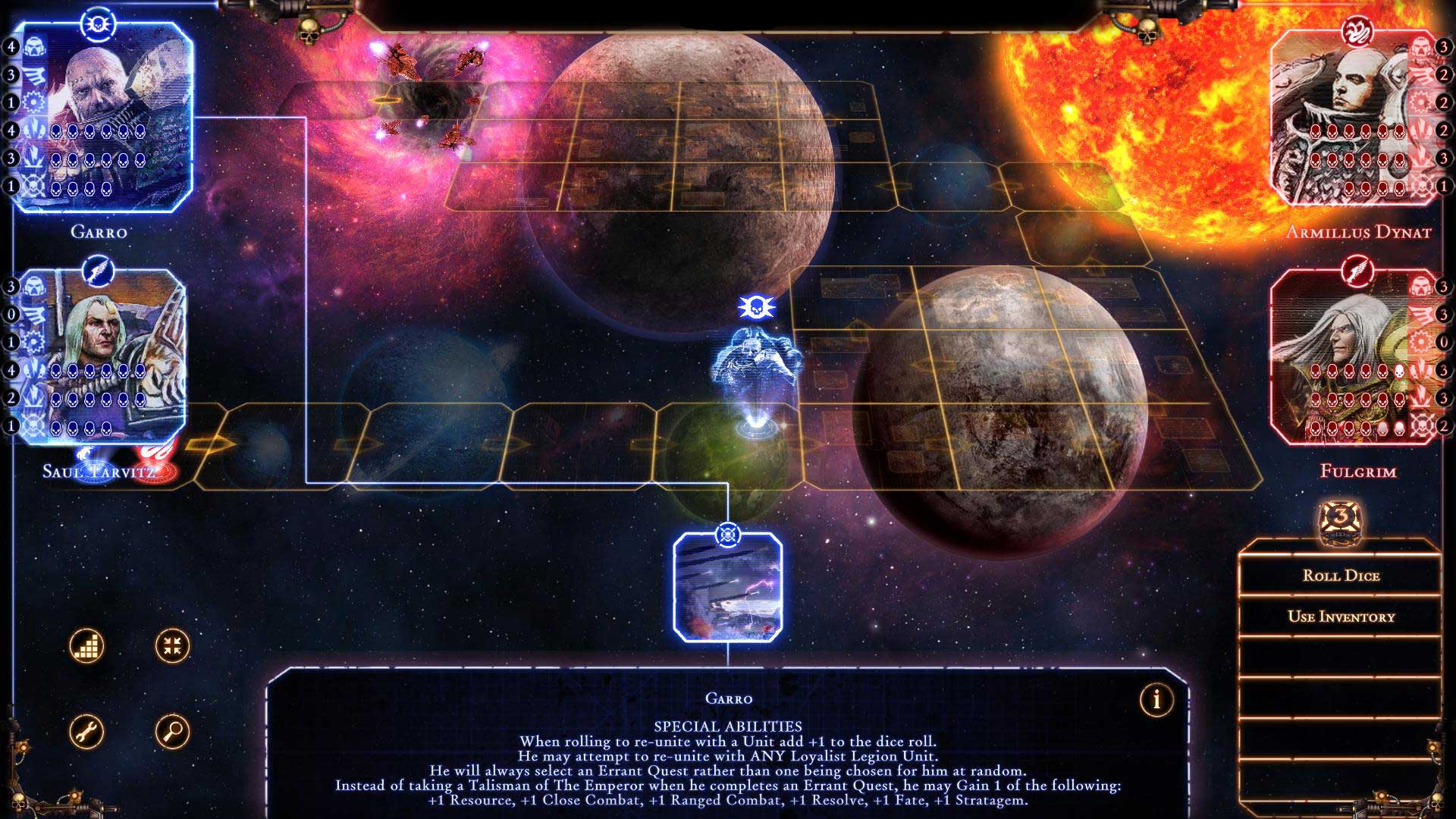 All trace of decency amongst the Emperor’s Children had vanished by the time they partook in the Siege of Terra. While other Traitor Legions assaulted the Imperial Palace, the Emperor’s Children embarked upon a spree of terror and gratification amongst the helpless citizenry of Terra. Millions of defenseless civilians were slaughtered and rendered down to create endless varieties of drugs and stimulants, countless thousands more dying to provide the Legionnaires with more direct and cruder pleasure.

When Horus was defeated, the Emperor’s Children left a trail of depopulated worlds in their wake as they fled to the Eye of Terror. They were the first of Legions to begin raiding Imperial worlds for captives and plunder. Their excesses knew no limits and raiding alone could not fuel their ever more boundless depravities. In their unrestrained fervour, they soon took to capturing the slaves and servants of the other Traitor Legions, triggering a series of wars within the Eye of Terror.

Since that time, they have plotted and schemed and rampaged across the galaxy, leaving naught but sonically devastated battlefields in their wake.

So beware when reading or listening to music, you never know when you might fall sway to the slavering voice of Slaanesh.