With a new Sicaran on the way, we figured it was time to take a look at the Sicaran Battle Tank and see how it stacks-up vs it’s closest cousin – the Predator!

Forge World just put out a brand new Sicaran Omega Tank Destroyer out today which is a pretty sweet tank kit by itself. It’s kind of funny that the rules for it’s weapon say that it generates an additional Mortal Wound on a wound roll of a “6” and not on a +6…but that’s probably just a typo. Regardless, we were taking a look at the O.G. Sicaran and started to think, “Hey, is it worth taking or is a Predator about as good for the cost?” So let’s put them both under the microscope and take a look!

Note: We’re just comparing the base model – so the “default” options and basic Power Levels. No upgrades or fancy options – that includes the side sponsons (but seeing as they have the same sponson options, we felt that was a wash anyways). 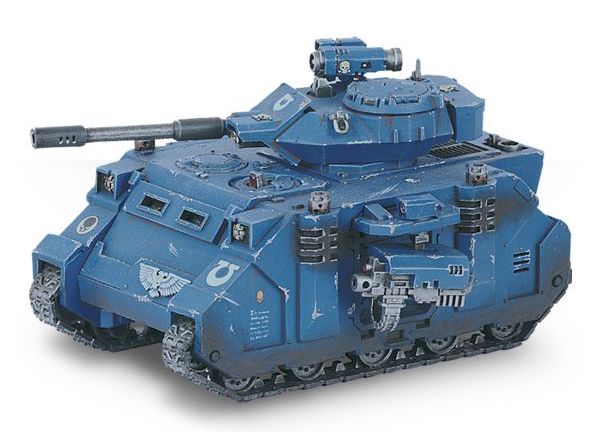 The Predator is a battle tank employed by the Space Marines. It is a more heavily armed and armoured version of the Rhino personnel carrier. 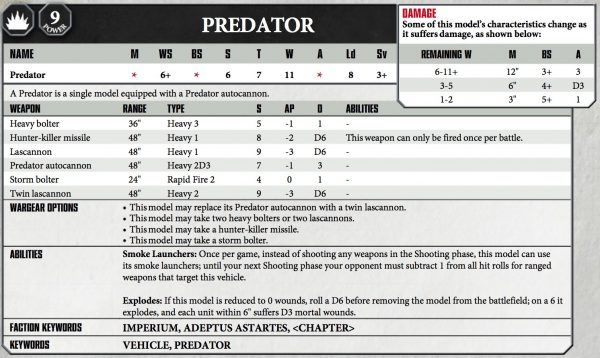 Power Level: 9 ; Coming in at only 9 Power Level, that leaves another 5 PL to play with over a Sicaran. What could you get for 5 Power Level? How about a Whirlwind, a Hunter, a Scout Bike Squad (it’s only 4), a Bike Squad, Assault Squad, any of the Transport Options (Rhino, Razorback, Drop pod, Land Speeder Storm), a Reiver Squad, a Tactical Squad…and a ton more options. I’d say that makes it a winner in this category.

Movement: 12″ degrading down to 3″ ; Pretty standard for most Rhino Chassis vehicles. Unfortunately that means it loses out vs the Sicaran.

WS: 6+ ; Tie – if you’re tanks are in close combat something has gone horribly wrong.

T: 7 ; Tie. The Sicaran looks like a tougher tank, but statwise, they come out the same except…

A: 3 degrading down to 1 ; Less attacks than the Sicaran…but see WS.

Predator Autocannon ; 48″ Range and 2D3 shots at S 7, AP -1 and 3 Damage. That’s not too shabby! It can threaten pretty much anything on the table with one of those stats. Vehicles aren’t going to like the AP or the Damage, Infantry aren’t going to like the Strength or the 2-6 shots. Again, not a bad weapon overall. Unfortunately, the Sicaran has an extra gun AND a statistically meaner weapon…sorry Predator, the Sicaran wins on that front. 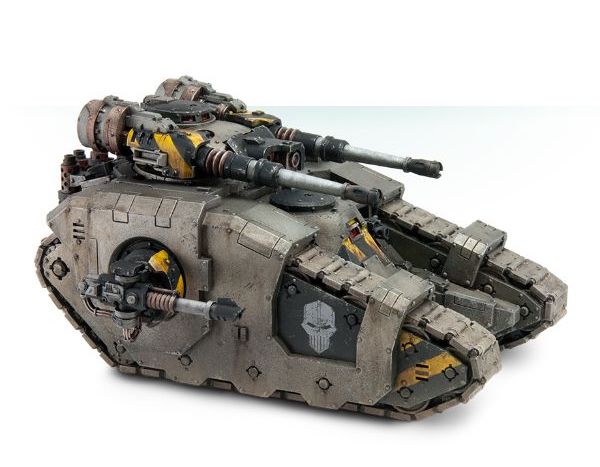 The Sicaran Battle Tank was a type of heavy tank used by the Legiones Astartes during the Horus Heresy and Great Crusade. 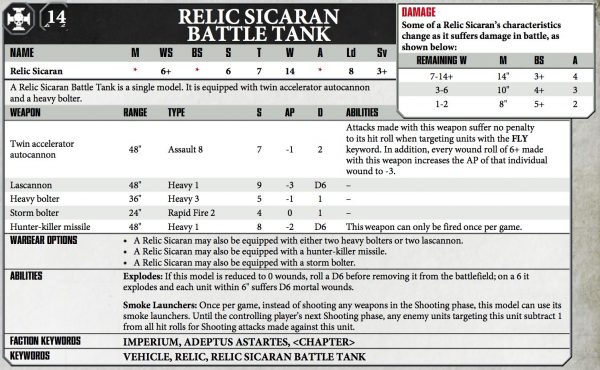 Power Level: 14 ; The Sicaran cost more points right off the bat. You’re going to miss out on taking SOMETHING else in the list comparatively. Is it worth the points? That’s what we’re trying to find out!

Movement: 14″ degrading down to 8″ ; The Sicaran wins out in terms of speed, pure and simple.

T: 7 ; Tie. Same toughness, different chassis. I wonder what the difference is…

Twin Accelerator Autocannon ; It’s got the same range of 48″ but it’s Assault 8(!) at S 7 AP -1 and “only” 2 Damage. However, it can shoot at units with keyword FLY with no penalty – take that Super Sonic! Plus on Wound rolls of 6+ the AP jumps up to -3! That’s pretty solid.

Model-wise, the Sicaran also takes up more table space, but not by much. It’s also the “cooler” looking model. But numbers-wise the Predator can generate ALMOST as much damage as the Sicaran, surprisingly enough (at max damage it’s 18 damage from the Predator vs 19 damage from the Sicaran). Plus for 5 Power Level cheaper, you literally could toss in another tank. However, while those were both big factors in the Predator’s favor, the Sicaran can clear pump out more shots per turn which could kill more models per turn and it’s got more staying power.

We kept going back to the Power Level Points and just couldn’t decide if that 5 Power Level cost was justified. It’s really a tough call. But at the end of the day, we had to go with the Sicaran. It’s just got more of a “Cool-factor” and even though the Predator has gotten a BIG improvement in 8th, all those same benefits also applied to the Sicaran.

It really was a close one – which side of the fence did you fall on? The Sicaran or the Predator?