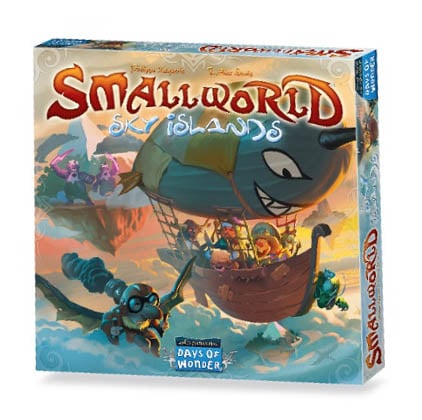 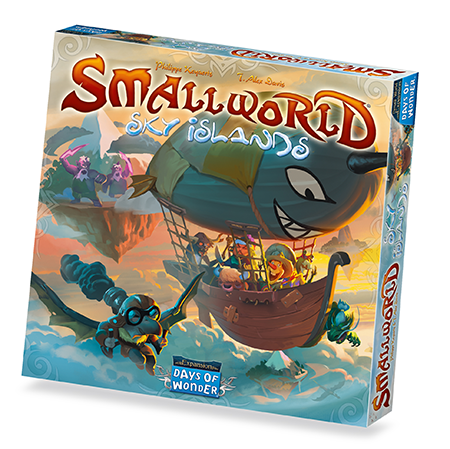 Take to the skies with this upcoming expansion to Days of Wonder’s fantasy themed territory control game, Small World.

Small World is an award winning territory control game which stands out from the rest with its race mechanic. Throughout the game, each player cycles through several different races, each with a randomly paired attribute which adds to their abilities. The Sky Islands expansion adds a double-sided board that is used in conjunction with the original game board to add either two or three sky islands. The sky islands are access through a Giant Magical Beanstalk or a Stairway To Heaven on the original board. If a single player controls each region on one of the sky islands, they gain an additional coin at the end of their turn. The expansion also comes with 7 new races and 7 new special powers that can be fully utilized in your core game.

In the genre of territory control games, which are so often super serious, Small World stands out as a fun and silly counterpoint while remaining tactical and strategic. It’s one of my favorite territory control games and certainly one of my all time favorites. Each expansion which has come out (all 16 of them) has added fun new mechanics and game elements. However, because of the nature of how players draw their race, the game never feels bogged down. Instead, each expansion adds replayability with adding new combinations of races and powers to discover. Sky Islands was designed by the original Small World designer Philippe Keyaerts and T. Alex Davis.

via Days of Wonder 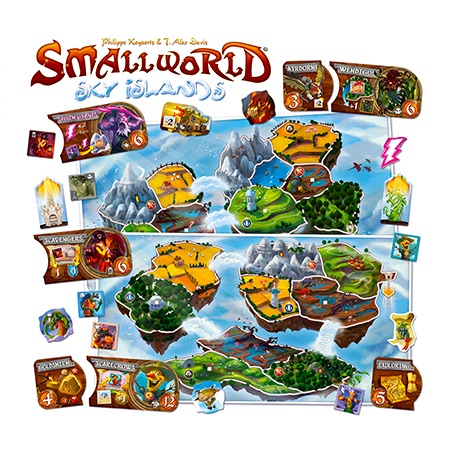 It was a lovely spring morning; giants were getting new tattoos and the rest of the Small World inhabitants were preparing for another day of conquests. An eerie silence settled on the land as a huge shadow glided over forest and mountain. Had the Wizards accidentally given their flocks of sheep flight again?

All eyes turned to the horizon as an archipelago of Sky Islands floated over Small World…and realization dawned at the same time as the sun. New land means new riches! Within a few hours, the most enterprising races were swarming up a Giant Magical Beanstalk and a Stairway to Heaven on their way to wealth. The battle for the Sky Islands had just begun…

If you find a golden, singing harp on one of the sky islands, leave it alone.