The Astra Militarum have a total of 15  orders now thanks to their core 7 and the Regimental Order – let’s take a brief look at each one!

The Voice of Command

It all starts with the Voice of Command rule. This hasn’t changed from the Index to the Codex. But just remember, both the issuing unit and the receiving unit have to be from the same REGIMENT for the order to take effect. 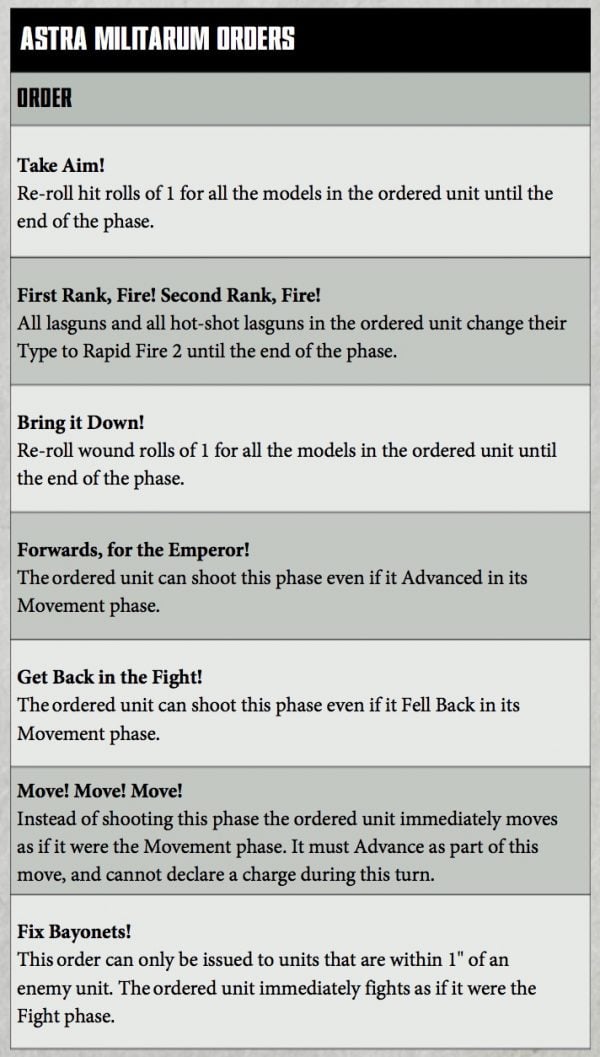 These are the basic orders for the Astra Militarum – they haven’t changed from Index to Codex with the exception of additional flavor text in the codex. Remember – these orders all take place at the start of the SHOOTING phase. To me, that means before units start actually shooting and resolving the standard shooting parts of the phase. Ideally, players should be issuing all these Orders first and then they work their way around the table shooting. With the exception of Fix Bayonets! and Move! Move! Move! that means the player shouldn’t start rolling attacks until all Orders are issued. So yes – Astra Militarum players have to plan out there shooting attacks before they start to roll the results of those attacks.

On key note about the Regimental Orders – there are Orders that can are listed as Tank Orders. These specific Orders can only be given by Tank Commander of the appropriate regiment. Also, these Orders can not be mixed across regiments – Only Catachans can use Chatachan Orders. and so on.  (We’re also slightly paraphrasing these rules – this is an overview, not a word-for-word translation.)

Cadian (Tank Order) – Pound Them to Dust! – For the duration of the phase you can re-roll the dice when determining the number of attacks the ordered model can make with turret weapons that use a random number (e.g. Heavy D6).

Catachan – Burn Them Out! You can re-roll the dice when determining the random number of attacks for Flamers and Heavy Flamers until the end of the phase. Additionally, targeted units do not gain the benefits for being in cover from these attacks.

Valhallan – Fire on My Command! –

Vostroyan – Repel the Enemy! – Until the end of the phase, the ordered unit can fire it’s weapons while within 1″ of the enemy. They must target enemy units within 1″.

Tallarn (Tank Order) – Get Around Behind Them! – The ordered model can move up to 6″ in this phase, either before or after it shoots, as it if were the Movement phase, This does not affect how far the vehicle has moved for the purposes of determining how many times it can fire it’s turret weapon.

Some of these Orders seem a little redundant (Repel the Enemy! and Get Back in the Fight!). Some these Orders open up a whole world of possibilities for play styles (Get Around Behind Them! is amazing). When you factor in Warlord Traits, Stratagems, and Regimental Doctrines the Astra Militarum become a well oiled Imperial Pain Machine. 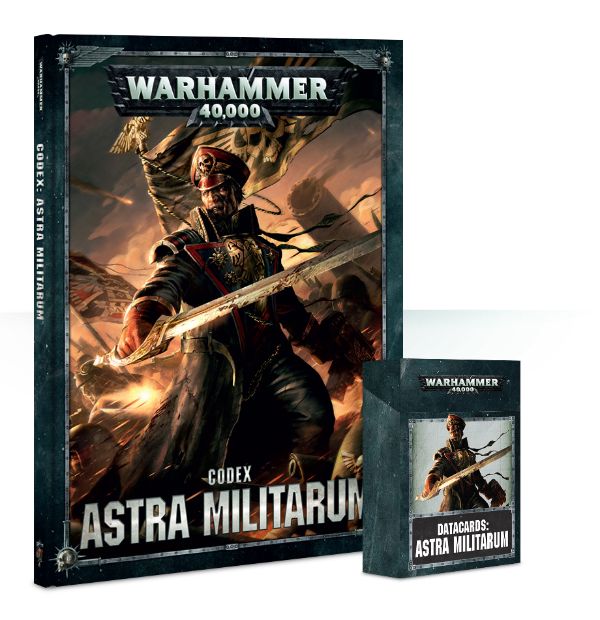 So what do you think of the Orders for the Astra Militarum?