It’s time to take a look at the Warlord Traits of the Astra Militarum’s leaders – Time Fall in Guardsmen!

The Astra Militarum are getting a total of 15 Unique Warlord traits you can choose from, 6 “generic” and 8 Regimental. We’re going to talk briefly about each one. We’ve got a lot of ground to cover so let’s get marching! 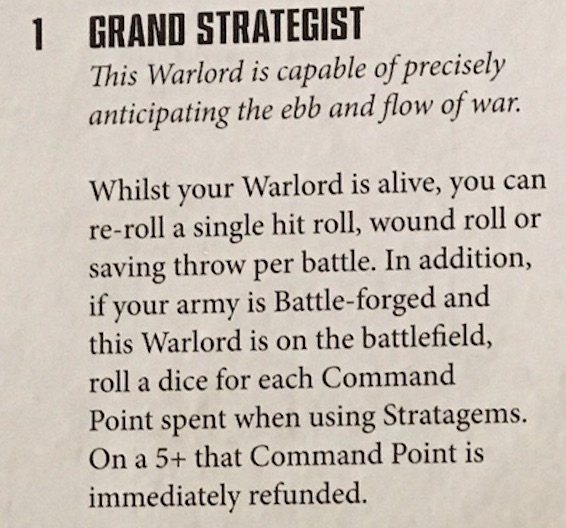 The free re-roll is a nice ability – it could be pretty huge if used at the right time. However, I think the real benefit is the recuperating Command Points on a 5+. We’ve been playing around with the Codex on our Twitch Stream and also off the stream – and when the AM spend Command Points on Stratagems it’s going to be a bad time for their opponent. Getting those points back is just brutal! 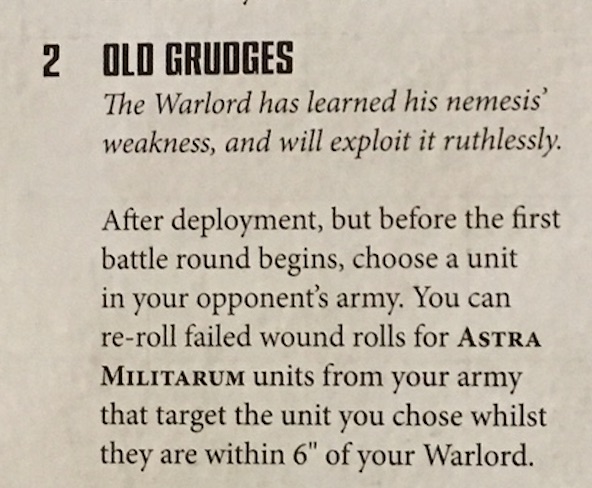 Do you really want to kill a particular unit? Like…REALLY want it dead? Old Grudges fits that concept perfectly. Pick an enemy unit and units within 6″ of you Warlord can re-roll failed wound rolls. Nice. 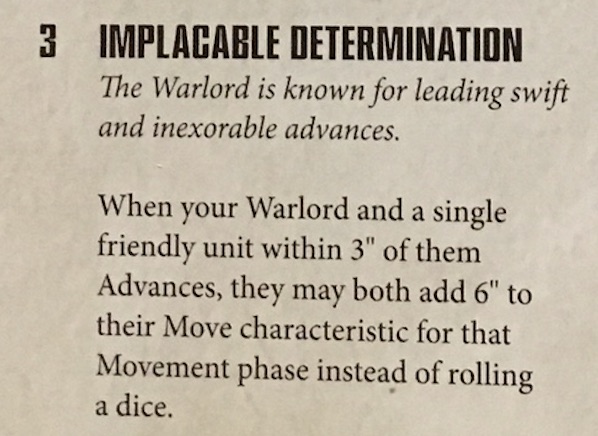 Sometimes you just need to get somewhere and fast. This ability allows your Warlord and a friendly unit to cheer each other on down the finish line by giving them a flat 6″ move when they advance, vs having to roll a D6. 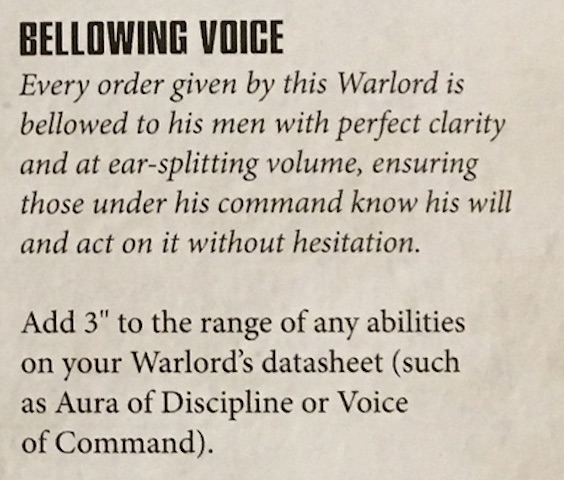 Bellowing Voice is probably one of the most generically useful traits. An extra 3″ to the range of your Warlord’s abilities is going to be helpful in just about all cases. 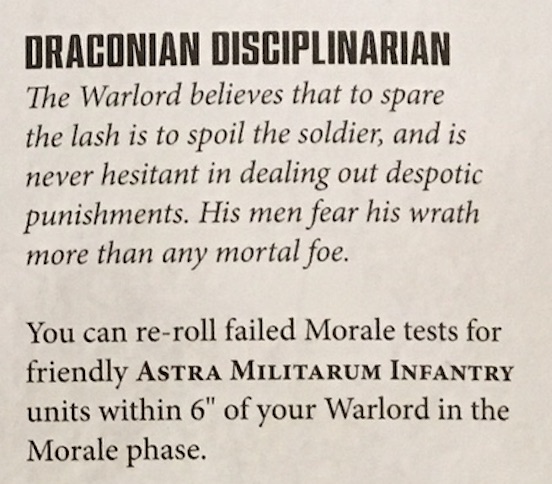 Draconian Disciplinarian seems a bit redundant. If you’ve been playing 40k for long enough you know that having a Commissar nearby basically makes this trait not worth taking. “But you can’t have a Commissar everywhere!” True – but you can’t have more than one Warlord and Commissars are a lot easier to add…Besides, there are better options than re-rolling a failed Morale test. 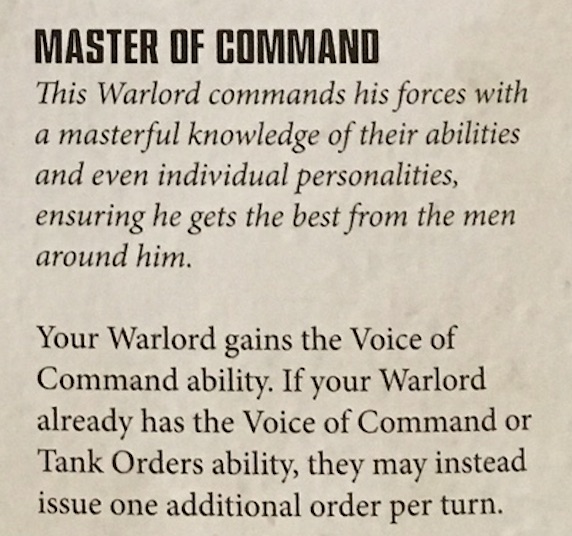 An extra order per turn? Heck yes! Master of Command is also pretty generically useful. I’d expect to see this on the tabletop a lot!

(Note: These are paraphrased from their actual text)

When your Warlord issues an order, on a 4+ that order can affect an additional unit within 6″ of the Warlord of the same type (Infantry or Leman Russ).

This one lets you double-up on orders which is pretty powerful. Combo that with Master of Command and that’s basically 4 Orders a turn. And if it’s Company Commander…well, that’s even more orders a turn for a possible total of 6!

Catachan – Lead From the Front

Warlords can perform a Heroic Intervention if they are within 6″ on any enemy units (after the enemy has completed their charge moves). In addition, if your Warlord Ccarged, was charged, or performed a Heroic Intervention, then until the end of the turn they can re-roll failed to hit rolls.

Basically, your Warlord is getting to re-roll failed hit rolls on the first rounds of a combat. He can also Heroic Intervention 6″ vs 3″ – which could be very useful with the right relics/orders.

This works on both Wounds and Mortal Wounds. Could be useful!

Re-roll failed hit and wound rolls in the Fight Phase for your Warlord.

I hope your Warlord brought something with a higher AP and damage stat than just a chainsword!

Your Warlord and all friendly Tallarn units within 6″ can charge even if they Fell Back this turn.

So, fall back, shoot them with an order and then charge right back into combat all on the same turn. Mean…

Your Warlord can attempt to deny one psychic power like a psker each enemy Psychic Phase.

Roll a die for each model that flees from Mordian units within 6″ of your Warlord during the Morale Phase. On a 4+, that model does not flee.

Guess what stacks with the Commissar’s ability? Yeah…Get ready to see some Mordian Lord Commissars on the table. 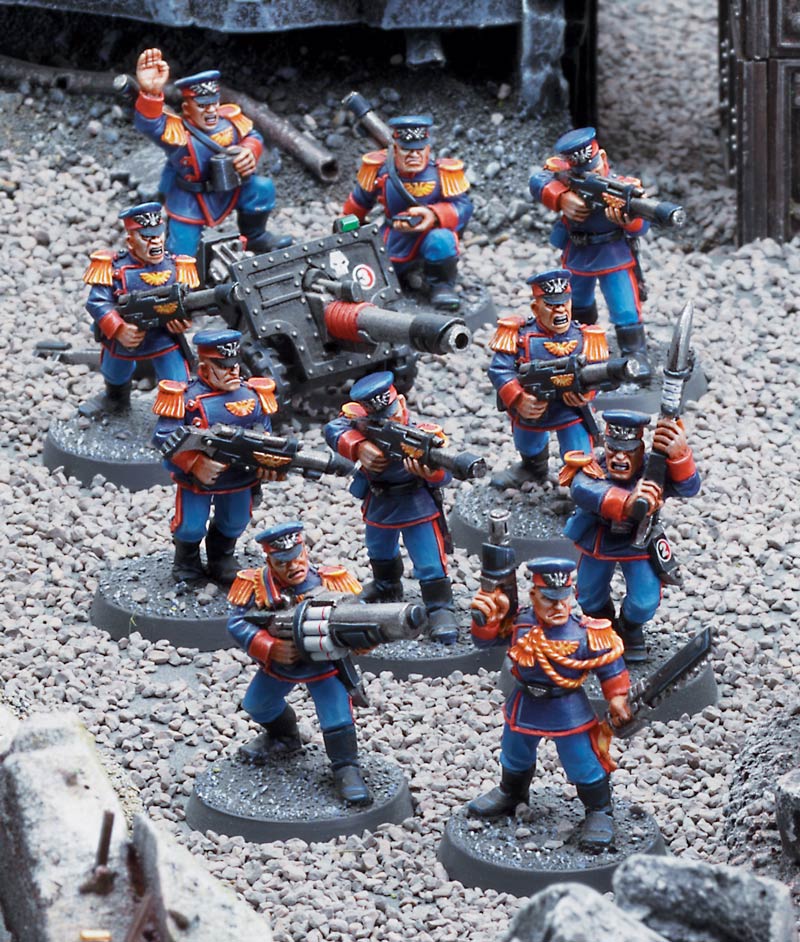 The Astra Militarum are going to be a force to be feared on the tabletop. When you start to look at the Orders and other benefits of the Regiments – the way the different armies will play out start to look pretty obvious. They way each ability builds on top of each other is really impressive…and terrifying.

Do you have a favorite Warlord Trait? Which Regiment is calling your name? Let us know in the comments below!