(Editor’s note: while our offices are occupied by Militarum forces, we have a special guest loremaster that we are voluntarily granting access to our publication without any coercion–since the Militarum are not known for their literacy, we have here a transcription of their presentation that we have faithfully transcribed)

Ten-HUT! This will be a lecture about the effectiveness and history of the Leman Russ Battle Tank and ONLY the Leman Russ Battle Tank. That’s the problem with learning in general–learning leads to questions, and questions are the weapons of the enemy. What happens if you question orders? Corporal? I see you standing there with a blank look on your face. Excellent. That shows an awareness of the dangers of questions–and make no mistake, they are dangerous. Questioning orders will get you shot, Questioning the Emperor will get you shot for heresy, questioning a superior officer will get you beat. And then shot. Thinking never got anyone anywhere in life. 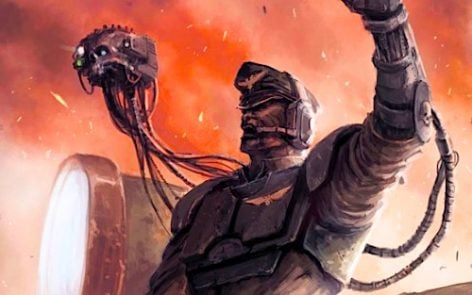 And anyway, thanks to the Ad-Mech, you’ll have plenty of time to think once you’re dead.

That sounds like a question, soldier. We’ve been Guard ever since I was enlisted. Now here are the key characteristics of the Leman Russ Battle Tank. It is the main Battle Tank of the Imperial Guard. This rugged and dependable tank has been used for centuries and while fundamental changes in construction and appearance have occurred its capabilities have changed very little, able to operate in a variety of environments and withstand enemy fire while delivering powerful tank-killing blows. It was named after Leman Russ, the Primarch of the Space Wolves.

During the Great Crusade the STC of the Leman Russ Battle Tank was discovered on Nova Borilia. The world had been part of the Noman civilization, which had enslaved a portion of humanity for millennia. The Noman were crushed by the Space Wolves, who recovered the STC and named its fruit in the honor of their Primarch. 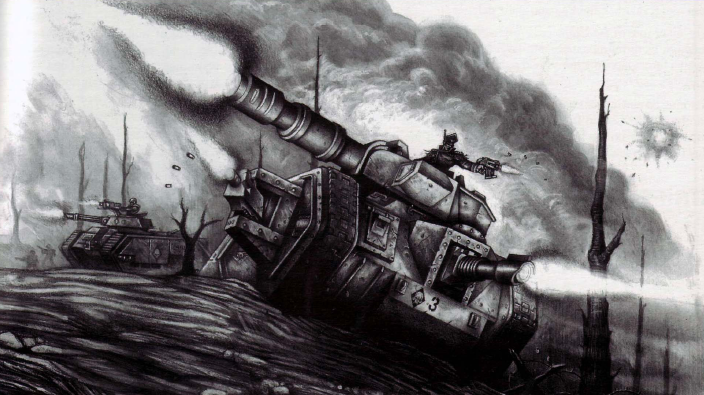 The only thing this machine thinks about is rate of fire.

Nonsense–the Leman Russ might be constructed with plans found from one of the Imperium’s sacred STCs, but it’s made and maintained with good old-fashioned Imperial know-how and elbow grease. Do you really think the Munitorum would let anything tell them what to do? Especially with the Leman Russ, which in the Crusade era served as the main battle tank of the Imperial Army (and later the  Astra Militarum) and the mainstay of armoured regiments across the Imperium, the Leman Russ is produced in the millions on Forge Worlds and in Hive factories across the Imperium. While slow in comparison to other Guard vehicles and lacking in advanced technology, its ruggedness and reliability are the tank’s defining attribute. Emphasizing heavy firepower and armour over mobility, it is rare for any Imperial Guard force to engage an enemy army without the support of Leman Russ tanks. The Leman Russ has been in service for millennia, a testament to its simple but efficient and easily producible design, making it arguably the most successful tank in the galaxy. 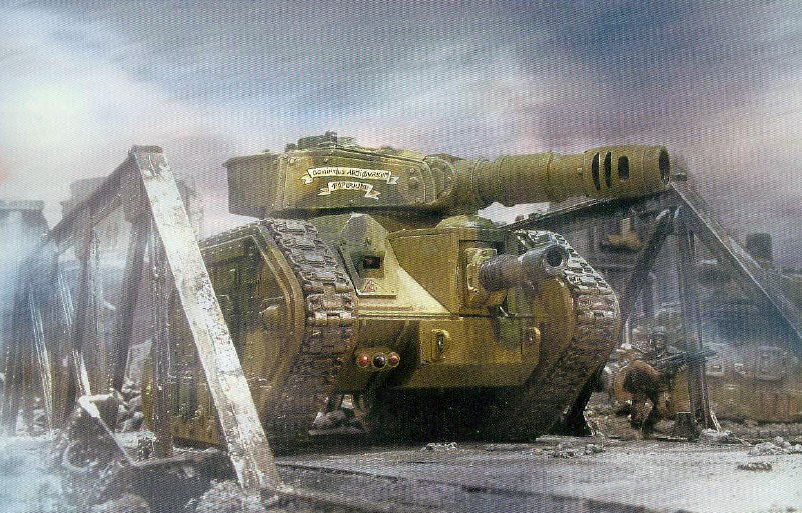 Without question the Leman Russ is the most successful tank in the Galaxy. With its grinding advance, and ability to put out enough firepower to make even one of those damn spiky elves think “that’s excessive” the Leman Russ is capable of withering any foe that stands in its way. The main gun of the Leman Russ is its turret-mounted Battle Cannon, a 120mm smoothbore gun which can equally decimate enemy infantry and tanks. A water-cooled jacket surrounds the cannon while gyrostabilisers ensure accurate targeting while on the move. Aiming the weapon is done through a dedicated periscope with a 45° field of vision with assistance from Targeter gear such as laser-rangefinders. Auspex guidance such as landscape readers and crosswind indicators provide additional information to assist in locating and targeting the enemy. Secondary armament will generally consist of a Lascannon in the forward hull mount with a 90° field of fire though other options include a Heavy Bolter or Heavy Flamer. The side sponson mounts are an optional part of the tank’s design, but when mounted they can be fitted with a variety of heavy weapons for close-in defense including Heavy Bolters, Heavy Flamers, Multi-meltas or Plasma Cannons. These are manned by dedicated gunners and capable of a 90° field of fire to the front and sides of the vehicle.

And like the Emperor’s Justice, Emperor’s Mercy, Emperor’s Motivation, and Emperor’s Wrath, the Leman Russ comes in many variants, each one of them just as deadly as the last. Whether armed with a punisher autocannon, a vanquisher cannon, or my personal favorite, a demolisher cannon, the Leman Russ has seen the Imperium through the last ten milennia of conflict. How has it done this? Efficiency and grit. Every Guardsman’s best tools.

I thought you were saying the Leman Russ was our best tool. And last week you said it was our lasgun, Sarge.

I say lots of things, Soldier. And they’re all true. Now, the Leman Russ’ armour is not the most sophisticated but is practical and rugged, allowing it to weather the harshest environments or enemy fire. Due to the tanks simple and functional design it requires minimal training for new crews to become familiar with the tank’s operations. A reinforced cast plasteel hull and turret with ferro-steel armour plating combine to make it proof against all but the most deadly attacks. Even impacts powerful enough to lurch the tank several meters sideways will fail to penetrate through its tough hide, though such attacks can damage secondary systems such as the forward scopes and leave the crew stunned. This armour is thickest on the tank’s front, with decreasing thickness along the sides and rear, to prevent the engine from overheating or over-straining of the transmission. 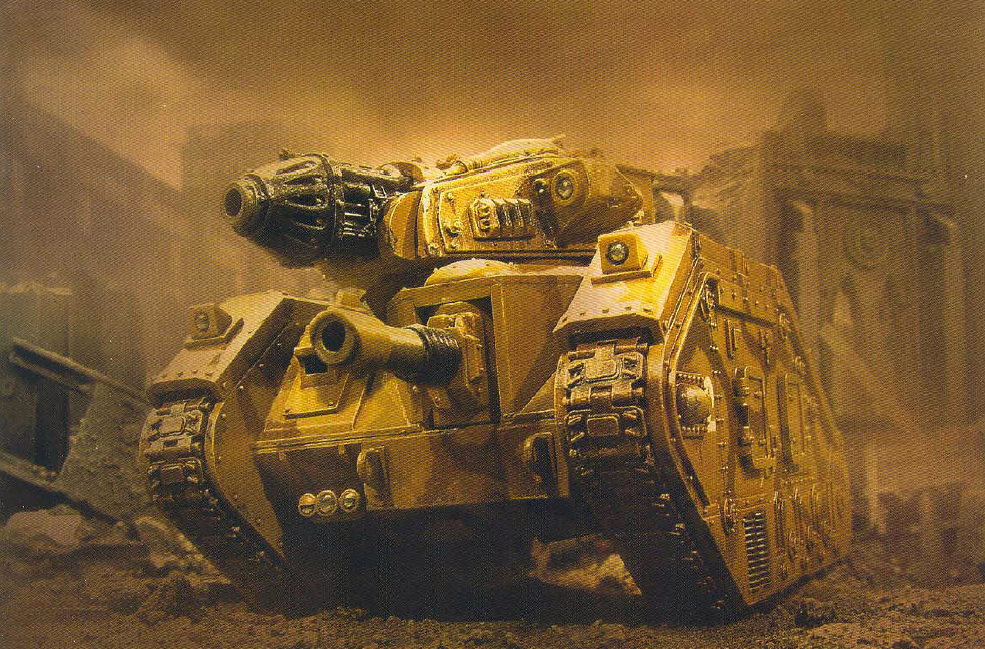 The sturdy, efficient engine which powers the Leman Russ can run on practically any type of fuel and keep the vehicle moving even in the most hellish conditions; secondary systems such as life support and electrics are powered by internal generators. While a slow vehicle the tank’s track arrangement means it exerts a low amount of ground pressure which, combined with fine regenerative steering, allows it to perform almost balletic maneuvers. Hard-wound steel spring shock-absorbers provide added stability on the move.

Other standard gear include Smoke Launchers and a Searchlight. Some Leman Russ tanks are further upgraded with Camo Netting, a Dozer Blade, Extra Armour, a Hunter-Killer Missile and/or a pintle-mounted Heavy Stubber/Storm Bolter.

A minimum of four crew are required to operate the Leman Russ, with two more needed to man the sponson weapons if mounted, though they must do so without comfort in a cramped, hot and noisy environment. The sponson gunners are the most junior members of the crew, responsible for manning the cramped sponson weapons and otherwise aiding the other members in any tasks. Above them is the loader, responsible for loading the main gun and, as needed, manning the hull-mounted weapon. Outside of combat his job will be to keep track of the tank’s logistical needs and ensure it has been re-armed and refueled prior to battle. The driver is next in seniority, a highly technical job responsible for not only driving the tank but also overseeing basic maintenance of the tank’s running gear. When stationary the driver can man the hull-mounted weapon, though this practice is discouraged by most since it leaves the tank immobile. The gunner is tasked with firing the tank’s primary weapon, along with any co-axial weapons, and also functions as the tank’s second-in-command. Between battles his responsibility is to clean and maintain the tank’s weapons. The tank commander directs the other crewmembers and is responsible for maintaining an overall picture of the battle, keeping in contact with other tanks through external communication equipment, and manning any pintle-mounted weapons. The current estimate of Leman Russes in active service is not enough.

Rugged stability. Driving efficiency. And enough firepower to bring down any enemy you can think of. Even the dark gods of Chaos are no match for the massed firepower of a company of Russes. Any questions?

(editor’s note: the session erupted into anarchy, we’ve done our best to transcribe the audio)

Sarge, I saw a shell bounce right off of a daemon once.

Sarge, I heard that Land Raiders are better.

Sarge, is it true that there is a place where, if you shoot a Leman Russ, it will explode?

Sarge, is it true that a Leman Russ could have a machine spirit, and we wouldn’t have to clean them out?

Sarge, is it true about heresy?

Editor’s note: at this point, the sergeant began shouting, and we’re not sure such expletives are permitted, given our orders from the Inquisitorium, so we have redacted the Sergeant’s tirade. But that was certainly educational, and definitely enriched all our Loremasters, and is a sign of the…tenacity of the Militarum, who have thankfully been apprehended by the Arbites for rioting.