Harpoon Missiles have taken the game by storm. What makes them so very good, and how can you get in on the action? Let’s dive in.Eat your heart out, Captain Ahab. Guns For Hire has arrived, and it brings more than just titles and toys for Scum’s small ships: it’s brought us the hot new weapon on the block, the Harpoon Missile. Already whole squads are being built to maximize these bad boys, and to great effect. Let’s look at what makes them so good. 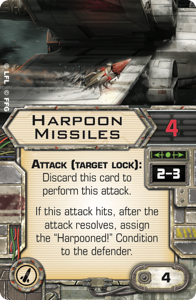 For starters, they’re very accurate. How accurate? Assuming Guidance Chips, let’s compare them to Concussion Missiles, which also weigh in at four points:

Not too shabby, huh? Hold on, Harpoons just said “Hold my beer”:

Concussions have only mild inherent accuracy; even with Chips they count on you being focused to hit their full potential. Not so with Harpoons. They don’t need the help, meaning you don’t have to choose pilots or EPTs for their action efficiency to deliver crushing blows. (Freeing you to take, I don’t know… Veteran Instincts, maybe? We’ll come back to this.) And, naturally, if you *can* get both, you can go to a big-ticket tournament and reasonably go the full day without getting fewer than four hit results. Don’t forget you might not have to spend your lock at all, a wonderful enabler of follow-up shots.

Now, those same characteristics are true of Homing Missiles. That’s why I selected them as my ordnance of choice for my sure-I’ll-take-a-Rebel-HWK-to-a-major-tournament-because-I-love-punishment list. Harpoons, though, are better and cheaper than Homings. Answer me this: do Homing Missiles turn their victims into Seismic Charges? No? I rest my case. 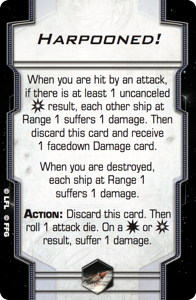 Splash damage kills. It covers the major weakness alpha strike lists have long exhibited. Once your ordnance is away, you’d better hope you crippled the enemy list, because now you’re at a points/platforms handicap yourself. Harpoons change this dynamic: they extend the benefits of the alpha strike by softening up even those ships not directly struck, giving the alpha strikers a more manageable task in closing out the game. Too, unlike other ordnance, this advantage compounds when multiples are used: a second Proton Torpedo against a low-health target might seem like a waste, but a second Harpoon against a low-health target means *two* points of splash damage– a worthy use of a missile, especially at high PS.

The sheer potency of Harpoons have helped bring a new archetype to prominence. As I noted in my article on how PS is being valued more highly, high-PS ordnance lists are rapidly rising in prominence. The reasoning is sound: the best defense, as we all know, is to not get shot. You can accomplish that by arc-dodging, but you can also accomplish that by murder, and once first-shot firepower got to a certain degree of intensity, basing a list on that strategy became viable.

TelGar, winning list at Worlds, was the harbinger, though with the Jumpmaster nerf that list’s glory days are already over. Cruise Missiles were next to the party. Their accuracy matches Homing or Harpoon Missiles, and they have a higher ceiling than either for a mere three points. The trouble was that they locked you into certain flying patterns. Ordnance carriers have to be able to go fast or slow to control the range; Cruise Missiles only do their job if you fly fast.

Now we have Harpoons. Harpoons (once you consider the way the condition works) have a similar ceiling to Cruise Missiles, but for one more point add in splash damage and free you from the tyranny of speed. What’s not to like? 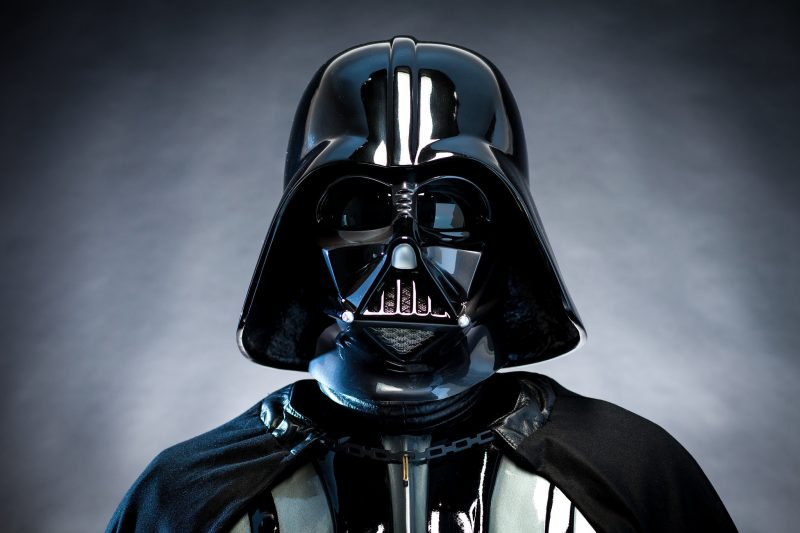 Even though Harpoons are new, we’re already seeing lists of every faction engineered to maximize their potential. These three have a few interesting similarities: they’re small-ship-based three-ship lists, and they treasure PS advantages like Gollum prized the One Ring. Here they are, shamelessly borrowed from some of the better blogs on the web:

IMPERIAL
Quickdraw: Harpoon Missiles, Chips, VI
Vader: /X1, ATC, Harpoon Missiles, Chips, VI
Inquisitor: /V1, VI, Harpoon Missiles, Chips
This list will fire first in virtually any matchup, which is a big plus in an environment like this, and has the easiest job getting target locks. Its minor weakness is a limited ability to detonate Harpoons (Inquisitor can’t guarantee crits like Quickdraw can, but Inqi fires last). Its more dangerous weakness is an overreliance on Vader to close out games: Inquisitor is a glaring weak link without PtL/Autothrusters, while Quickdraw is similarly underequipped (he feels naked without FCS). One variant substitutes Tomax Bren for the Inquisitor to buy back Quickdraw’s FCS, but that’s a notable downgrade.

REBEL
Airen Cracken: VI, Harpoon Missiles, Chips
Wedge Antilles: Adaptability, BB-8, Plasma Torpedoes, Chips
Captain Nym: VI, Harpoon Missiles, Chips, Bomblet Generator, Rey
At “only” PS 10, this list will fire after the Imperials, and Wedge has to make do with a Plasma Torpedo in place of a Harpoon. However, it has more going for it than you might think at first glance: it has more range control since it can slow-roll, Nym is a wonderful closer, Airen makes the squad trickier than it looks, and between Airen and Rey it can make the first strike very nasty indeed.

The lowest-PS of our examples, scraping along at a lowly PS9, this squad is also the most reliant on getting the initial engagement right since the Khiraxz isn’t known for nimbleness and whoever Stims comes out of the break stressed. That said, the initial pass is glorious: all three Harpoon shots are nasty, each shot can set off the preceding ship’s Harpoon, and Jostero gets a bonus primary shot for giggles. And there might be enough jank in the bank to carry you through afterwards.

What if we wanted to try a lower-PS version? TIE Bombers with Long Range Sensors are always an option, though we can fit four Punishers with Harpoons in a single list and just tank the enemy’s first round (stop laughing!). I also have to wonder if the much-maligned U-Wing has a place here. Bodhi Rook enables lower-PS missile shots; flown aggressively, he can either beg to eat enemy missiles or block them to deny the shots, while helping to space, say, some Z-95s far enough from the enemy to get a good salvo.

~Of course, now we’re into next week’s topic: what to do if you want to zig instead of zag, and play against the emergent Harpoons. Until then!