90’s Board Games Were Weird, Chaotic and Unoriginal 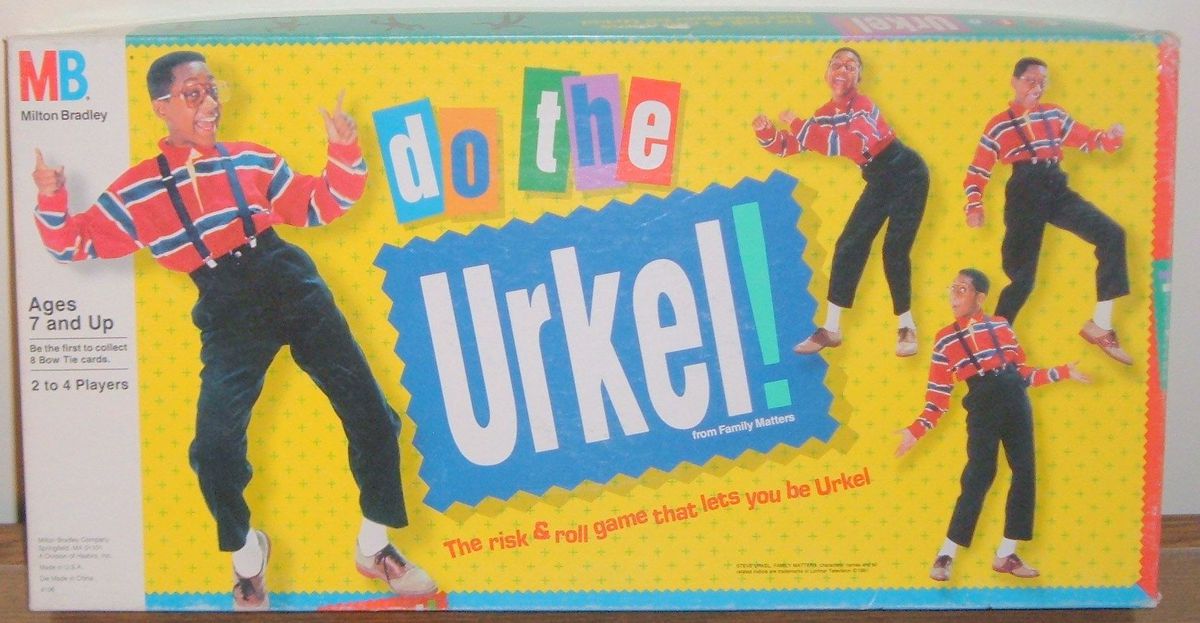 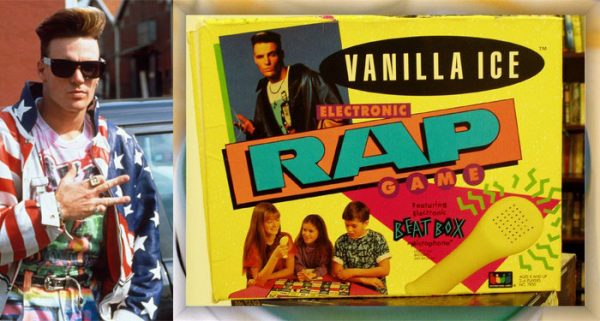 Board games industry has gone through a lot. But there has never been a more confusing and bewildering time than the 90’s.

As anyone roughly my age will tell you, the 90’s were objectively the best decade. Anyone who disagrees is clearly buggin’ and straight trippin’. The 90’s were the bomb and hella tight. Mad props to my dawgs who still know that decade was all that and a bag of chips.  But what’s the 4-1-1 on the board games from back then? Were they as dope as we remember? No DUH!

Well, okay. … Maybe not. Board games from the 90’s were a weird breed. Designers really went off the deep end with some of the games they released. Maybe it was to better compete with the rapidly growing video game market.  Maybe it was to appeal to the kid’s new totally tubular lifestyle. Or maybe it was too much Capri Sun making them wig out.  Whatever the reason, tabletop gaming was a weird combination of innovation and blatant copying from each other. So, let’s take a look at some old games and separate the phat from the wack. 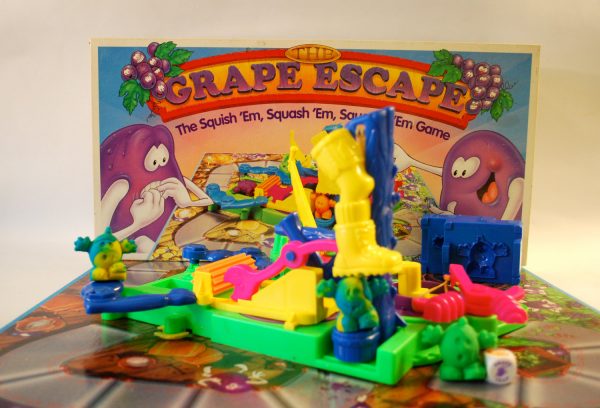 Grape Escape was a dice rolling, point-to-point movement game where players used molded clay figures as their game piece. As they moved around the board, they would land on certain spots that could slice, push, mash or mush their clay figure.  If the die rolled ‘Crank’, the active player rotates a crank which operates the factory destroying any hapless grapes in the wrong place at the wrong time.

Whoever was running the play-doh lobby back in the 90’s was doing a great job. There were a lot of games that used play-doh figures. These games had you mangling your opponent’s piece to really drive the point home that they were losing. Mouse Trap didn’t feature getting to destroy your opponent’s mouse, but that game was functionally the same: Avoid the trap spaces and work some mechanical feature to ruin your opponent. Grape Escape’s game play was fine for a kid, rolling a dice and moving that many spaces is a fine way to introduce kids into gaming.  But the horror of watching my figure get mutilated was too much for me to handle. It instilled a sense of revenge that would follow me to this day. …I’ll get you one day, Brian. 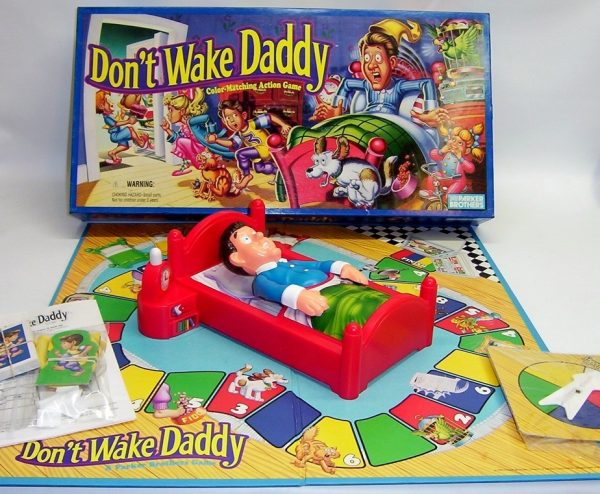 Don’t Wake Daddy is another dice rolling, point-to-point movement game (get ready to see a lot of them). As players move around the board, they will land on certain spaces and, unless they have a certain card, are required to hit the snooze button on daddy’s alarm clock. After a random number of presses, Daddy wakes up and the player is sent back to start. Like Grape Escape, Don’t Wake Daddy is not a good game. But that’s not why you play it. You play it for the fear.

Don’t Wake Daddy was probably the most popular in a shockingly large group of jump scare board games. Don’t Wake Daddy and others all had this feature of waiting for the game to snap and jump and spring just the make you scream. If you can get your hands on any of these games, give them a try with your toughest friends. If nothing else, you’ll have a great time watching them jump. 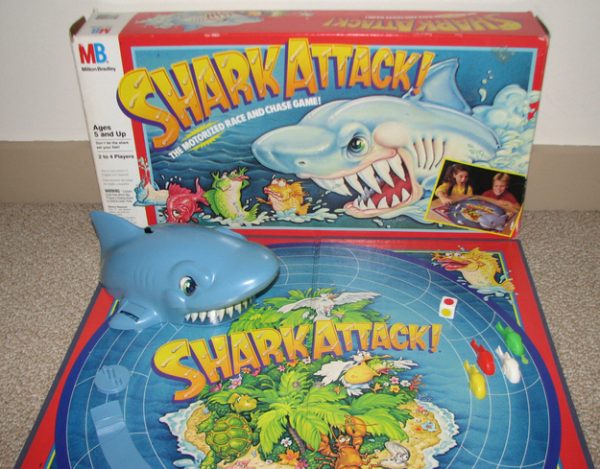 Shark Attack is…yet again, a dice rolling, point-to-point movement game. Players rolled the die and whichever color the die showed got to move forward. The game featured a shark that would lurch forward every few seconds. If the shark ate your fish, you were out. Last one un-eaten wins.

Shark Attack and it’s similar games all featured the same sort of game play. You’d move based on a die roll then the game would do something random and wacky and if the game hit your piece, you were out or send back to start. They were frustrating to play but I’ll admit I loved Forbidden Bridge a lot. The excitement of having your explorer just barely hanging on was thrilling. But it wasn’t worth the disappointment when they ultimately fell next turn. 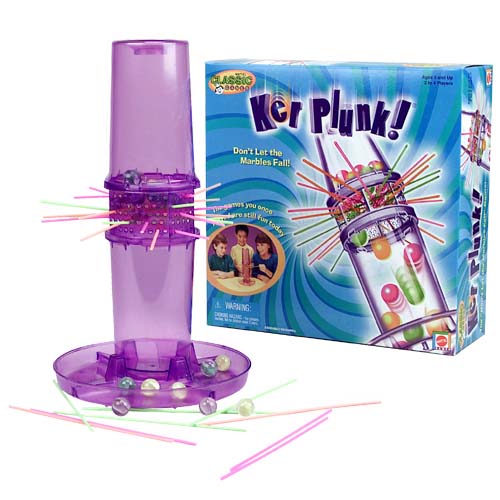 KerPlunk is a dexterity game where players fill the tube with plastic skewers then drop a bunch of marbles in the top. The skewers hold the marbles in place and each turn players remove a skewer, collecting any marbles that fall. The player with the fewest marbles at the end wins.

The 90’s had a lot of physics games. These games relied on the player’s ability to balance something or keep something from breaking. Ultimately, these games rely way too much on the chaotic nature of the universe and I don’t mean dice rolls. There was too much left to physics. A stiff breeze could break the game and any game that could be affected by Mom opening the front door is probably not a very good game. 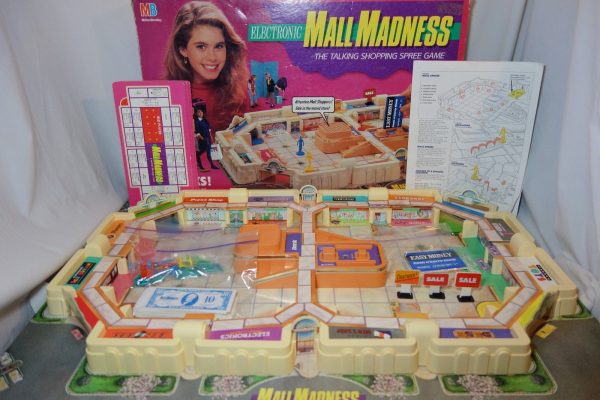 Mall Madness is a sort of dice rolling, sort of set collecting game which featured an electronic game timer and arbiter of sorts. It’s mechanics is hard to pin down. But the main selling points were getting to buy as many clothes and jewelry as you wanted and the electronic device running the game. Whether or not you think games like Mall Madness might perpetuate stereotypical societal norms is not the point! The point here is the game was run by the computer. The computer told you how many spaces to move, it controlled the game timer and it controlled when and where sales appeared. The computer was the entirety of the game’s functionality.

The 90’s were an exciting time for a number of reasons. One of the most influential of them was the fact that electronics were getting dirt cheap. So, this meant that games could have electronic components without really ruining the cost of the game itself. It’s for this reason that Mall Madness and Omega Virus exist. At their core they are games where you move around the board, collecting items and letting the computer run the show. These games were fun because they were basically analog video games. If nothing else the random component, as determined by the computer, allowed for some fair replayability. 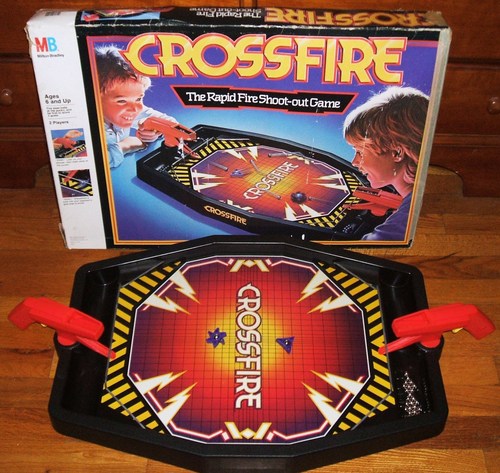 What list of 90’s board games would be complete without Crossfire? The commercial is so iconic at this point that everyone knows the theme song and the burning hellscape which is required to properly play. But no one really remembers how to play. Crossfire requires players to fire their blaster full of ball bearings to knock one of the two objects on the board into their opponent’s goal. It’s basically soccer with guns and two balls. Which should be super rad. But it’s not.

At the end of the day, playing Crossfire is the same as Hungry, Hungry Hippos. You’re mashing your trigger as fast as you can and hoping for the best. True, Crossfire gives a little more to the game with needing to get the object in the goal.  But still, aside from needing to move slightly left or right sometimes, they are the same game. Sorry Crossfire, you’re just not a good game. Button mashing is not a good tactic.

So re-reading this article now, most of these games were wack. A few were pretty phat, but if I’m being real, they were still pretty wack.  The 90’s did have lots of actually good games, but these were not them. But what sort of review article would this be if I rated all the games as bad?  Either way, these old games are usually not terrible and if you can dig up a copy I’m sure you’ll get a good sense of nostalgia.  And if that’s enough to give you enjoyment playing a game, then who am I to say they are wack?

Also, I’m aware I teased pictures of ‘Do The Urkel’ and ‘Vanilla Ice Electronic Rap Game’ without discussing them. I know. You’re welcome.

Did I miss your favorite board game from the 90’s? Let me know in the comments!