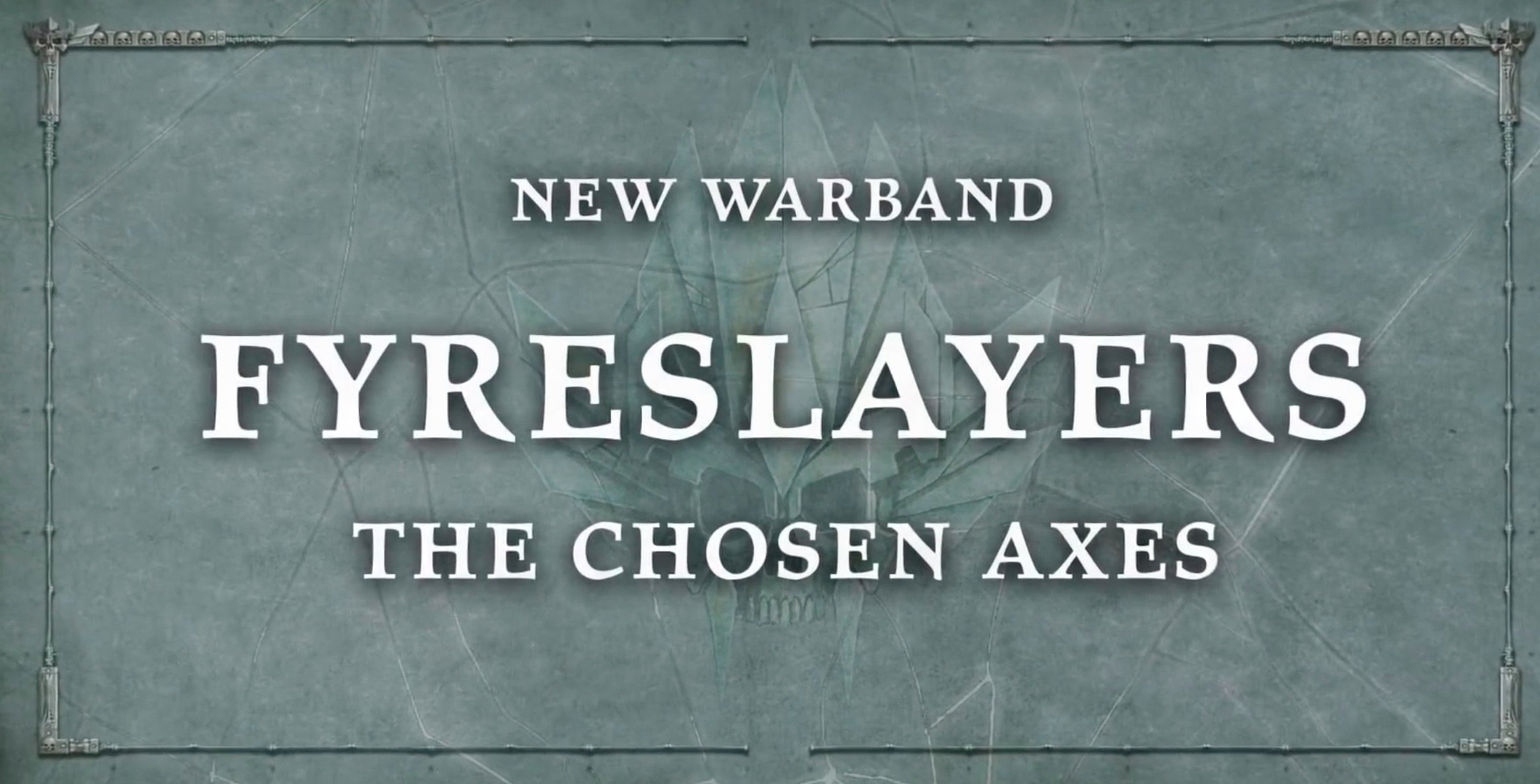 The Fyreslayers are making their way to Shadespire on a quest for Ur-Gold – but have they bit off more than they can chew?

We got our first real looks at the new Fyreslayers Warband from GW earlier and we wanted to take a closer look at them.

The Chosen Axes are Warhammer Underworlds: Shadespire’s latest warband, bringing with them new fighters, new tactics to master and loads of new cards that every warband will be able to make use of. Fyreslayers may be slow, but they’re monstrously powerful in close combat – and Sigmar help you if you let them capture an objective. We’ll be looking at these guys in-depth nearer to their release, and even Warhammer Age of Sigmar players who don’t play Warhammer Underworlds: Shadespire will be able to include them in their army with a pair of new warscrolls.

Now personally, I find something charming about these fiery bearded berzerkers. They are just so over the top that I can’t help but appreciate their brand of crazy. And now that they are invading Shadespire, I’ll have a better reason to pick-up a Fyreslayer warband. 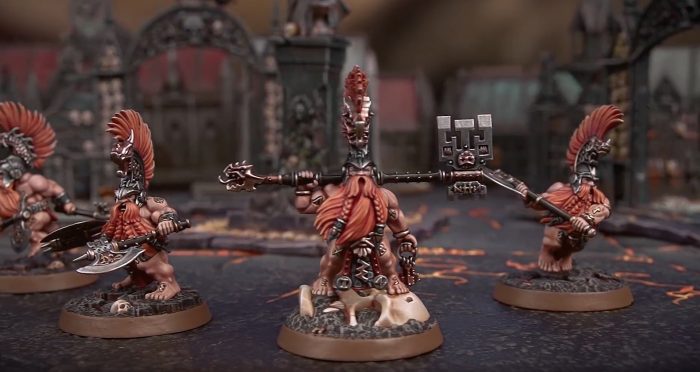 From the video we can see that there are 4 new models for the Chosen Axes. 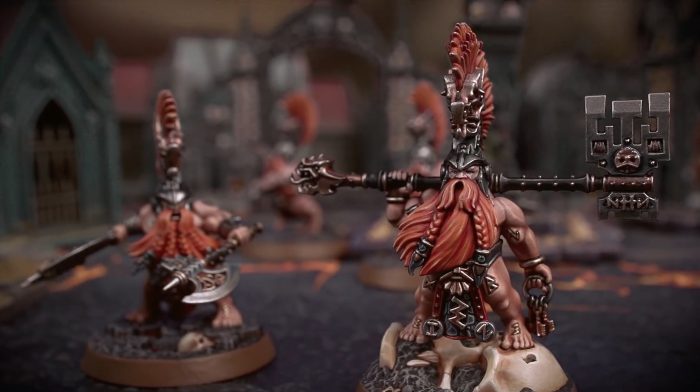 The model in the foreground is most-likely the leader of this band of Fyreslayers. He’s got a mighty looking axe and has a set of keys…maybe to his Ur-Gold loot chest? 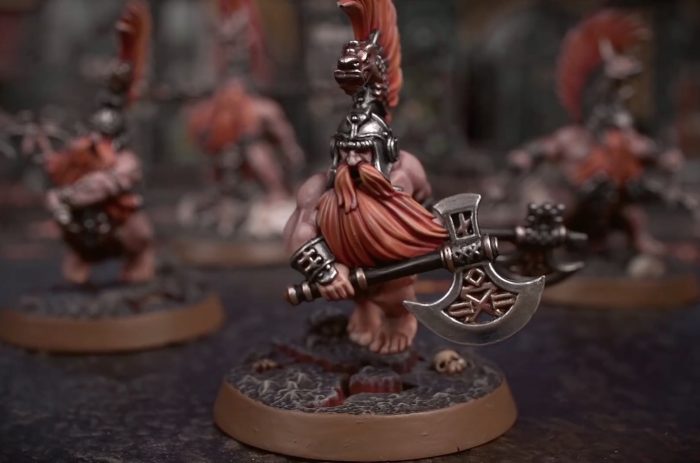 Here we get a look at a member of the warband – he’s a wielding a pair of hand axes and has a sense of movement exaggerated by his pose (and flowing beard). 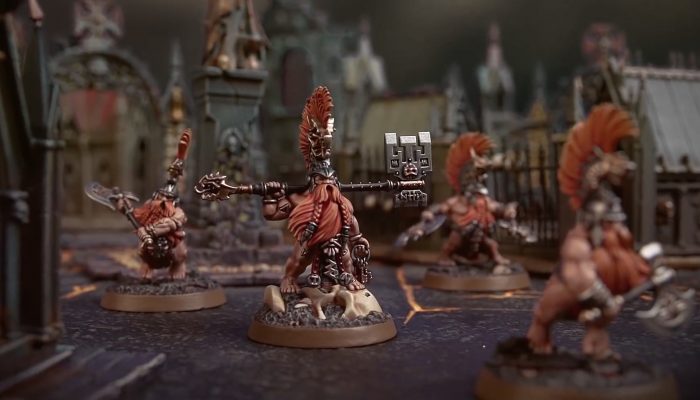 Here we get another group shot – you can see we’ve basically got 2 models with a two-handed axe and two models with a pair of hand/battle axes. 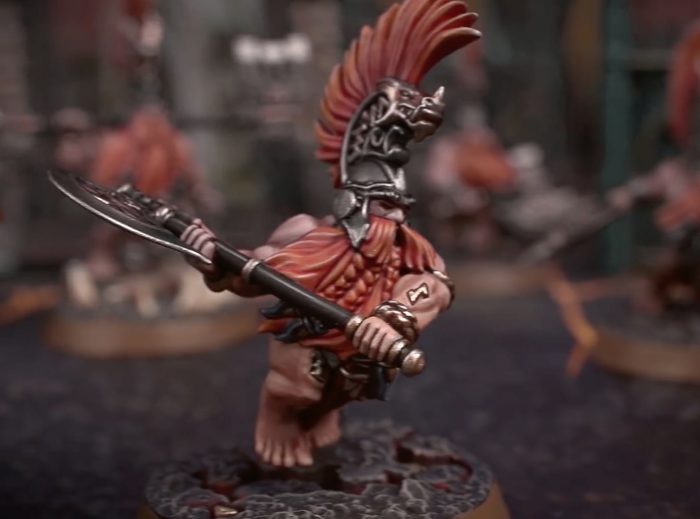 Here’s another look at the OTHER model with a single two-handed axe.

It’s going to be interesting to see where these Fyreslayers fit in the game of Shadespire. We’ve got the Sepulchral Guard on one end of the spectrum of bodies vs toughness and then we’ve got the Stormcasts on the complete other end. The Chosen Axes will have 4 models, so they will have the same number as the Orrucks, but I’m curious as to how they will be different from the Greenskins.

I’m also wondering what Cards and other tricks they will bring to the table. I’m expecting them to be highly aggressive. If they get better the more damage they take, that wouldn’t surprise me at all! They ARE crazy berzekers, after all!

Where do you think the Chosen Axes will fit in playstyle and strategy in Shadespire? Are you ready to rumble with the Berzerk Fyreslayers?