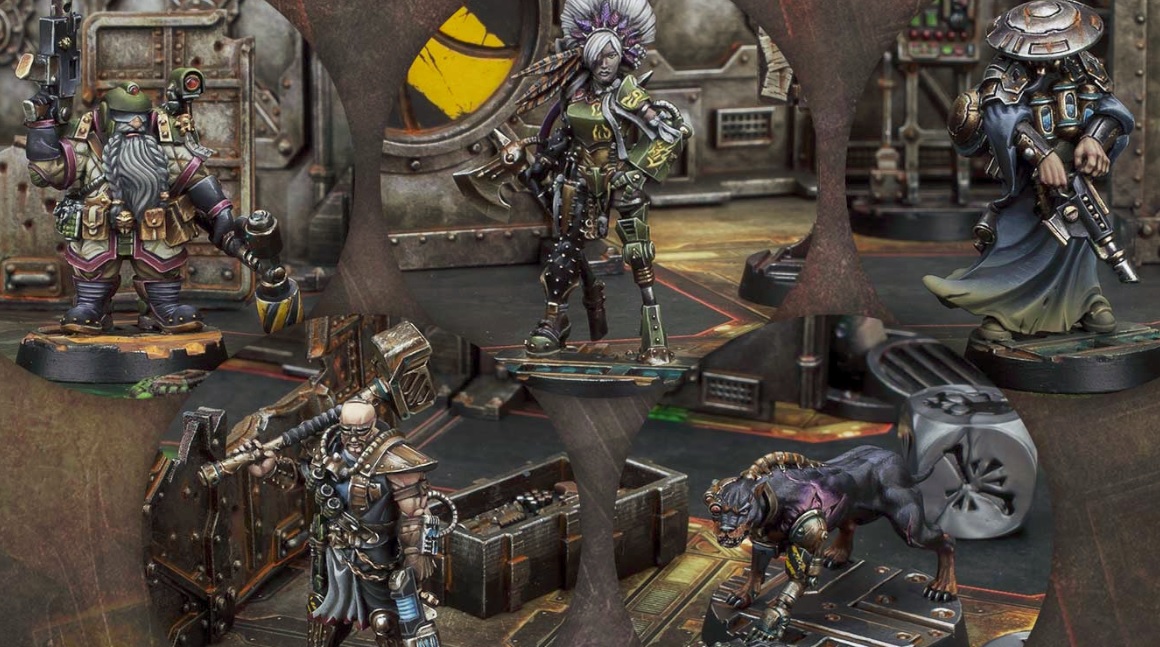 Necromunda is getting a few Mercs from Forge World this weekend – plus the Goliath Weapon Pack is available for Pre-Order. If you’ve got the creds, you can get the firepower! 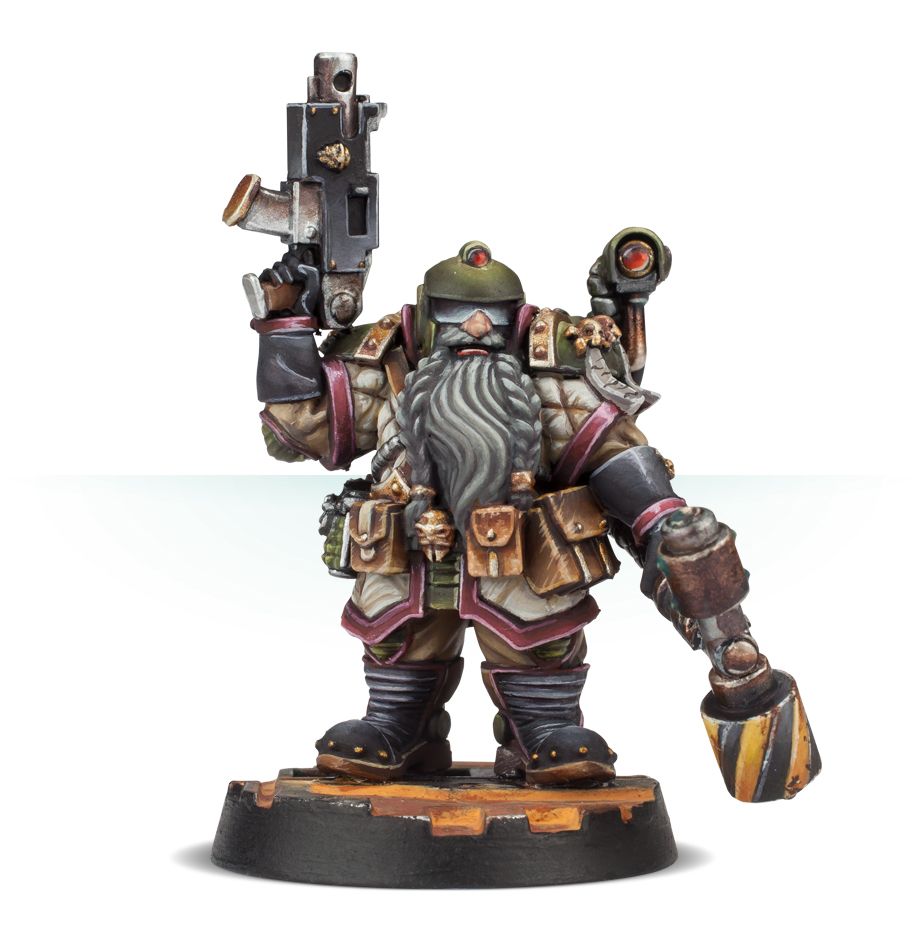 Despite the dire circumstances of his coming to Hive Primus, Grendl Grendlsen quickly established a new life, finding gainful employment as a bodyguard to various underhive figures. At length, he earned the right to practice as a sanctioned Bounty Hunter, and now serves any master who will pay his fee. Grendl is famed for protecting his charges from their rivals and subsequently claiming the bounty on the would-be assassins’ heads, and so far there has been no shortage of foolhardy rivals eager to test his skills, and his infamous hammer. 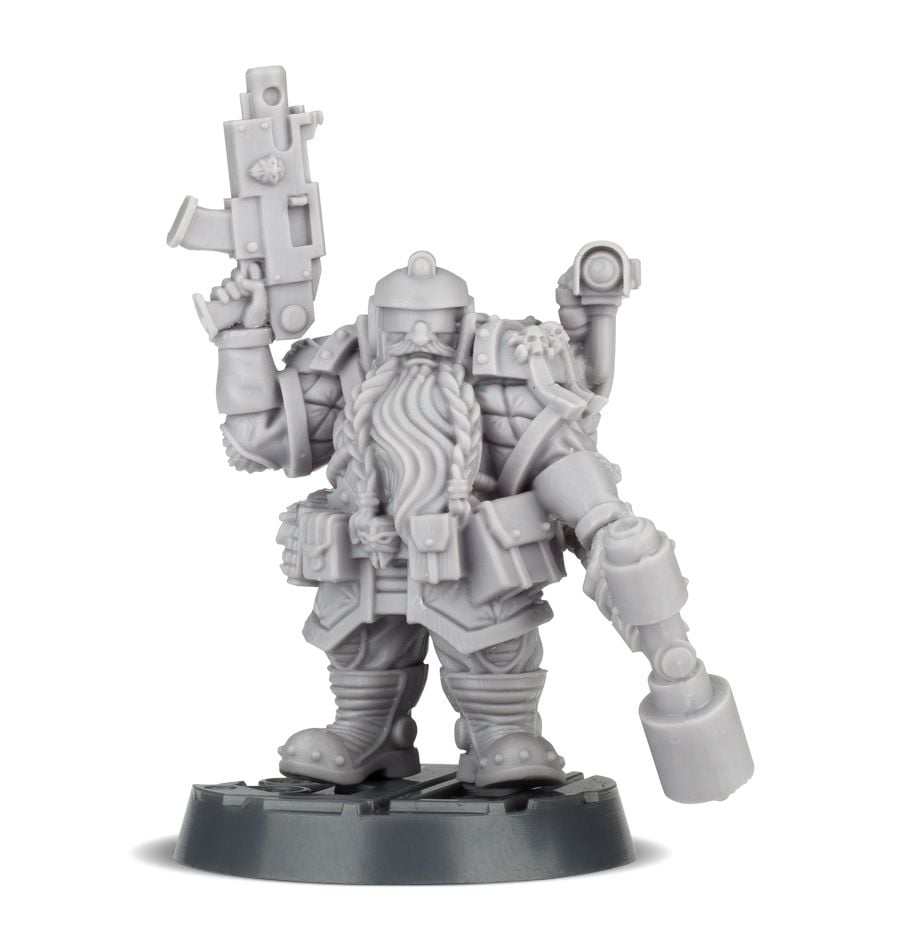 This multi-part resin kit contains the components necessary to assemble Grendl Grendlsen, a Squat Bounty Hunter. Reasonably diminutive and stocky in stature – he’s a Squat, after all – he’s impressively well organised and kitted out, far beyond some of his rival bounty hunters. From head to toe he carries loads of equipment: pouches and bags are attached to his belt (along with a few grenades…), his boots and coat are padded and well-armoured and he even features some nice tactical eye protection. He also carries a large backpack featuring sensors, and in his hand are the essential tools of his trade – a bolter in the right, and his legendary power hammer in the left. 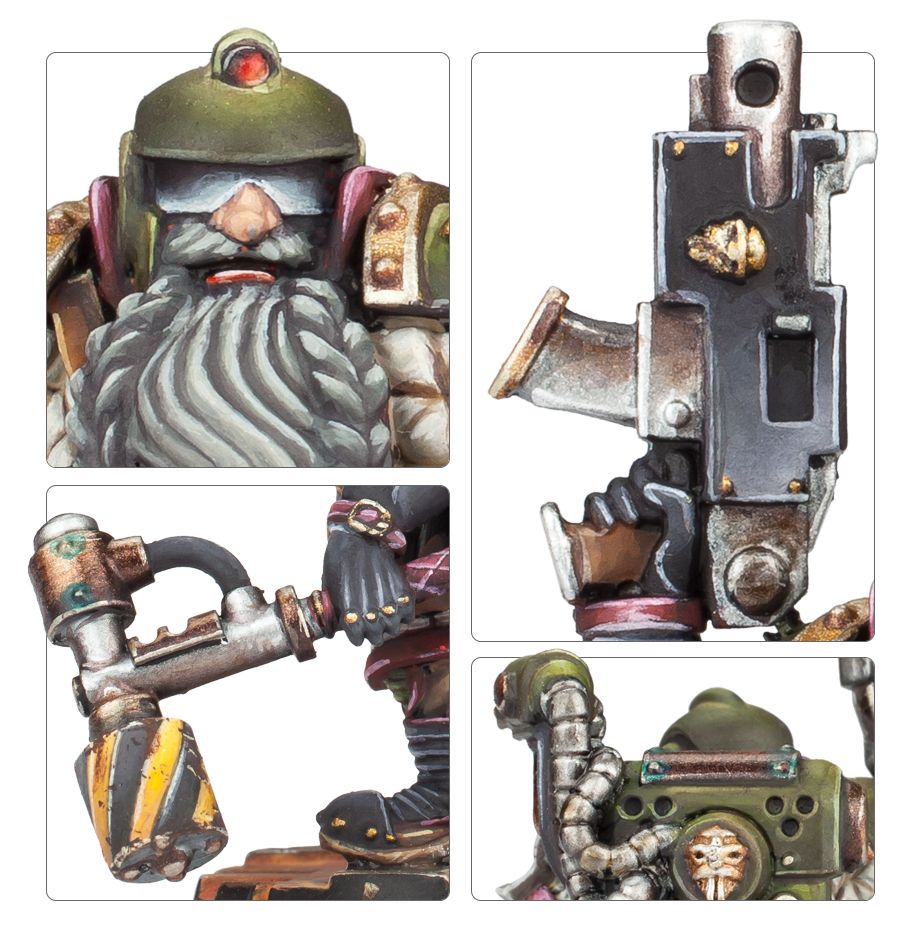 This kit comes as 4 components, and is supplied with a 25mm Necromunda base. Rules for using Grendl Grendlssen as part of any gang in games of Necromunda: Underhive are included. 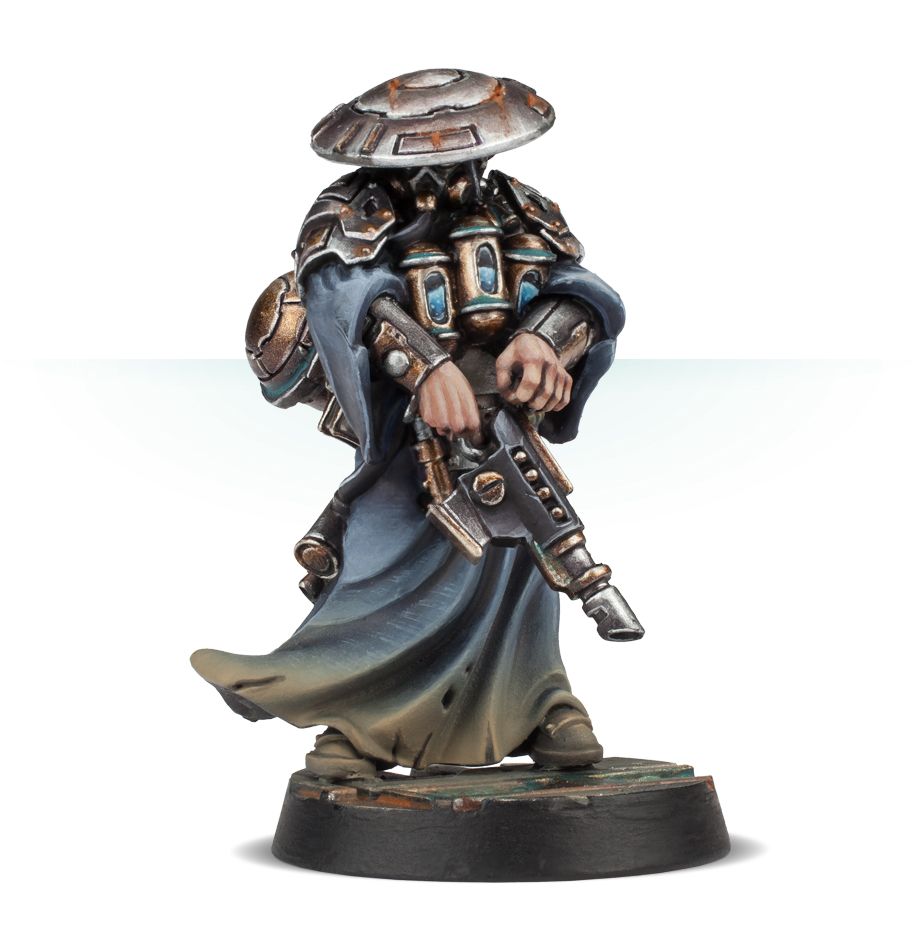 Eyros was once an underhive dome-rigger from Cogtown, one of the sweating, emaciated souls responsible for repairing the rusting pipe networks that fed the dismal settlement. Deep down in the sump wells, close to hive bottom, he found and donned a strange archaeo-rig which, though it gave him strength and life, it also gave him a burning thirst. As it turned out, while water can be found in many things, few things in Necromunda have quite as much as humans. Eyros leaves only dust and scrap in his wake, searching endlessly for fresh victims from which to strip every morsel of fluid. These days it is hard to tell how much of Eyros is left under the archaeo-cybernetics, and no telling what Eyros will become once the archaeotech is done with him. 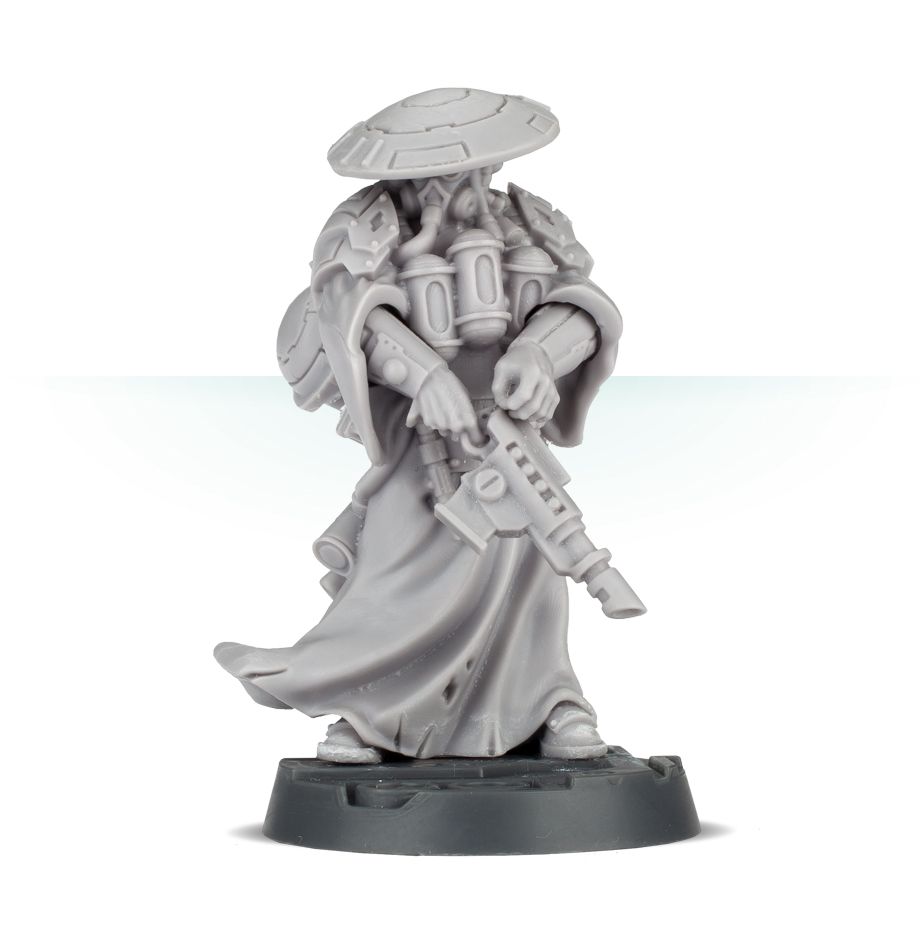 This multi-part resin kit contains the components necessary to assemble Eyros Slagmyst, a Bounty Hunter for use by any gang in games of Necromunda: Underhive. Barely visible under the vast array of archaeotech that irreversibly changed his life, Eyros cuts a mysterious figure, clad in a flowing robe. His wide-brimmed hat is in fact just the top panel for a series of cables, syringes and bone-flutes which have replaced almost his whole body – beneath the hat, lenses and a respirator peer out in place of eyes and a mouth. He is carrying a number of vessels, in which his precious supplies of water, stolen from the living bodies of others, slosh about. His hands – apparently the only part of him still fleshy – poke out from under the robe, clutching his gun. 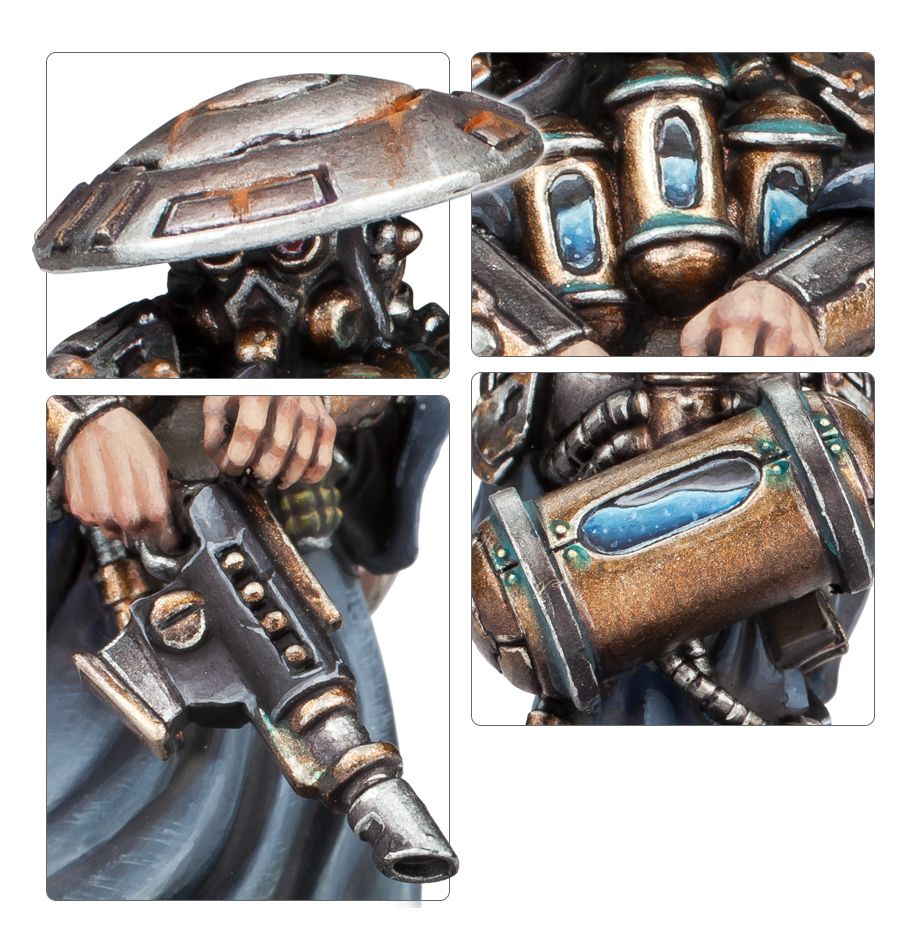 This model comes as 4 components, and is supplied with a 25mm Necromunda base. Rules for using Eyros Slagmyst as part of any gang in games of Necromunda: Underhive are included. 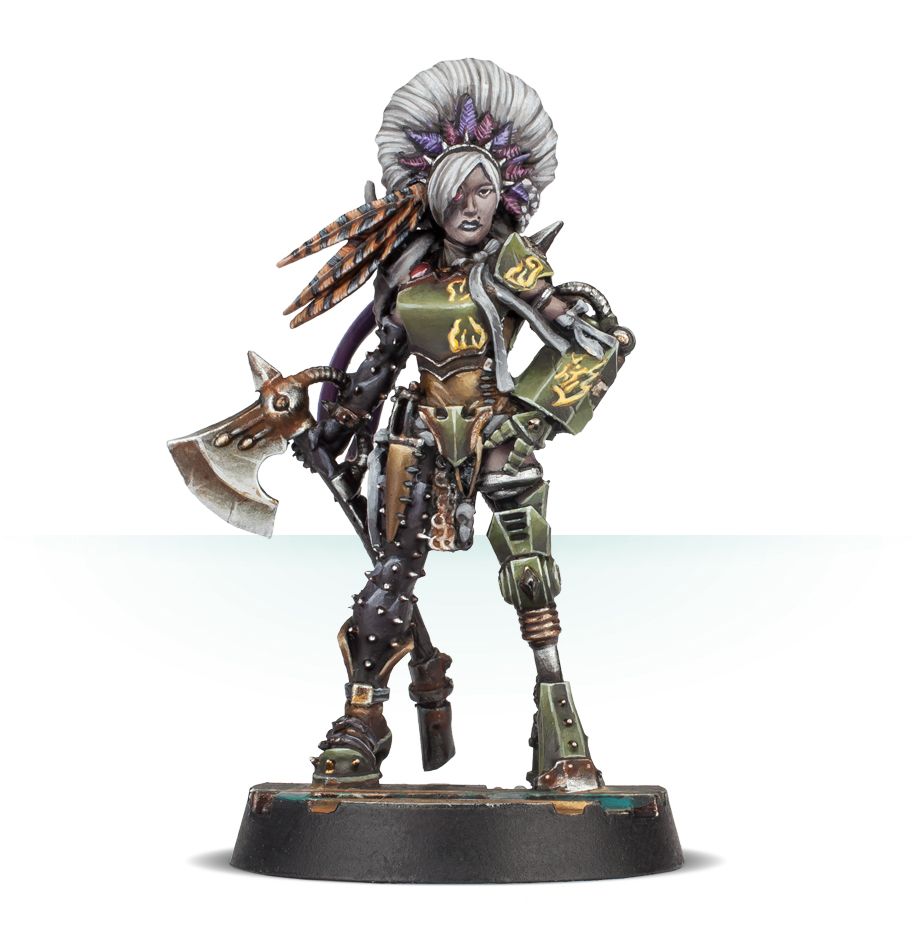 As the ancient saying goes ‘don’t mess with a woman wronged’, and Belladonna has been oh so wronged! The noble bounty huntress is one of the seven daughters of Orlena Escher – matriarch of the Seven Spire Killer Cult – and once one of the most feared assassins in the Palatine Custer. She stalks the underhive as a Bounty Hunter for hire, seeking her husband’s killers and the identity of the mysterious faction that sundered the alliance of Escher and Ran Lo before the ink was even dry on the marriage contract. 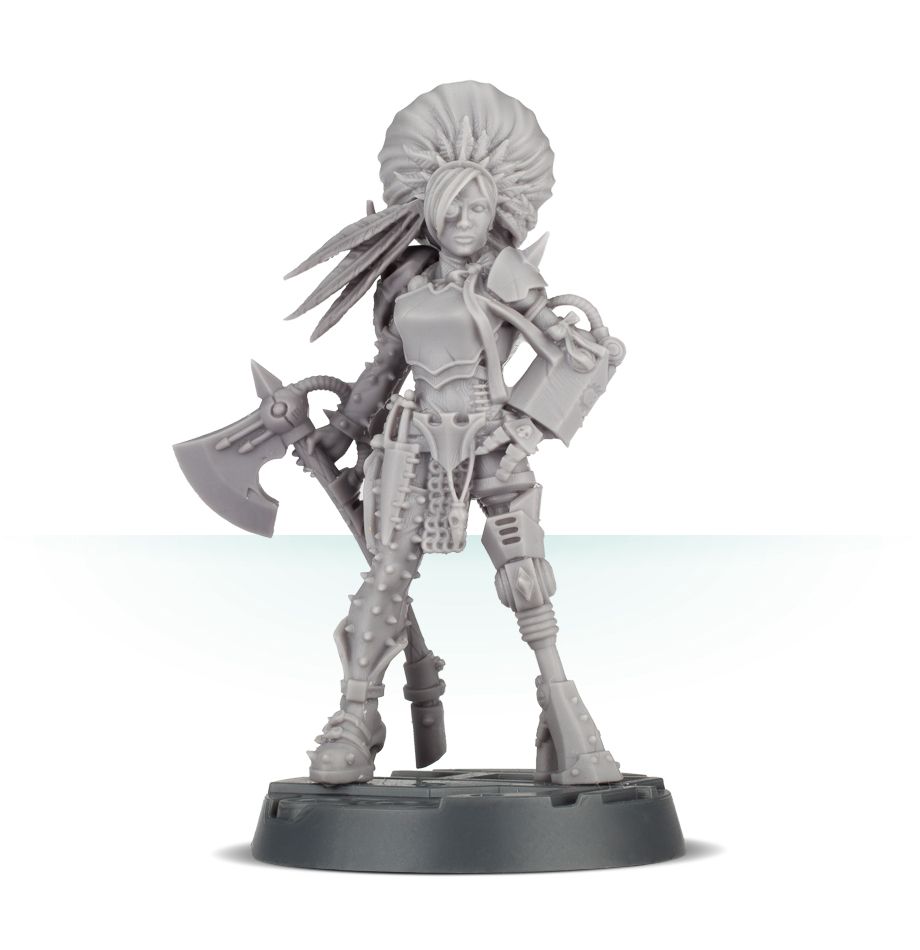 This multi-part resin kit contains the components necessary to assemble Belladonna, a Bounty Hunter for use by any gang in games of Necromunda: Underhive. Every bit the tragic, wronged bridal figure, she features a towering hairpiece, secured by a bow – this is where the romance ends, as even this bow has a skull for a clasp… Her left arm and leg are each replaced with bionics; spikes, claws and hydraulics are in place of weak human things like hands and feet. She’s not exactly heavily armoured, but the parts that are covered are covered in harsh metal studs and leather, and she confidently wields a large power axe in her right hand. 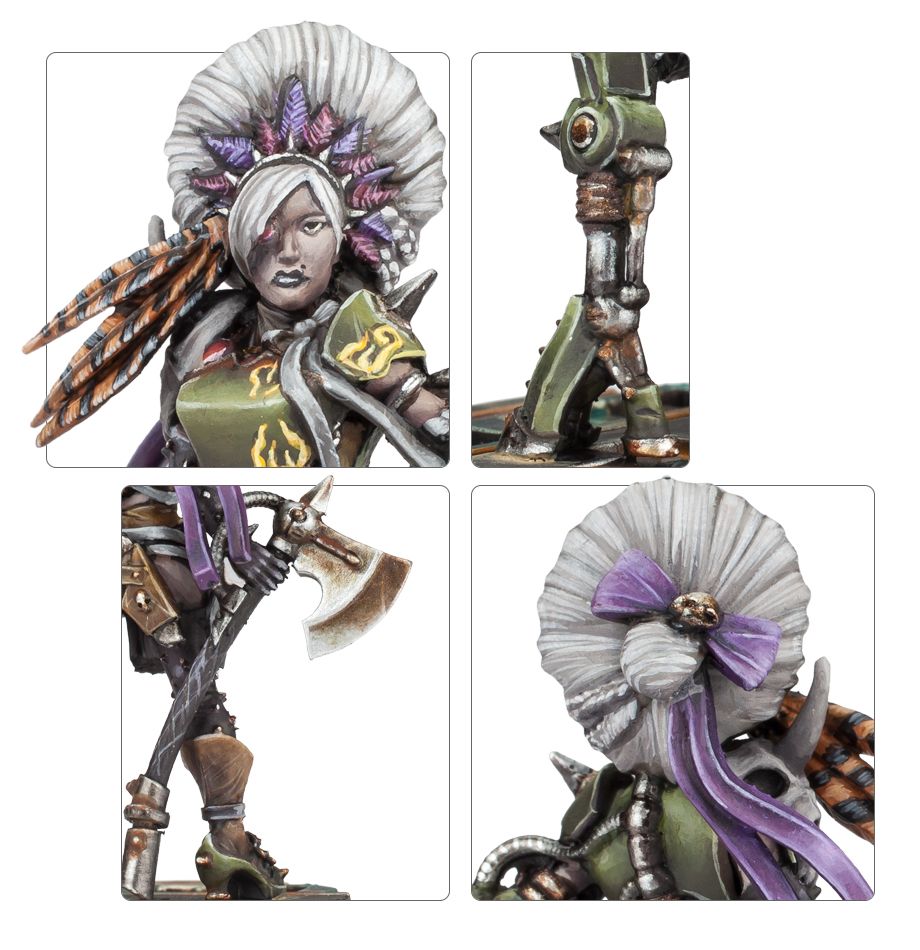 This resin kit comes as 4 components, and is supplied with a 25mm Necromunda base. Rules for fielding Belladonna as part of any gang in games of Necromunda: Underhive are included. 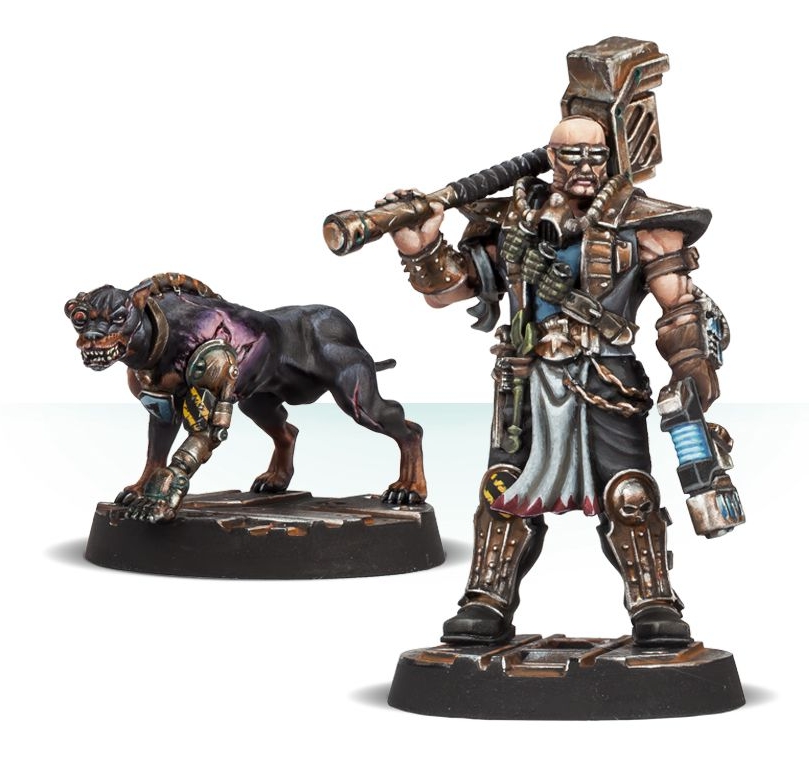 The Sump Dogs are one of the hardest gangs to ever ride the ash roads of the Spider Points, and their success can be attributed to one man: Slate Merdena. Slate controls a dozen Hive Primus Ash Gates in the name of House Orlock, and has earned a reputation for being nigh unkillable – having survived bullets to the chest, blades between the shoulders and even being thrown under the wheels of his own rig. Often the mere sight of Slate and his faithful Cyber Mastiff Macula, are enough to send enemies running, lest the end their days as a mile-marker on the Spider Points, like so many before them. 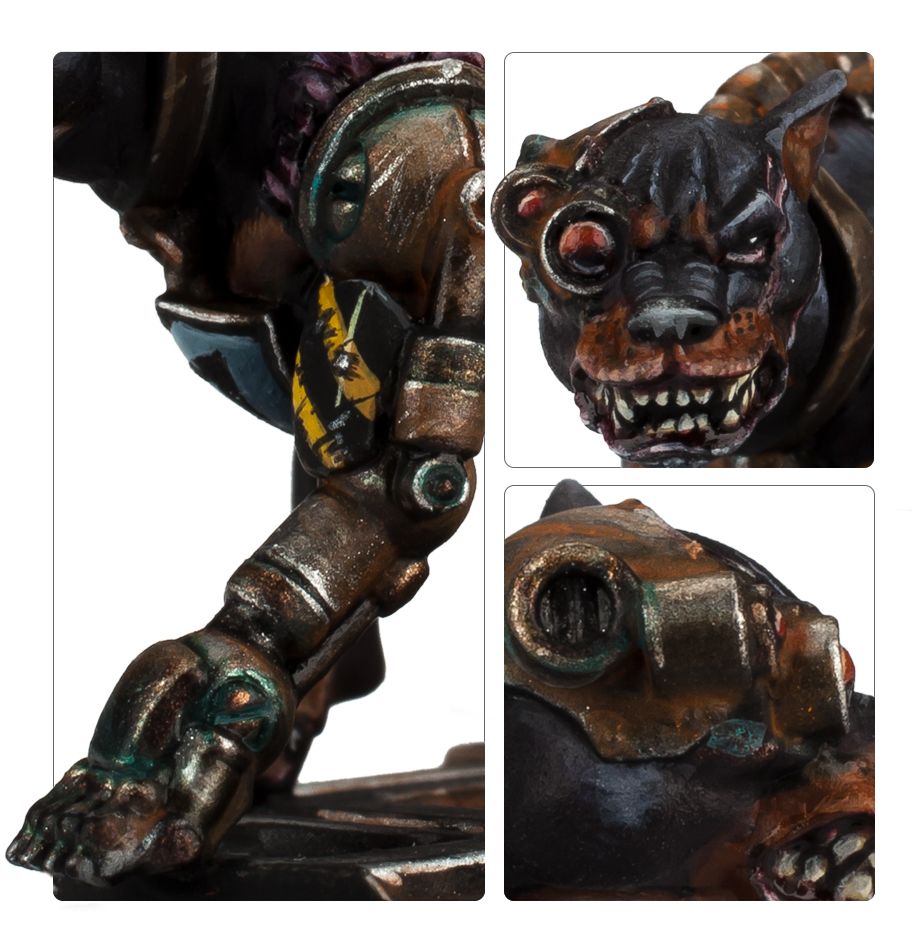 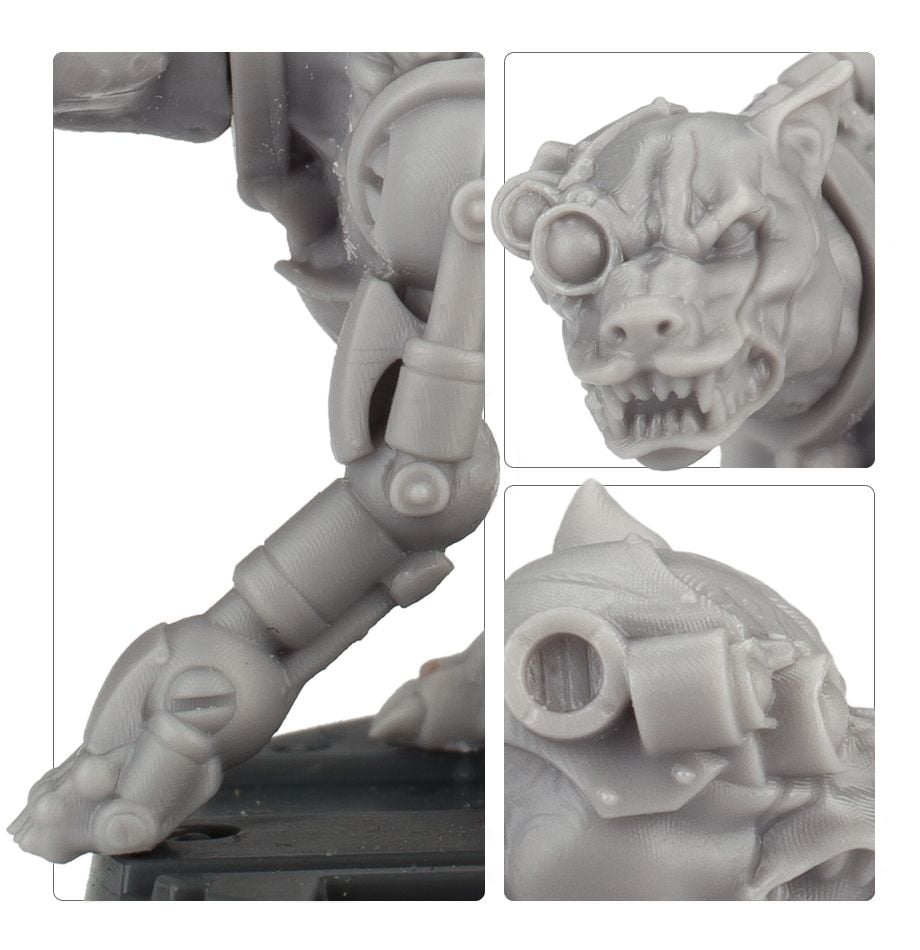 This multi-part resin kit contains the components necessary to assemble Slate Merdena – an Orlock Road Boss – and Macula, his faithful Cyber Mastiff and Exotic Beast. Slate Merdena is a shining example of Orlock leadership – decked out in standard duster jacket, heavy boots and slit-eye goggles, he’s carrying a wide array of tools, grenades and chains on his waist, with a plasma pistol by his side in his left hand and a large hammer slung over his right shoulder. Macula is a different proposition entirely; though recognisable as a dog, he has undergone countless augmentations. His front left leg has been replaced with a powerful cybernetic limb, around which the flesh is giving way to metal, and his metal spine is visible at the base of his neck. Other than this (well, and the sensor array in place of his eye), he’s a fairly standard pooch, albeit one with frankly irresponsible levels of muscle… 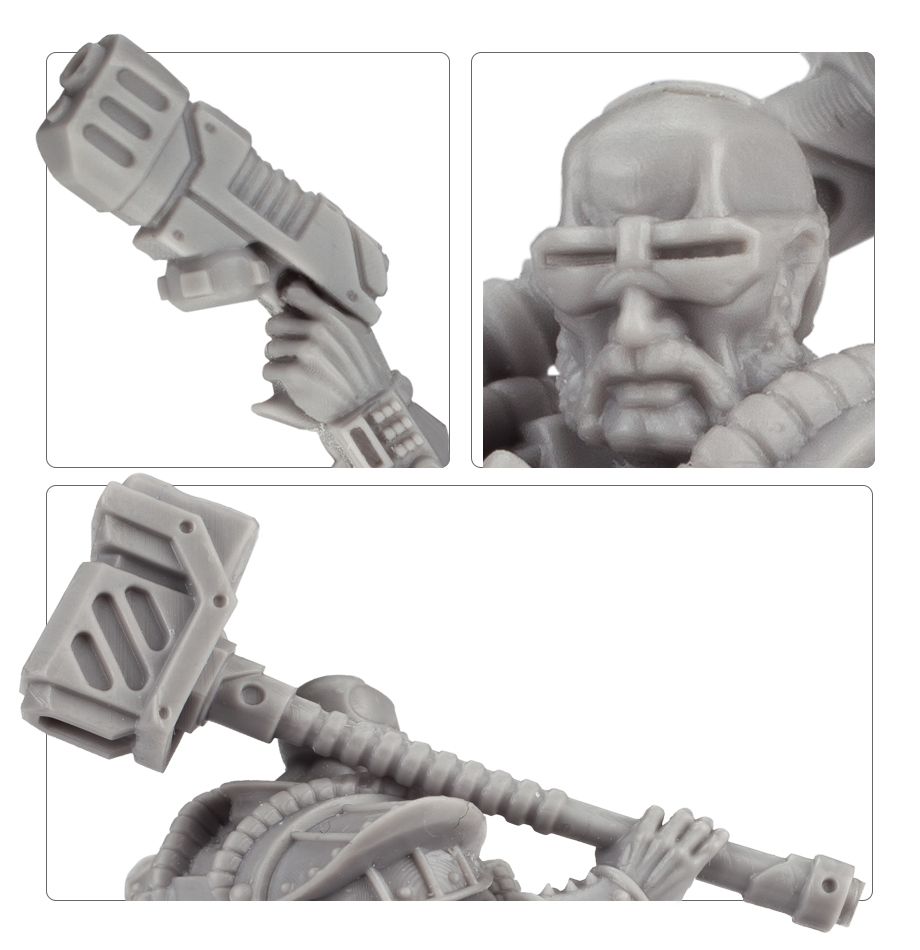 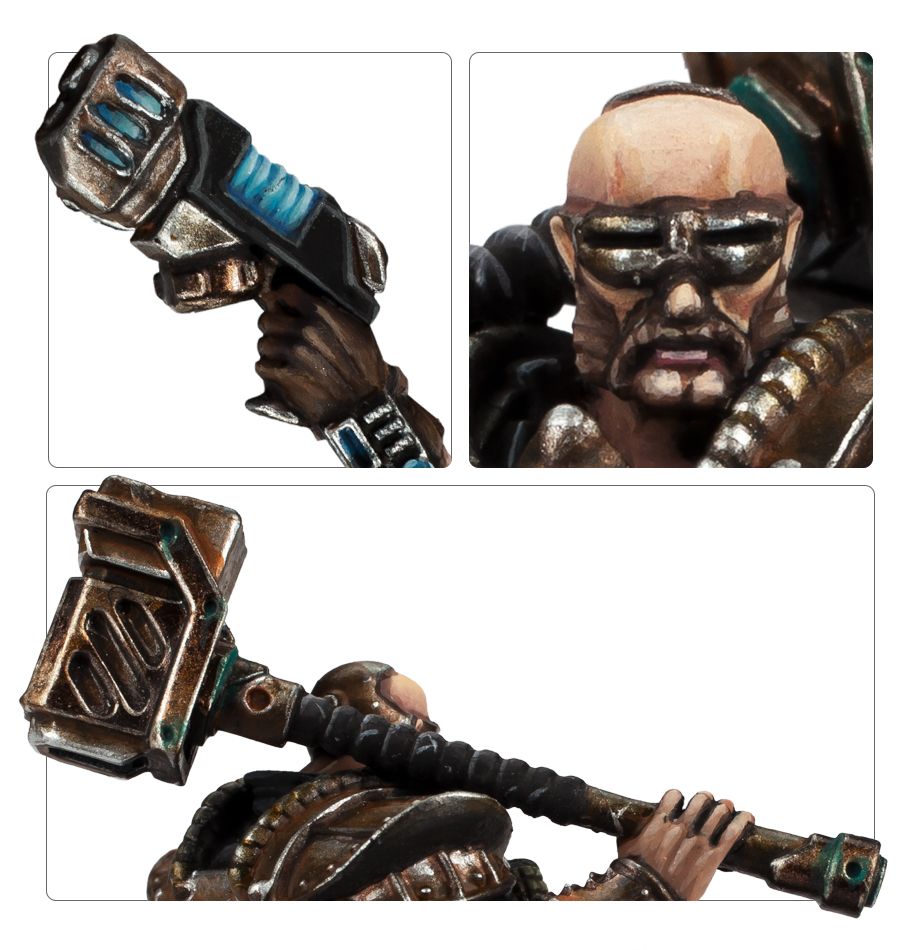 This kit comes as 8 components and is supplied with a 25mm and a 32mm Necromunda base. Rules for using Slate Merdena as a House Orlock-specific Hired Gun are available in Gang War 2, and rules for using him as an Orlock Leader with his Cyber Mastiff are available as a PDF download. 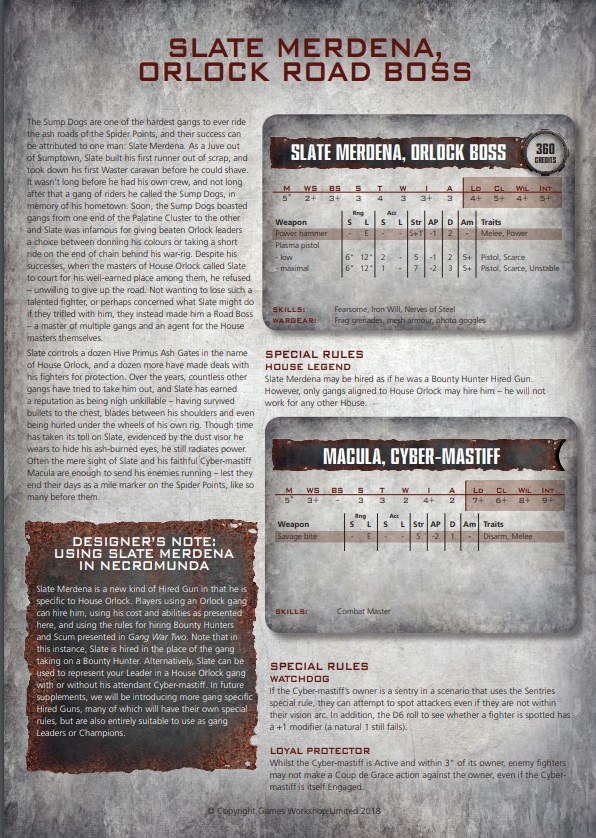 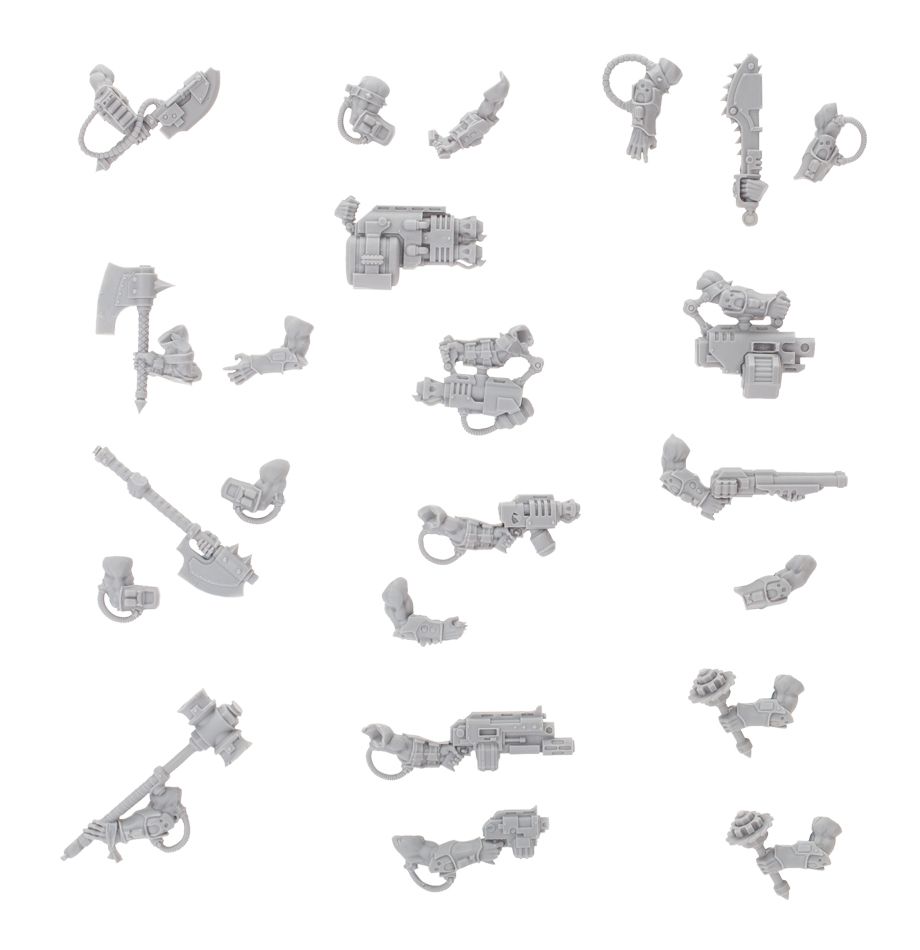 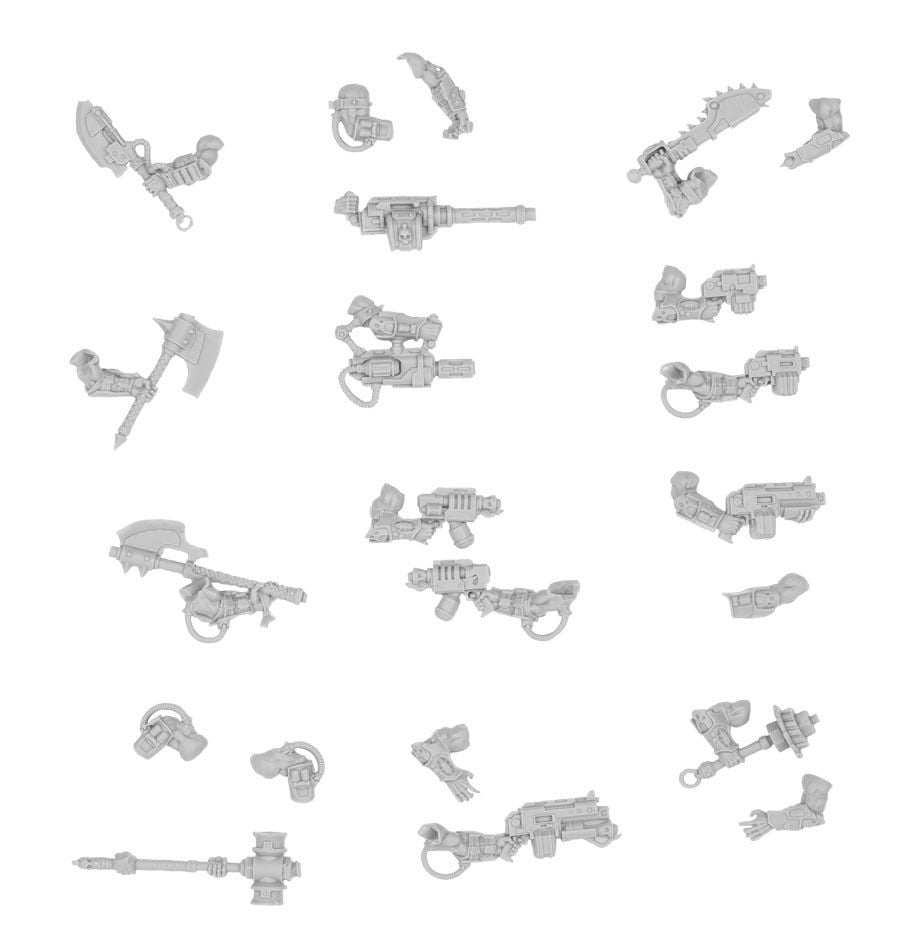