Arkham Horror the board game is getting a new edition and Fantasy Flight Games is previewing two of the scenarios included in the box. Face the madness and fight back against the otherworldly darkness in Approach of Azathoth and Echoes of the Deep.

Fantasy Flight Games is changing the game of Arkham Horror with the new third edition release. It’s a new board, new layout, and all new scenarios to play out.  There is a whole lot more to this game than just discovering clues to seal rifts with Elder Signs this time around.

There are four new scenarios included and each one provides a different experience every play through. With branching paths that change based on player choice and performance, you’ll be in for a new story that unfolds as you step into the role of the investigators. Strange days are afoot in Arkham! 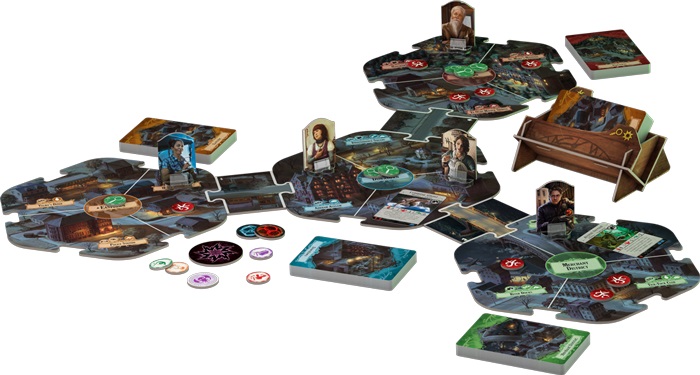 Today, we are taking a closer look at two of the scenarios you’ll find in Arkham Horror. We’ll explore what makes them different and some of the mechanics that make each play through different. 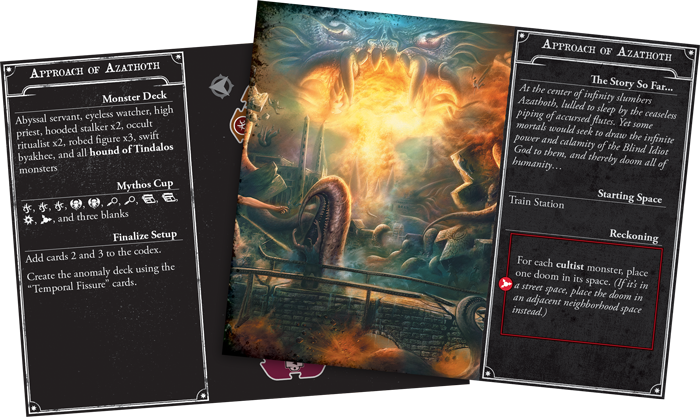 What makes Approach of Azathoth unique is that you’ll be playing with Anomalies and Deja Vu in play on the codex – or the “documentation” of your story. It’s where players will place the archive cards that help to add some context to the narrative. These cards are both guides and goals. As you play, you’re achieving or failing these goals determines which future cards are added to the codex. 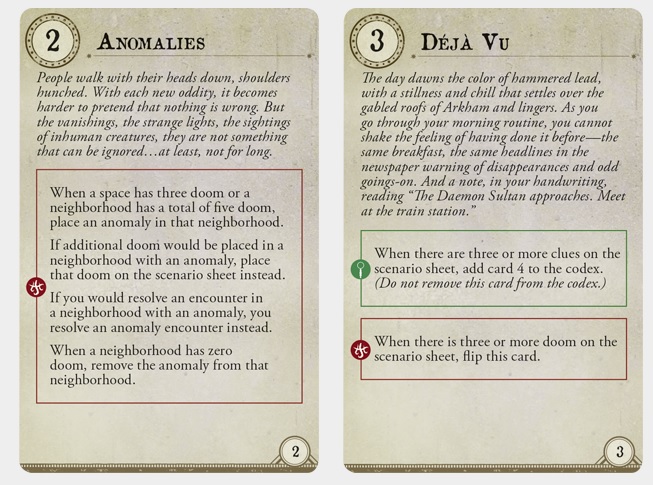 In this scenario, Cultists are trying to bring about the arrival of Azathoth and that would be inherently bad for the rest of the world. The investigators are out there trying to stop them and to do that, they have to combat the doom that is literally spreading through the city. There are different ways to do that but players will also have to contend with Temporal Fissure anomaly cards as well: 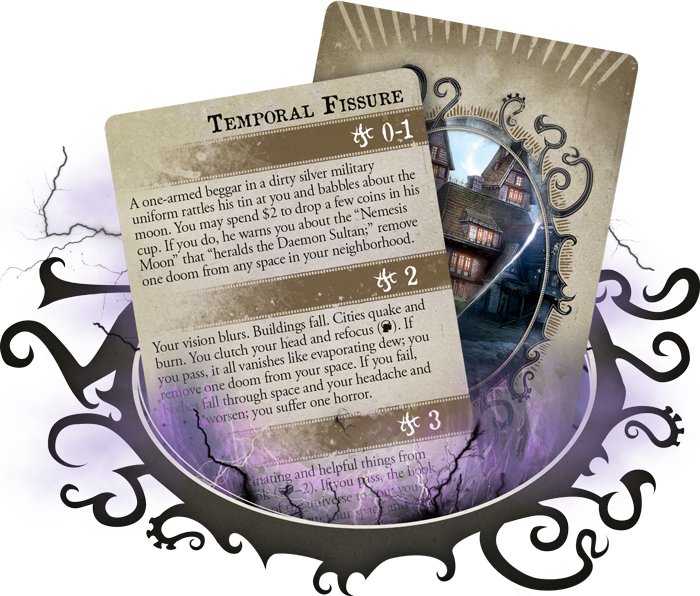 Can you handle the Cultists, the Anomalies, and the spreading Doom in the city? The clock is ticking…

Echoes of the Deep 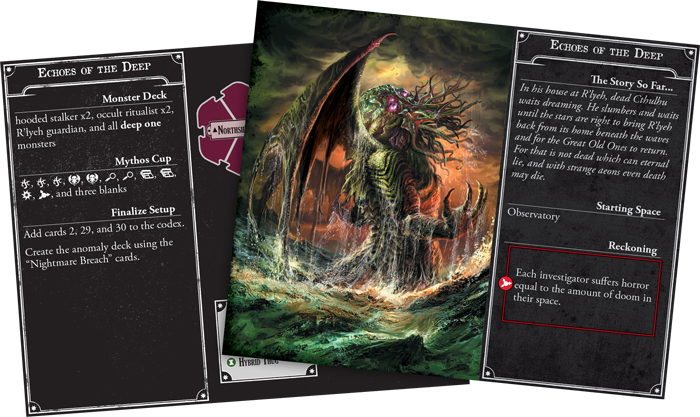 Few Ancient Ones inspire as much fear as dread Cthullhu, slumbering, waiting to return and rip the world asunder. The signs of this Ancient One’s approach have already begun showing themselves. As the stars in the sky shift and morph in strange ways, and its citizens increasingly become more bizarre, what secrets does the city of Arkham hold for our investigators? Find out in Echoes of the Deep !

Well it looks like someone is FINALLY waking-up from nap time. That spells disaster for the rest of us as Cthulhu stirs. In this scenario, the Doom has more of a direct impact on the investigators because it can actually deal horror damage to them based on how much is in the same space. If you don’t manage the Doom wisely, investigators could be one bad Reckoning away from getting knocked out of the game! 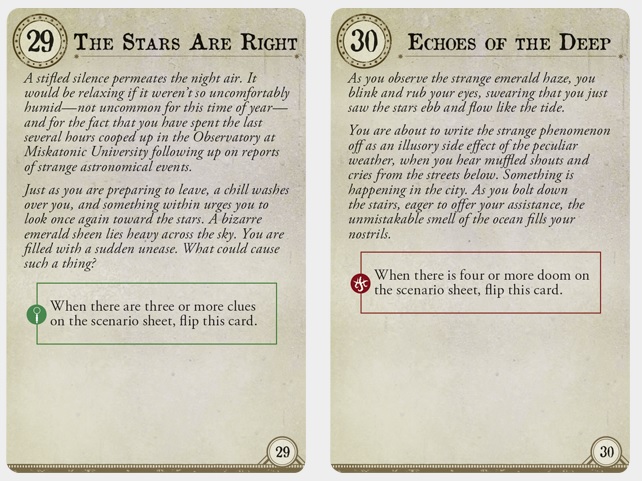 Those pesky Reckonings aren’t the only attacks the investigators will face either – minions of the Deep Ones will attempt to beat you into submission. And if that wasn’t bad enough, watch out for those Nightmare Breach encounter cards, too! 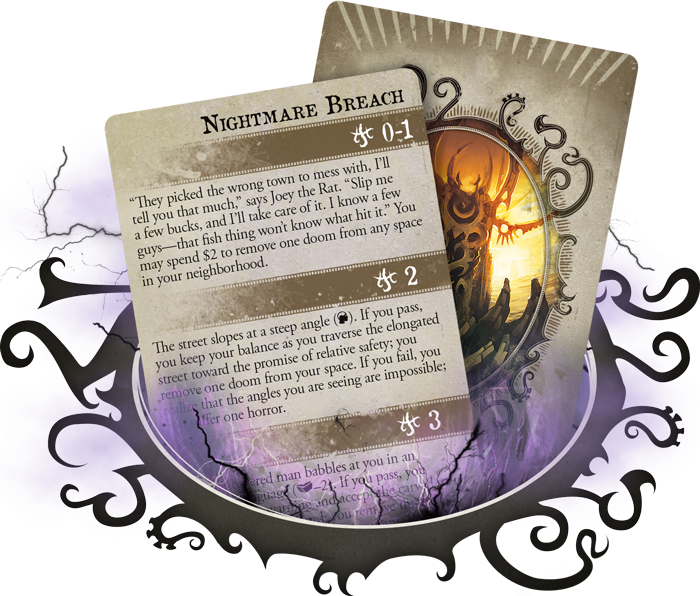 I’m really looking forward to this game. The new scenarios, the modular board, the branching narrative – all of those things add many new layers to the game and I can’t wait to start peeling them back! Are you ready for Arkham Horror Third Edition? 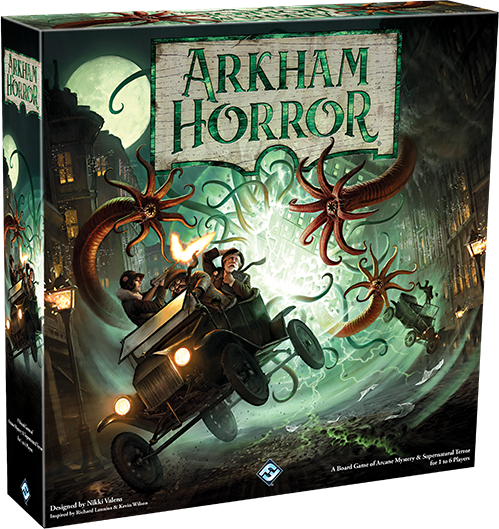