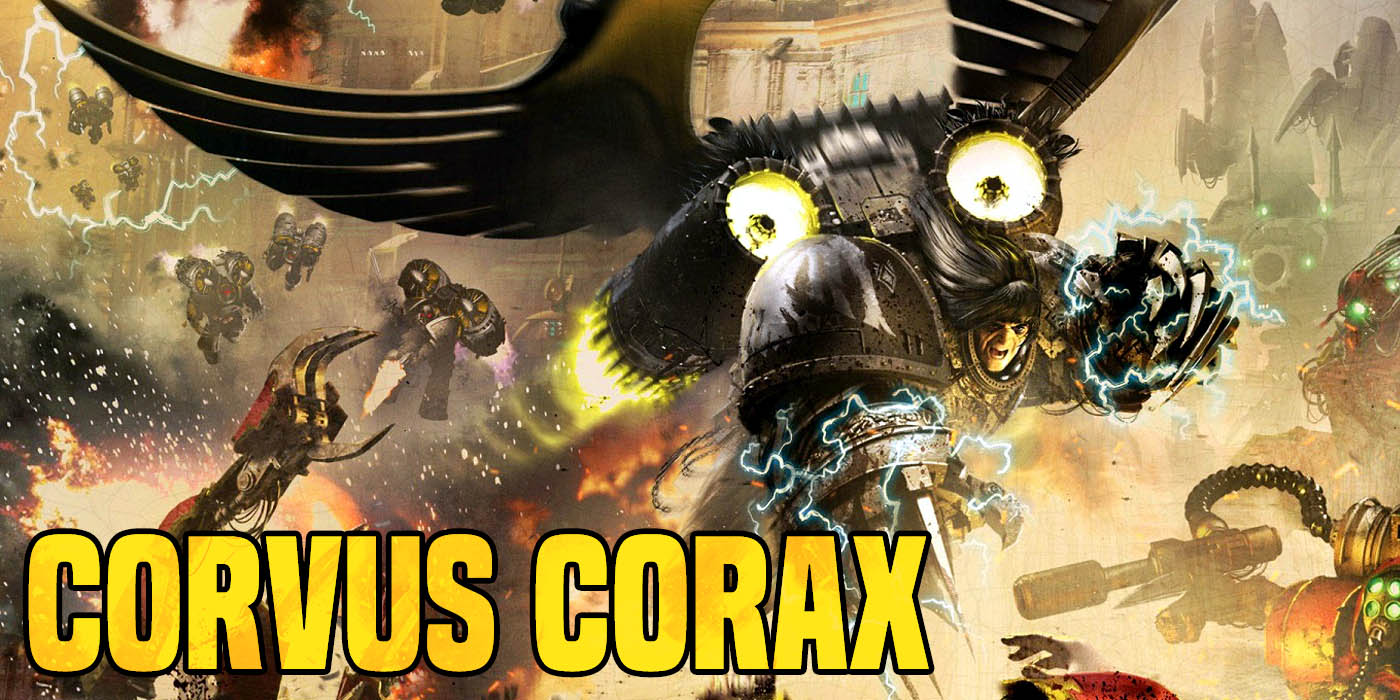 Today Loremasters, we speak of the Master of the XIXth, Corvus Corax – taciturn, silent, and lost without a trace.

Corvus Corax is the Primarch of the Raven Guard Space Marine Legion. Growing up to become a revolutionary for the workers of Lycaeus, Corax became a master of guerrilla warfare and hit-and-run tactics. He remained true to the Emperor during the Horus Heresy, and as such his Legion took some of the most massive losses of the war during the Drop Site Massacre. 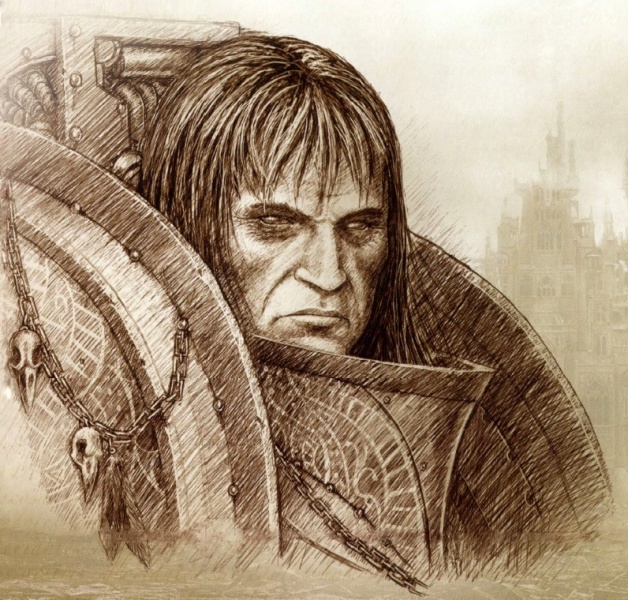 Corvus Corax was separated from the Emperor while still an infant by the four Chaos gods. He was discovered on Lycaeus, the desolate moon of the planet Kiavahr. At this time the planet was a technologically advanced Forge World, providing its city-sized factories with minerals extracted from the non-atmospheric moon by legions of mine-slaves.

Educated to be a leader as well as a rebel, he rapidly began his task by organizing the workers into fight teams, promoting the best of the men as squad leaders. He began building vast stockpiles of weapons, concealing them in numerous secret caches. He ordered a campaign of psychological warfare, launching riots and strikes to build up followers in the worker’s rebellion and to stretch the garrison strength and morale to breaking point. Waiting for the opportune time to strike, Corax’s forces launched their attack, taking key security points and destroying them by crude force or sabotage, killing every man of the Lycaeus defense forces.

When Kiavahr’s rulers struck back, Corax was ready for them. He outmaneuvered and ambushed their forces on Lycaeus with his battle-hardened warriors, crushing their supply lines and striking the five biggest cities in Kiavahr with one atomic mining charge each. The charges were embarked on small transport shuttles and reached the surface via a supply gravity well. Soon, their forces nearly destroyed, their vast factories unable to produce anything due to the minerals shortages, the Tech-Guilds collapsed in a civil war. While thousands had died in the nuclear bombardment of Kiavahr, millions of its people had been freed. Celebrating their victory, the inhabitants of Lycaeus renamed their home “Deliverance.” 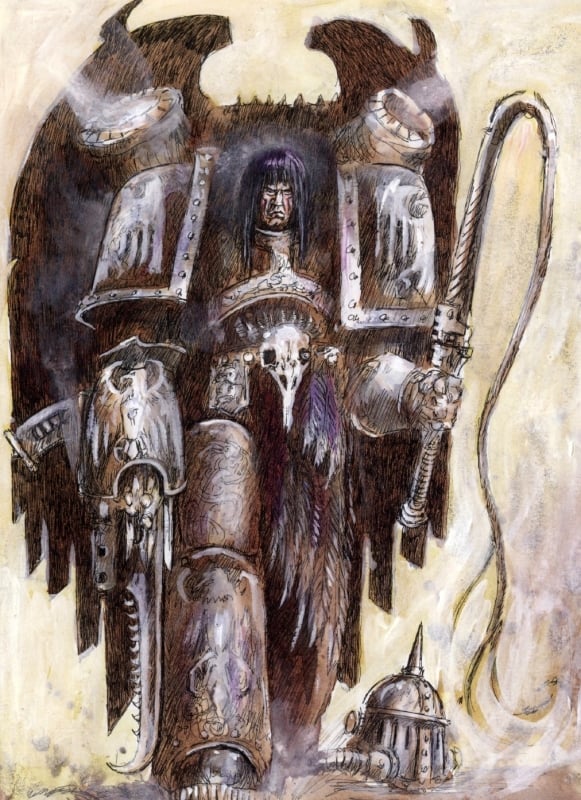 It is said that the Emperor appeared on Deliverance that day and, after a day and a night with his son, appointed him Primarch of the Raven Guard Legion. Nothing is said of their conversation, but one condition of Corax’s acceptance was the help of the Emperor in the task of bringing peace on Kiavahr. Soon the Adeptus Mechanicus stepped in, and the world was rebuilt to the benefit of the Imperium while the black tower which once housed the guards of the moon became the Ravenspire, the fortress of the Legion.

During the Great Crusade, Corax’s talents for planning and sabotage were of great effect and the Raven Guard, frequently fighting under the orders of Horus, became renowned for an unmatched ability with covert ops, sabotage, infiltration and lightning strikes. But the pair never saw eye-to-eye, and after an argument, the two Primarchs nearly fought each other. Corax left Horus’s command. Corax also began to display great ill-favor and mistrust towards Terran-born warriors within his Legion as opposed to those from Deliverance. This was due to Corax’s disgust with the Terrans for their use of terror tactics, which reminded him of the Night Lords. Corax instead sought to transform the Legion into a force for the liberation of the oppressed. Corax began to “purge” Terrans by sending them on forgotten Crusades to the galactic rim and unexplored space. 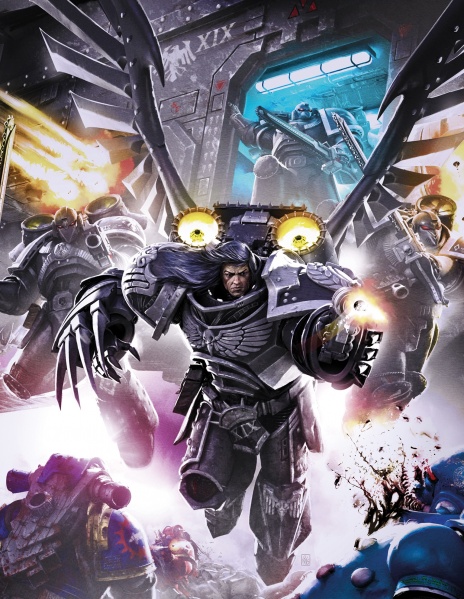 The Raven Guard primarch only met Horus again on Isstvan V. During the Drop Site Massacre, Corax was among the Primarchs leading the loyalist effort against Horus’ betrayal. In the battle he personally engaged Word Bearers Primarch Lorgar in combat, impaling him with his Lightning Claws. Just as he was about to finish Lorgar, Konrad Curze intervened and forced Corax to retreat.

Though grievously wounded and forced to fight a guerrilla war on Isstvan V for the next 98 days he escaped the slaughter with a handful of loyal Space Marines thanks to the arrival of a small Raven Guard navy led by Captain Branne Nev. Captain Branne had been left as a reserve on Deliverance, and he departed the moon only due to strange dreams haunting the nights of Praefector Marcus Valerius, the commander of Therion Cohort, a loyalist Imperial Army Regiment. Unbeknownst to both sides, the Alpha Legion had allowed Corax’s escape to further the plans of Alpharius. On quitting the Isstvan System, Corax sent back to Deliverance all the remaining ships while he himself headed to Terra to seek the counsel of The Emperor. The Primarch was desperate as the Imperium was collapsing, his Emperor needed warriors that Corax could not provide. Moreover, Corax was not granted permission to see The Emperor due to his workings on the human-made corridor to the Eldar Webway.

The Emperor, sensing his son’s desperation, was somehow able to divert part of his psychic might to grant Corax what he was looking for.  Corax was successful in this task and what he obtained was the common genome all primarchs shared. Once back on Deliverance, Corax tasked his Chief Apothecary Vincente Sixx of retrieving the correct Raven Guard genome and start the direct implantation on fresh recruits.

With this knowledge, around 500 new, war-ready space marines were created in a few weeks.  Some Astartes of the Alpha Legion, in a plan orchestrated by the primarch Alpharius Omegon themselves, infiltrated the Raven Guard after the Drop Site Massacre. Of course, since free to act as best suited, Alpharius Omegon had in mind also to recover the secret knowledge to expand their legion too. With the help of renegade Mechanicum magos Unithrax and his forces on Kiavahr, the Alpha Legion tainted the original genome recovered from the laboratories of The Emperor on Terra. This was accomplished by introducing a virus-vectored mutagen based on daemonic blood. Thus, the successive implantation’s resulted in still operational but deeply-mutated Astartes exhibiting scales, horns, fangs, tails, overgrown muscles, and similar features. After this outburst of mutations and the discovery of the Alpha Legion infiltrators, Corax decided to stop the rebuilding of the Raven Guard and led his warriors, along with all the war capable mutated marines, with small squads striking like lightning on the enemy weak spots.

Corax still was committed to combating the forces of Horus. He reassembled the entirety of his surviving Legion at the Dexius System. There he contemplated on the future of the Raven Guard, with many of his legion wishing to return to Terra to aid the Emperor against Horus’ offensive. After evading a Night Lords attack, Corax was again influenced by the visions of Marcus Valerius who saw that the Space Wolves were on the verge of destruction. Corax led the Raven Guard in the Battle of Yarant to aid the Space Wolves against traitor forces. 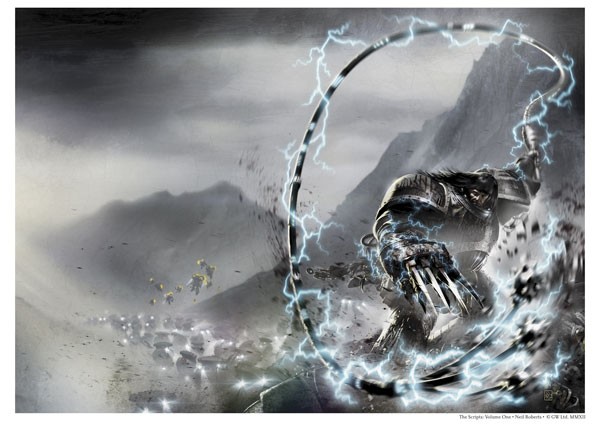 When ultimately he managed to rebuild his Legion, the Horus Heresy had ended and Roboute Guilliman‘s Codex edicts that the Legion had to be split into smaller Chapters. Knowing that Guilliman’s vision was true, Corax split his forces but remained unable to forget the growling monsters that he had personally created. After pondering for hours as to what should be done he decided to administer the Emperor’s peace to the ones who remained, praying for their souls and his. Then wracked with guilt, he locked himself in his chamber in the Ravenspire begging for the Emperor’s mercy.

Nobody knows if he received the absolution he required, but a year to the day after he had locked himself in, he left the tower and Deliverance on a course toward the Eye of Terror, never to be seen by the Imperium again. His last recorded words were “never more.” 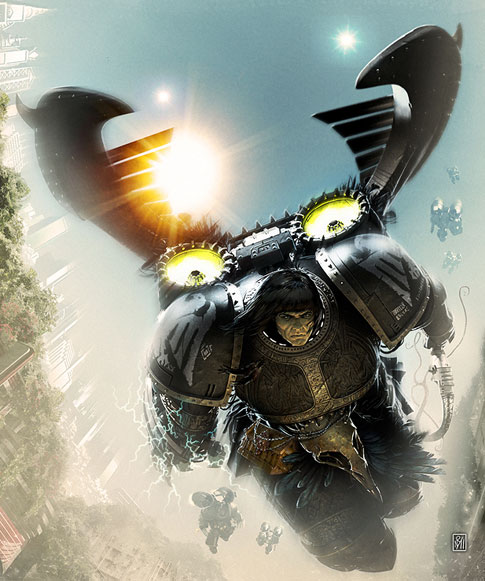 In battle, Corax favored a Heavy Bolter for long-range killing, which he hefted and aimed as easily as an ordinary man would lift a battle rifle. He wielded two Archeotech pistols as additional firepower. For close quarters fighting he carried a three-headed power whip specially crafted for him by the Adeptus Mechanicus as well as a pair of Lightning Claws known as the Raven’s Talons. In the absence of these weapons, he was more than able to tear apart enemies with his bare hands. Corax wore a jet-black suit of Power Armour equipped with a Jump Pack known as The Sable Armour. The Sable Armour was also capable of masking his energy signature and could be used to jam nearby enemy communications.

Corax’s most potent ability, however, was his “wraith-slip,” also called a Shadow-slip or Shadow-Walk. This allowed him to seemingly meld with the shadows around him, disappearing from the view of his foes before striking unseen. Following his reappearance sometime after the Heresy, Corax became empowered by the Warp itself. Able to contend with the Daemon Primarch Lorgar, Corax is now capable of transforming himself into shadows, darkness, and flocks of ravens.

Learn More of the Raven Guard

~One day Corax may return – when he decides to make himself visible to the galaxy once more.