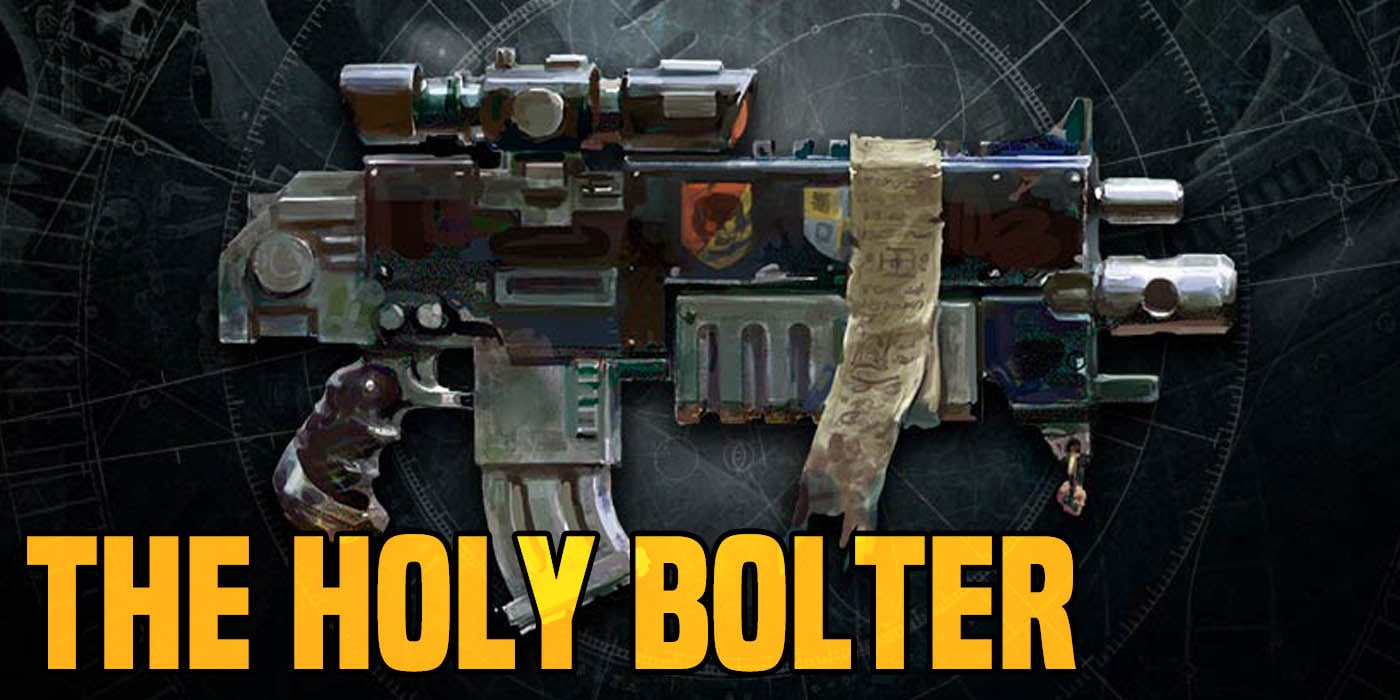 Today Loremasters, we speak of the massive family of boltguns – the will of the Emperor, wielded by the Adeptus Astartes and other elites forces.

For the Astartes, the boltgun is a holy symbol of the Emperor‘s wrath.

The following information mainly concerns Bolters manufactured by/ for and/ or used by the various factions and organisations of the Imperium, not for bolters or bolter-like weapons manufactured by Xenos, which are dealt with in the relevant paragraph at the end of the article.

The original Imperial boltgun was an invention of the Emperor of Mankind‘s own design.

Like other Space Marine weaponry, Astartes boltguns are designed around their superhuman physique. The weight of each weapon would require most humans to use a supporting brace, with hand-grips larger than any normal human could manage. However, even if a normal human were to fire the boltgun, the resulting recoil would rip their arm from its socket. Normal humans found to be in possession of even a single Astartes bolt round, much less a boltgun, can expect a swift justice for their crimes.

Note that some of these are only used by specific Space Marine Chapters.

The artifex pattern bolter is amongst the most potent of its kind. Fitted with multi-spectral augur lenses, a silacharibdis shot selector and a gene-grip bioveritor, its warlike spirit responds only to its rightful owner. It is known to be used among the ranks of the Deathwatch.

The Blood Angels and their successor Chapter use a wrist-mounted, drum-fed variation of the standard boltgun for their Sanguinary Guard called the Angelus boltgun. It uses Bloodshard shells as ammunition. This is not to be confused with the Angelus Bolt Carbine which is not a boltgun and not a Space Marine weapon.

The Mk.II Cawl Pattern Bolt Rifle is a new version of the venerable Boltgun developed in the closing days of the 41st Millennium for the Primaris Space Marines. Named after MagosBelisarius Cawl, the large Cawl-pattern Bolter is said to be re-crafted and re-engineered to perfection. The Bolt Rifle is a larger and longer-barreled upgrade of the standard Bolter, allowing for longer range and armour-piercing capability.

The Oculus Bolt Carbine is a variant of the Cawl-Pattern Bolt Rifle used by Vanguard Lieutenants. The Carbine is equipped with a sophisticated Occulus sight array.

The Space Wolves utilize a pattern of Boltgun produced on their homeworld of Fenris, decorated with the skulls of Fenrisian beasts.

The Gilded Boltgun is a master-crafted artificer weapon of unsurpassed beauty and artistry; a weapon fit for a Sector Lord, or a Space Marine Captain. No record remains of how this weapon made its way to the Jericho Reach, but it has been used by some of the most heralded Ultramarines to serve in the Reach.

The model currently used by most Space Marines is designated the Astartes MK Vb Godwyn pattern. The Godwyn-pattern bolter has a built-in ammo counter and uses a Sinister/Dexter locking mechanism with a sickle-shaped magazine carrying 30 rounds. It fires the standard Astartes .75 calibre bolt, composed of a diamantine tip, depleted deuterium core and mass-reactive detonator, typically in bursts of four rounds. Other features include a palm-print sensor for genetic identification, as well as an integral targeter that links with the autosenses in the Marine’s helmet for superior accuracy. It can also be upgraded with weapon accessories such as the M40 Targeting System.

Other Godwyn patterns include the Astartes Mk IIIa Godwyn Pattern, an older version, still used by the Dark Angels Chapter.

N.B. Due to the ambiguous labelling of the images it is not possible to say if the Minotaurs weapons shown here is a “Godwyn Ultima” or an “Ultima”.

The Minotaurs are known to have used Godwyn Ultima bolt weapons during the Badab War – it is unclear if these are Boltguns or Bolt pistols. The Exorcists used Godwyn-Ultima bolters during this war.

The Deathwatch uses the Hesh-pattern boltguns since M36. This weapon was originally designed by Magos Cymbry Jamis of the Adeptus Mechanicus in recognition of the Deathwatch’s services. The bolters of this pattern are more compact than other weapons of its type and show exceptional craftsmanship. Due to their smaller size they are well-suited for fighting in confined spaces and they are also favoured by vehicle crews and by certain Assault Marines. The bolters incorporate an integral folding stock, motion predictor, and prey-sense sight.

N.B. The picture shown is located next to the article about the “Hesh-pattern,” but does not have a description confirming that it is this pattern.

The Mark III or MKIII pattern boltgun is known to exist as Badab Primaris Manufactura Issue and has been used during the Badab War by the Astral Claws.

N.B. It is unknown if and which pattern this weapon would be as it is just referred to as “standard.”

The Salamanders are known to have used Nocturne-Ultima modified boltguns during the Badab War.

The Phobos Pattern Bolter, officially known as the Phobos R/017 Pattern, is closely associated with Mk II ‘Crusade’ Armour and is perhaps the most venerable design of the Bolter used by the Adeptus Astartes. This weapon was .70 caliber as opposed to the .75 round most associated with the Bolter today. Phobos pattern bolters were hand-crafted by the Fabricators of Mars at the very birth of the Imperium, to ensure that every Marine had the finest wargear with which to reunite the scattered elements of Humanity during the Great Crusade.

The Primarch’s Wrath is a relic item which is believed to have come from the personal collection of Roboute Guilliman. Chased in Theldrite moonsilver and inscribed in microscopic lettering with every treatise on tactics that Guilliman ever penned, this weapon’s quality is such that it allows the wielder to sweep away vast swathes of the enemy with a storm of shells.

The Star Phantoms are known to have used Ryza-Ultima variant boltguns during the Badab War.

The Stalker Bolter is a variant of the standard Boltgun. With an elongated barrel and scope, it is used by Space Marines as either a precision battle rifle or sniper weapon.

A Tigris-Exitus Pattern Stalker Bolter of the Raven Guard

The Tigrus Pattern Bolter was first discovered in the depths of Forge World Tigrus and the STC data for it was quickly disseminated throughout the Imperium before the beginning of Horus Heresy. The Tigrus pattern Bolter is a .60 caliber weapon as opposed to the modern .75 standard. Tigrus is now lost, yet the Bolters that bear its name, though no longer produced, continue to see service in the 41st Millennium.

Note: this is also known as the Tigris class

N.B. Due to the ambiguous labeling of the images, it is not possible to say if the weapon shown here is a “Godwyn Ultima” or an “Ultima.”

The Minotaurs are known to have used Ultima bolt weapons during the Badab War – it is unclear if these are Boltguns or Bolt pistols.

The Mk IV Ultra Pattern has a 25-round magazine; standard features include ammo-counter and targeter which links with auto-senses, and palm-print genetic identification.

The Umbra pattern boltgun was first used in the later years of the Great Crusade and was produced in large quantities.

The variant known as Umbra Ferrox was mass-produced by Techmarines to ensure that enough weapons and ammunition were available during the ongoing Horus Heresy. The difference to the “normal” Umbra pattern is the replacement of the original sickle magazine with a higher-capacity box. Also incorporated is a long-range gunsight with additional target reciprocator systems that mesh with the power armor’s auto-senses.

Note: contrary to the statement that the “Umbra-Ferrox variant” is different only in the magazine used, other sources show “Umbra-Ferrox patterns” with sickle magazines.

~Ok, which one’s your favorite. I know you have one.