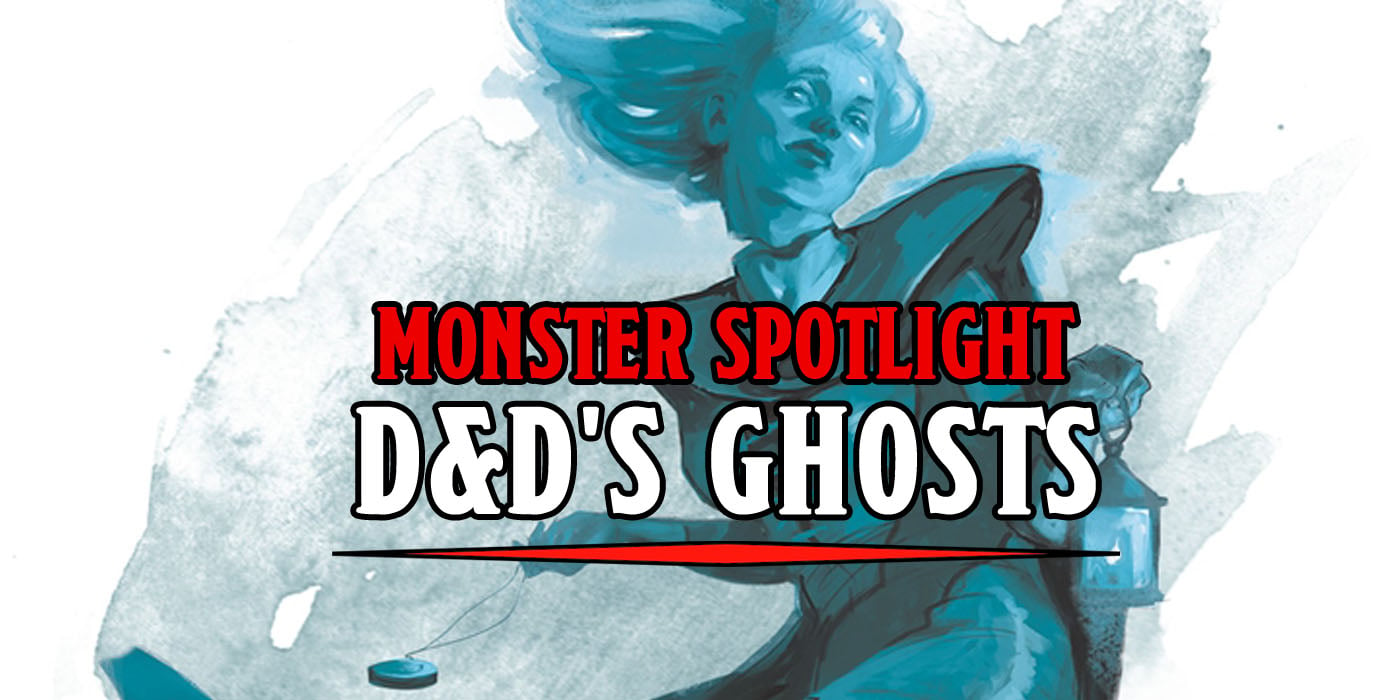 D&D is haunted. Everywhere you look there’s a different kind of spectre or phantasm or wraith. That’s why the Monster Manual is in high spirits.

That’s right, D&D is haunted. What do you expect from a game where one of the core books is called the “Monster Manual?” And all that stuff from the 80’s about satan and steam tunnels and “the real magic?” Yeah that sounds exactly like the sort of thing a bunch of irresponsible teens would get up to at a cabin in a remote, wooded location would get up to right before horribly dying. Whether they’re haunting the halls of Luigi’s Mansion or the pages of the Monster Manual, ghosts are an enduring part of the human psyche. 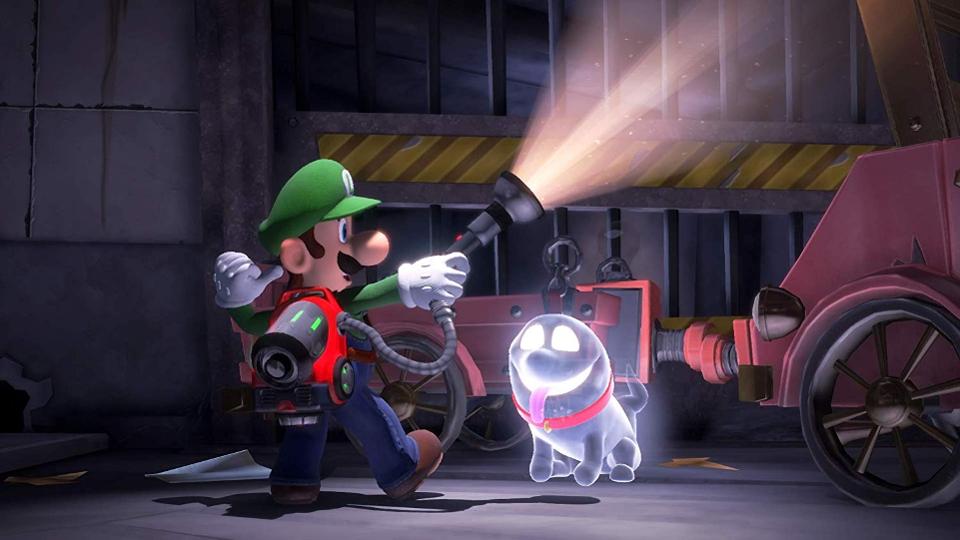 It turns out, they’ve been in D&D since the very beginning. So grab your stick, heat ’em up, and let’s show these spectral monsters how we do it downtown. 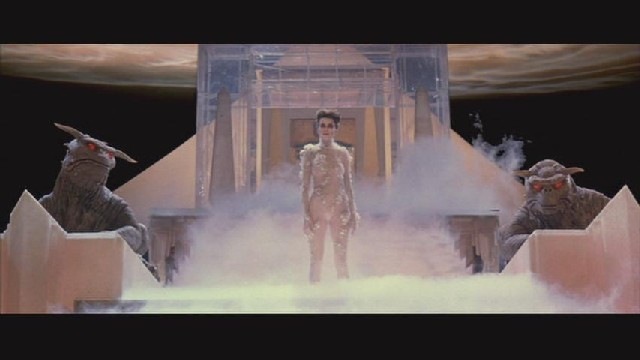 Like many of D&D’s great monsters, these ones come straight out of human mythology. In our world, ghosts are the souls of dead people or animals, and can appear to the living. At least that’s how we’ve come to think of them since the 14th century. Prior to that, ghosts have been interpreted as either a form the dead person would take as they traveled into the netherworld where they would live an afterlife rather like they had in regular life. If relatives of the dead didn’t make offerings, ghosts could cause misfortune and illness, according to Mesopotamian religion.

They’ve also been vapor disappearing into the earth, primarily living in the underworld, only occasionally showing up to provide advice or ominous warnings. Whether working for good or ill, these ghosts were thought to be frightening spirits that lingered near the resting place of their corpses–and in order to be appeased, ceremony and sacrifice and libations, or so the ancient Greeks believed.

Romans, on the other hand thought that ghosts could place a curse on enemies. Murdered souls would haunt places with loud and frightful groans, and reveal themselves as apparitions hanging around their corpses. Even in the Middle Ages, ghosts had their own sort of meaning. Medieval Europe saw ghosts as spirits of the dead returned for some typical purpose (which is where Revenants come from in D&D), and demonic ghosts are there to tempt the living. 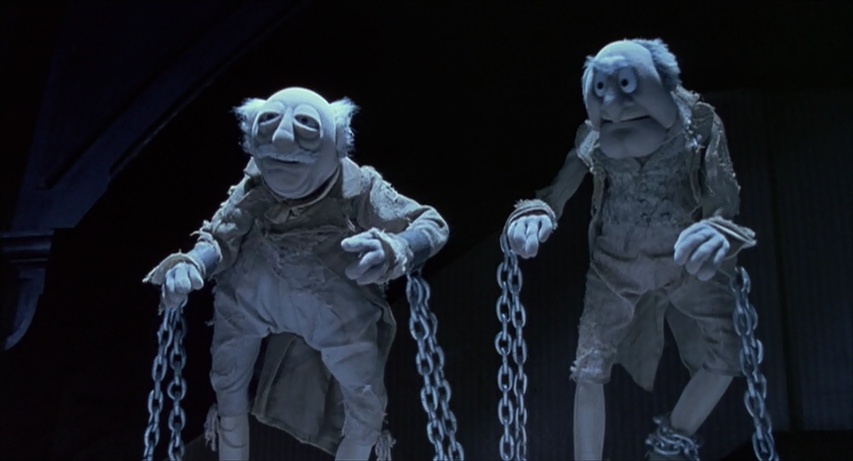 And later we start to get into the modern idea of ghosts, doomed to wander the world or purgatory for a time to atone for their transgressions in life. And I suppose eventually they can teach a rich man that Christmas is pretty cool and maybe he shouldn’t be such a miser. Because even ghosts understand that trickle down economics is a sham. The modern world has since turned to trying to find ghosts with technology, and you can find multiple shows all about that. And that’s not even touching on ghosts in Asia, which is a whole different fascinating take on the stories. But they’re not the inspiration for Ghosts in D&D, so we’ll come back to those later. For now let’s look at how D&D uses them. 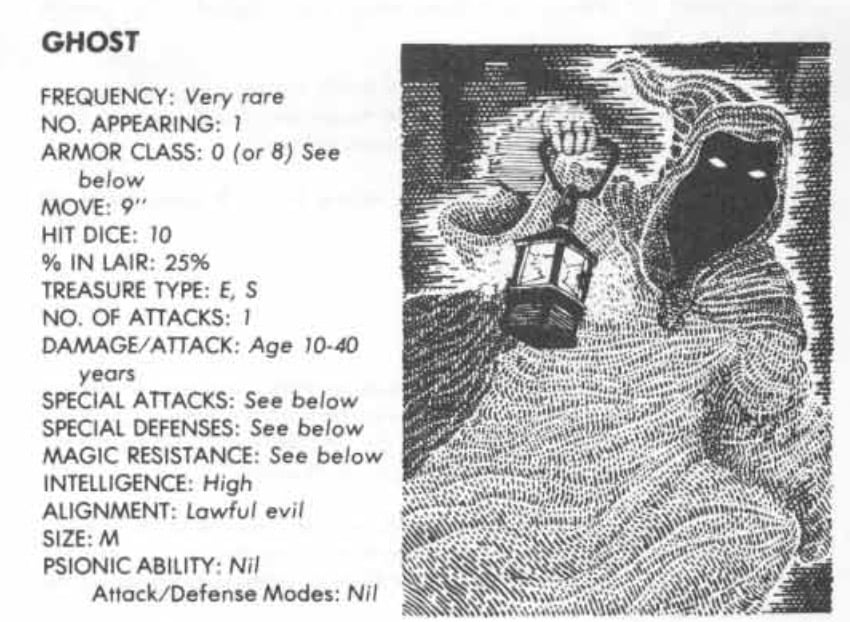 1st Edition ghosts take the ‘evil spirit being punished’ track. Specifically, these ghosts are the spirits of evil humans who were soawful in life that they were given undead status. Whether this is a reward or a punishment depends on your point of view. But 1st Edition ghosts wander the world, drawing life essence from humans, which manifests in two ways. They can possess their victims (in the 1st edition days, they used magic jar) or appearing to their victims and draining away their life. But this was 1st Edition and Gygax wasn’t messing around. Just seeing a ghost would age you 10 years unless you made your saving throw. And if a ghost attacked you, you’d immediately age 1d4x10 years, and this stacks until you drop dead of fright/old age. And if a ghost gets you, you’re dead forever.

That’s 1st Edition for you. Oh, and ghosts can only be harmed by spells if you are ethereal, and can only be hit by silver or magical weapons. So good luck. 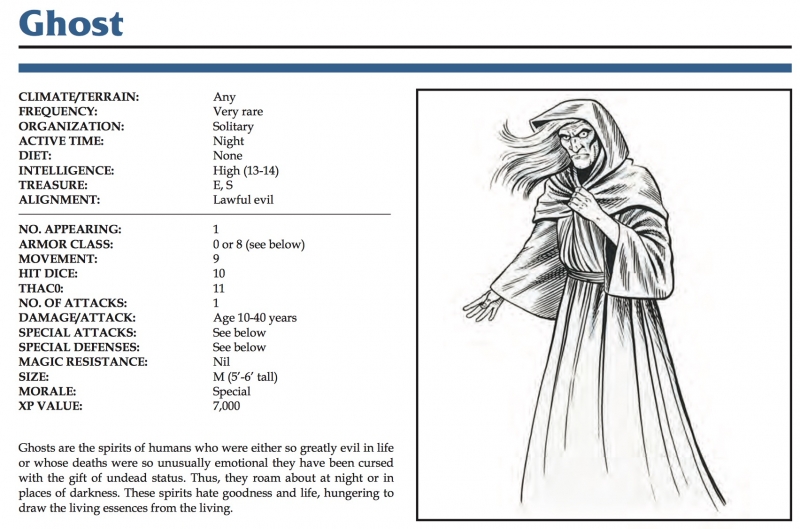 2nd Edition Ghosts look like Emperor Palpatine accidentally bleached his robes and decided to roll with it. But they are much as they were in 1st Edition with a few key differences. Being a high level priest made you immune to a ghost’s power, as did being higher level which gave you a bonus to your saving throw.

You’d also see other types of ghosts creeping in. You could see spirits with a specific purpose in its haunting, like getting revenge on a rival or avenging their own deaths somehow, or people denied proper burials could also be ghosts. Or sometimes a whole bunch of them would haunt the place they died–like a haunted ghost ship that appears in the midst of a lightning storm! 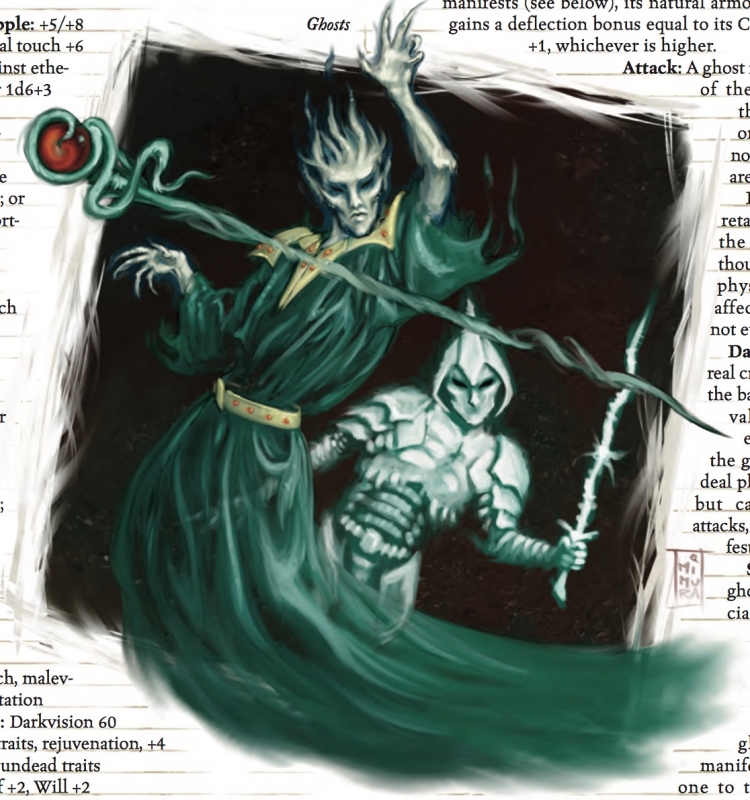 3rd Edition ghosts are a perfect illustration of how complexity is not always better. That’s because Ghosts aren’t an individual monster you can just flip the monster manual open to and run. Sure there’s an example there you wan use…but it’s a jumble of stuff to try and figure out–even in 3.5 Edition. Ghosts are a template now that you have to build a character. Good luck if you’re picking a wizard or a fighter. You need to level them up, then apply the template and change a bunch of things.

It’s a lot of work for a DM, especially for a single encounter. You have to change the type to undead, change their hit dice, and give them fly speeds which are some of the least used rules in the game. Thankfully they have perfect maneuverability so you don’t need to worry about that–but you get a number of special abilities as well. A corrupting gaze that instead of aging your opponents to death deals 2d10 damage and 1d4 points of Charisma damage. This could be threatening until the party levels past the point where they worry too much about saves.

Their touch attacks deal 1d6 damage, but either add their dex modifier to attack rolls if they’re fighting nonethereal opponents, or their str modifier to damage if they’re fighting ethereal ones. And they also have a draining touch, that deals 1d4 points of ability drain, which is different from ability damage. And they can also cause fear, deal ability damage with their appearance, and can also possess targets and use telekinesis.

Which, all of this is great BUT this is for a single encounter. You might also get rejuvenation, in which a destroyed ghost comes back until you figure out why it exists and collect the right kind of plot coupons to get rid of it forever. It’s a very cool concept, but a very clunkily executed one.

4th Edition Ghosts are a breath of fresh air in contrast. They haunt forlorn places, are simply bound to their fate until they are put to rest–again there’s usually a specific story reason for them to exist, so DM’s are encouraged to use them specifically (or as summoned allies). They have much cooler artwork, reminiscent of the Ark of the Covenant style spirits at the end of Raiders of the Lost Ark. And there are a few different types that are easy to use.

There are ghostly warriors who can phase through walls and deal necrotic damage and fight in packs like some kind of ghostly dire wolf. Or there are Trap Haunts, who are a very D&D ghost that try and earn their freedom from eternal torment by luring people into the trap that killed them. These are the possessing targets.

Then there are wailing ghosts who dip into banshee lore, and have a deathly wail and horrific visage that deals psychic damage as a fine how do you do. And finally there’s the tormenting ghost–the most powerful enemy. These ones are like the ghosts of the past. They show up and possess their foes, taking control of their body and using up all your good powers, then escape from the body they’ve been using to deal out massive amounts of area damage. Plus they can create ghostly terrain that immobilizes targets and lets them lock down the battlefield. 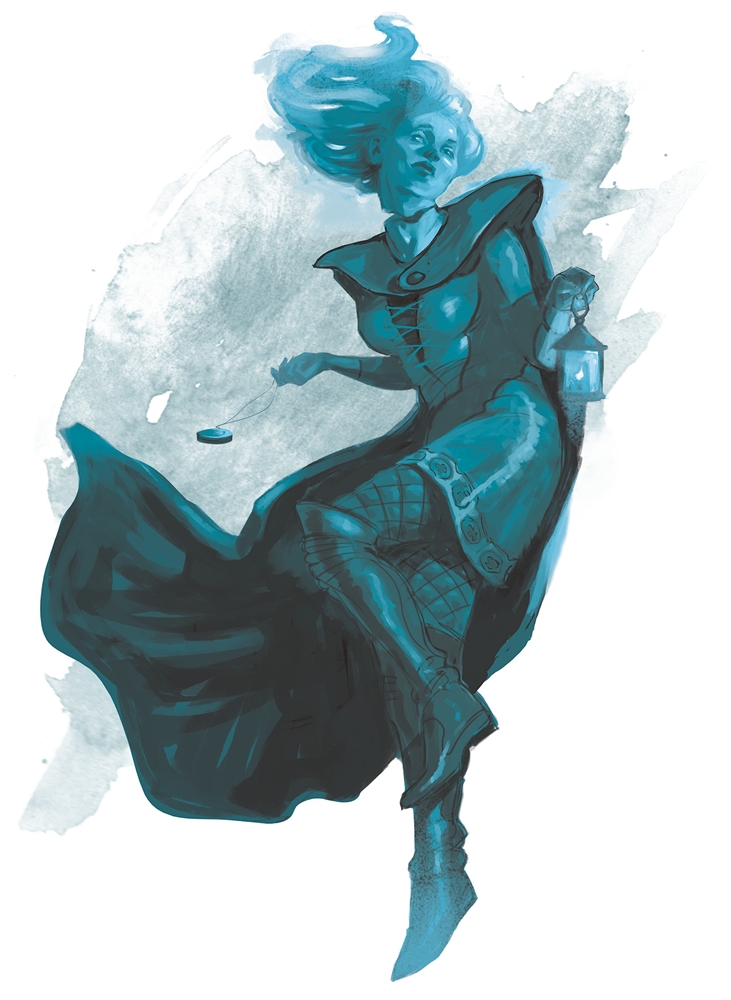 5th Edition ghosts take on the more narrative-heavy feel of the edition. They are all about Unfinished Business, and you get the impression that these are meant to be plot hooks in and of themselves. When adventurers encounter them, or find a ghost haunting a place, they could fight it–or they could try and help it complete it’s unfinished business, which might be fulfilling an oath, communicating something to a loved one–these are a far cry from the “evil spirits cursed to wander the earth” of past editions.

They do hold on to the old “age 1d4x10 years just for looking though” which can be devastating to a character of any level, but especially for someone playing a character with a shorter life-span.

Whatever form of ghost you use, these spooky creatures make for a perfect encounter…as long as you know how to use them.