Pathfinder: Against The Scarlet Triad

Come see how high-level adventures play out in Pathfinder 2nd Edition as the latest adventure path takes players against the Scarlet Triad.

The Age of Ashes might be coming to a close, but before it concludes, things are really heating up as the party of adventurers face off with a deadly organization, the Scarlet Triad. This latest development takes us into some classic Pathfinder territory–Golarion is full of organizations heroic and heinous, and in the adventure at hand, your party will be going up against the Scarlet Triad, who are backed by the city government.

But it’s also a chance to see what high level Pathfinder 2nd Edition combat actually looks like. Watch as some of the higher level humanoid NPCs and their monstrous mounts and allies take up arms against the heroes in an attempt to defend their holdings. 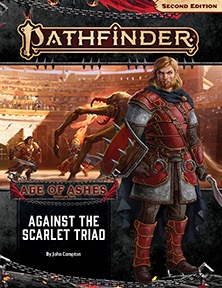 The mysterious fires burning atop an abandoned Hellknight citadel are but the first of many discoveries waiting to be uncovered in this six-part, monthly Pathfinder campaign of continent-spanning conflict against cultists, slavers, and a fiery draconic devastation that could unleash an Age of Ashes upon the world!

The slavers known as the Scarlet Triad have been defeated twice before, and now the time has come for the heroes to confront them in their stronghold in the sprawling city of Katapesh. But the Triad still enjoys the support of the city’s government; before the organization can be destroyed, the PCs will need to undermine the Triad’s reputation, a task requiring guile, force of arms, and luck. The Age of Ashes Adventure Path continues with “Against the Scarlet Triad,” a complete adventure for 15th- to 17th-level characters.

Against the Scarlet Triad is available for pre-order now.