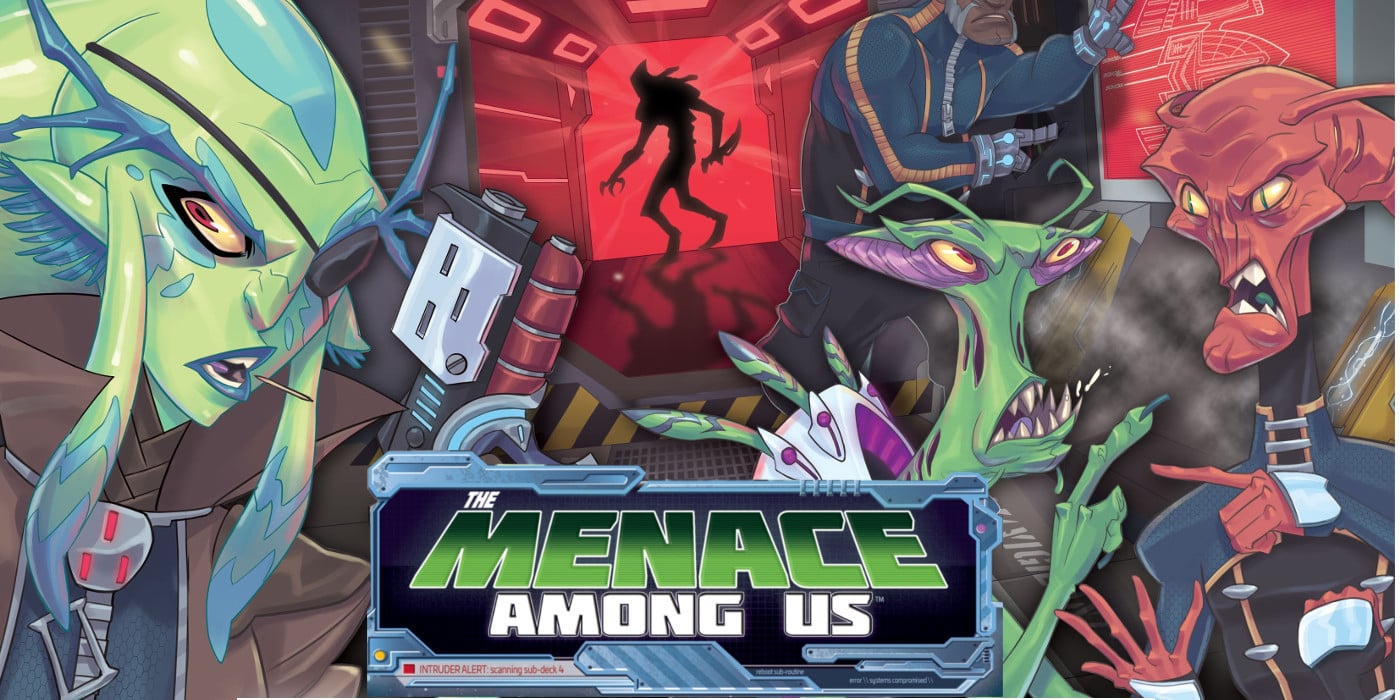 I love hidden role games in general. They are fun and exciting and give so much of how the game plays out to the players. This takes an even higher level if the game also has a traitor mechanic. Some of my best game night stories involve traitor games. I over-analyze every minute action everyone makes that when the traitor is finally revealed, it turns into “I knew it was you because you blinked right after I accused someone else! TOTAL giveaway!” 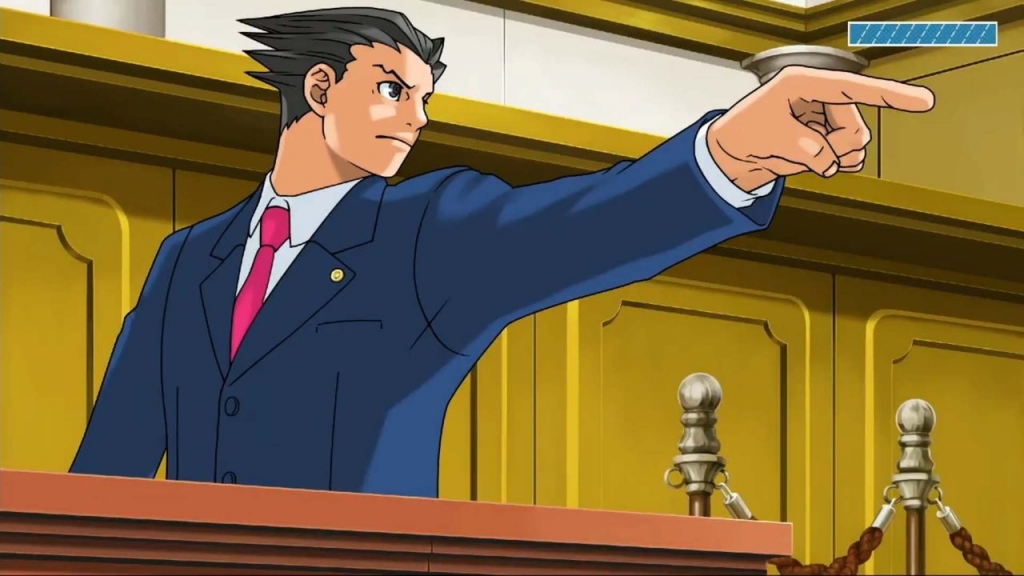 Still, while hidden role games are pretty accessible to anyone, the traitor mechanic turns a lot of people off. I’m okay with being the Seer in a game of Werewolf, but being the the secret agent in Resistance is way different.

Those games require a lot of acting, charisma and quick thinking on the part of the traitor. If you’re into role playing, there are tons of options for you out there. But for the rest, there aren’t as many ways to go about making sure the space ship runs out of oxygen. That’s where The Menace Among Us comes in. 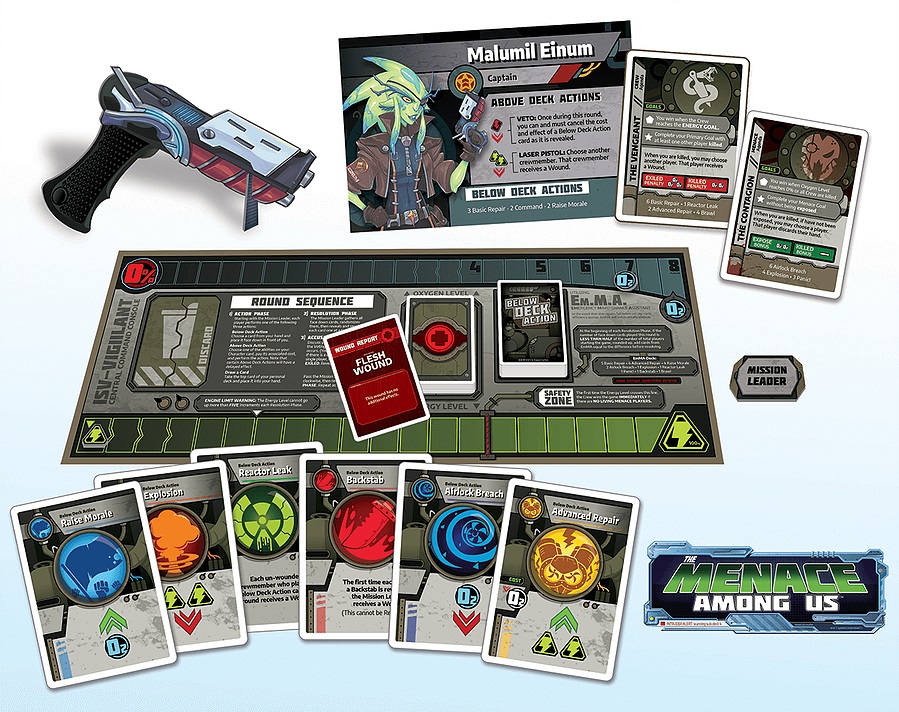 Your space ship crew is left adrift in space, running low on oxygen and power. You gotta get the ship repaired while you can, but someone on board is looking forward to their own inevitable demise, as well as yours. Curt Covert of Smirk and Dagger Games describes it as “Battlestar Galactica in 40 minutes with cards”.

It’s up to the players to bring the engine power up to 100% before the oxygen runs out. On top of that, everyone’s got their own personal agenda and unique character (18 to choose from!). However, even loyalist character might have less than noble agendas. I mean, wouldn’t it be an absolute shame if that one super annoying crew member had an “accident” during all this chaos? Awful shame, that would be. 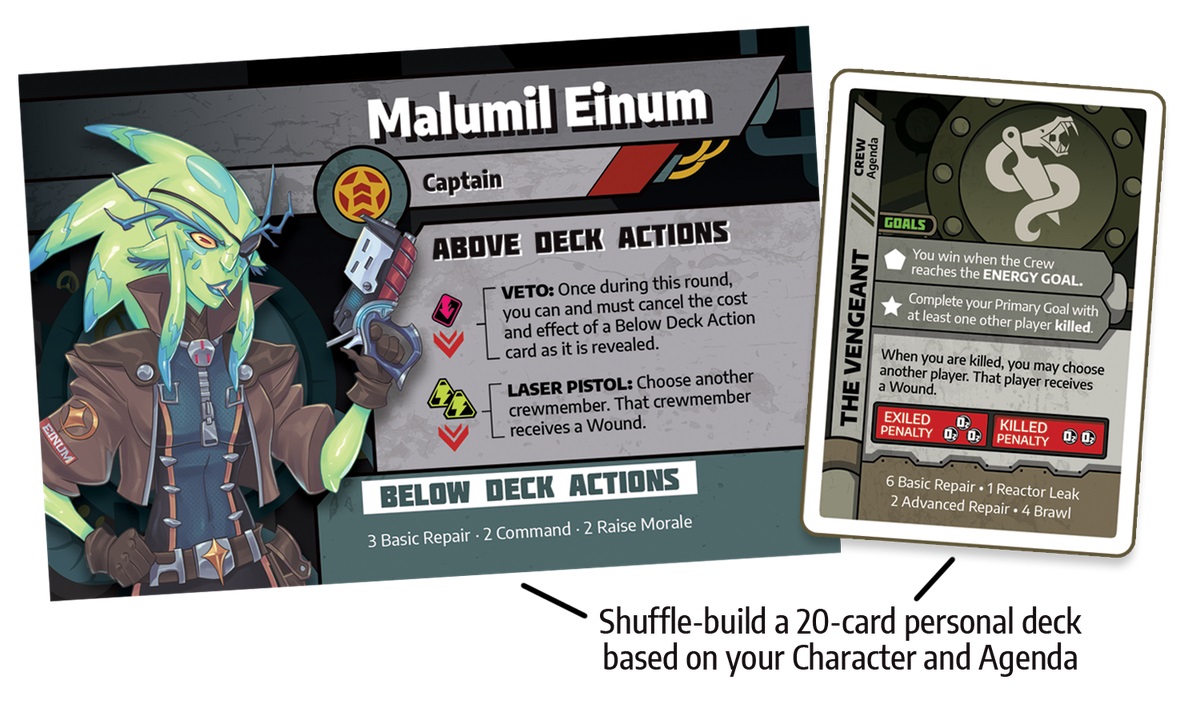 While games like Werewolf, Resistance and Secret Hitler require mostly role playing and convincing others to bring you on the mission, The Menace Among Us plays much more like a typical board game.

Each player has Above Deck actions, which are taken in full view of all players and are often helpful, with a cost. They also have Below Deck cards, where the player places one of these cards facedown in front of them.  During the Resolution phase of the turn, these cards are shuffled together and flipped faceup and can bring both positive and negative effects.

What’s great about The Menace Among Us is that it requires significantly less bluffing than other similar games. And even if the Menace does get found out, that’s not the end of the game. The crew continues on regardless. Because perhaps the Menace did enough damage to make full repair impossible. So while they sit alone in the brig, the rest of the crew fights an impossible fight to keep themselves from running out of air.

Also, accusing someone uses a Voting Pistol. So that’s amazing. 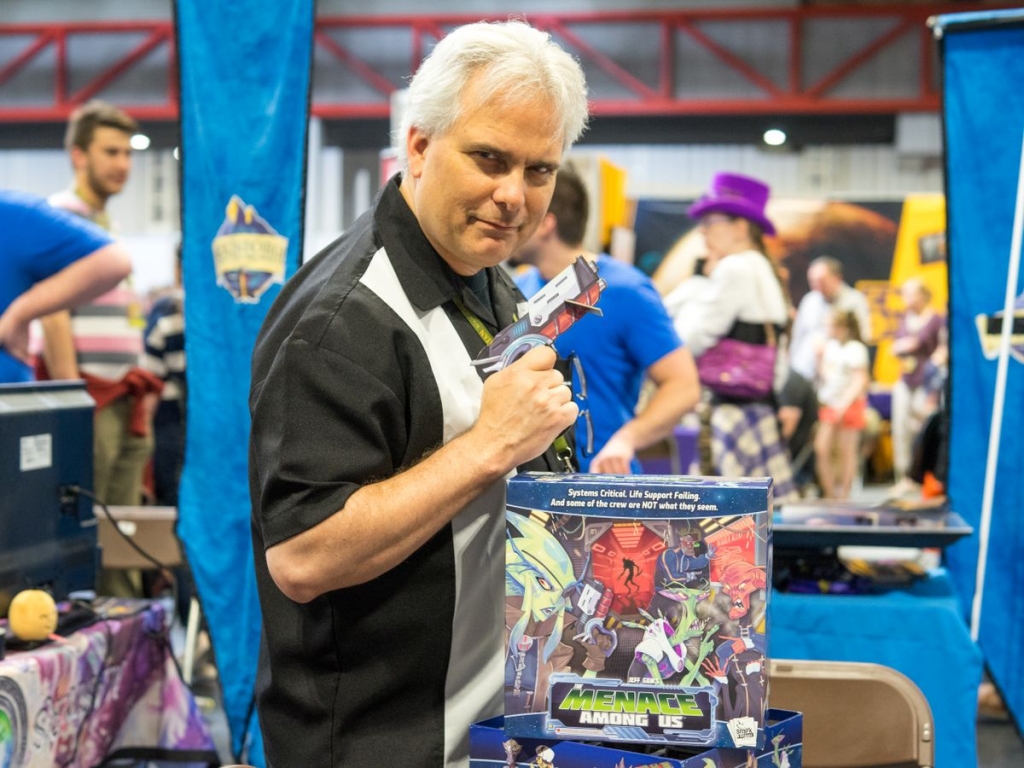 Curt of Smirk and Dagger brandishing the Voting Pistol 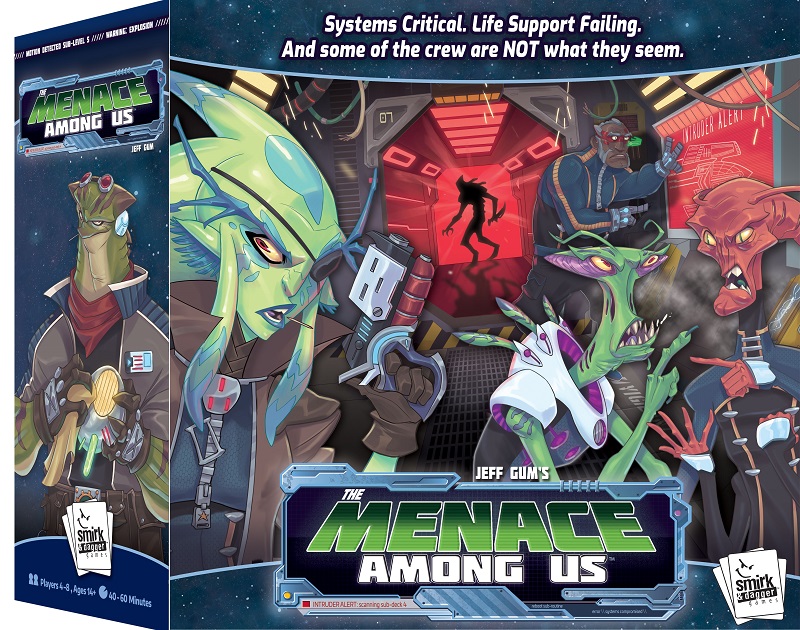 A thrilling semi-cooperative game of intrigue and survival in deep space. Adrift and powerless, your crippled vessel is bleeding oxygen. You must work together to restore power before the air runs out… but hidden among you, masquerading as loyal friends and crewmembers, are imposters who continue to sabotage the ship. Their only goal is to avoid detection and kill the crew, by force or by asphyxiation. Can you identify them in time and eliminate the threat? Or will succumb to The Menace Among Us?