Games Workshop is ramping up to Psychic Awakening Chapter 3 and the Tyranid Flyers look like they are ready for round 2.

Yesterday, Games Workshop put out a video highlighting the Blood Angels vs Tyranids in the upcoming Blood of Baal campaign. It’s a pretty quick video that has Mephiston narrating while a few images splash on the the screen. But the first image is kind of strange. Take a look:

Did you see it? Here’s a screenshot for closer inspection: 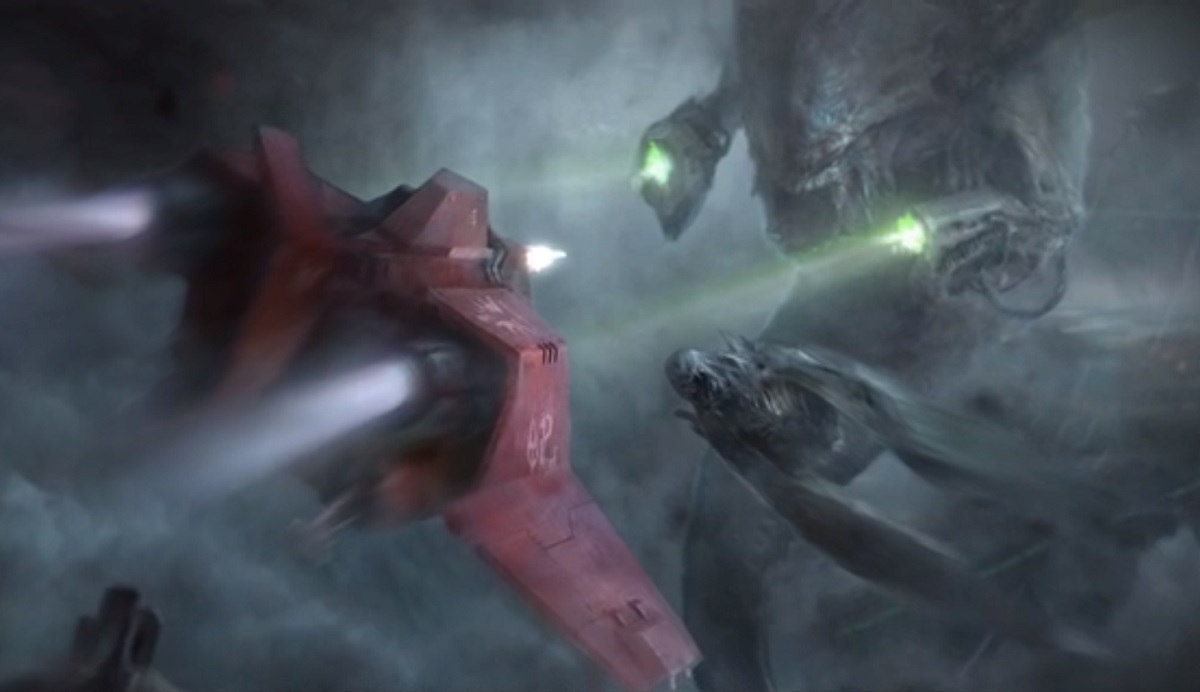 We’ve got a Stormraven Gunship flying towards…a Harpy? But that thing is MASSIVE. Here’s a look at their two models: 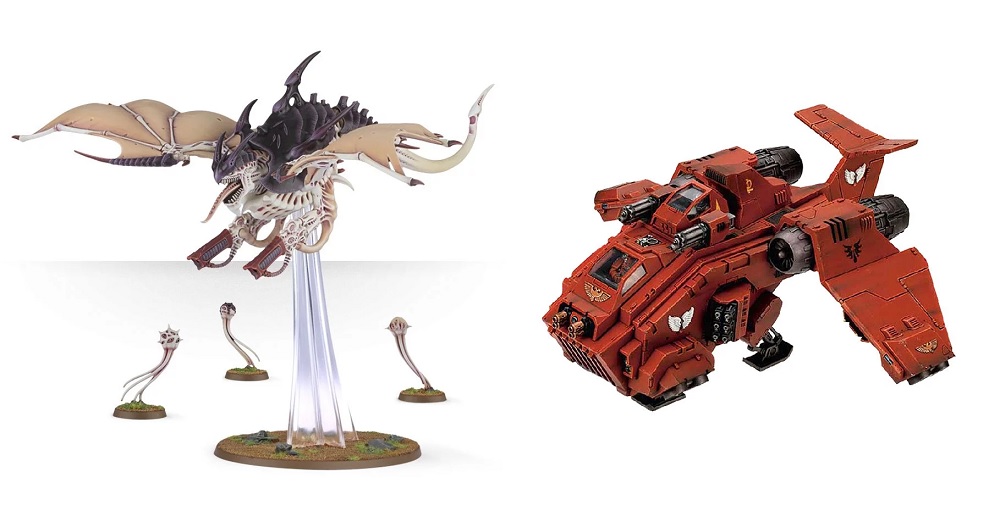 The Stormraven (at least the model) is just as big, if not bigger than the Harpy. Also, where the heck are the WINGS on the “Harpy” in the artwork. Sure the body looks the same, and I’ve heard of artist getting a little creative with the scale, but this is kind of a large oversight. If anything, the smaller flyer to the right of the Stormraven is probably closer to the scale of the Harpy: 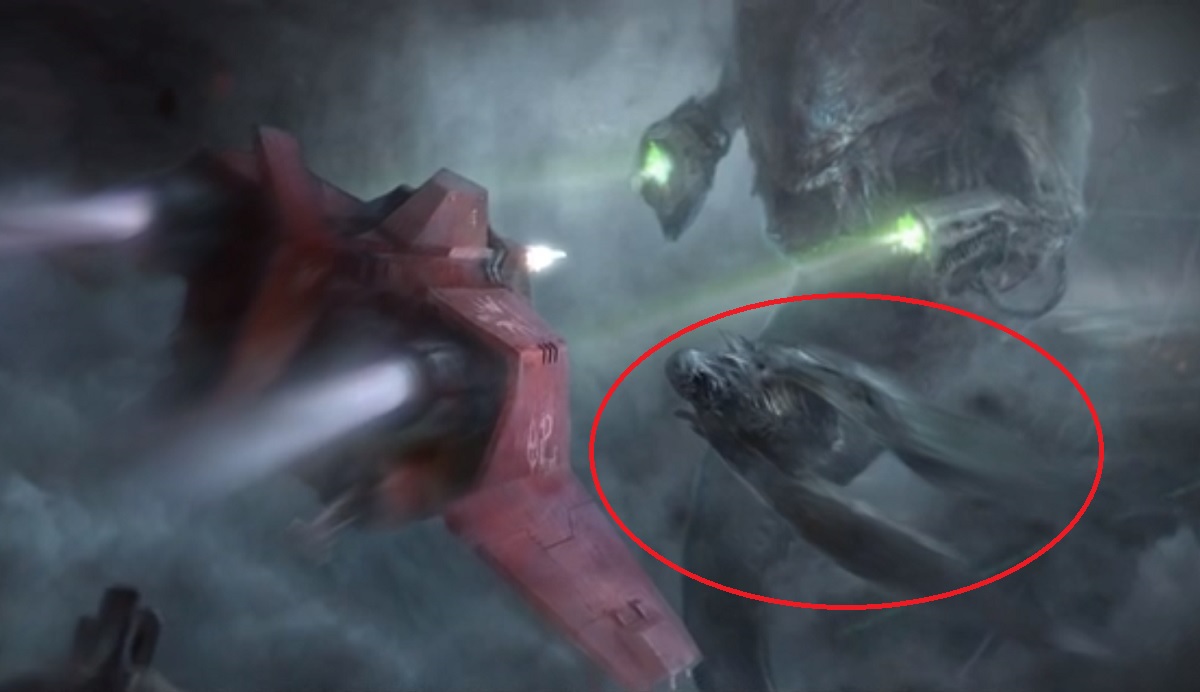 If this was just a one-off thing in the art work, that’s fine. But Games Workshop has shown Harpies and other Flyers in battle with the Blood Angels – and this is newer art:

That’s clearly a Harpy along with Zoanthropes vs Infantry and while the Harpy is large, it’s not THAT much larger than the Infantry below. “Oh don’t the Tyranids have another massive Forge World Flyer? It’s probably that!” That’s a great point. Except it’s not a Harridan either: 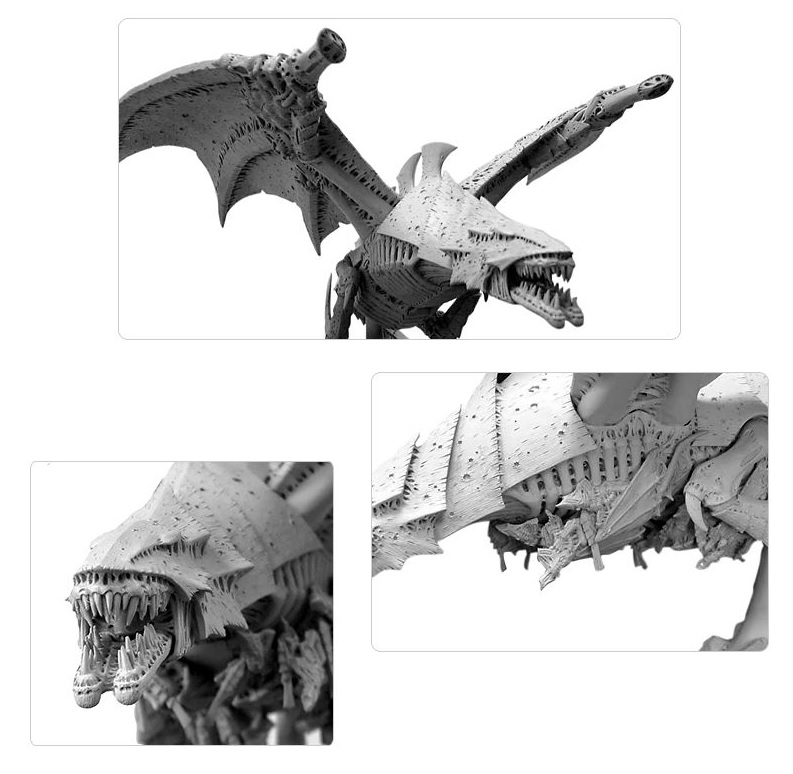 Notice that the “guns” are a part of the wing arms and unlike the picture, we don’t see any wings on this beasty.

So again, what is the BIG flyer from the image above? And if that is a Tyranid Harpy, where are it’s wings? Furthermore, if that IS a Harpy, what is that OTHER flyer next to it, which would ALSO be huge. Is that a Gargoyle then? Because those are even smaller. 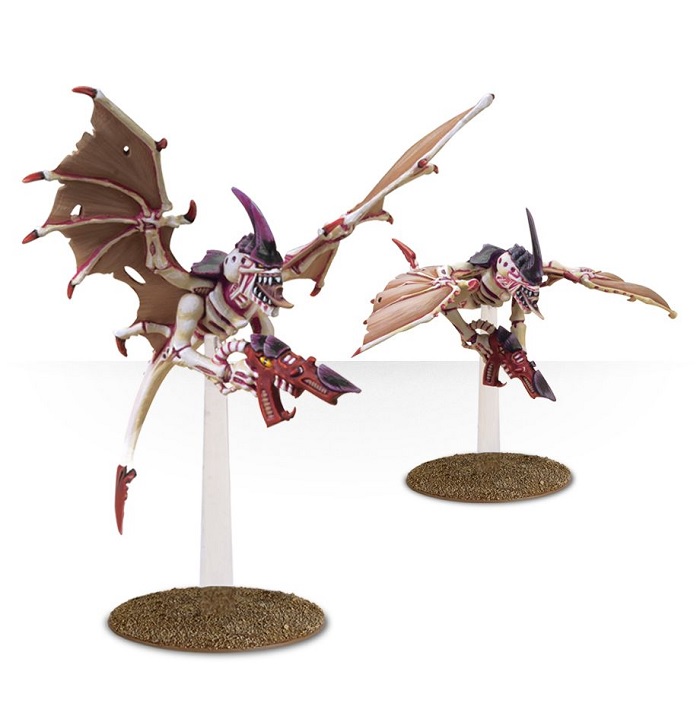 There are TWO flyers from that image that we need to identify. And if one is a Harpy, that still leaves the other one a mystery. And again, I do acknowledge that the Artists sometimes make “interpretations” of the scale of things for the sake of the artwork. But in this case, it’s just kind of odd. Then again, if we look back to the Genestealer Cult Video, that one also has some…interesting scale and creatures teased:

The question stands – what the heck are those two flyers? Are the Tyranids going to get a massive new Flyer or what? And where is my Tyranid Lord of War in plastic, GW!?

What do you think this one is? Just a scale issue or a new “Harpy-Harridan” hybrid?