The Tyranids pushed the Blood Angels to the brink and Baal has paid the price. Loremasters, let’s set the stage for the third chapter of Psychic Awakening.

With Mephiston queuing up for the Primaris Protocol (and getting a new model out of it) there had to be a major event that would have pushed the Lord of Death towards undergoing such a dangerous procedure, right? Turns out there was. Today, we explore the Devastation of Baal.

The Devastation of Baal was part of the Third Tyrannic War, taking place during the devastating period known as the Blackness.

After sacrificing many worlds of the Cryptus System to fend off the earliest advances of the Tyranids, the planet Baal itself was assailed by the xenos. The Tyranid fleet from Hive Fleet Leviathan was of such mass that even after its considerable losses it blotted out the stars from the skies. Commander Dante bolstered the defenses of the Blood Angels homeworld and waited for the storm to fall. Dante nonetheless did use some proactive means of defense, launching preemptive strikes to delay, mislead, and whittle down the Tyranid armada. Hundreds of splinter fleets were defeated in this fashion.

Fortunately for the Blood Angels, they were aided by multiple Successor Chapters such as the Flesh Tearers, Blood Drinkers, Carmine Blades, and the Knights of Blood. Gathering the largest force of Sanguinius‘ bloodline since the Horus Heresy, nearly 30,000 Space Marines were gathered for the battle. These included 12,000 on Baal, 6,000 on Baal Secundus, 5,000 on Baal Primus, and 6,000 in space aboard warships and orbital defense stations.

Yet it was still not enough, and the Tyranids soon launched themselves at Baal itself. The sky above Baal erupted in a firestorm as the vessels of the Space Marines slammed their way into the midst of the approaching Tyranids, launching storms of nuclear-tipped warheads. As impressive as this naval action was, it was hopeless. One by one, Space Marine Battle Barges and Cruisers were isolated and overwhelmed, battered by organic missiles and enveloped by swarms of smaller bio-ships. It was then that the Tyranids began their landings on Baal and its moons. 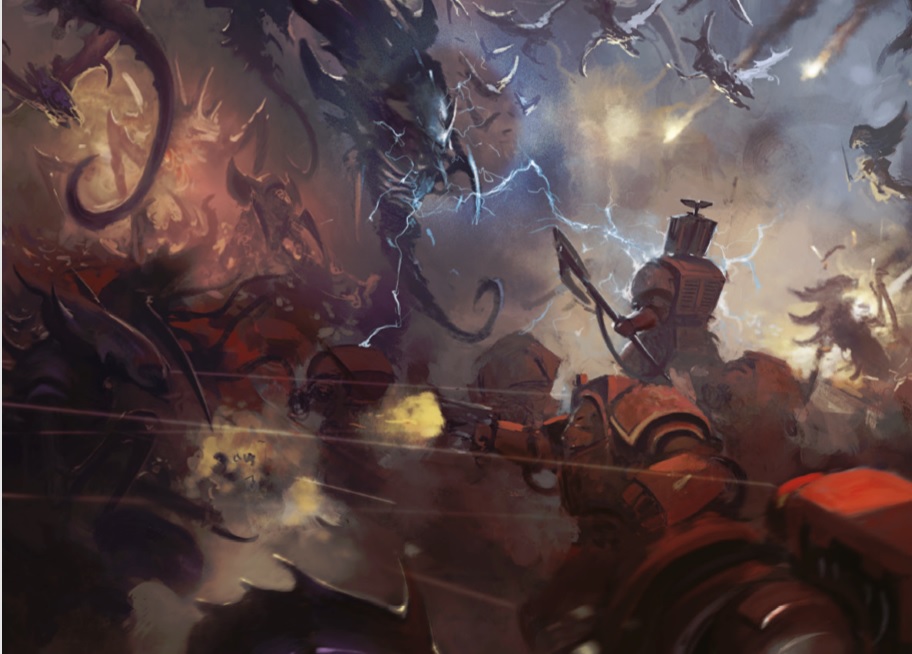 The first nineteen waves, each larger than the last, were driven off at great loss by the Imperial forces, with five Chapter Masters falling in battle. Three of these were in the Battle at the Dome of Angels alone. On Baal Secundus, Gabriel Seth and his Flesh Tearers initially held the Blood Angels Aspirant training facilities while the Carmine Blades held the Astropathic Station. The Space Marines initially held their own thanks to formidable recommissioned Horus Heresy-era fortifications and weaponry, but the presence of the Swarmlord himself turned the tide in favor of the Xenos. 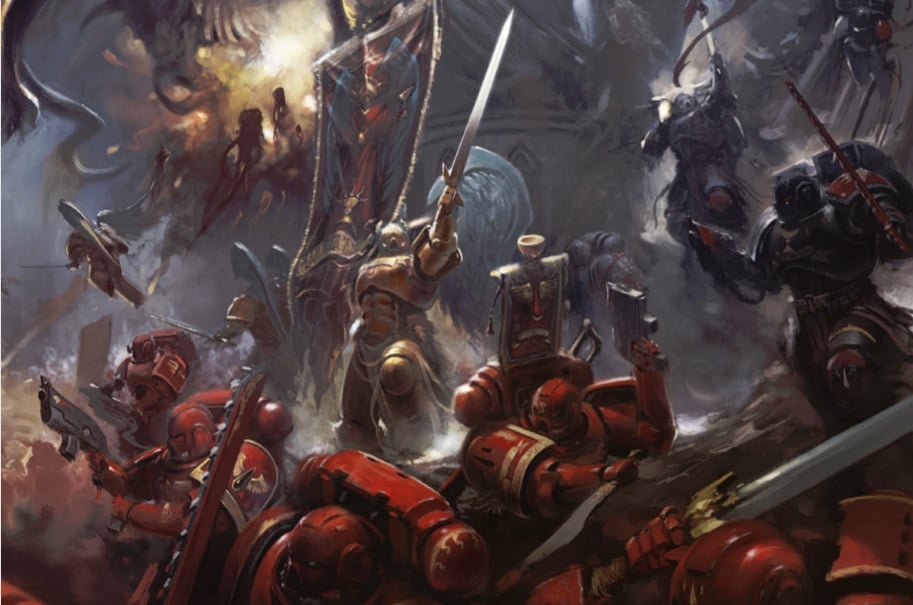 Dante managed to slay the Swarmlord, but was badly wounded in the process. As Baal was overwhelmed, the Tyranids began the process of draining the world and her moons, absorbing even the rad-poisoned desert of Baal Secundus. With the defenses smashed, the defenders retreated to the Blood Angels’ Fortress-Monastery. Baal was ready to fall.

It was then that the Great Rift formed across the greater Galaxy. The Baal System was overcome by the powers of the Warp and Daemons battled the Tyranids.  The Daemons were led by the vicious Bloodthirster Ka’Bandha, arch-foe of the Blood Angels and Sanguinius. Ka’Bandha declared that none would have the right to destroy the Blood Angels but him. The arrival of the Great Rift and Daemons prevented additional Tyranids from arriving, but killed every defender upon Baal Prime. With Baal itself cut off from the greater Imperium, Chapter Masters Dante and Gabriel Seth of the Flesh Tearers, fell back, harried on all sides. Only the sacrifice of the Knights of Blood, an excommunicated Successor Chapter who had nonetheless been accepted as allies by Chapter Master Dante, allowed the survivors to board their vessels and escape, as Baal Prime was overwhelmed by warp-spawned monstrosities. As Seth’s forces retreated, they caught one last glimpse of the Knights of Blood, hurling themselves into the thick of close combat with mindless ferocity, fully enveloped by the madness of the Black Rage.

However, as all seemed lost, the fleet of the Indomitus Crusade arrived, led by the reborn Roboute Guilliman himself. Guilliman and his newly arrived forces fought a great many battles, liberating Baal. Hive Fleet Leviathan was largely destroyed, though it is a mystery as to what exactly happened to it. A clue lies on the now-barren Baal Prime, where the symbol of Ka’Bandha was formed with the skulls of dead Tyranid organisms. As for Baal, most of the planet and its moons lay devastated. Guilliman oversaw a rapid rebuilding process for the Blood Angels and their homeworlds, for they were desperately needed elsewhere.

Want more info on the Blood Angels & Tyranids? Check out the Lexicanum!