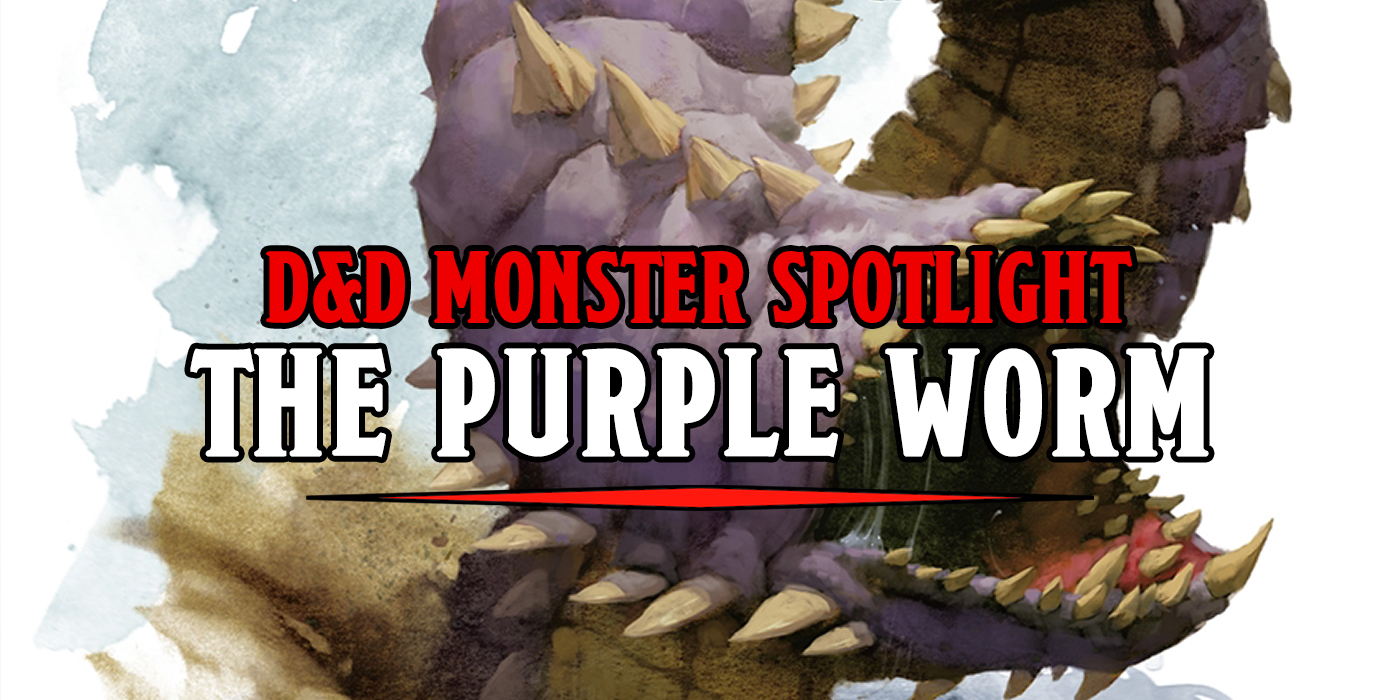 There you are, battling your enemies and minding your own business and then with no warning it erupts out of the solid rock: The Purple Worm!

Purple Worms are basically D&D royalty. They’ve been around forever and they’re one of the creatures to show up in every Monster Manual (as opposed to showing up in secondary monster manuals or being omitted from the entire edition for some reason). They’re simple, terrifying, big purple worms that live underground; the Purple Worm. 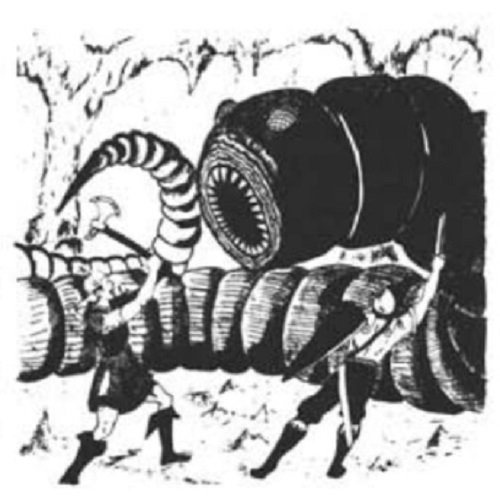 The 1E (and seemingly forever from here on out) main attack of the purple worm was their powerful bite, but when a creature is eight to nine feet in diameter and forty to fifty feet long with a face that’s mostly mouth “bite” seems less honest than “puts your whole self in their mouth and eats you.” Because of this they do have the mechanic of being able to swallow an adventurer, leaving them 12 turns to escape or be saved before the victim is digested and permanently dead. I’m not 100% sure what the rules were regarding turn length back in first edition, but assuming the 6 second standard, purple worms were able to completely digest their food in a minute and twelve seconds, and that’s honestly impressive. 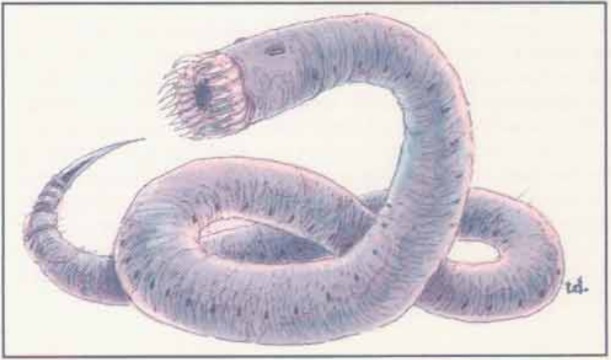 In 2E the purple worm is under the greater umbrella of “Worms” along with the Giant Bloodworm, the Rot Grub, and the Bookworm, which is just a blank page with a mirror. That’s a bad joke, the bookworm is a real subcategory of worm in second edition that we won’t be talking about today. The 2E purple worm’s inner-workings are a little more realistic, now killing a creature it swallows in six turns but taking two hours to digest, making them impossible to raise from the dead. Second edition also introduces the Thunderherder, a desert variant of the purple worm who travels in herds of ten to a hundred eating small creatures in the sand. They’re significantly smaller than your garden variety purple worm at three to five feet in diameter and five to ten feet long, but a herd of  fifty worms with mouths just barely as tall as I am doesn’t sound any more pleasant than one really really big one. 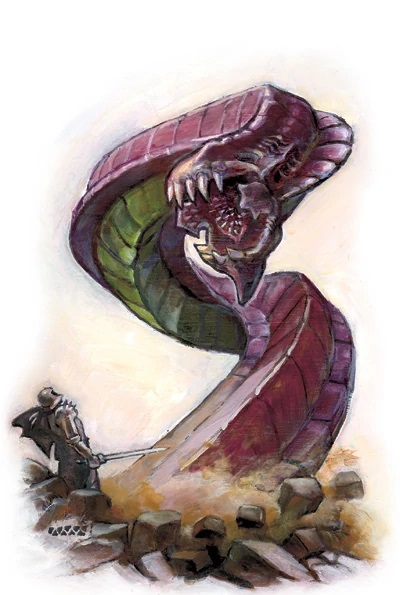 Even without seeing his face, you know that knight is thinking that he’s made a terrible miscalculation.

Third edition brought some noticeable size differences to the purple worm, now five feet in diameter and eighty feet long. Eighty. They use this extra length to coil around itself in a fifteen foot long wormy tube of self defense as it attempts to bite, swallow, and sting anything within reach. I should mention that since first edition the purple worm has had a poisonous stinger, and still does here in 3E, but compared to everything it just felt unexciting. Additionally, they can now sense the location of anything within sixty feet that is in contact with the ground. 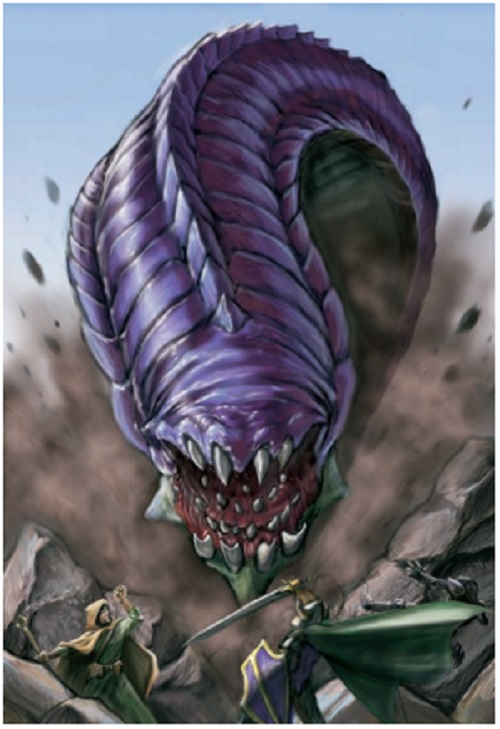 “Did one of you say ice cream?”

I wondered toward the end of my look at 3E purple worms if they couldn’t find you on rock – do Dune rules apply? And the answer seems to be no. Fourth edition tells us that a purple worm can burrow through solid rock, leaving a tunnel in its wake. While they like to travel alone for the most part, they are attracted to the sounds and vibrations of battle and will sometimes explode out of the ground to join in on the fun. Like a subterranean toddler. 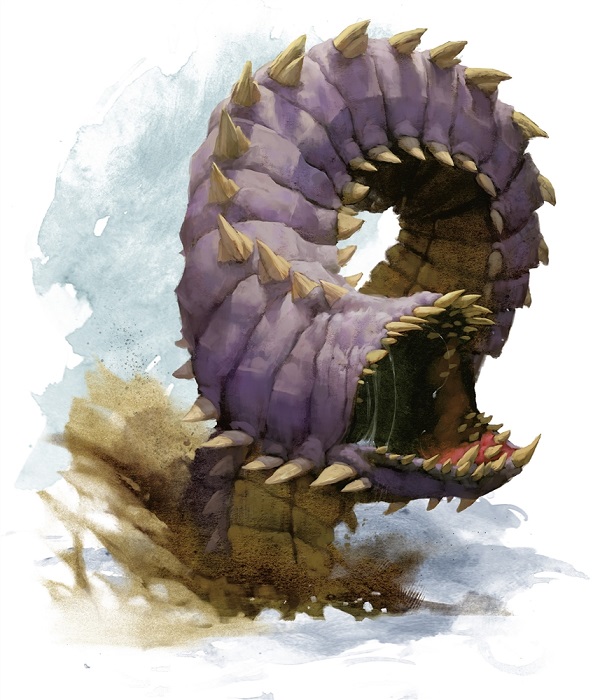 Fifth edition doesn’t add or change much about the purple worm, and frankly they don’t have to. It’s already practically perfect. The Monster Manual does point out that they don’t often return to their own tunnels, making those a great place to avoid them should your party be traveling underground or consist of underground dwelling peoples such as Drow. This feels like wasted real estate to me, but what do I know? I’m not a purple worm.

When’s the last time you encountered a purple worm? Did Dune rules apply? How did you defeat it? Let us know in the comments.