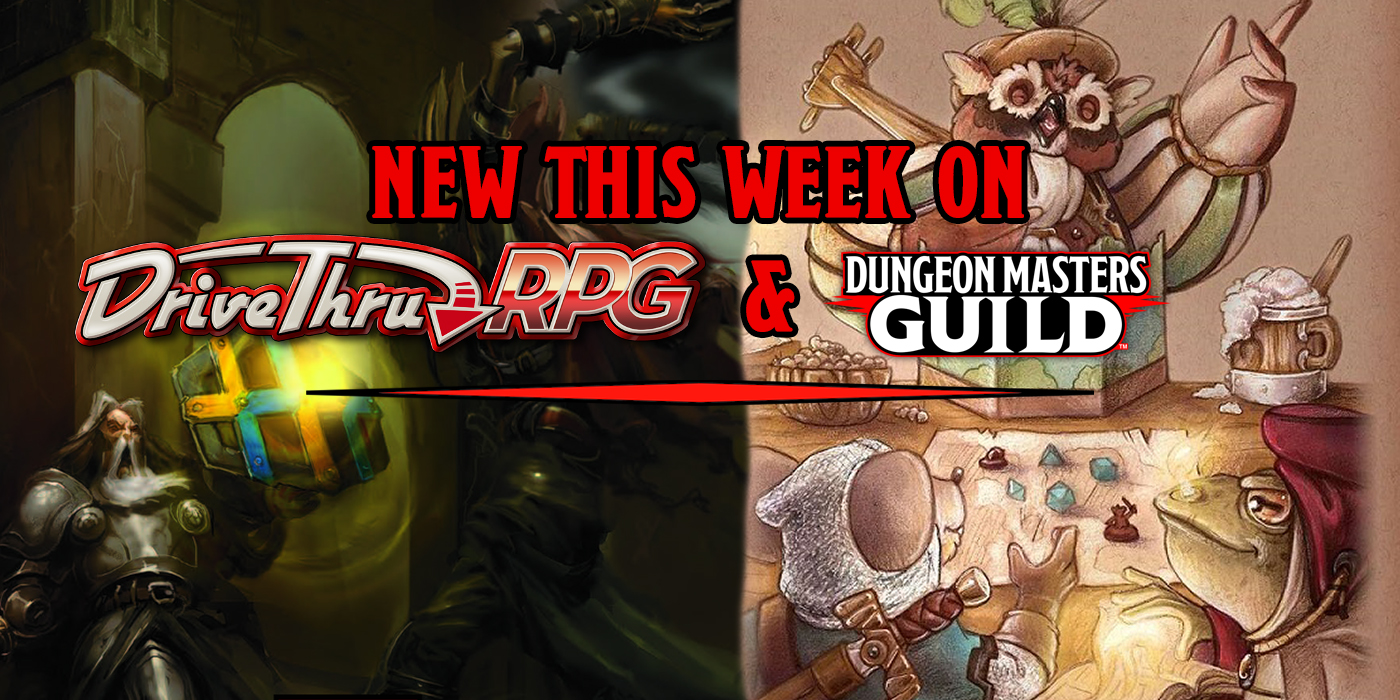 Solve mysterious desperateness on a beach town, jump to a dystopian cyberpunk future, and see the future this week on DriveThru RPG and DM’s Guild.

This week is dystopian, because sometimes art imitates life–sometimes it’s the other way around, but for now, why not head down to a polluted ocean for some more modern day adventures around the New Jersey shore, or if that’s too close to home, visit a post-apocalyptic Jersey Shore (or thereabouts) in Mermaids After The End, Or perhaps you’d rather some cosmic horror to imitate life with? We’ve got you covered and so much more…

Down To A Polluted Ocean 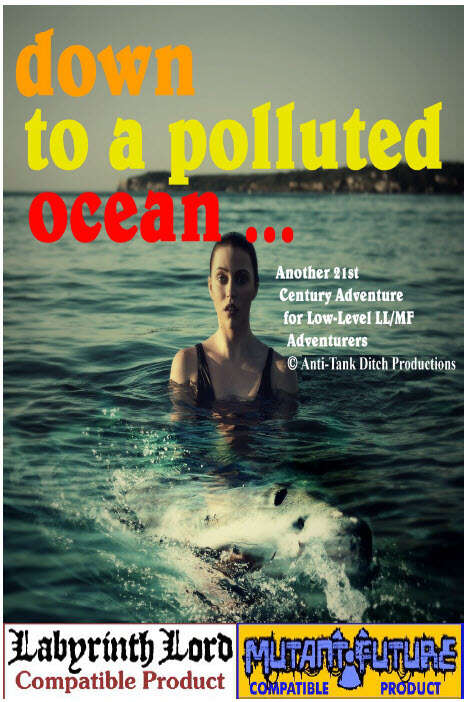 “Down To A Polluted Ocean! Beach-goers are being killed off the New Jersey shoreline. Something is loose. Yet what is it? Does it involve the Gene Factory or the inordinate polluters that surround the Bay? Where are the missing prostitutes going? And what are the mysterious comings and goings around the Docks? What is turning the Green Sea Incarnadine?

This game feels a little like Jaws, a little like Stranger Things and has my undivided attention. Mystery games always have a lot of potential, but the dark and insidious paths Polluted Ocean promises in the teaser description alone has the making of an incredibly interesting and twisty game. Not to mention, if you haven’t spent any time in small Jersey beach towns, they would make a very fun backdrop for a kitchy mystery like this.

Mermaids After The End 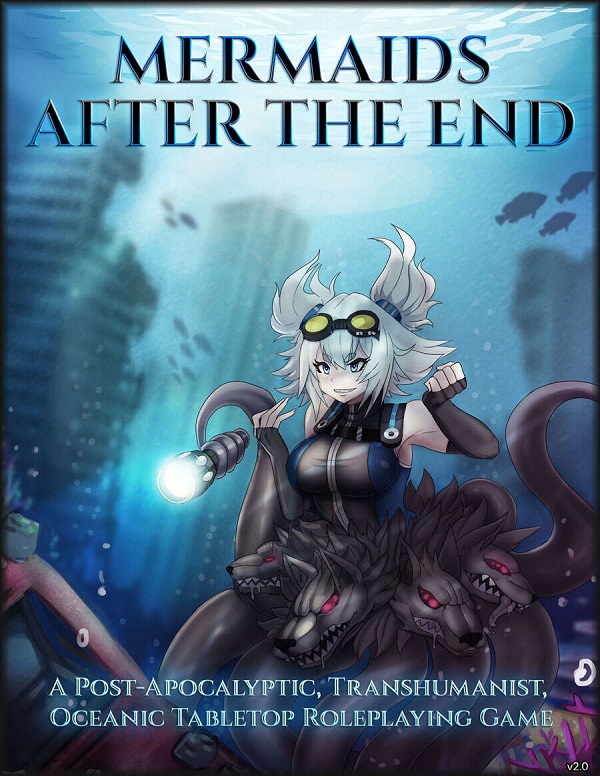 “Mermaids After the End (Shortened to MATE or M8) is a narrative-focused tabletop roleplaying game (TTRPG) meant to guide stories about adventurers called Hunters seeking fortune in the unknown depths of the post-apocalyptic ocean. They are part of a transhumanist setting that contains some elements of (cosmic) horror. This makes MATE unique in several ways, but especially because underwater settings are something usually avoided in classic TTRPGs such as Dungeons & Dragons.

MATE uses an innovative d12-based system that involves both dice pools and target numbers for outcome resolution. It takes cues from (what I consider) good mechanics in a variety of other TTRPGs and combines them in a way that leads to a fun, easy system to both run and play. It is best enjoyed in a group of 3 to 5 Players, and can be used for either one-shot session or persistent campaigns. All you need is a singular d12!

The signs were always there. The warnings, a plenty. Yet nothing could stop it.

Many millennia ago, in an event called The Melting, Humanity’s home, Terra, underwent a massive global warming event. Some claimed it was due to Humanity’s hubris. Others insisted that it was a natural occurrence, a result of a thirteen-million-year cycle. The truth of the matter did not matter in the end. The sea quickly swallowed the land. Humanity (or at least what survived) was forced onto an ever-shrinking shore. Wars over land and resources were commonplace. Mankind was reduced to tribalism as each grouping fought to keep what was theirs. Those that remained called it “The End of Days.”

…and yet, the true end came from an external source. In their squabbling, Humanity missed a massive comet before it was too late. All they could do was watch and lament as the iceball slammed into Terra. The impact and resulting rise in sea level confined the 10 million or so that survived to the land that used to belong to the seven highest mountain peaks. It took many centuries before the survivors realized that the only hope for Humanity was in coming together instead of squabbling over land and resources. A global initiative was formed to this end, entitled the Atargatis Project. It worked towards the goal of re-expanding Mankind’s foothold on Terra. Specifically, in reclaiming the land which now formed the ocean floor. That meant turning technology inward: in enhancing Human intellect and physiology.

At first, progress on the Atargatis Project was limited. It wasn’t until Professor Durham achieved a breakthrough in cybernetics 250 years ago that things truly began to change. It became possible to encase a Human brain within a protective case, which in turn could be fitted to any number of cyborg bodies. These bodies enabled Humanity to begin building settlements beneath the waves and harvesting what natural resources were now in reach.

This worked for over 200 years before Humanity reached the limits of their newfound continental shelves. By then, what it meant to express one’s self had changed drastically. When one need only swap bodies to don a new “self,” prejudices over things like Race, Gender, Ability, and so forth all but vanished. Not entirely, mind you, but enough that such occurrences were the exception and not the norm. What mattered was in how someone could contribute to society, no matter what that function might be.

The face of politics and social strata changed slowly, but surely. Meanwhile, Humanity continued to push its own boundaries. It became possible to store one’s consciousness in digital form, moving between bodies the same way humans of old might slip into a new pair of clothes. So long as they remained connected to Seanet, the successor to the Internet of old, anyways. Dubbed the Detachment, the advent of this technology drastically changed the “Human Condition.”

It’s been 21 years since the Detachment, also referred to as 21d. Mankind has made great strides in reclaiming their world, yet a vast portion of the ocean remains untouched by human hand. All manner of old knowledge and resources lies within the depths, just waiting to be (re)discovered. Those that find such boons often see themselves elevated socially and politically. One could end up living a simple, idealist lifestyle, if they so chose. And indeed, the allure of such is enough to send many a would-be diver into the dark recesses of the deep.

You are one such individual, a Hunter. You’ve found a collection of comrades who are just as eager as you to “strike it rich,” as they once said. Little do you know what truly lies beneath the ocean for you…”

Mermaids is a completely new TTRPG based on a D12 dice pool system and answering the question, “Why do so many RPGs avoid underwater stories when the oceans have such awesome potential?” Taking place in a far future world, this system uses classic mythos and monsters such as merfolk along side sci-fi technology to create a uniquely interesting world where seemingly anything could happen. Go out into the waters and try to strike it rich with your hunter buddies, I’m sure nothing too bad could be hiding beneath waves. 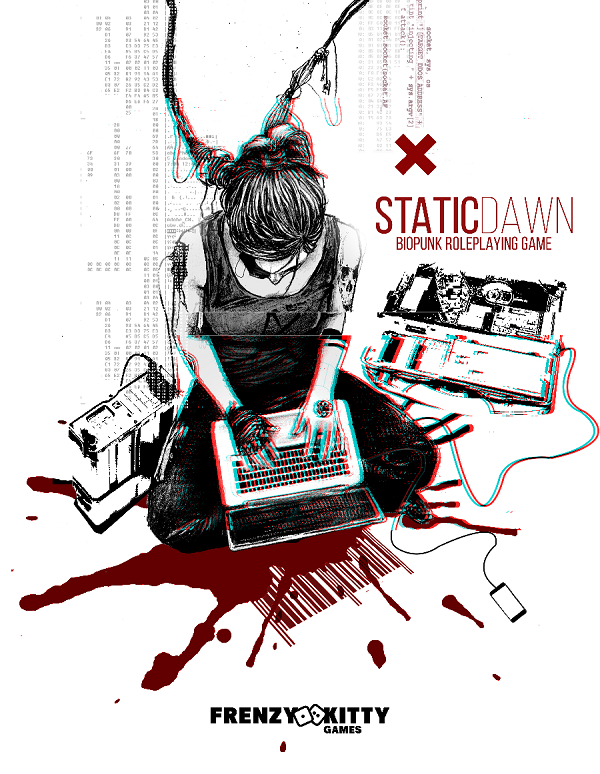 The idea of the “regular human” died a long time ago. In STATIC DAWN practically everyone has augmented themselves in one way or another. The fusion of technology and flesh is a way of life. Without it one is at a definite disadvantage, but augmentations are not all smooth sailing. There is a definite cost to altering one’s biology. How far a character is willing to push that balance, well, that’s all up to you…

STATIC DAWN is an oldschool biopunk role playing game from FRENZY KITTY GAMES (Children of the Fall, KARMA, Something Wicked). It is a game of exploration, adventure, discovery, mystery, violence and technology in a dystopian cyberpunk future.”

If you’re looking for a cyberpunk dystopia that isn’t Shadowrun, pick out your augmentations and jumpt into the world of Static Dawn. I’m judging this book by its cover a little bit, but even with how little they’ve really revealed about the game or system, I am still very interested. The limits of human ability is always an interesting trope to examine, but where is the line between humanity and something else? When have you altered your biology too much? 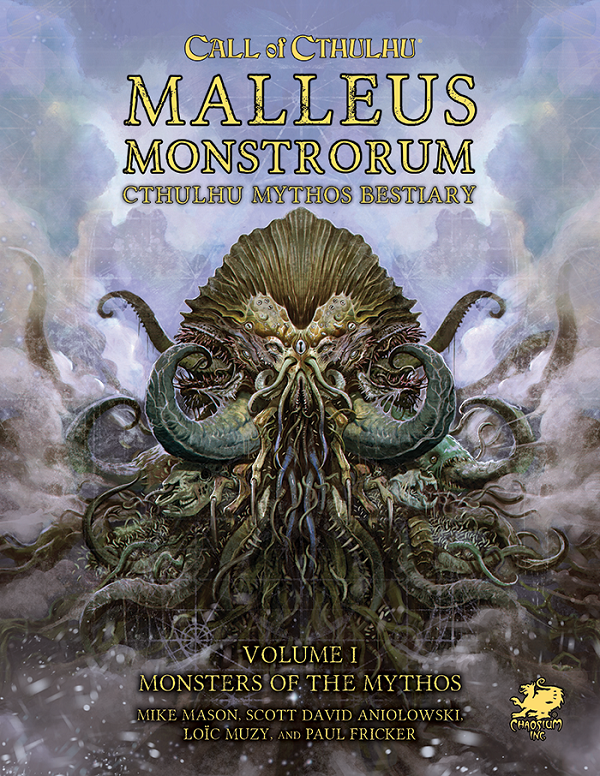 “That is not dead which can eternal lie,
And with strange aeons even death may die…

Here, shall you know the terrors of the void, the nightmare bringers, and the unspeakable lurkers.

Ancient secrets, whispered lore, and collected facts concerning the alien and otherworldly horrors of the Cthulhu Mythos. A cavalcade of monsters and god-like alien intelligences beyond human understanding, all vividly detailed and portrayed. With over 250 entries to inspire countless adventures.

The information within is designed to bring the creatures and bizarre races of the Cthulhu Mythos to life at the gaming table, as well as all manner of Great Old Ones, Outer Gods, Elder Gods, Avatars, and Unique Beings. Their lore and statistics updated and revised for the Call of Cthulhu 7th edition game (and Pulp Cthulhu). All brought to startling life by the illustrations of expert artist Loïc Muzy.

This two-volume collection is packed with ideas, concepts, and insights to immerse your scenarios and campaigns deep in the heart of the Cthulhu Mythos.”

Are there aren’t enough unknowable horrors in the standard Call of Cthulhu books? Do you thrash through the night dreaming of more, horrible beings to consume the world and ruin your players day? Malleus Monstrorum has two volumes full of all of the worst things imaginable to keep your sessions new, interesting, and truly terrifying. 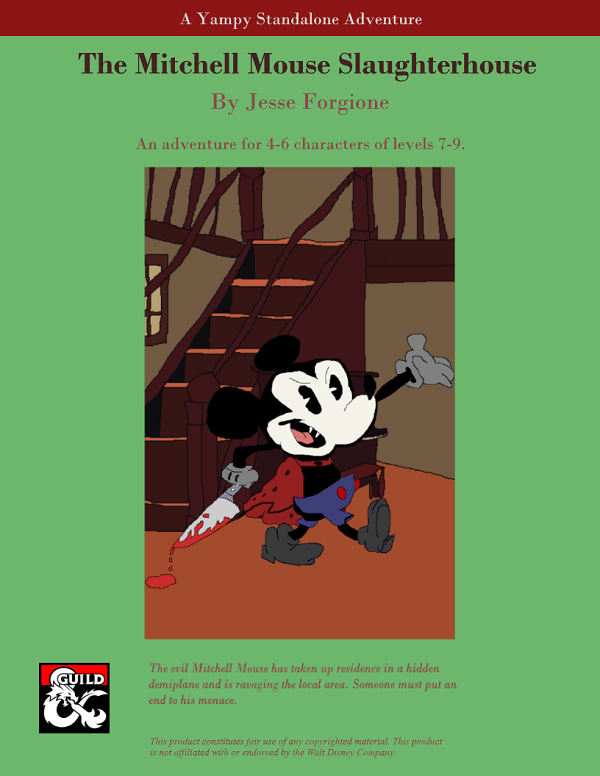 “The evil Mitchell Mouse has taken up residence in a hidden demiplane and is ravaging the local area. Someone needs to put an end to his menace!

A 4-hour adventure for Tier 2 PCs.

This transformative work constitutes a fair use of any copyrighted material, as provided for in section 107 of the US Copyright Law. This product is not endorsed by or affiliated with The Walt Disney Company.”

This one honestly just made me laugh. Stop the menacing Mitchell Mouse from wreaking havoc and terror and save the demiplane he’s chosen to call home. Whether you really love or absolutely hate The Mouse, this promises to be a tongue firmly in cheek game full of in-jokes and over the top cartoonish horror. Pop by the slaughterhouse and see what Mitchell is up to. And please, stop him! 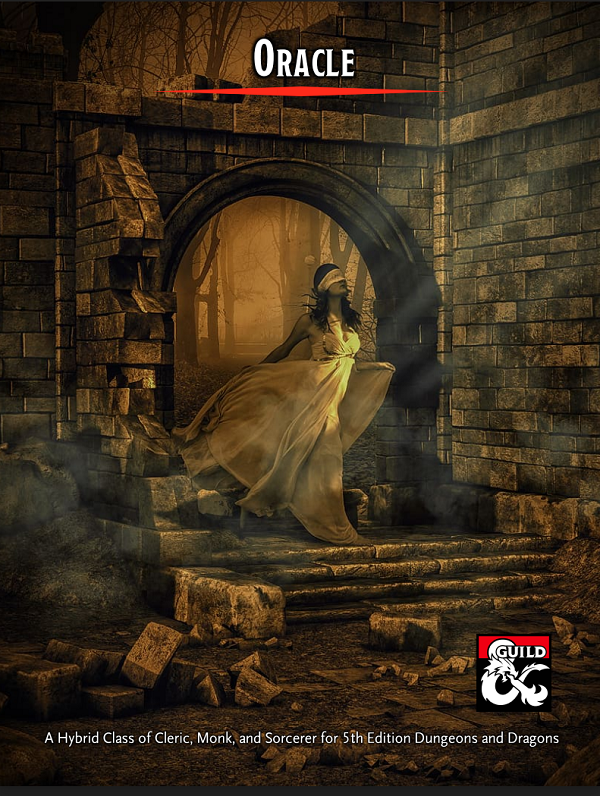 “Oracles are chosen by the gods or the forces of fate. They carry a burdensome curse in exchange for powerful spellcasting.”

With Theros finally available, get into the spirit of the newly available lands with an Oracle. Will you know everything and have nobody believe everything? Will your predictions and knowledge be too convoluted to understand until the time has passed? Or will your patron god go easy on you and give you clear pictures of the future? Yeah, probably not that one.

Adventures in Calimshan: The Starlight Telescope 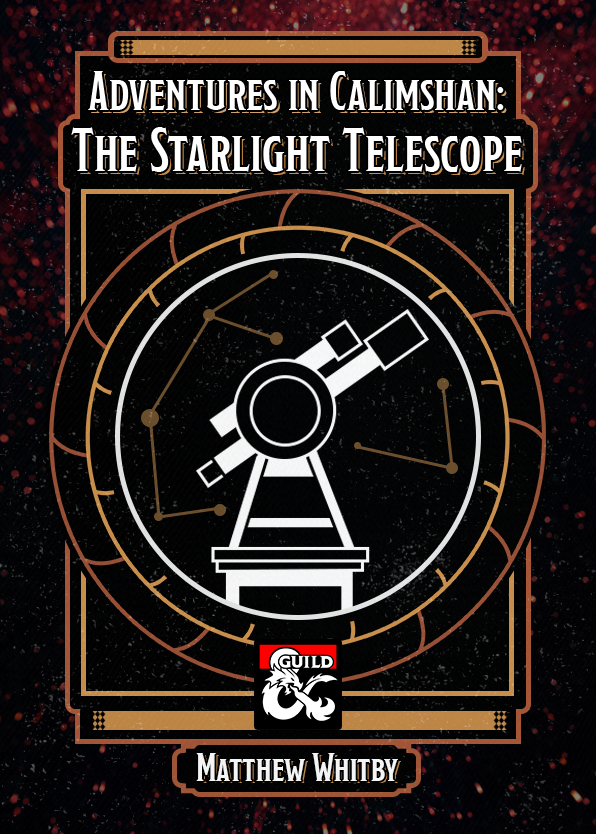 This adventure is designed for characters of 6th or 8th level!

Adventures in Calimshan: The Starlight Telescope provides a two-part 5-8 hour adventure, all set across fantastical locations with countless secrets, adventure seeds, and mysteries to uncover.

Two Adventures in One! Discover the secret of the Tomb of the Astronomer as characters claim the Starlight Telescope, only to defend it from Dusk ’til Dawn from waves of automatrons!

Tests of Might and Mind! Meet Shahin el Esan, a divination wizard, at the peak of their research before confronting Fozar the Djinni within a long-lost observatory.

Explore the Calim Desert! There are 6 unique encounters to explore as the characters venture across the blistering heat of the Calim desert!

If you’re looking for a multi-part adventure that combines mystery, battle, puzzles, and a chance to look through a really big telescope, look no further. Packed with all of the background and game information you’ll need, this supplement is a one stop shop for a DM who needs a break between larger adventures or somebody looking to play a few one-or-two shots before moving on. Cross the Calim Desert and find the lost observatory before it’s lost forever.

What are you playing this week? Did you get anything new? What’s your favorite RPG supplement? Let us know in the comments!