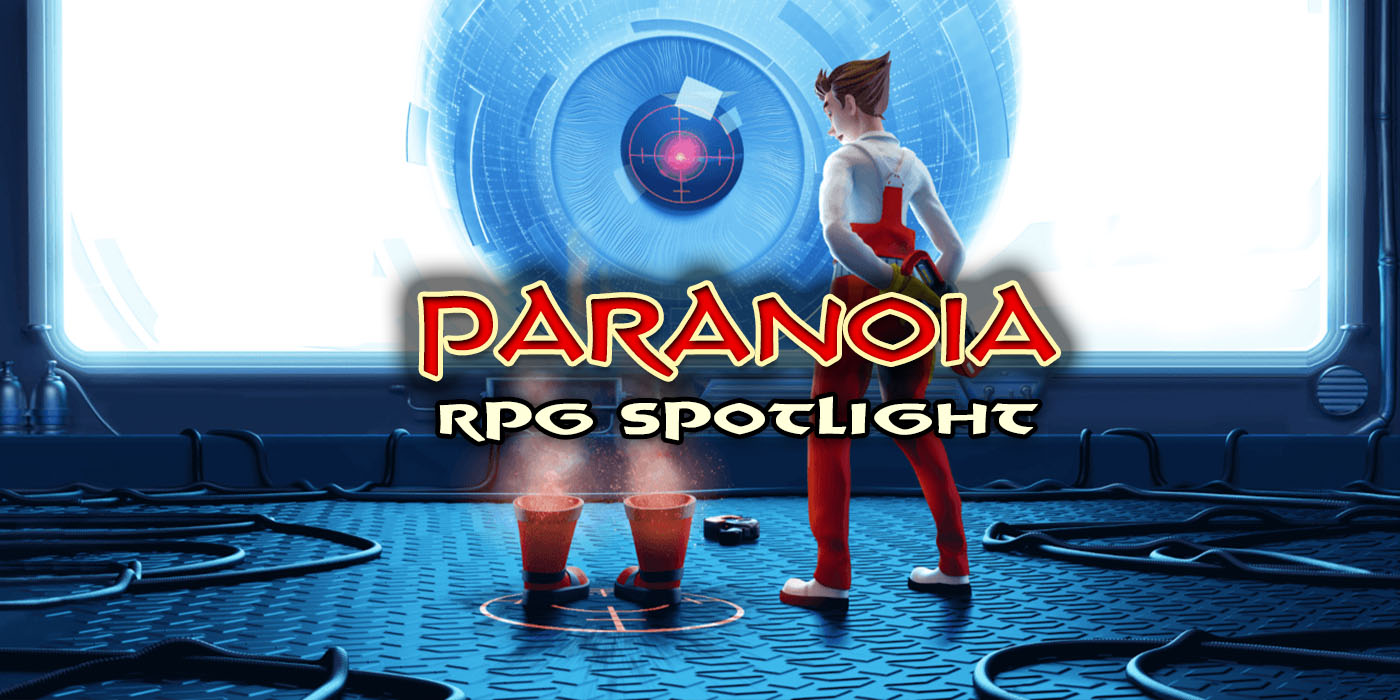 Join us in Alpha Complex where happiness is mandatory, The Computer is your friend, and backstabbing your friends is encouraged.

Paranoia is perhaps the most hilariously unique take on a tabletop roleplaying games I have ever seen. The game was first published in 1984 by West End Games. That year is fitting because this is a game of secrets, conspiracies, misinformation, and lies. And that’s just in character creation. Paranoia is a game that wants you to succeed but also lose, tells you to work together but then encourages in-party backstabbing, and gives you the simplest of missions to complete… which also happen to be entirely impossible. 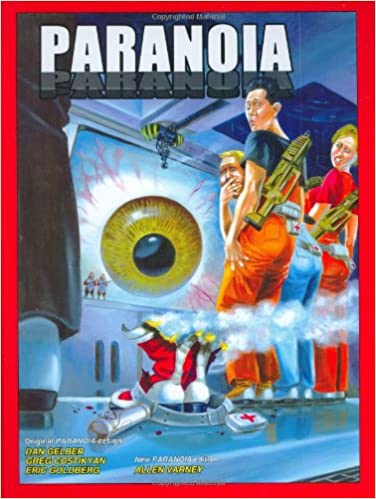 The game takes place in a dystopian future where the city you live in is run by an artificial intelligence known as “The Computer.” For a pretty clear image of who The Computer is as a benevolent overlord, think GLaDOS from Portal. Information about the game, sometimes including the rules to the game itself, is restricted to players based on their level of security clearance and whatever The Computer (or the DM) may find amusing to reveal. Player characters are known as “Troubleshooters” partially because they troubleshoot issues around the base and are sent on missions to complete menial, easy seeming tasks… but mostly the name is a tongue in cheek joke at that their job is to “find trouble and shoot it.”

Did I mention the fact that you’re a mutant, which is treason and cause for your fellow troubleshooters to kill you and force you to pay for a clone replacement body. Paranoia encourages you as a player to continuously guard yourself, and your character sheet, so the other people in your troubleshooting party don’t see a reason to kill you before you find a reason to kill them first. Luckily, everyone gets a certain number of clones so when characters star dying, and they will start dying, your players don’t find themselves quickly ejected from the game.

And all of this is described in such a hilariously nonchalant and conversational tone in the book, that it’s hard not to read it as cartoonishly sily. 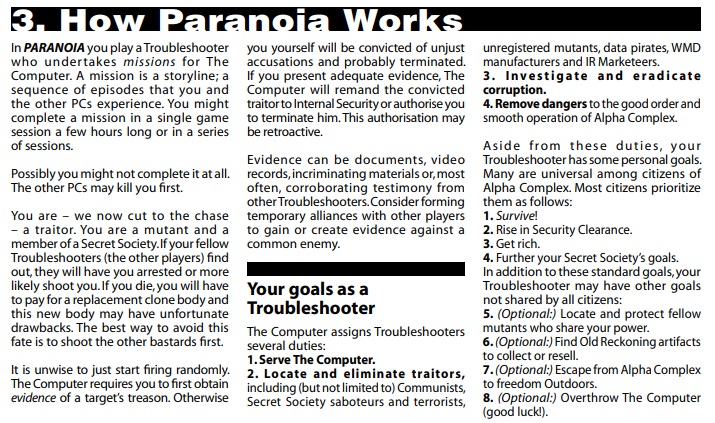 Character creation is something of a free-for-all with multiple ways to figure out your character’s skills depending on your GM’s preference. Random lets you roll a D20 for every skill and divide by 2. The example provided by the book is rolling a 15 for your Management skill divided by 2 and rounded up would give you an 8. Or, you could go with the Custom method, take 40 skill points and allocate them between your skills yourself. 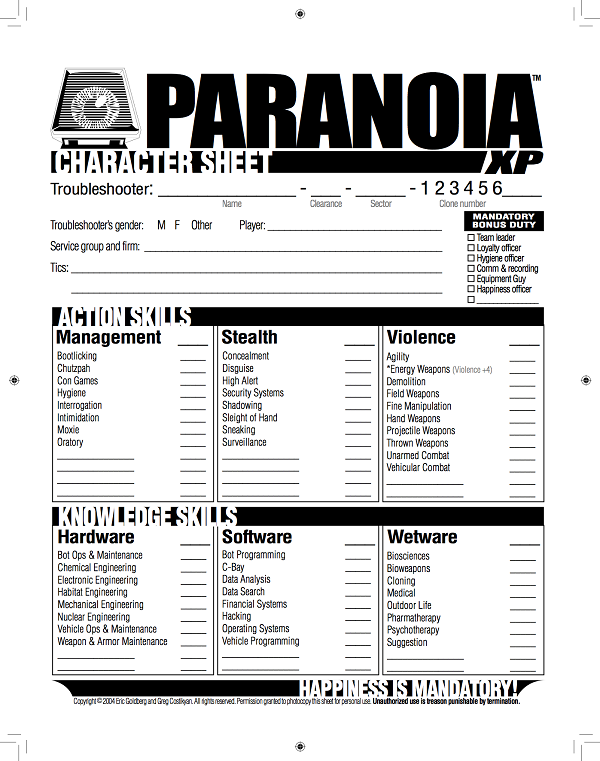 Gameplay is equal parts simple, complex, and absurd. Players roll a D20 and compare to your corresponding skill, in general your want to roll below that number to succeed, but the GM may decide you need to roll above or not tell you. As the game will tell you, it’s not up to you to actually know anything and knowing the rules to the game cam be treason.

All in all, this game is wild and not for the easily frustrated. If you’ll take it personally when your friend’s character shoots yours for no conceivable reason, get mad when the GM is coy with the rules, or have a problem with your dying multiple times in a single session, you may not have fun with Paranoia. But if you’re okay with living in the very bizarre intersection between Ren and Stimpy, 1984, and Portal for a few hours, this may be the exact system for you. And lots of tabletop RPG enthusiasts would agree with you. Paranoia has enjoyed six editions, the most recent being the product of a successful 2017 Kickstarter campaign. 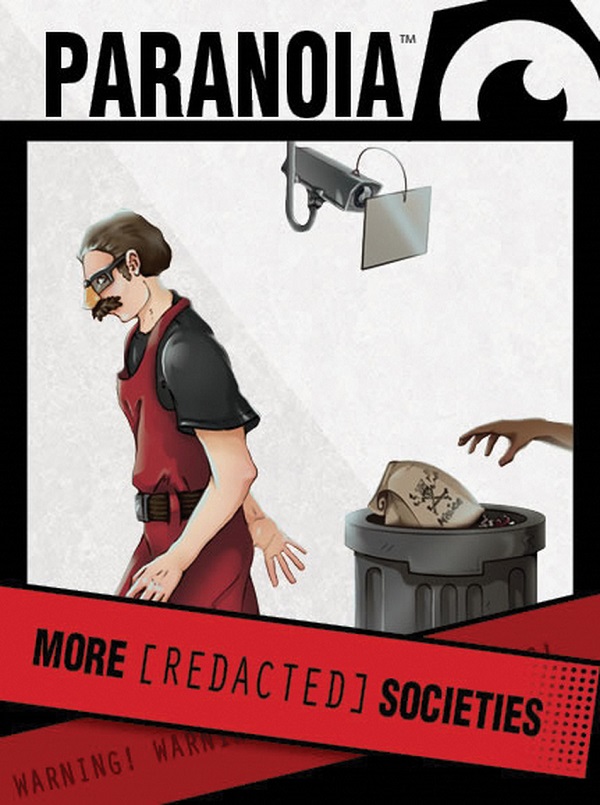 You won’t always want to play a science fiction game that’s built on frustration, but when you do Paranoia will be nigh impossible to beat.

If you’d like to join The Computer and become a Troubleshooter, you can get your own copy of Paranoia at the Mongoose Publishing website.

Have you played Paranoia? How many clones did you go through? Did you learn to trust The Computer? Let us know in the comments!