Today, we speak of the warrior elite of the Eldar Craftworlds – the lightning quick Aspect Warriors.

The real military strength of the Eldar armies derives from their highly specialized Aspect Warriors. These Eldar are walking the Path of the Warrior. Once an Eldar has chosen to tread this path he joins a specific Aspect Shrine. There, Exarchs train them in a specific aspect of warfare.

Each Warrior Aspect represents one, very specific aspect of warfare. As Kaela Mensha Khaine is the god of war, each Aspect embodies a facet of the god. Each shrine was founded millennia ago by a single Phoenix Lord. It is impossible to say how many different Aspects there are. The most common Aspects have shrines on most Craftworlds, while some Aspects are unique to a particular Craftworld – such as the weirdly terrifying Slicing Orbs of Zandros, which are confined to a single shrine on a single craftworld. 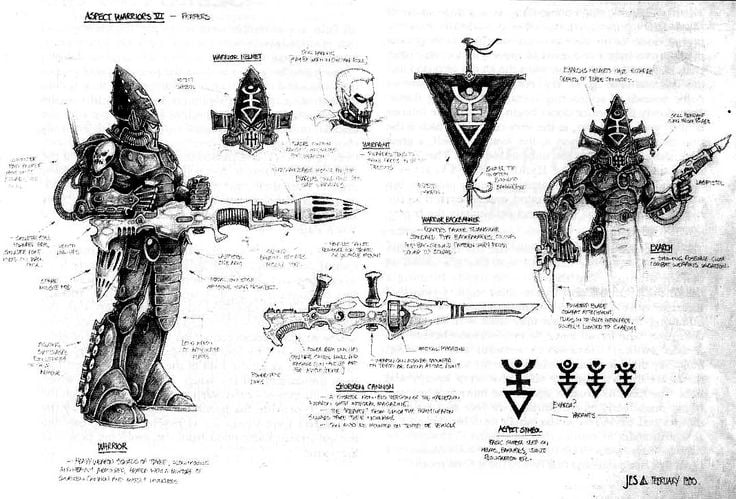 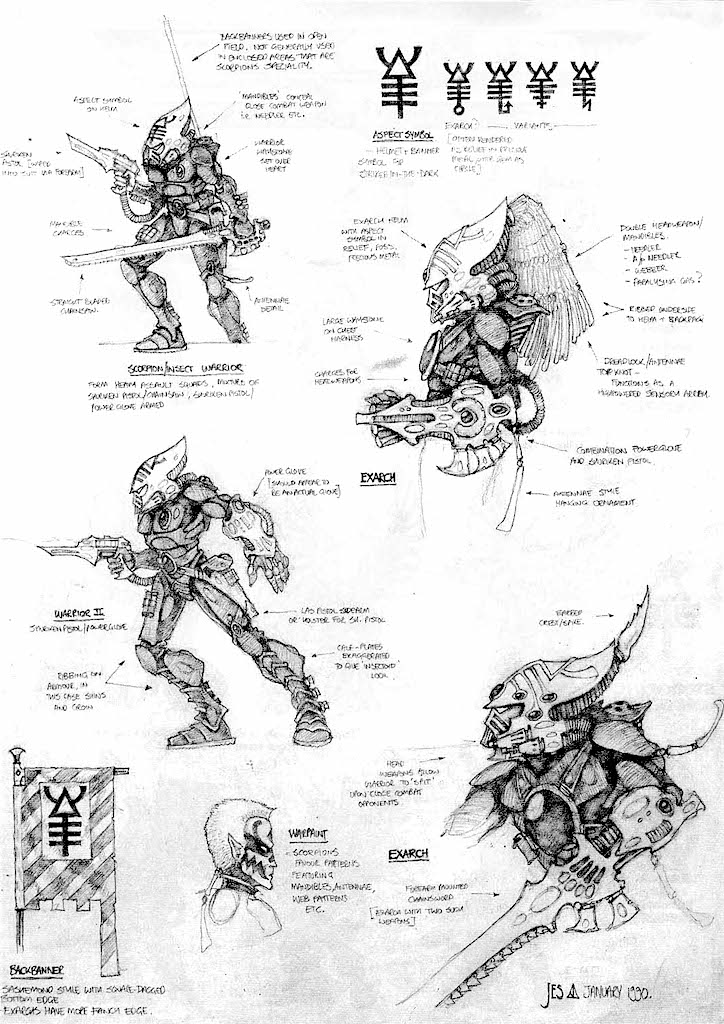 An Exarch is a former aspect warrior who “has lost himself upon the Path of the Warrior” and is unable to ever leave it again. He becomes an Exarch; simultaneously a priest of Khaine, a caretaker of the individual shrine, and trainer, teacher, and instructor of the respective aspect. He is equipped with very ancient weaponry and armour. Each aspect has its own particular kind of Exarchs. On the battlefield an Exarch commands an individual squad of aspect warriors. Exarchs are formidable warriors, and most of them can use their abilities to help the whole squad of aspect warriors under their command.

The Dire Avengers trace their lineage back to Asurmen, the first of the Phoenix Lords and founder of the Aspect Shrines. It is because of Asurmen that the Dire Avengers are the most common of the Aspect Warriors, as he founded more Shrines on more Craftworlds than any other Phoenix Lord. The Dire Avengers’ signature weapon is the Avenger Shuriken Catapult, a modified version of the typical Shuriken Catapult with an extended barrel, power feed and inbuilt rangefinder. To wield a shuriken is considered an art form by Dire Avengers, who use the deadly weapons in battle to create impenetrable storms of monomolecular blades which slice their enemies to ribbons. Even when a Dire Avenger has removed their armour and left their shrine, they will keep these razor-sharp discs hidden under their clothing, never truly unarmed.

the Howling Banshees are perhaps the most feared of all of the Aspect Warriors. When Asurmen raised the first Aspect Warriors, he selected Jain Zar for her ferocity and speed, whereupon she became the first of the Phoenix Lords.

Unique to the Howling Banshees is the fact that they are almost always female, for the banshee of legend is itself a female spirit. Fast and athletic, Howling Banshee training emphasizes swiftness of foot and mobility in hand-to-hand combat. Their Aspect Armour is coloured bone-white contrasted with a flaming shock of orange hair, while their principle armament of Shuriken Pistol and Power Weapon is a devastating combination in close combat. Their most notable weapon though is the Banshee Mask, a powerful sonic weapon which uses a psychosonic amplifier to turn their battle cry into a howling shriek of psychic rage which attacks their enemies’ central nervous system. An entire squad of Howling Banshees activating their masks all at once can cripple an entire enemy unit before a single blow is landed, leaving them paralyzed and helpless before their onslaught.

The Dark Reapers are descended from Maugan Ra, the Harvester of Souls, a mighty Phoenix Lord and the founder of their Shrines. It was from him that the Dark Reapers learned that even the mightiest of weapons can be wielded with the precision of a scalpel, and so they take pride in the accuracy with which they use their signature weapon, the Reaper Launcher. Spitting forth a hail of armour-piercing missiles capable of taking down even the best-protected foes, these weapons allow the Dark Reapers to exert total control over the battlefield and destroy targets at will.

Their unerring accuracy is assisted by their Aspect Armour, a skull-masked costume the colour of midnight. These symbols of destruction include a complex set of interlocking plates which provides better protection compared to other Aspect Armour sets. To absorb the recoil of firing the Launcher and maintain a steady firing position, the powered limb supports include lower leg armour and boots fitted with stabilisers and clamps to secure the Dark Reaper to the ground. Their helmet incorporates specialised rangefinding equipment, part of which extends out of the helmet in the form of sensor vanes, which allows them to achieve target lock on even fast-moving vehicles. This also creates a mind-link with the Dark Reaper’s weapon, allowing them to “see” out of the muzzle of the launcher. The resulting increase in their already deadly accuracy means it is almost impossible for a Dark Reaper to miss his target. 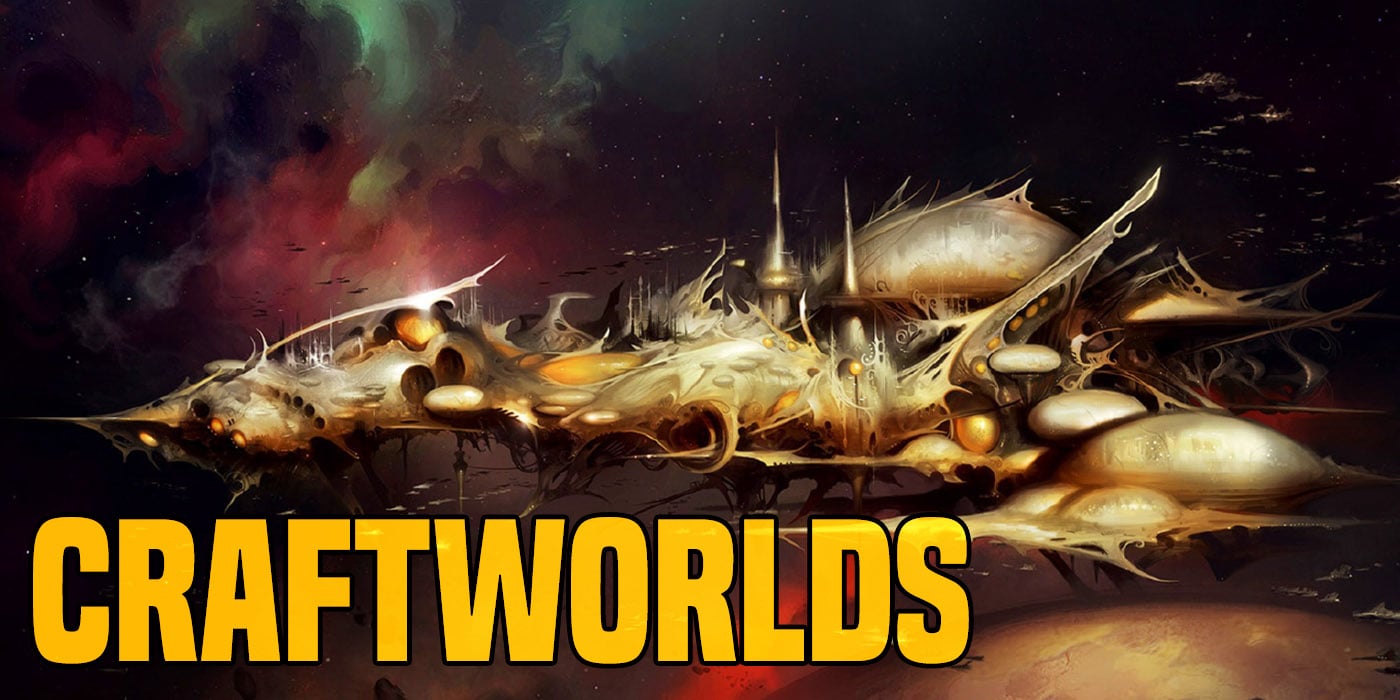 ~Let us hope one day the missing Phoenix Lords return to their kin – and the tabletop.