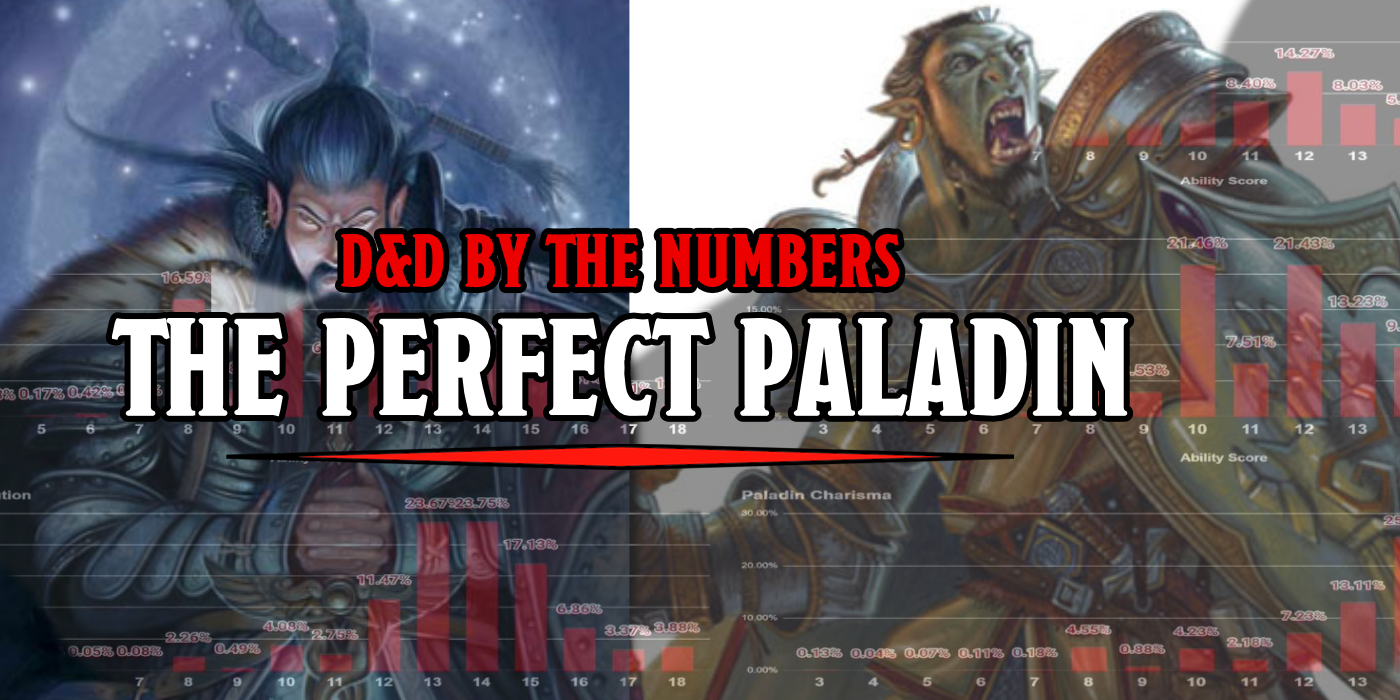 Paladins are known for striving for perfection–so today we’re going to run the numbers and see just what the perfect ideal of a Paladin looks like.

Perfection is in the eye of the beholder. But not, like the literal beholder, because that’s an Eye Tyrant and all that’s in their eye is disintegration or an antimagic field. Which, honestly, might be a kind of perfection all its own. We’re here to talk about the other kind of literal beholder–which is to say other people. Today we’re taking a look at what the beholders of D&D, i.e. the Players, are beholding for their Paladins. Because obviously whatever is the most popular is the best one, otherwise why would people pick it?

With that in mind, we’re going to let the numbers do their terrible work, and from them finally get at the perfect Paladin.

Clearly the answer is cool pauldrons on top of whatever other armor you have. Here’s a look at what people are putting beneath their needlessly elaborate shoulder-pads.

It turns out that Paladins are among the minority, in that they’re one of the few classes that is least likely to be Multiclassed. Even so, almost half of all players multiclass into something, and fittingly, Fighter and Barbarian are the top two combos. Which is interesting, because most of the “optimization guides” out there recommend Paladin/Sorcerer or Paladin/Warlock, so it’s nice to see that Optimizers really aren’t everything. So, our Paladin is likely a single classed pal, and once they get to a high enough level…

…you’ll swear an Oath of Vengeance. Because it looks like people playing Paladins are interested in one thing and one thing alone, dealing damage. Even the Oath of Devotion, which is all about healing, has features that amplify damage, but two of the top three subclasses are all offense-focused. Vengeance, of course, gives you the best stuff to do with your Channel Divinity, granting either advantage on all attacks, or giving you the ability to make someone run in fear for long enough to kill the rest of the encounter.

The other thing we have to do is figure out what kind of spells we pick–though for Paladins it matters much less, as mostly these are fuel for smites. And healing back those HPs. 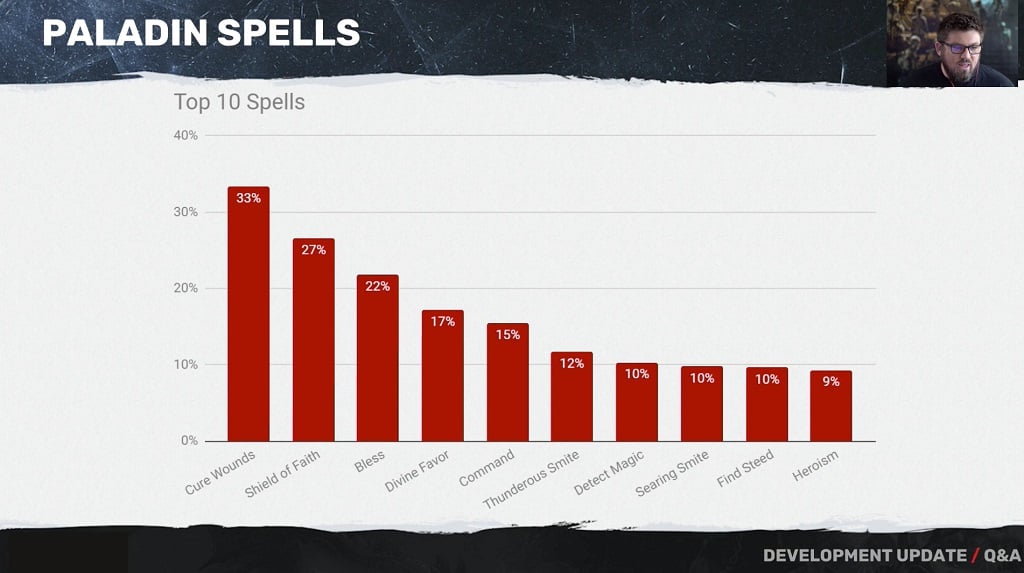 Cure Wounds wins out the top spot for Paladins, which makes sense because it’s the most popular spell in all of D&D, but it’s followed closely by Bless and Shield of Faith, so if you don’t smite all your spell slots away, you have a lot to offer your party. Paladins really can be the anchor around which a party wins a fight, especially as they gain a few levels. Paladin is a class that grows in power rapidly, every level up til 6th or 7th is pretty golden. 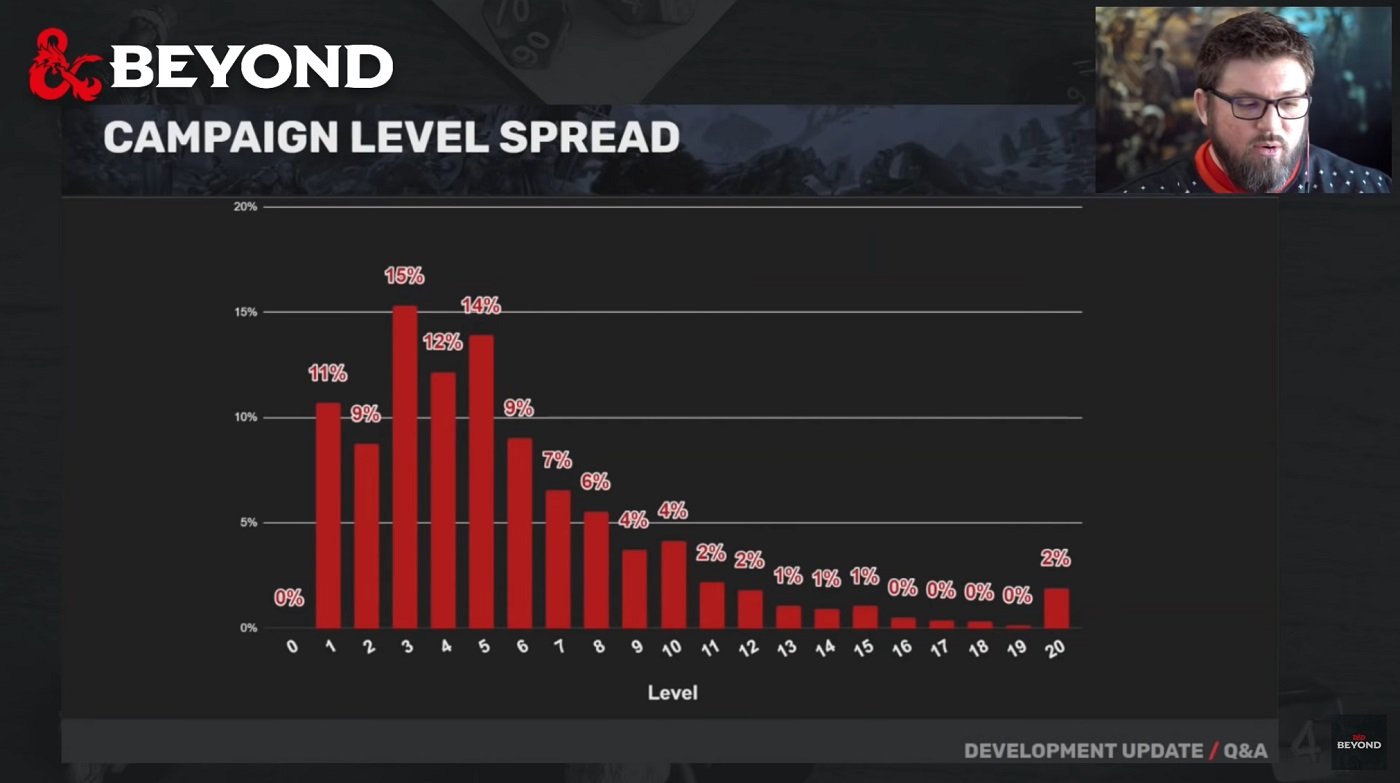 Now this particular Paladin is probably 3rd or 5th level, so we’ll have spells but not many. We still have a few more choices to make. Most notably, gear. Our perfect rogue is paladin almost certainly carries a shield and is wearing chain mail, according to this chart: 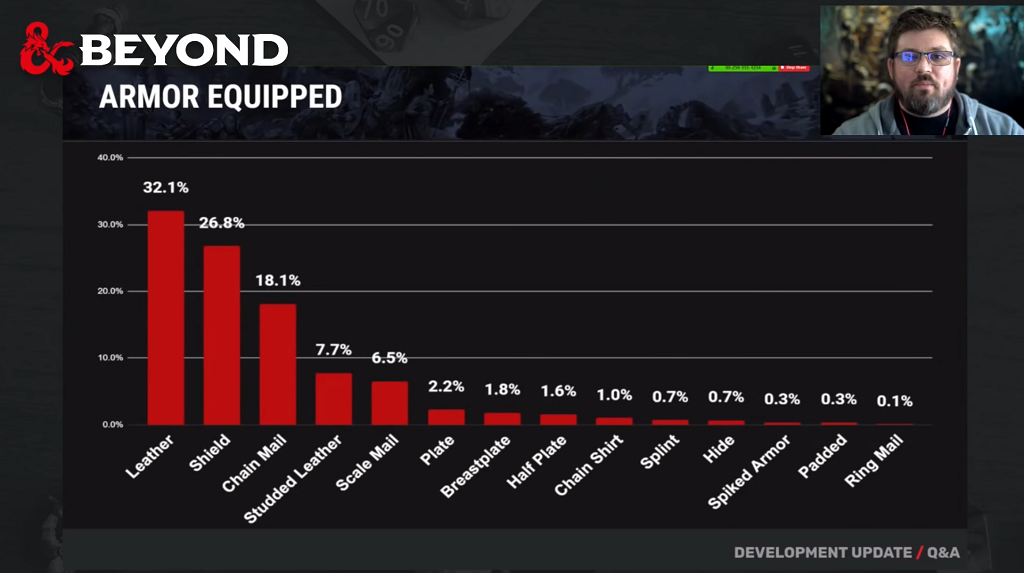 Which means that our average AC is probably 18. Maybe 19 if we pick the defensive fighting style. As for weapons? 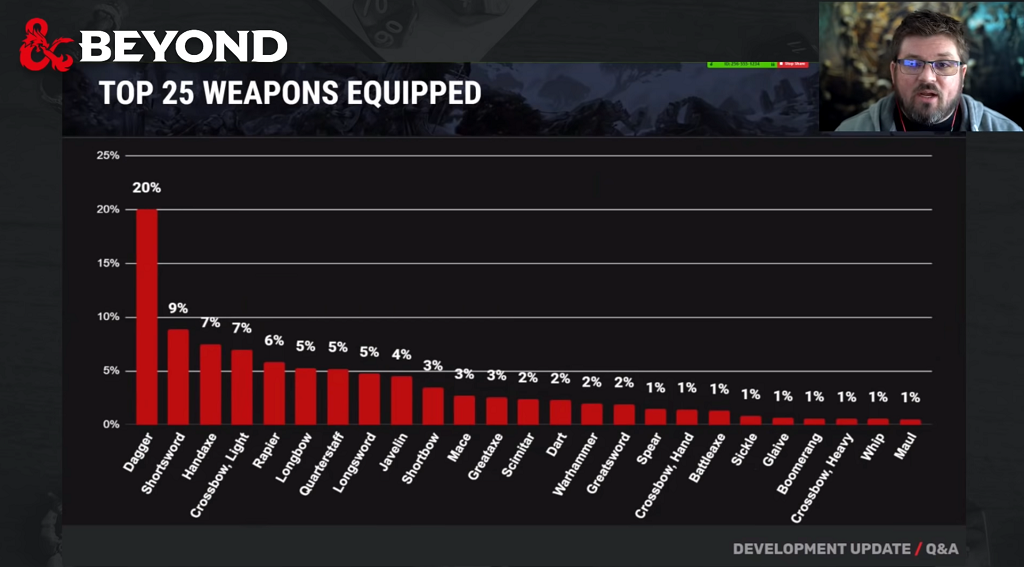 We definitely have a dagger, probably a light crossbow, and either a Rapier or a Longsword, but probably a Longsword because Versatile benefits us more than Finesse, but you never know. Now all we have to do is figure out how our stats break down. It’s interesting for Paladins, because they’re very heavily multi-stat dependent, with both Strength and Charisma giving them a huge benefit. 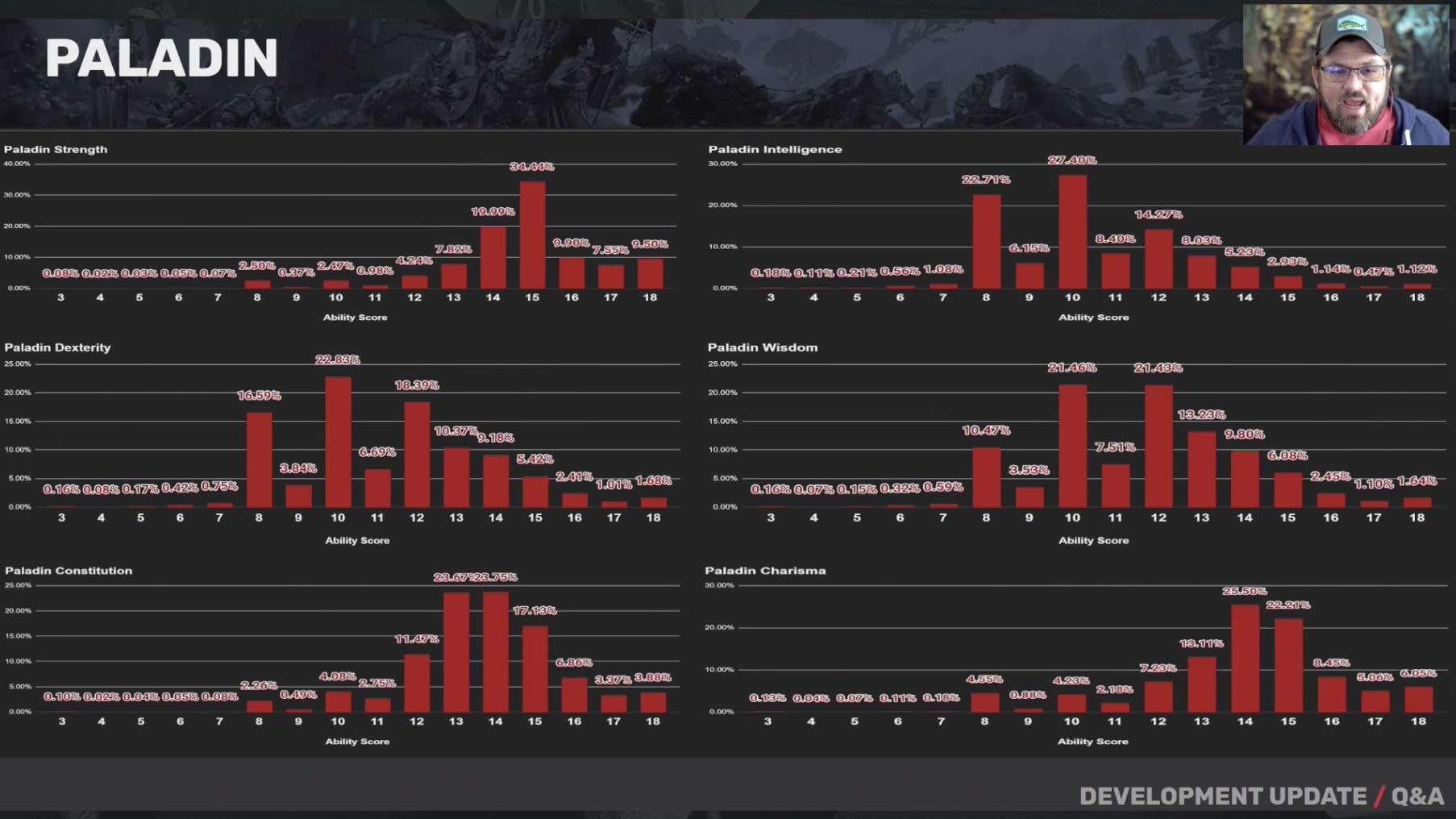 Nearly 35% of all paladins have a maxed out Strength, which makes sense. If you don’t hit, you can’t smite, and paladins live to smite. Charisma is the most popular second place stat, though sometimes it looks like it wins out–but looking at this spread, our paladin has a Strength of 15, a Charisma of 14, a Constitution of 13, a Wisdom of 12, and then either an Intelligence or Dex of 10, with the other one being a 8. And its just as likely to be one as the other. One last thing, if we’re playing with feats, we might almost certainly have one, and for Paladins, that means: 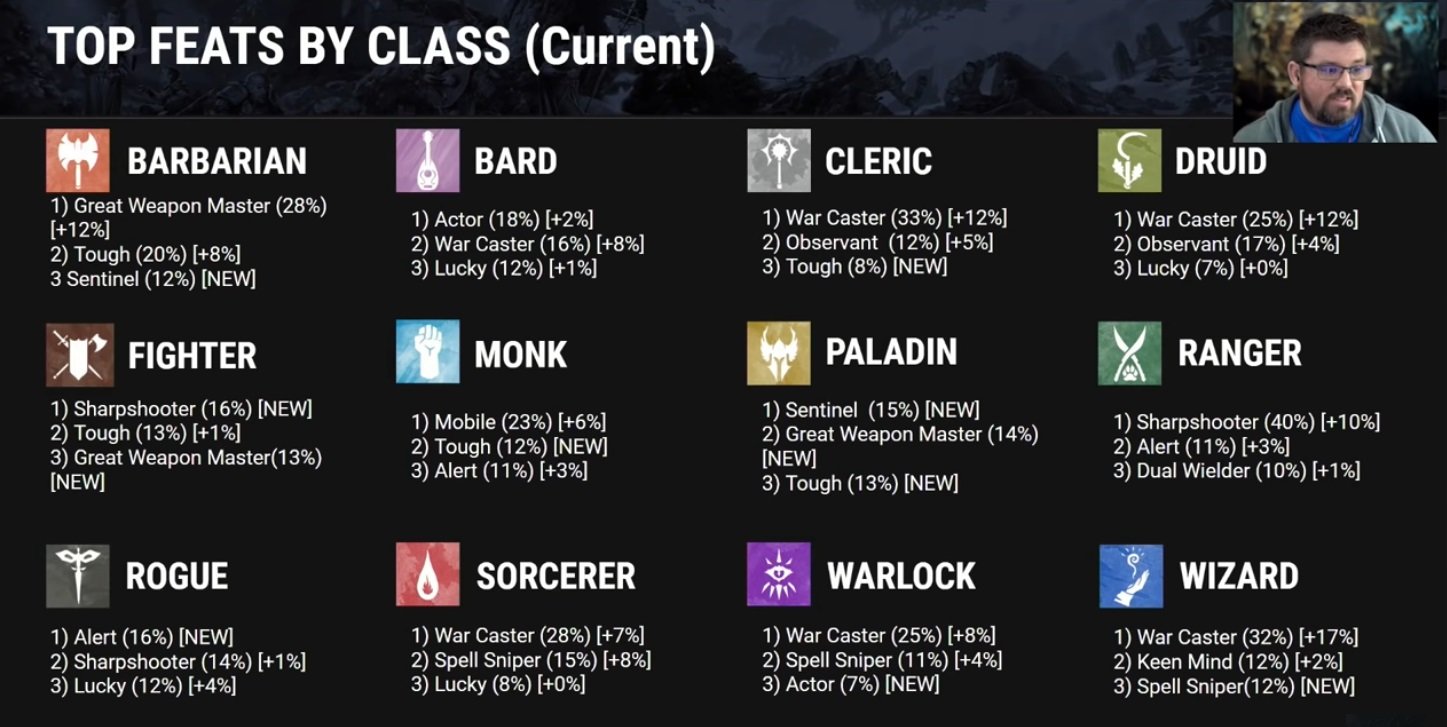 Sentinel. Which makes sense. We’re going to be all about locking down the battlefield. So paladins protect, and they can help lock down a foe, giving you more options to smite while you fight. And there you go, a paladin, by the numbers.