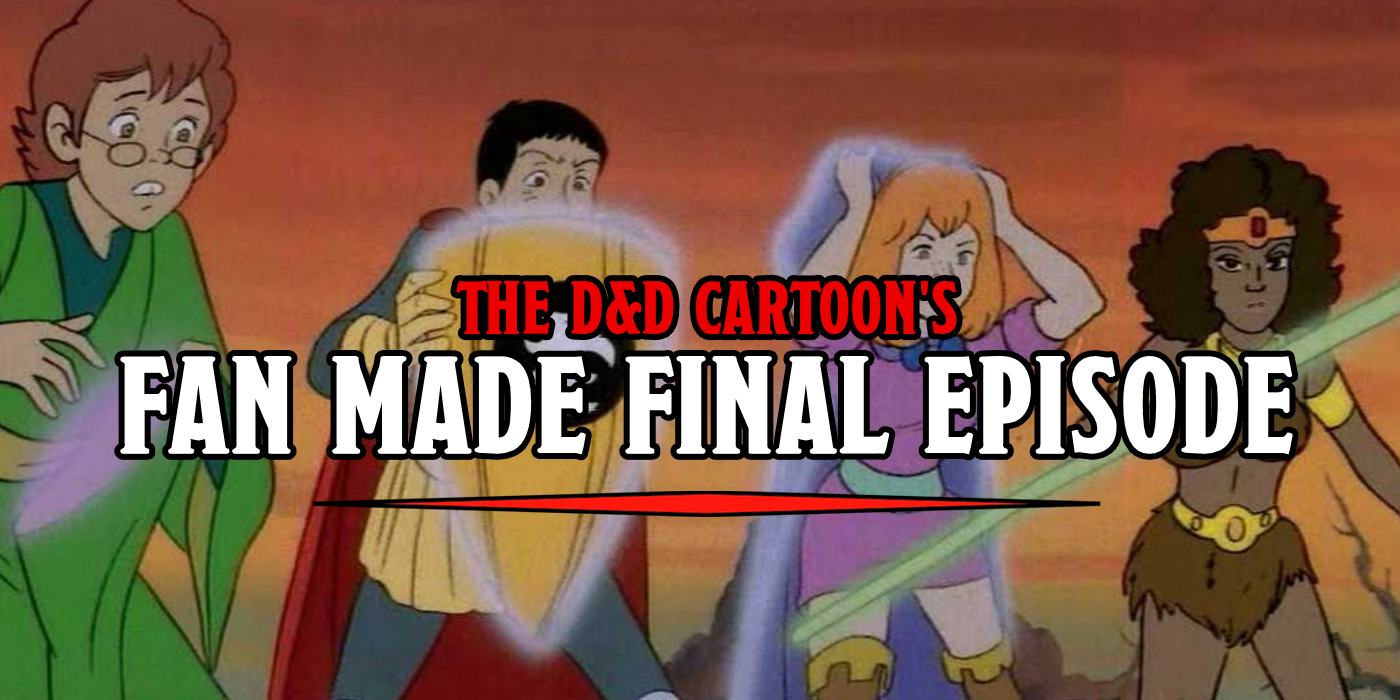 Of all the things to not expect in 2020–here’s something wonderful. Almost forty years later, the D&D cartoon finally gets the sendoff it deserves.

The D&D Cartoon is a phenomenon all its own. It is as 80s a cartoon as it gets, right down to the wisecracking wizard, the Scooby-Doo aesthetic, and the plotline that’s pretty much the ur-plotline for any story of modern day people drawn into a world of adventure. If you are somehow unfamiliar with the plotline of the show, it’s this: a bunch of kids and teens visiting an amusement park are summoned by magic into a world of both dungeons and dragons, by Dungeon Master, pictured here:

The smiling countenance of Dungeon Master guided them through almost three years of adventure, but the cartoon never got the ending it deserved, owing to the fact that the series was cancelled after its third season. There were plans for a final episode, which you can find as an audio drama if you track down one of the special edition DVDs, or you could watch the video below–a fan-made tribute to the bygone days of the D&D cartoon. This is a labor of love, that involves one of the original voice actresses, recut animations, and a script from the series writer. It’s the ending you didn’t realize you wanted. So buckle up, and return once more to Dungeon Master’s Realm:

The Final episode of the 1980s Saturday morning cartoon Dungeons and Dragons. From a script written by series writer Michael Reeves. Fully animated by using original footage from the series. Dialog from the DVD radio show released in 2006 by BCI eclipse. With original cast member Katie Leigh graciously reprising her role of Shelia. Music reconstructed from the original series (with varying degrees of success) The creators of this episode are fans first, amateur animators second. There are many things I wish could have done differently in this presentation, but I am very proud of what we have accomplished and it is my hope that those who love this cartoon as much as we do will be pleased with what we have put together. Ryan Nead- September 28, 2020

Official legal disclaimer:
Neither Ryan Nead nor I, Marshall Hubbard, own the rights to Dungeons and Dragons. The rights belong to Marvel-Disney-Wizards of The Coast Original cast voices appear in the episode, as well as a role reprisal from Katie Leigh to which she gave her legal assent. The radio production voiceovers used are owned by its respective corporation. This animation was made for the purpose of fan enjoyment is not owned by us in a way for commercial purposes.

Professional Disclaimer: I have attempted to follow Michael Reeves’ amazing script to the closest letter, except places that were beyond my abilities to create. His script ends at 28 minutes on an “open ending” that he was instructed to write by the producers, should the series continue to a 4th season. The extra events that occur after that are strictly my ideas (discussed with my co-creator Marshall Hubbard) on how to close out the series. With concepts and events stemming from previous stories, and in an attempt to bring a definitive closure to the story of the the search for a way home.