Warhammer 40K: The Artefacts of Vulkan 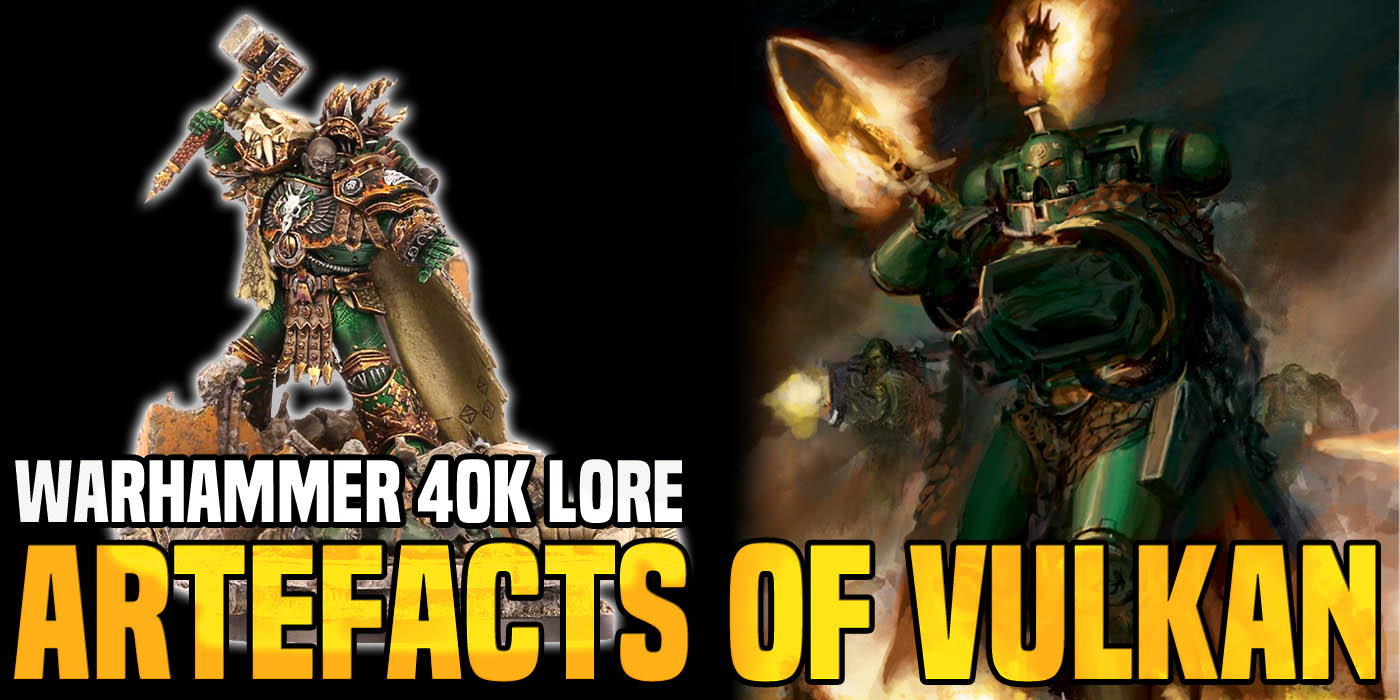 Nine artefacts forged by the Primarch Vulkan were lost, and the Salamanders search the galaxy for them. What mysteries do they hold?

The artefacts of Vulkan are nine artefacts forged by the Primarch Vulkan, the only survivors of what was once a vault of thousands. Of these, seven were chosen by the first Forgefather, T’kell, whilst the other two were carried by Vulkan to Isstvan V.

The Nine were, according to Salamanders lore of the 4st Millennium, scattered throughout the galaxy, and the Tome of Fire gives clues as to their locations. The one tasked with finding these artefacts is a Captain from one of the companies. He renounces his name and takes his Primarch’s name, Vulkan, and is given the title of Forgefather. So far, 5 of the artefacts have been located.

Before heading to battle against Horus following the events at Isstvan III, Vulkan traveled to Prometheus to meet with Forgemaster T’kell. After discussing how weapons can be abused, and how Horus’s fall represents that even the best of them could fall, Vulkan decides that he must destroy all of his artefacts, the weapons he was created to make. Vulkan takes T’kell into his vault and allows him to see many weapons, ranging from simple blades to mighty machines, created within. Vulkan tasks T’kell with their destruction, but T’kell pleads, saying that they represent Vulkan’s legacy and could possibly be used for good just as they could be used for evil. Vulkan relents on the order, declaring that T’kell would be his Forgefather, bound to Nocturne and unable to travel with them to Isstvan V.

This disturbs T’kell, but Vulkan allows him to choose 7 artefacts which he would preserve as the legacy: the Unbound Flame, Obsidian Chariot, Spear of Vulkan, Song of Entropy, Chalice of Fire, Eye of Vulkan, and the Engine of Woes. Their names were not always the original ones given by Vulkan, some were named after the legend that formed around them. If Vulkan was to fall, then the artefacts would be hidden. The rest, those not chosen, would have to be destroyed before Vulkan returns from the battle. T’kell was then left with the task to choose; Vulkan took his hammer Dawnbringer, the Gauntlet of the Forge, and Kesare’s Mantle. Vulkan’s Sigil, a hammer icon that formed part of the primarch’s Draken Scale, was recovered by Pyre Captain Artellus Numeon at Isstvan V. 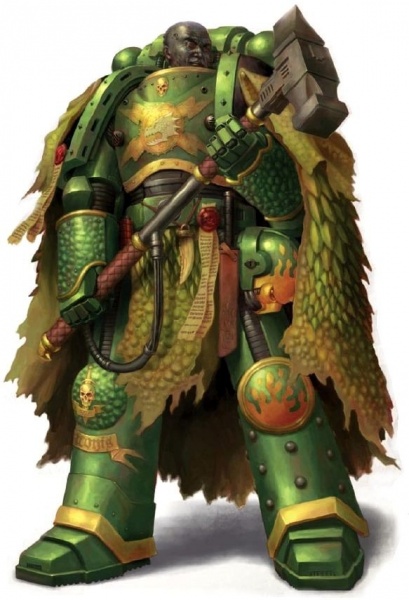 Within the Chalice of Fire, T’kell destroyed many of the artefacts in the ship’s massive furnace, watching the inferno through armoglass as he despaired over the loss. He felt that it was a second loss of Vulkan after the loss on Isstvan. He explained to the Firedrake Captain Rahz Obek that two of the items to be spared were the ship itself and a weapon upon its hull in addition to five other artefacts. The forge of the ship was so hot that nothing made could stand against it. Obek believed that it was for the best that the weapons be destroyed instead of possibly falling to the traitors, and T’kell speculated that it was probably why Obek and his men were left behind to guard Prometheus and the oversee their destruction.

When the Salamanders arrived at the Wrought, they discovered that Regulus and the Sons of Horus had arrived before them. Embattled in the vault, they were rescued by elements of the Shattered Legions under Iron Father Kastigan Ulok.When the Iron Father discovers the nature of the relics the Salamanders carry, he demands they be surrendered to him so that he could use them to find and kill Horus. The Eye of Vulkan fired on the Iron Hands‘ Battle Barge, destroying it and killing the Forgefather who was still aboard. In the aftermath of the battle, the Chalice of Fire was severely damaged, operating under failing reserve power. The remaining Salamanders aboard entered stasis to watch over the artefacts as they drifted through the void. 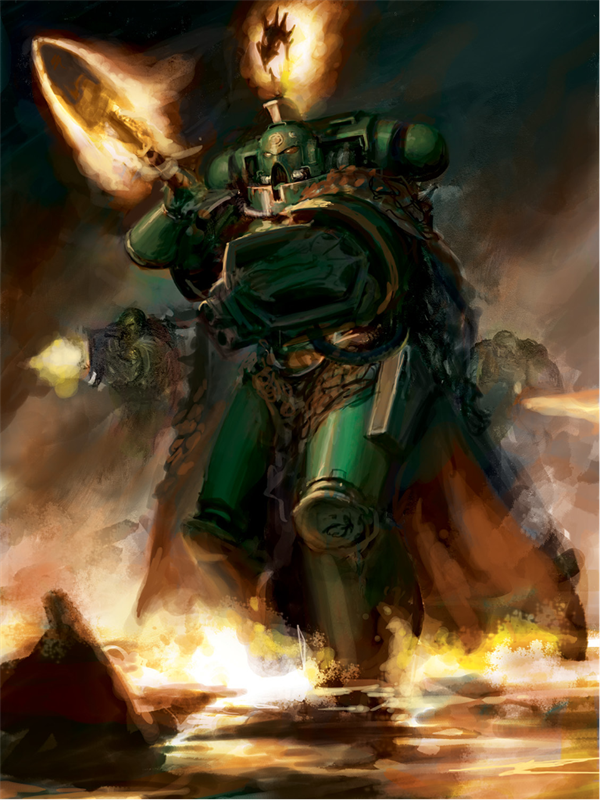 The first of the artefacts was not recovered until M41, when a force of Salamanders under the direction of Forgefather Vulkan Dir’san discovered the drifting Chalice of Fire. The Eye of Vulkan was still attached, but the other artefacts had been stolen from the breached vault. Vulkan He’Stan, the current Forgefather, carries three of his Primarch’s relics with him in his quest to find the remaining four; Kesare’s Mantle, the Spear of Vulkan and the Gauntlet of the Forge. 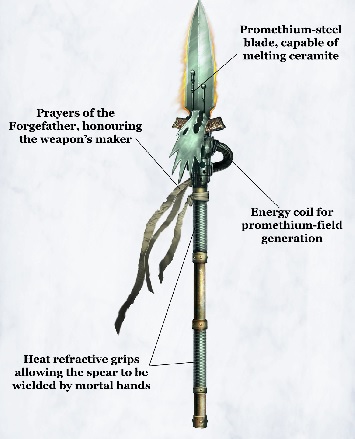 Of these artefacts unrecovered, only the names are known to the Salamanders of M41. Their size, form and location are locked within the riddles and encrypted passages of the Tome of Fire, there to be uncovered once Vulkan’s prophecies come to light.

Learn more about the Salamanders 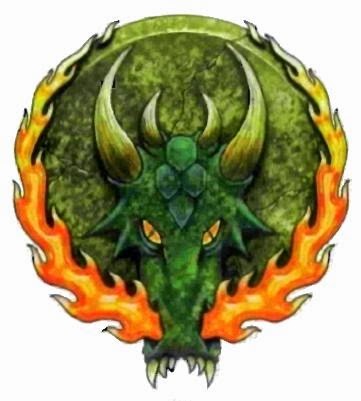 Author: Adam Harrison
Writer, Editor, Texas Native, and Austinite for 15+ years, Adam covers all things Tabletop Gaming. Which includes Warhammer 40,000, Age of Sigmar, D&D, Board Games and everything else that involves dice, boards, cards and a table. A hobbyist, player, and collector of miniatures and games, Adam's current obsession are his Death Armies for Age of Sigmar, his Blood Angels and Tyranids for 40k, and his ever growing Arkham Horror: The Card Game Collection.
Advertisement
Lexicanum Lore Space Marines Warhammer 40k
Advertisement 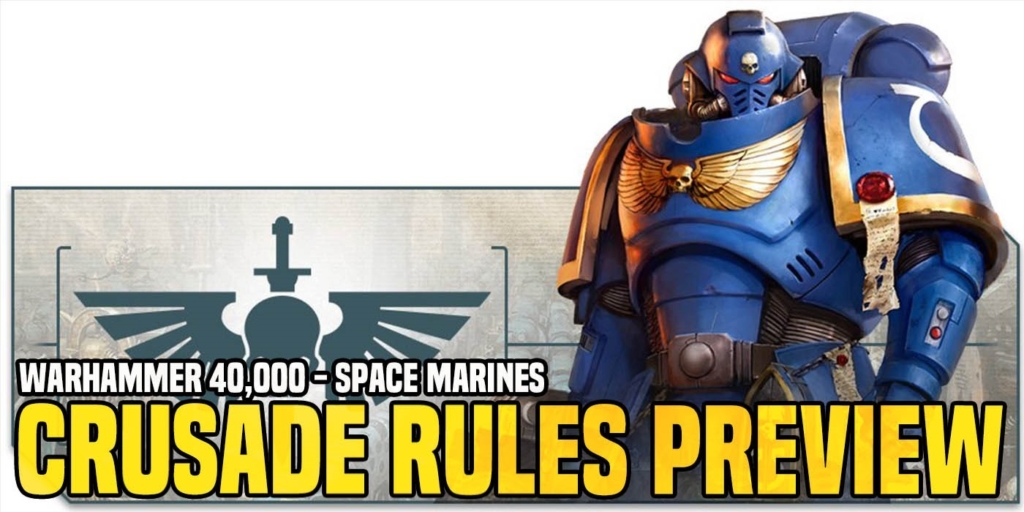