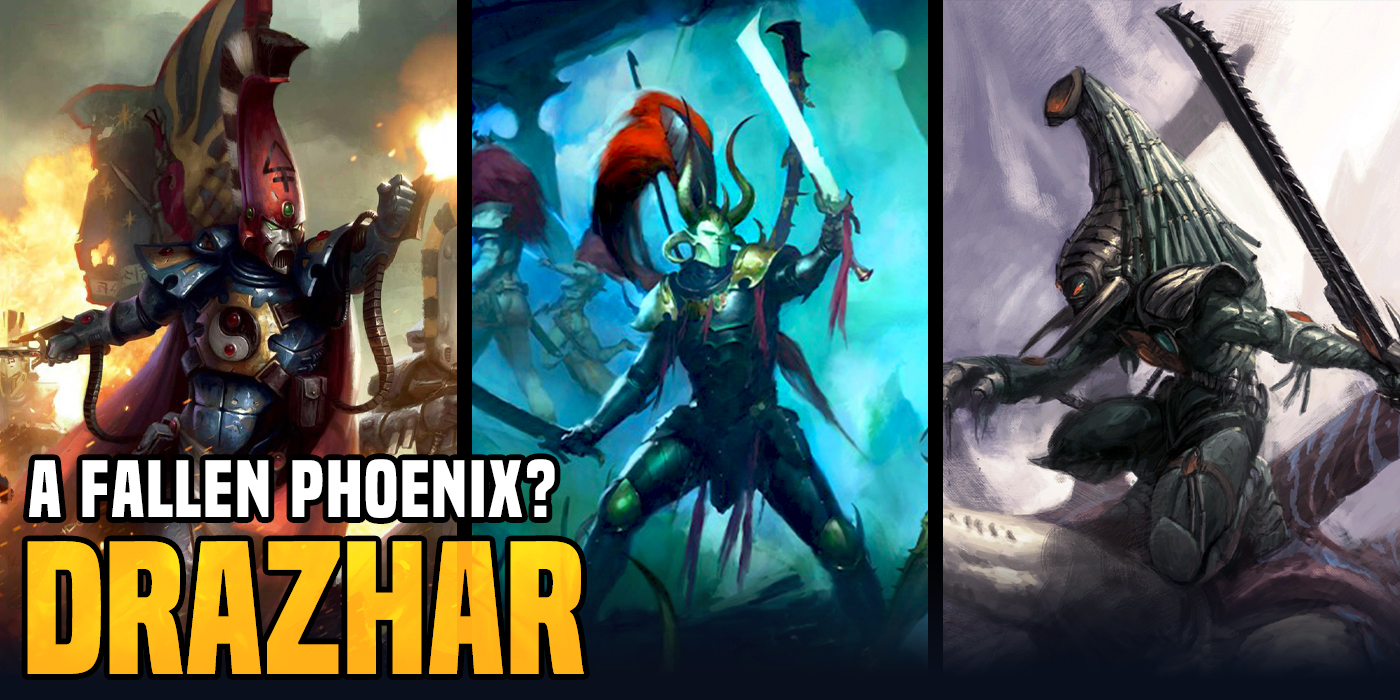 Drazhar is the master of the Incubi of Commorragh, but he may be the Fallen Phoenix – the only student of Asurmen to turn his back on his people.

Today we look upon Drazhar, Master of Blades, his shrouded past, and the two warriors cults he may have founded. 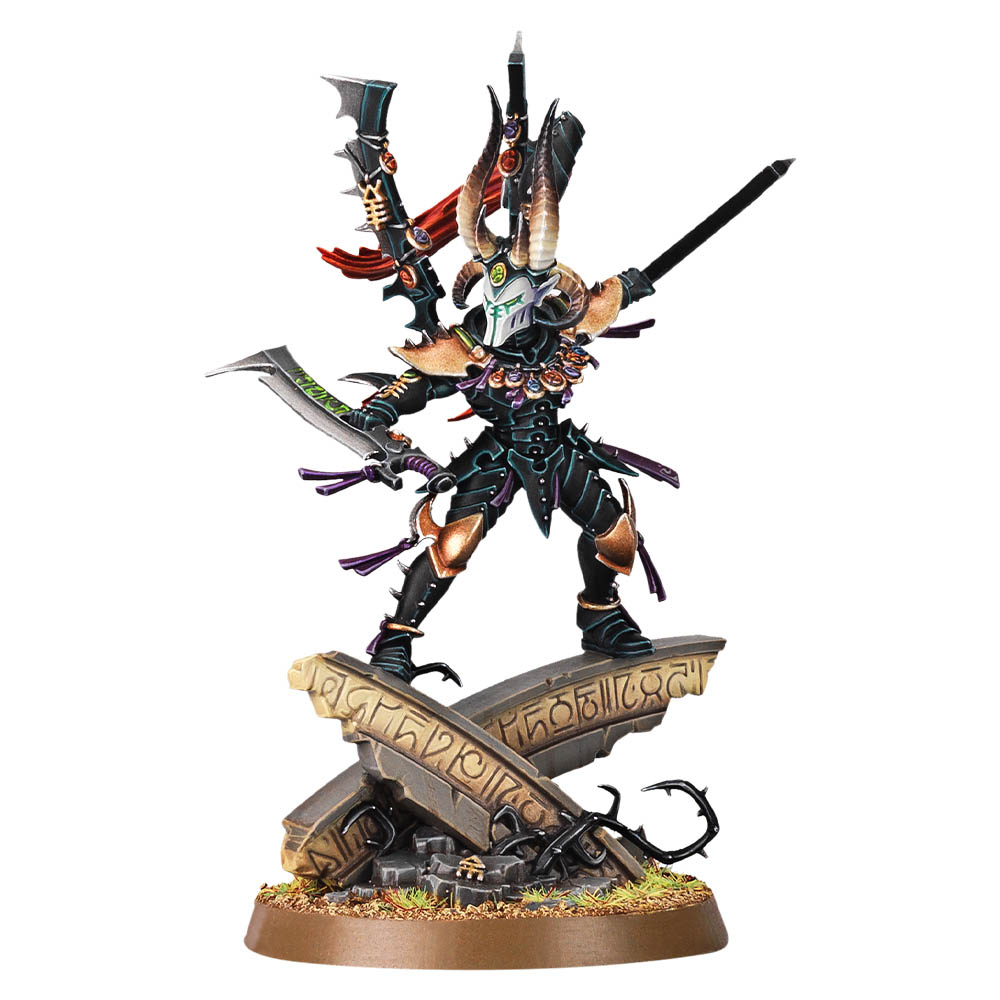 Drazhar was first encountered at the gates of the Great Incubi Shrine in Commorragh. He walked straight into the shrine, cutting his way through any guards who tried to stop him. When he reached the inner sanctum, Drazhar challenged the enthroned Hierarch of the Shrine. The Hierarch stepped down from his throne into the dueling circle with Drazhar and took up a battle stance. The Hierarch’s self-assured superiority soon evaporated when his challenger blurred into action. The duel took only a couple of minutes until it ended with Drazhar stepping over the Hierarch’s dead body before making a small bow.

No one knows Drazhar’s true identity. There are no records of him in any Incubus shrines, and no one had heard of him before he walked into the Great Shrine. Even the name Drazhar is ceremonial, meaning Living Sword.

After Drazhar had invaded the Great Shrine and killed its Hierarch, gossip and rumors started to spread. Some say Drazhar is the Fallen Phoenix, Arhra, and that Drazhar’s armor is filled with nothing but bone-dust. It is said that there is no challenger equal to Drazhar. All who challenged him have fallen under his blades. Drazhar has shown no inclination to take up the position of Hierarch or even Klaivex. He is the Executioner, and exists only to kill; nothing more, nothing less.

Taller and lither than other Incubi, Drazhar is fast as lightning. He wears an ancient Incubus Warsuit, perhaps even the original Warsuit, which is significantly tougher than those worn by others of the sect. Drazhar uses demiklaives or disemboweller blades which can also be used by deadly Klaivex Incubi leaders.

Next, we turn to Drazhar’s order, the heartless killers of Commorragh…

Incubi, like Mandrakes or Haemonculi, do not swear allegiance to any specific Kabal or Wych Cult. Instead, Incubi are trained in their dark shrines. These obsidian crafted shrines, all presided over by Hierarchs, are thronged by patrons and aspirants eager to steep themselves in the murderous arts. The smallest shrines have only a handful of Incubi; the larger ones are sprawling bastions full of howling marble statues with a central shrine where aspiring Incubi and other Dark Eldar come in their thousands to bargain for services or to join the order.

Training is extremely hard and grueling. Due to this, not every aspirant survives the training. These weaklings are burnt as an offering to the iron statue of Khaine at the heart of each shrine. The only way to stay alive is to quickly master everything taught. Should an aspirant live long enough to best a proven Incubus and take his armor, the final training will begin. Every aspirant must then kill an Aspect Warrior of the Eldar Craftworlds in single combat, shatter their quarry’s precious Soul Stone and rebuild it into a psychic torture device known as a Tormentor. After that, the aspirant can be considered an Incubus.

Incubi are the best warriors in Dark Eldar society. They are warrior-mercenaries living only to kill. Archons favor Incubi as bodyguards. They are also used extensively as enforcers in the city of Commorragh. Many pleasure dens or smuggler’s spires have been brutally destroyed by a host of Incubi to send a message to their employer’s rivals. The majority of Kabal leaders find it too dangerous to leave the protection of their lives in the hands of a member of the same Kabal, as the bodyguard would have ulterior motives for not sufficiently protecting the Archon. Incubi, on the other hand, are completely neutral in matters of Kabal hierarchy, follow the code of their contract and their Klaivex leader zealously, and are elite warriors, all of which make them perfect bodyguards. But in Commorragh, even the finest blade can still sometimes cut both ways.

Which, in turn, takes us to the Incubi’s Craftworld parallel Aspect Warriors, who are uncannily similar.

The Striking Scorpions are one of the forms of Aspect Warriors used by the Eldar, focusing on the close combat aspect of the battle. They epitomize the deadly attributes of their namesake, which can sting and kill a creature many times its size. Preferring to stalk their enemy and strike at them from the shadows, they are merciless killers who revel in the hunt and the kill.

Striking Scorpions are not only among the most powerful and violent close-combat specialists fielded by the Eldar but excellent infiltrators, stalking their prey through the shadows before falling upon them like the wrath of Khaine himself. Compared to their closest cousins, the Howling Banshees, Striking Scorpions are not as swift but instead more adept at moving through dense terrain, using every available nook and crevice to lie in wait of the enemy before unleashing their attack. Only those Eldar of the strong physique can become Striking Scorpions to wear their armor and wield their weapons.

Which at last takes us to a solution for Drazhar’s true identity: 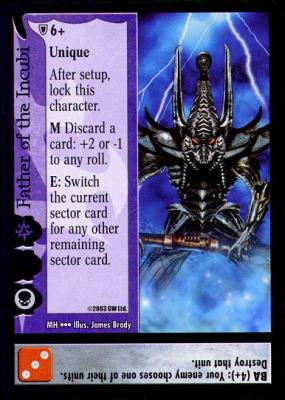 The Fallen Phoenix was the original Phoenix Lord of the Striking Scorpions. He turned to the side of the Dark Eldar after the Fall of the Eldar. Arhra was last seen on Zandros in 928.M41 where he dueled for seventeen days with his supposed successor, Karandras. Outnumbered and unable to defeat his former master in combat, Karandras skillfully goaded Arhra into a killing frenzy. At the critical moment, the Shadow Hunter was able to melt into a patch of darkness and disappear entirely, resulting in Arhra slaughtering his own disciples in a murderous rage.

I believe Drazhar is the Fallen Phoenix, do you?