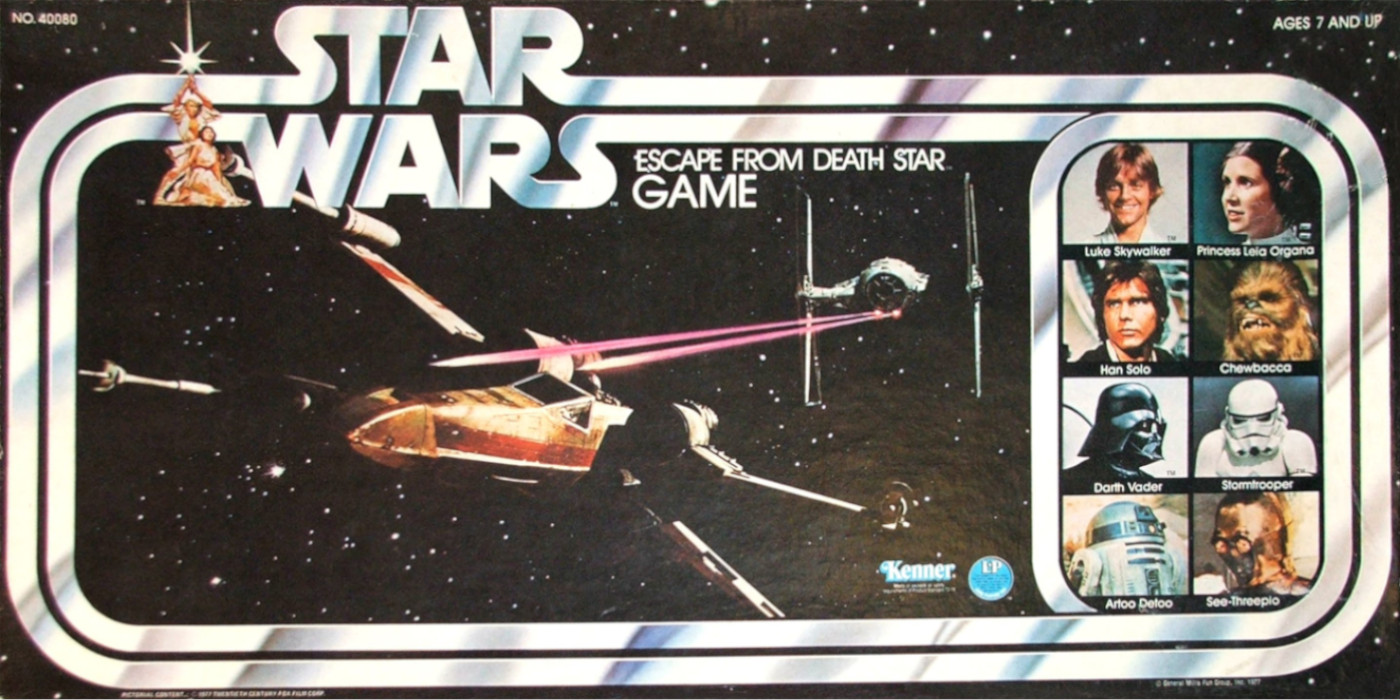 Released in tandem by a cereal company, these games laid the groundwork for the (much better) games of the future.

It’s a shame we don’t have more movie tie-in board games nowadays. Think about how great a game based on, say, The Avengers would be. I mean, considering how much money that franchise has and how beloved their characters are, it would be crazy impossible for that game to not do well, right? That mindset has unfortunately fallen by the wayside. But during the heyday of such gaming integration, we were blessed with 2 lovely games brought to you by the same company that makes Totino’s Pizza Rolls and Lucky Charms. 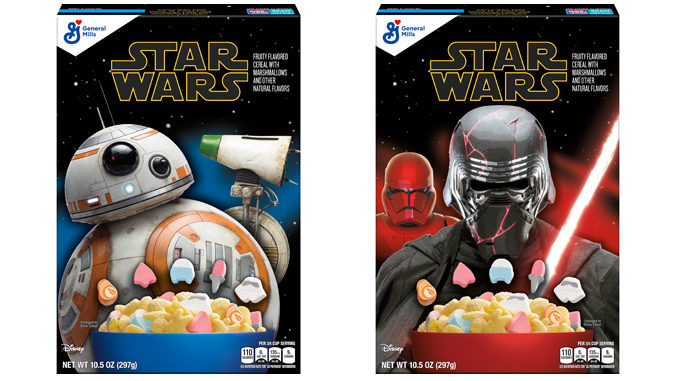 Wasn’t the last time they worked together.

Back in 1977, a company by the name of Kenner released 2 board games to coincide with the release of Star Wars. Kenner’s parent company was General Mills. This doesn’t really impact the game or anything, but it’s a fun fact for you. 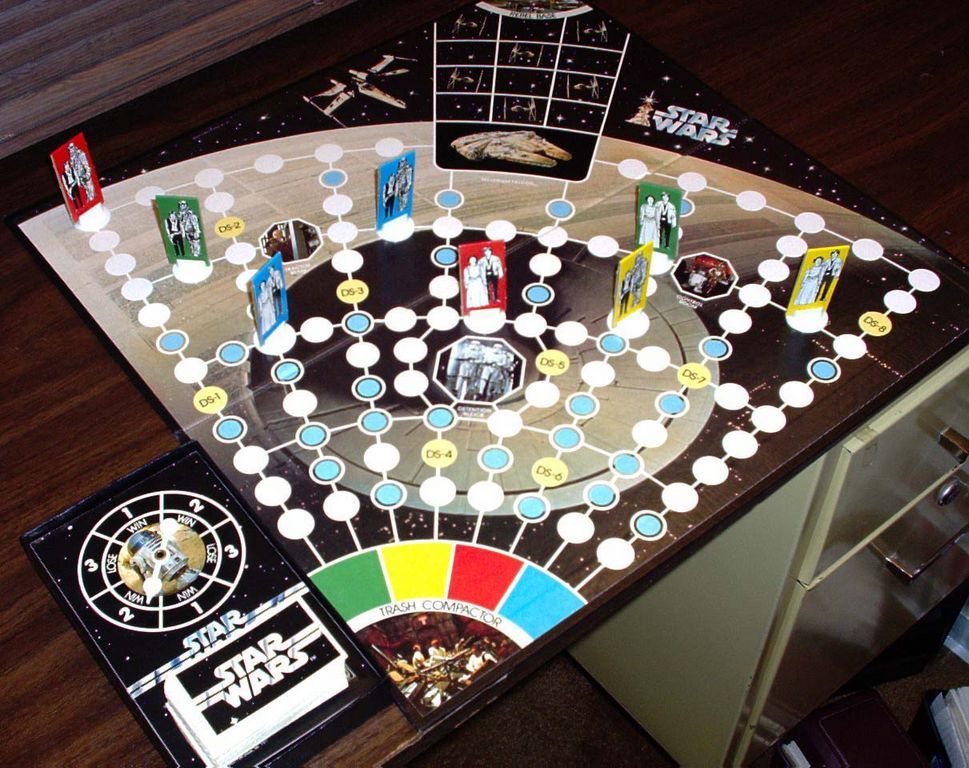 The two games they released were meant to be played back-to-back, which is a pretty neat idea for the time. Although, they didn’t really expand on it at all. The first game in the… series? is Star Wars: Escape From Death Star tells the story of Star Wars: A New Hope from about a little over half way through the story to about 80% through, then the second game, Star Wars: Destroy Death Star Game plays out the scene of the rebels blowing up Death Star.

Now that you’ve watched this once, watch it again but REALLY listen to their attempt at making background music.

Both of these games are competitive roll-to-move games with the ultimate goal of reaching the end of the board first. They both have a few mechanics which make them slightly better than some similar games of the time, but not by a whole lot.

In SW:EFDD, players begin the game by each taking 2 tokens of the same color, one with Luke and Leia and the other with Han and Chewie. All tokens start in the Trash Compactor, with the ultimate goal being to reach the Millennium Falcon and return to the rebel base. 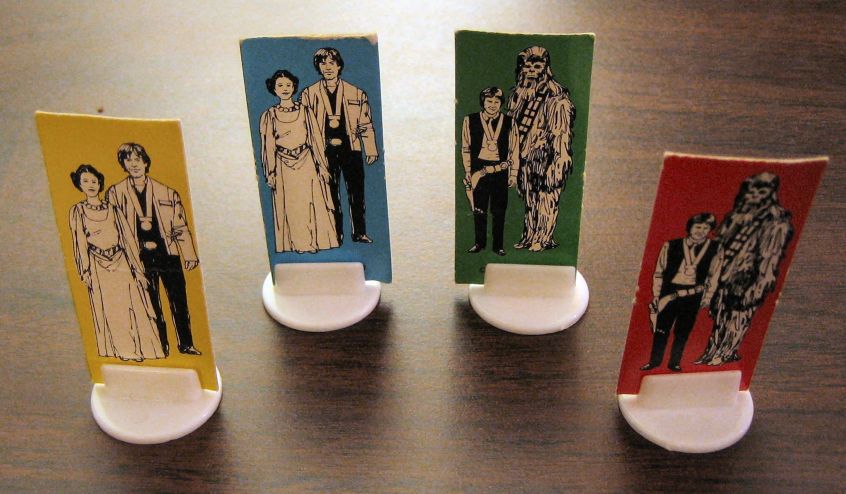 But, before they can escape, they need to complete two missions by moving to specific spaces on the board. Each player needs to collect the Death Star blueprints and shut off the tractor beam. By moving into those spots on the board, they get to collect that card. Once both are collected, they can move to the Falcon. If along the way, they land on a blue space, they draw a Force card, which can do all sort of stuff. 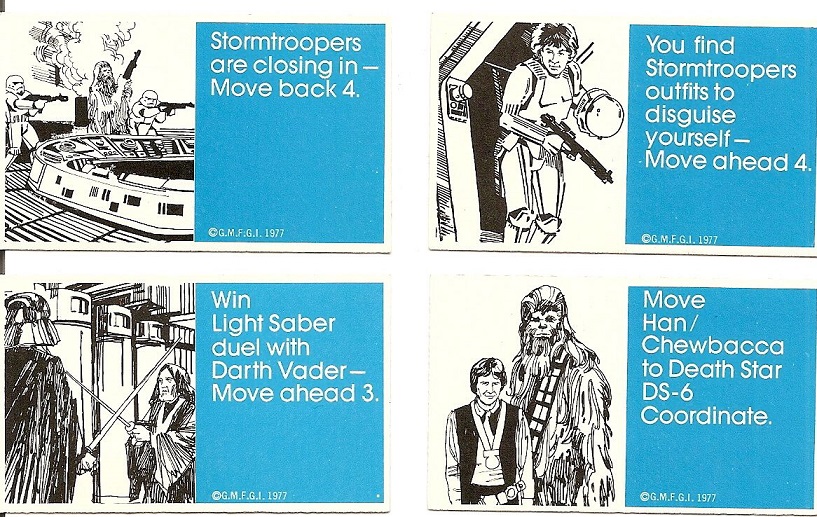 I’m concerned about Obi Wan using his fencing foil instead of his light saber, but he knows best.

Once both a player’s tokens are aboard the Falcon, they move together toward the Rebel Base. Each time they land on a Tie Fighter, they must spin again and try to land on Win in order to progress. Otherwise, they move back to the Falcon. The first player to reach the Rebel Base is the winner!

At first glance, SW:DDSG seems like it has real potential. It’s got X-Wing miniatures and a rotating board! That sounds awesome! Boy oh boy, do I have some disappointing news for you! 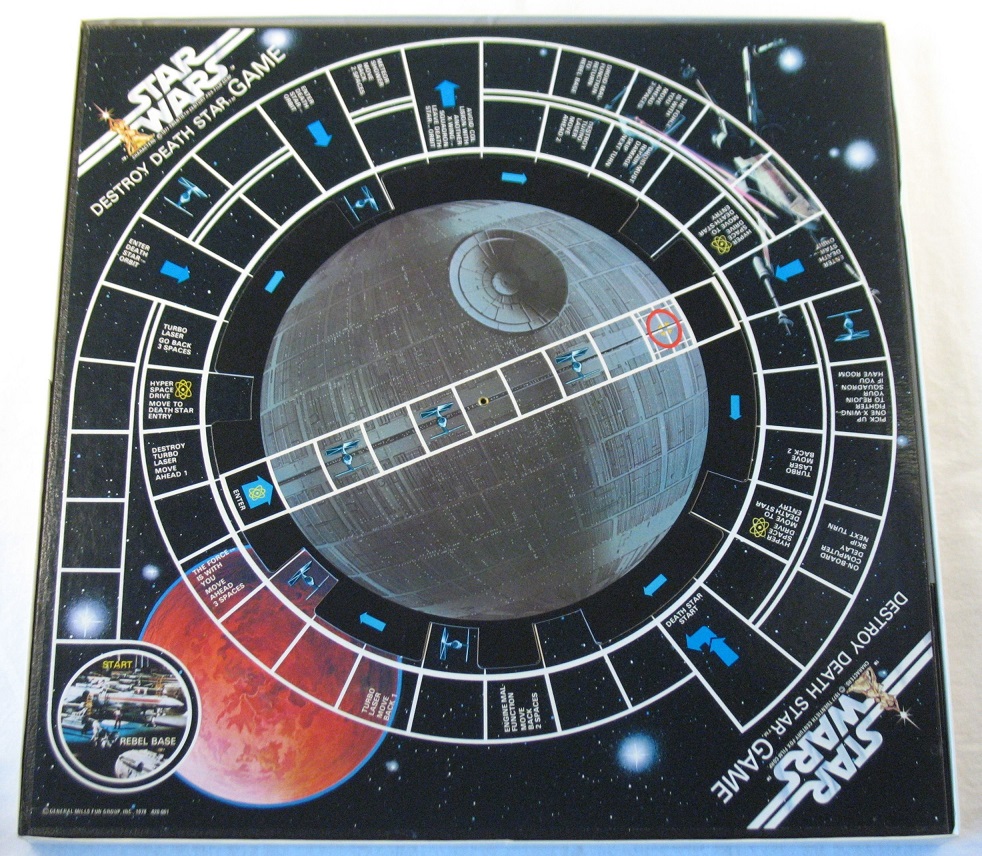 This game is much more straightforward than SW:EFDD. Each player controls a squad of 3 X-Wings. 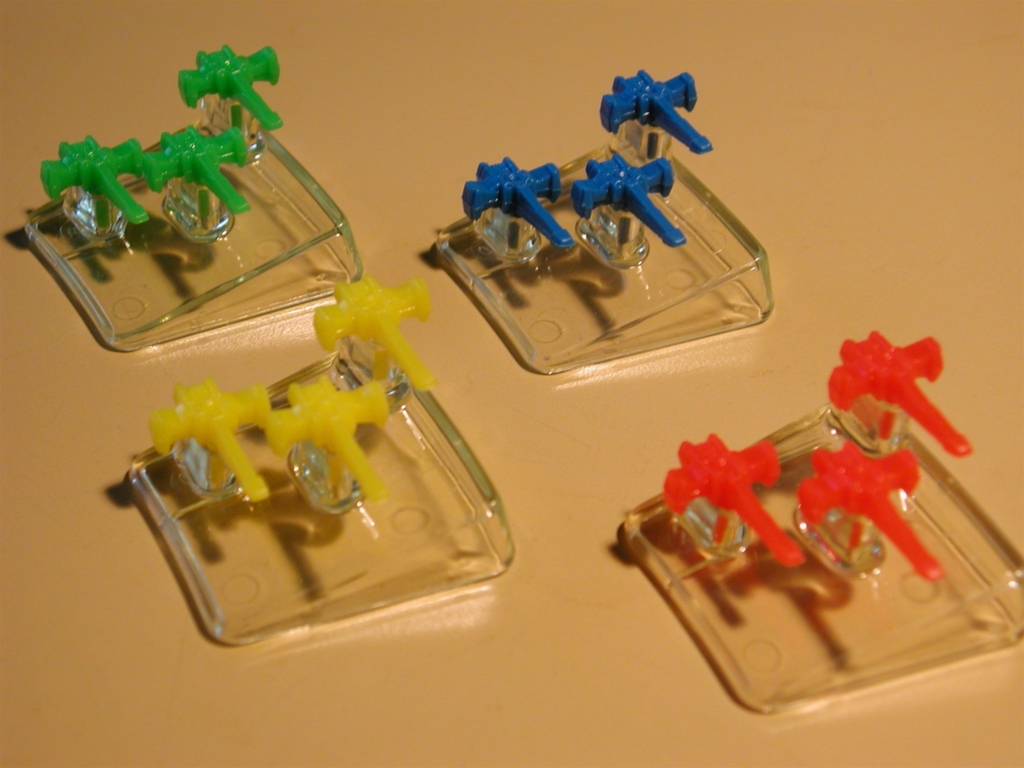 On their turn, they spin and move that many spaces. At the end of their turn, each player rotates the Death Star by 1 space. The first player to land on the exhaust port by exact count wins. 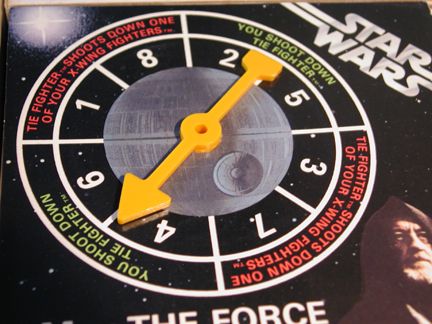 Yup. That’s basically it. But, don’t worry, it gets worse.

You have to land on the exhaust port by exact count. And if you miss it, you have to fly all the way around the board and try again. BUT the Death Star in the center rotates with every turn, so suppose you’re playing with 4 players. The spinner goes from 1 to 8. So, if you spin a 4 or less (which is half the time), you wouldn’t have made any progress, since the entry space keeps moving away from you on every other player’s turn. There isn’t even other paths or routes to take. The players in this game have literally no interaction with the game at all.

But at least it looks super cool?

These games are products of their era, for sure. But they are definitely great collector’s items if you’re a die-hard fan. But this isn’t the only Star Wars board game released by Kenner. So, comment down below if you’d like to hear about the next game in their series: The Adventures of R2-D2! 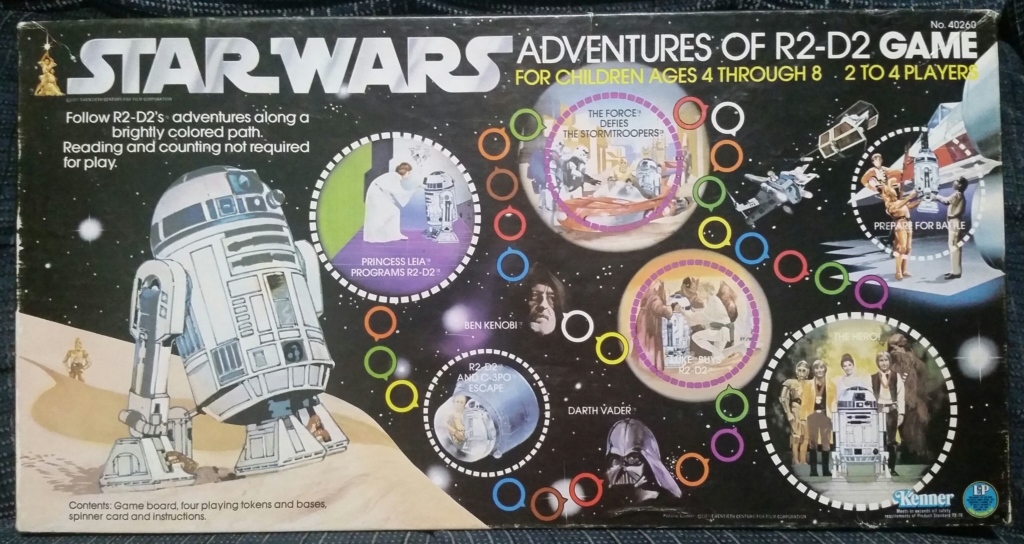