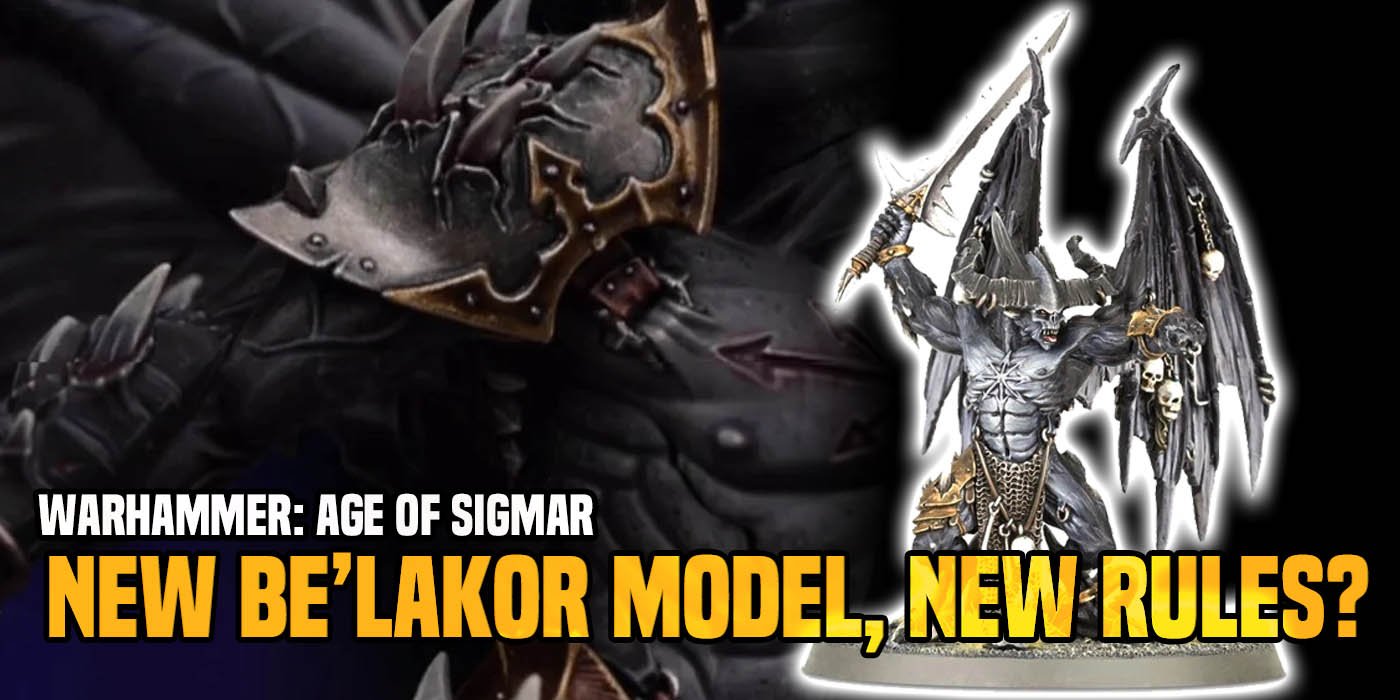 We’ve only seen the teaser for Be’lakor’s new model. He’s looking mean and imposing so let’s hope he get some new rules to match.

Before we dive into his rules, let’s just take another moment to appreciate this new model’s teaser and appreciate his upcoming plastic kit:

He’s looking pretty big if these composites are anywhere close to accurate: 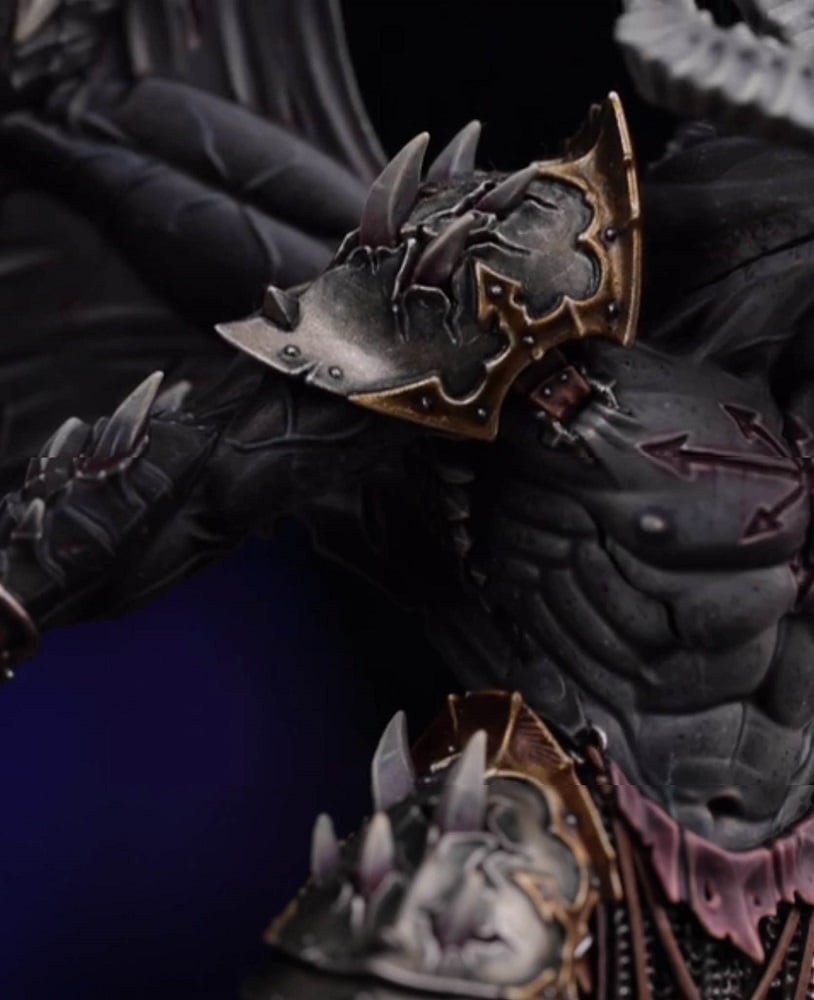 He’s going to be much larger than his current incarnation: 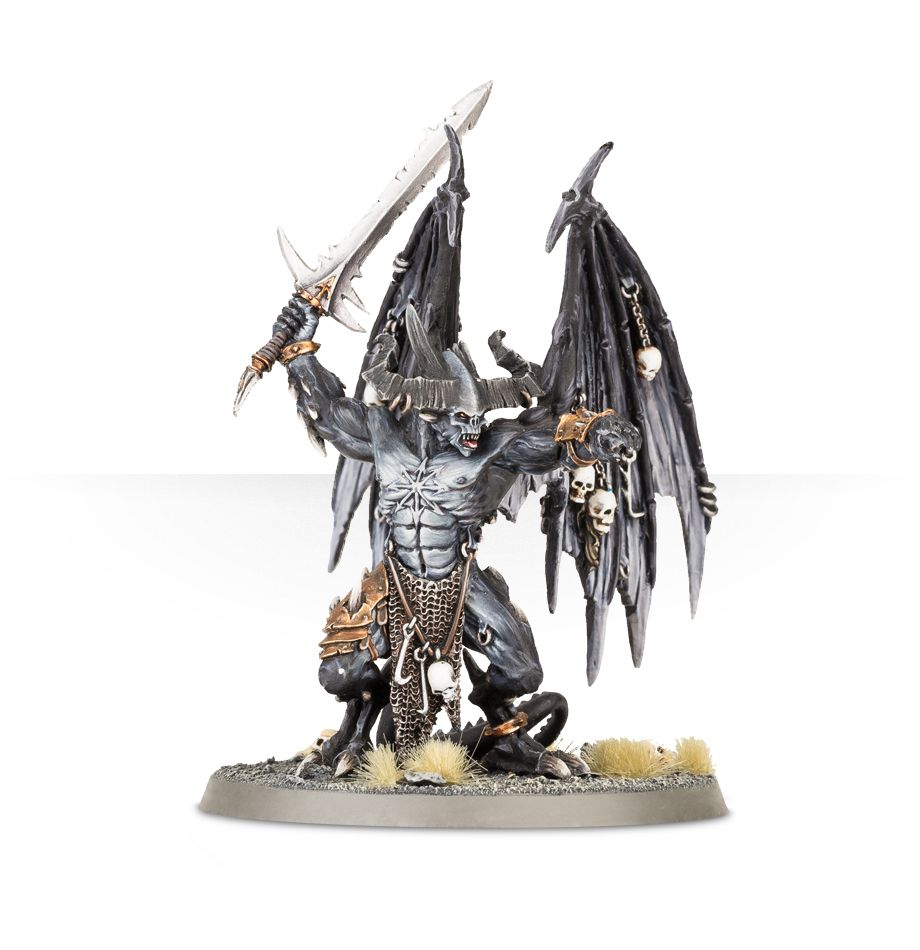 And that’s why he needs to get a rules overhaul to match. But what are his rules now? Let’s take a closer look at those: 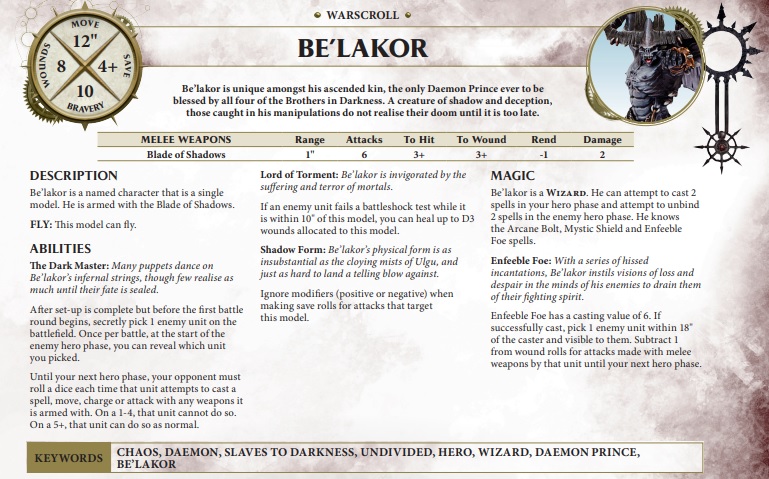 Stat-wise, for a flying unit a 12″ move is fine. With the new model, I could see him getting another wound or two – he’s been working out. The 4+ save fits if the Shadow Form rules stays (and it probably should). And Bravery 10 on a solo model is fine – especially for this Daemon Prince of Chaos.

The Blade of Shadows could use an upgrade IMO. He does have 6 attacks and the potential to do 12 damage. I think 6 attacks is probably fair – but I think it could use another point of rend making it -2. This could represent his daemonic strength being able to push through the armor of his foes – this is a Blade of Shadow after-all.

In terms of extra rules and abilities – he’s got wings so having Fly fits. And Shadow Form (as mentioned) is in a great spot for this character already. Ignoring all modifiers for that 4+ means it’s basically a 50/50 shot for each attack that actually hits and wounds him. Lord of Torment is also interesting. Healing D3 when enemies fail battleshock is an interesting mechanic. There isn’t a cap on that in the rule so if 2-3 units failed within 10″ I’d assume you’d get that D3 roll per unit.

“I’m pointing at my next victim.”

He’s also a spell caster and and sling two spells a turn. And make two unbind attempts also. Not too shabby! He doesn’t have any bonuses to cast/dispel however. And that Enfeeble Foe spell can be super impactful in a game. Should he get a bonus to cast/dispel? Maybe, maybe not – I think he could go either way.

And finally we circle back around to the ability that kind of ruins games for me: The Dark Master. There is a reason I was saving this for last and it’s because I kind of hate it. If you removed it from his ability pool, Be’lakor is already a solid choice. Obviously, he would end up with a points reduction but I think he’s a steal currently at 240 points with this ability. So what does it do? 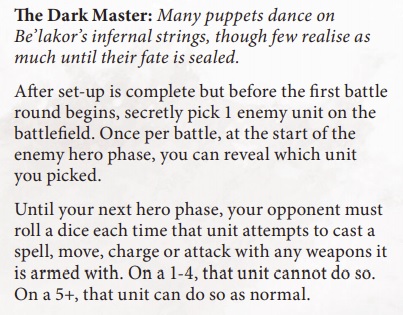 Basically, the Be’lakor player picks a unit at the start of the game (they should write it down without showing the other player). Then, once per battle, at the start of the enemy hero phase, you can reveal which is about to get hozed. Until the start of your (the Be’lakor player’s) next hero phase, that target unit can’t really do anything without making a roll and only on a 5+ do they get to actually do the thing they wanted to do. If you time this right, you can literally shut down a key unit for two turns by using this on the unit when they are going last and then actually hoping they get the double turn.

If you ever had this happen to you then you know – this sucks. I’m not a big fan of game mechanics that stop me from getting to play with my toys like this. I don’t mind things like Enfeeble Foe where the unit gets debuffed. But completely denying key actions – casting, moving, charging, or attacking? That’s a “feels bad” moment and it kills the fun for me. “But it’s only 1 unit and you still can do stuff on a 5+” …yeah and that can be ANY unit from the lowest Goblin speed bump unit to Armies-of-One models like Archaon or Nagash.

So yeah, I’d like to see this rule get reworked completely. How about we make it a Bravery Test for that unit if they want to try to do those things listed above? That makes the Higher Bravery units not turn into unless masses while the lower leadership troops might actually be swayed by this Daemon Prince. That seems both more thematic and fitting. Would Archaon likely be swayed by Be’lakor? Not as often as Be’lakor would like. And that seems way more appropriate.

Now – having ranted about that ability, I think it should be reworked from a Once Per Game thing into a Command Point thing – and you can pick an enemy unit within X” range now. It’s still limited but he’s got that looming threat now too. I’m still not a fan of it, but it’s kind of a signature thing for Be’lakor to be a bit of a puppet master. Let him pull some strings I suppose. 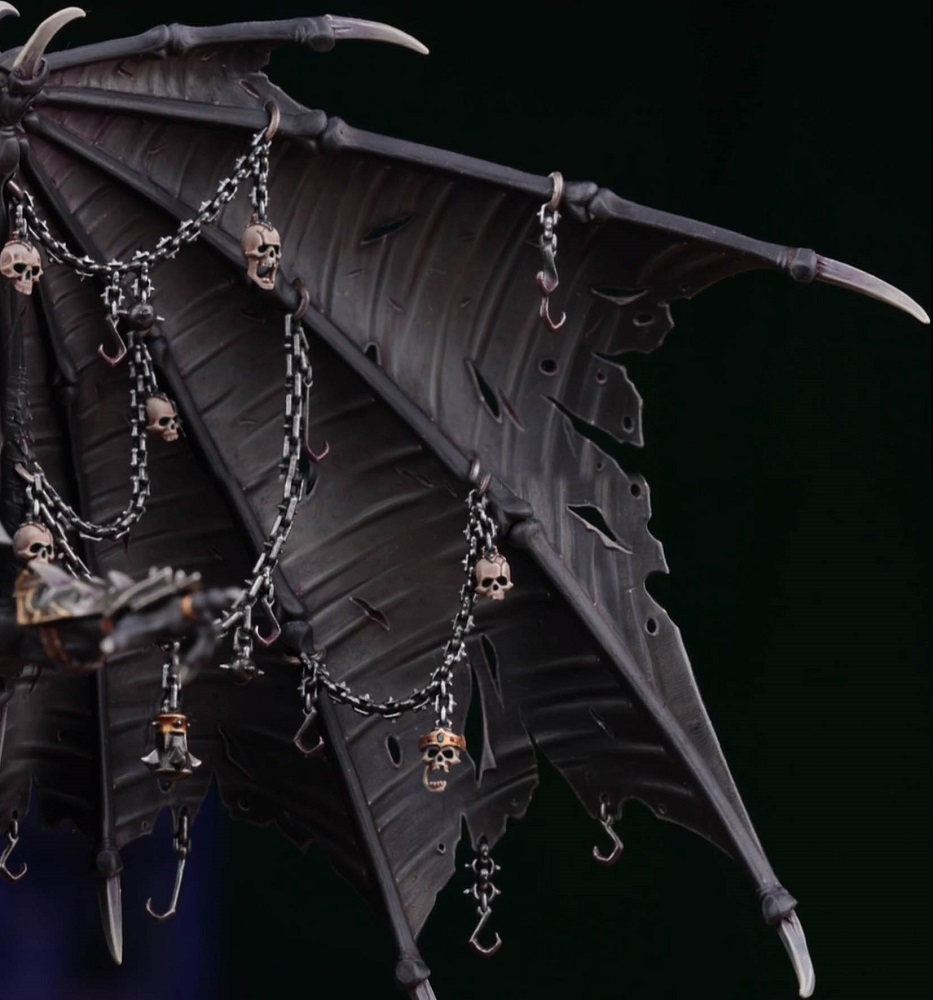 Anyhow, with these (or any) changes, Be’lakor should get a points adjustment. If he gets a bunch of buffs and no change to his stupid Dark Master ability, I think he should go up. If he stays the same and GW reworks Dark Master (PLEASE) then maybe he goes down. It all depends on how GW does it – but in the end, I just hope he gets some rules more befitting this great looking model!