Warhammer 40K: Curse of the Wulfen 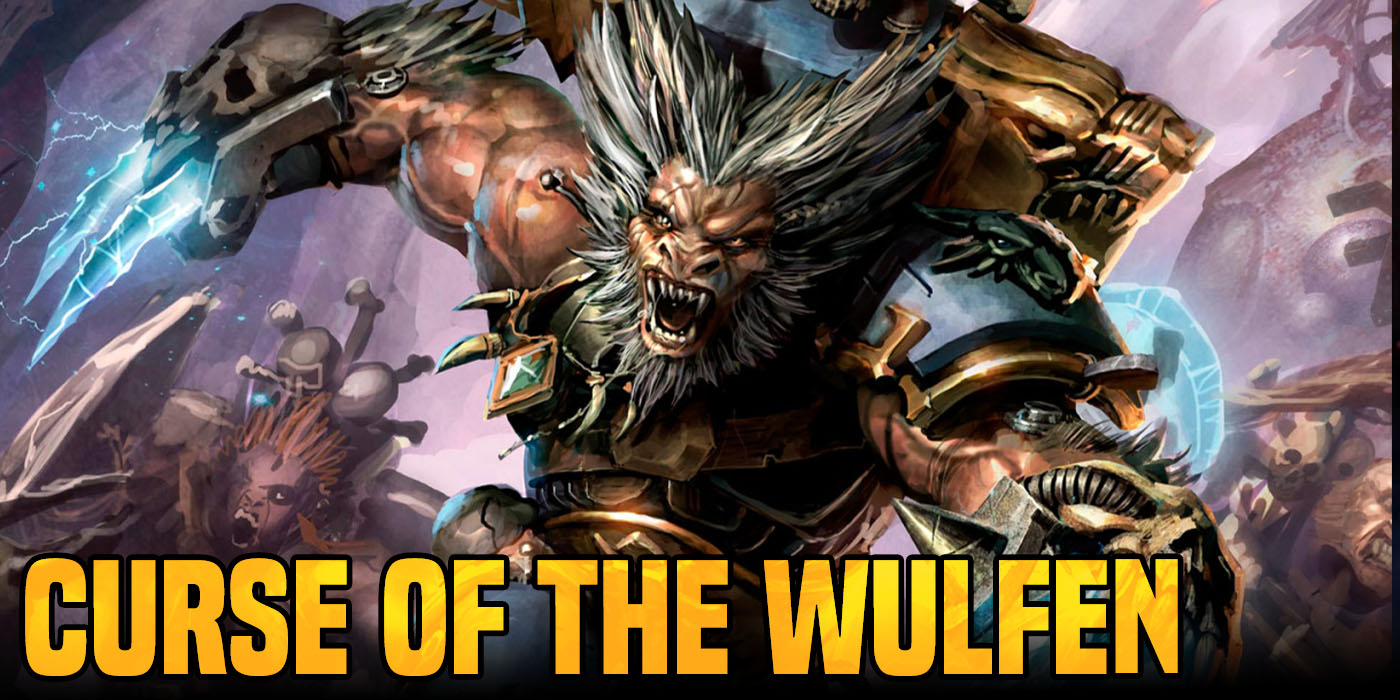 Delve into the ferocious feral secret of the Space Wolves – doomed and lost brothers, the Wolfen.

Wulfen are feral man-wolf hybrids, created by an adverse reaction to the gene-seed of the Space Wolves.

History of the Wulfen

The unique properties of the Wolves’ gene-seed gift their brothers with enhanced abilities beyond even those of other Space Marines, including hyper-acute senses of smell and hearing, elongated canines that can dent plasteel, and leathery, resilient skin. Unfortunately, these same properties risk turning the man who absorbs them into a feral beast, an aspect known as the Curse of the Wulfen among the Space Wolves.

The first risk of transformation comes during the final initiation rites for Aspirant Wolves, when they drink from the Cup of Wulfen and absorb the first and most deadly component of the gene-seed, the Canis Helix. The Helix causes a violent transformation to the Aspirant’s body which is always painful and sometimes fatal. Those Aspirants who are not killed revert to a bestial state, hungry for raw meat and blood. During their final trial, the Test of Morkai, the Aspirant is required to make his way back to The Fang through the harsh Fenrisian wilderness, fighting the dehumanizing effects of the Helix. Those who fail to do so become entirely feral and stay in the wild, hunting future Aspirants. Those who succeed and return to the Fang are implanted with the remaining components of the gene-seed, which stabilizes the effects of the Helix. However, even after initiation into the chapter, many Wolves are never entirely free of the Curse, and risk reverting to their bestial state in moments of great stress. Part of the duties of the Wolf Priests is to watch over their brothers in battle, and remind them of their better instincts when they are in danger of succumbing to the Curse. 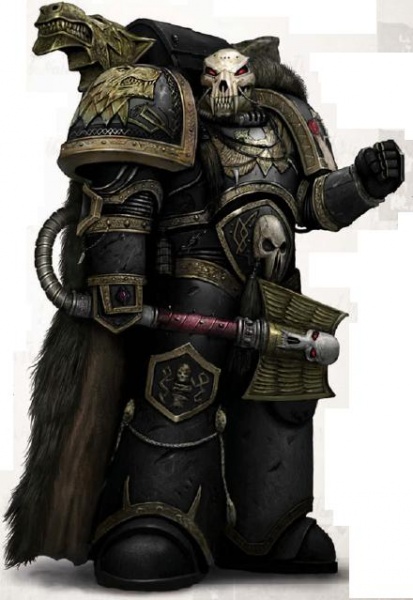 The Wulfen supposedly take their name from Wulfen, a chieftain of Fenris who was the first to accept Leman Russ‘s offer to become a transhuman Space Marine, but because of his secret ambition and jealousy of Russ, the geneseed turned him into a vicious monster instead. Despite the general belief that Wulfen were entirely bestial and thus irredeemable, there were rare cases where Wolf brothers could be reasoned with and brought under control.

In late M41, the Wolves’ arch-rivals, the Thousand Sons Chaos Space Marines, conducted a ritual using relics stolen from the chapter, including the sacred Spear of Russ and the gene-seed of several fallen Wolves. With these, the Sorcerer Madox planned to generate an interstellar field that would transform all the Wolves into Wulfen. This ritual was stopped by Ragnar Blackmane, though not before its effects caused havoc among several of the chapter’s brothers.

The 13th Great Company was formed from the followers of Leman Russ from his days on Fenris before the coming of the Allfather, despite the warnings of the Mechanicum that they were too old to undergo the transformation. Many died in the process. As such they were known as the “Greybeards” to the rest of the Legion, while they referred to themselves as the “Wolf Brothers”. Jorin Bloodhowl, one of Russ’ original Einherjar honour guard, became the first jarl of Dekk-Tra, the 13th, which was considered the most honourable and the closest to Russ.

It was among the ranks of the Wolf Brothers that the Curse of the Wulfen first appeared, afflicting warriors in the heat of battle without any prior warning. During the Dulan Campaign, two Legionaries succumbed in quick succession – although the affliction had been seen before by Jorin and his huscarl, Bulveye. The Wolf Priest Ulbrandr Crowhame was unable to discover any physiological cause, neither was the Rune Priest Leif Hemligjaga able to detect any trace of maleficarum. Jorin resolved to keep it a secret, telling not even the primarch.

The 13th Great Company was lost during the Space Wolves’ pursuit of the Thousand Sons, following the Burning of Prospero, though the exact circumstances were considered a mystery to the Space Wolves of the 41st Millennium. One legend states that the members of the 13th Company swore to hunt their foes down until every last one of the cursed marines was slain, no matter how long it took, nor where the traitors fled. Although at the time of their disappearance, Bulveye was Jarl, in the 41st Millennium the Space Wolves believe Jorin Bloodhowl was Wolf Lord of the 13th. Several members have since claimed the title Jarl or Wolf Lord. 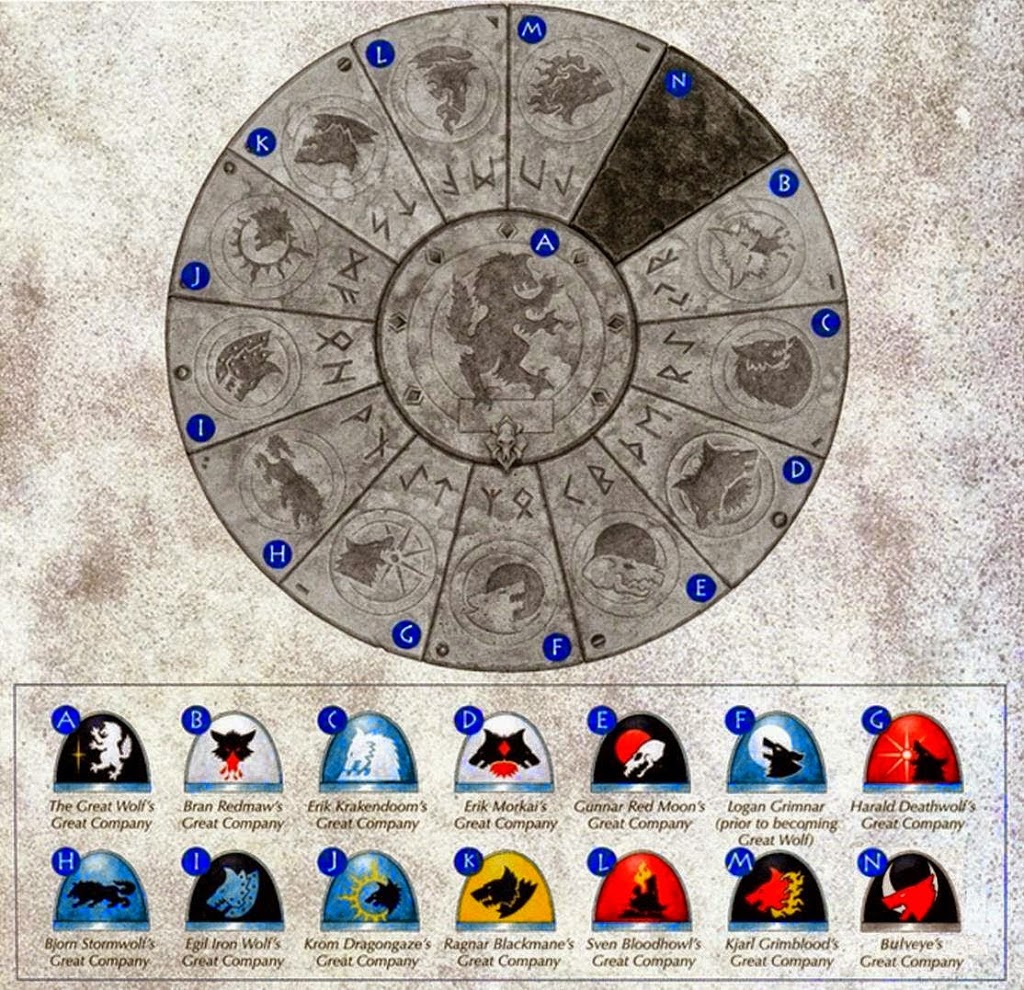 They vanished from Imperial records, and their stone on the Grand Annulus (the record of Space Wolf Great Companies in the Great Hall of the Fang), was replaced by a black slab of obsidian. Since then, the subject of the 13th Company has become taboo among the Space Wolves, and it is forbidden to speak of them except in whispers. Before their disappearance, their totem was the sign of the Wulfen, but no Great Company has used that badge since the Heresy 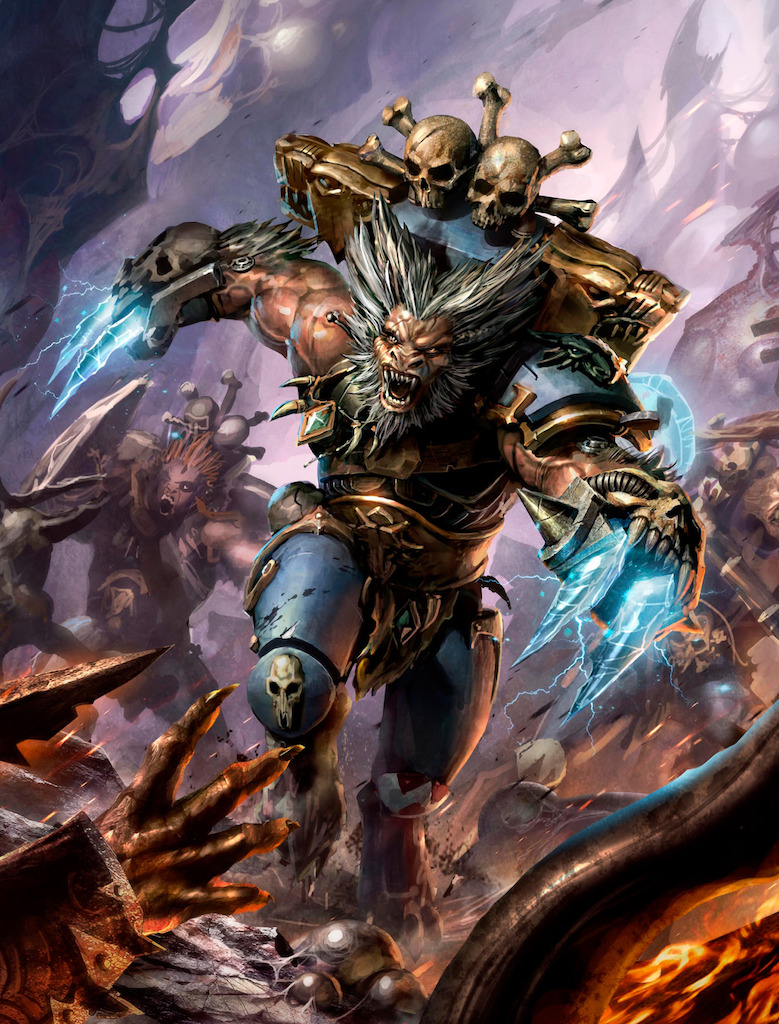 The Wulfen openly returned to the Imperium in the closing years of the 41st Millennium, rescuing Harald Deathwolf and his forces from a Chaos ambush during the Battle of Nurades. In the aftermath of the battle, the Wulfen were brought before Great Wolf Logan Grimnar and Wolf Priest Ulrik. Ulrik proclaimed that the return of the Wulfen was an omen that Leman Russ‘ return was imminent. A fierce debate over the future of the Chapter and what to do with the Wulfen erupted. Ultimately, Ragnar Blackmane proclaimed that the Wulfen must be gathered and brought to Fenris before they were found by the Inquisition or other Imperial authorities. Thus the Great Companies of the Space Wolves set off to gather the Wulfen, which were now being spotted near Warp Storms, in the hopes they could lead them to the Space Wolves’ lost Primarch.

Worryingly, it appears that close proximity to or contact with one of the Wulfen may now be sufficient to infect their uncorrupted brethren, thus meaning the “Curse of the Wulfen” has become contagious. The Wolf High Priest Ulrik had hoped that the Primaris could be the key to a cure for the affliction, however, recent events at Smelter’s Heap have confirmed that these new Brothers are also succeptible to the Curse. 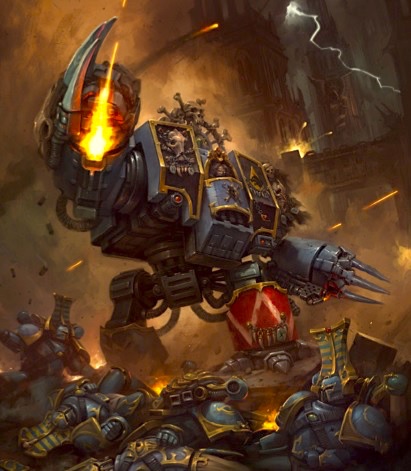 Wulfen Dreadnoughts are Dreadnoughts in the Space Wolves Chapter that have fallen to the curse of the Wulfen.

Wulfen Dreadnoughts are created when the Canis Helix of an entombed Dreadnought mutates unexpectedly, creating a drastic mutation known as the Curse of the Wulfen. Sometimes the process distorts their crippled body as well as their mind, causing Iron Priests to refit the machine to better reflect its new condition. While some Dreadnoughts are mechanical and cold, Wulfen Dreadnoughts howl, twitch and spasm like a crazed animal, as their machine spirits are provoked by the Wulfen’s fury. Now consumed with a singular predatory instinct, Wulfen Dreadnoughts seek only to maul and eviscerate their enemies, until the metallic beast is eventually stared down by their Wolf Lord. Because of this, their typical weaponry is replaced with close-range weapons such as Fenrisian axes and great Wolf Claws. Some Wulfen bear a Blizzard Shield, its powerful forcefields allowing them to weather even more punishment as they plunge into battle. 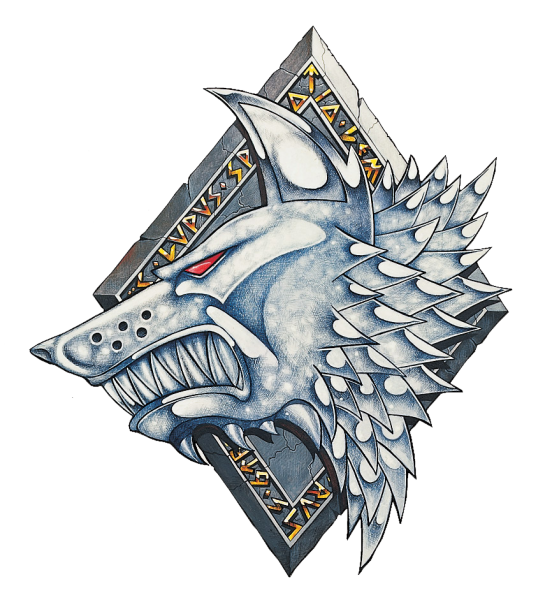 Learn More of the Space Wolves