Warhammer 40K: Light Of The Emperor’s Children – Lucius The Soulthief 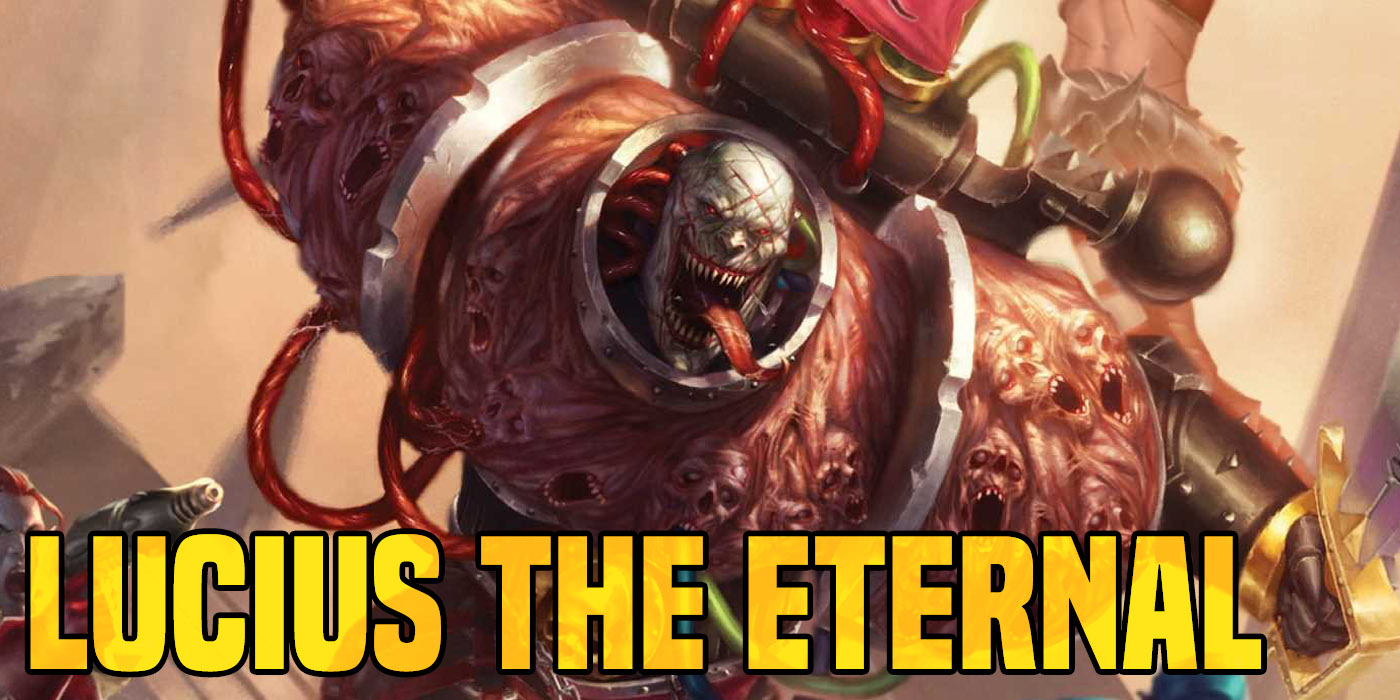 Today Lormeasters we learn of the craven swordsman who has fallen so far, even he may not remember the light – Lucius the Eternal of the Emperor’s Children.

Lucius the Eternal of the Emperor’s Children is the Champion of Slaanesh. Lucius is also known as The Soulthief, Fulgrim’s Champion, and the Scion of Chemos. He fought amongst members of Squad Nasicae during the reconquest of Istvaan III, who went on to become his bodyguard and eventual warband. 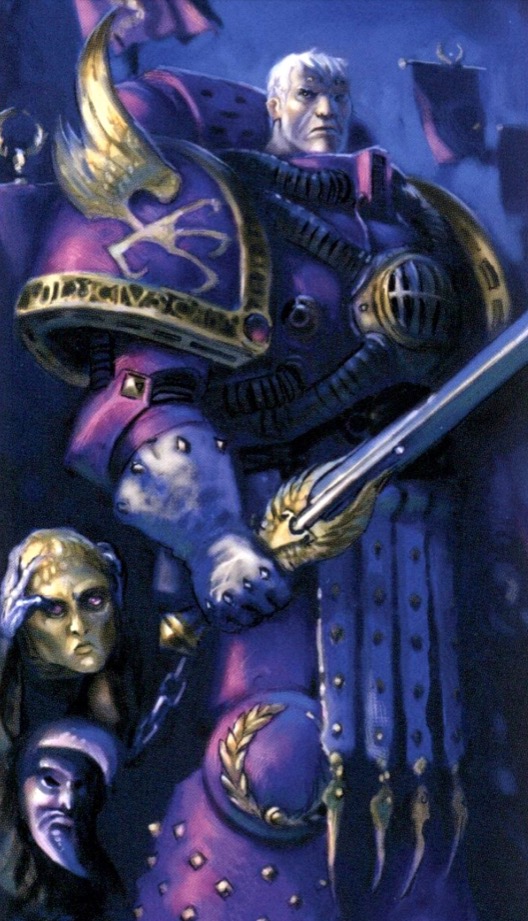 During his youth on Chemos, Lucius became noted for his talent and ability to master nearly any talent. He quickly gained sponsors among the elites of the planet and he gravitated towards the art of war, most notably swordsmanship. He displayed perhaps sadistic tendencies early on, killing individuals he claimed were beggars and brigands that had attacked him first. He proved to be a poor teacher, often scarring his pupils or cutting off an eye or finger in an “accident”. When he took part in an annual swordsmanship contest on Chemos, Lucius garnered the attention of a hulking stranger in the shadows. He dueled against a famed champion twice his age, and after suffering a blow to his stomach, took apart his opponent piece by piece. As he was about to be attacked by the champion’s supporters and disciples, Lucius was saved by a Sergeant of the Emperor’s Children, who inducted him into the Legion.

During the Great Crusade, Lucius was the Captain of the 13th Company of the III Legion. His skill with a blade quickly became legendary among the Legion. Other members of the Emperor’s Children considered Lucius to be proud, foolhardy and sometimes a little childish. Even his closest friend in the Legion, Saul Tarvitz, was wary of him. He was never bested in swordplay; the only duel he is known to have lost was against Captain Garviel Loken of the Luna Wolves, who brought him down with a punch. In a later rematch, however, Lucius was victorious. 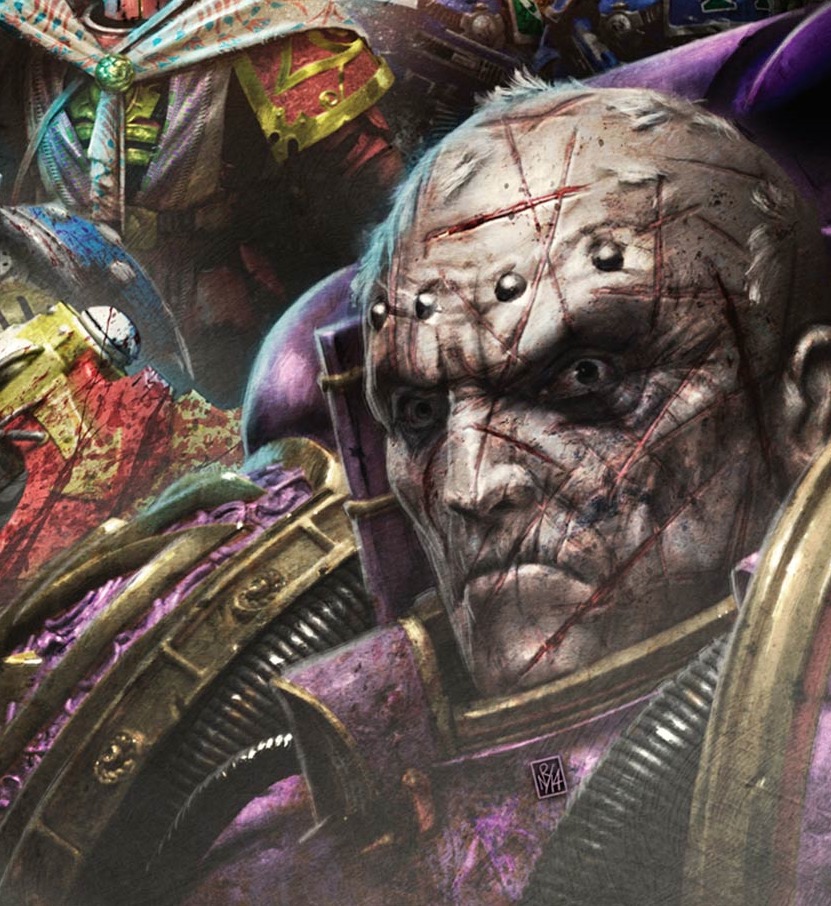 In the betrayal of Isstvan III Lucius found himself betrayed by the Legion he loved, and found himself fighting alongside Saul Tarvitz with the loyalist marines of the Emperor’s Children. As it became apparent that it was Tarvitz who was the hero of the hour for the loyalists, Lucius grew jealous and betrayed his one time friend to the traitor legions as his hunger for glory overcame his already dwindled sense of honour. He did this by attacking a group of thirty loyal marines who were assigned to him. He however did not do this alone. While fighting his own men, Captain Solomon Demeter arrived at Lucius’s position. Lucius cried out for help and thus duped Captain Demeter to think the marines Lucius was fighting were traitors. Unfortunately Demeter realized this after the last of the thirty marines were killed. Lucius and Demeter, who had a mutual dislike toward each other, became locked in combat during which Lucius killed the already wounded Demeter.

After his betrayal of the loyalists, his combat skills were recognized and he quickly became the leader of Fulgrim‘s bodyguard of Assault Marines, gaining the rank of Lord Commander. He later was troubled by dreams that made him convinced that Fulgrim was possessed by some entity, and led other top-ranking members of the Legion including Fabius Bile and Marius Vairosean in the capture of the Primarch. After ineffective torture and an attempted exorcism, Lucius came to understand that while Fulgrim had been possessed he had gotten rid of the Daemon himself.

Lucius followed his primarch on his quest for the “Angel Exterminatus.” Lucius twice crossed swords with Nykona Sharrowkyn of the Raven Guard; the first time Lucius came away with a scar on one cheek, the second time, on Iydris, Sharrowkin gave him a matching scar and then killed him with two blades through his hearts. Lucius died on Iydris and awakened in Fabius‘s apothecarion, amazed to be alive. 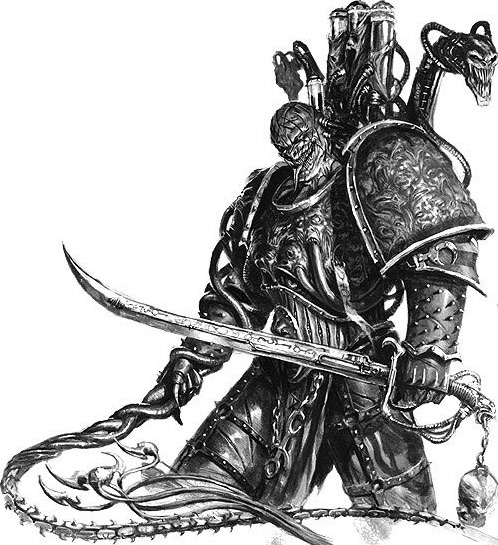 After the events on Iydris, Lucius set out alone in search for a worthy challenge. He crossed paths with Hathor Maat of the Thousand Sons, who he despised for being so alike to a younger Lucius. Maat told Lucius of Sanakht, a peerless swordsman of the Thousand Sons, and his tower on the Planet of Sorcerers. Lucius, still enraged by his defeat at the hands of Nykona Sharrowkyn, set out to challenge Sanakht to a duel. Learning that none of the Thousand Sons’ Corvidae seers were able to prophesize Sanakht’s eventual defeat in combat only served to feed Lucius’s ambition.

After a longwinded journey, Lucius reached Sanakht’s tower. The swordsman welcomed Lucius’s challenge. Sure of his own victory, Sanakht asked Lucius if he was eager to die, to which Lucius replied that he has already experienced death once. Sanakht accurately claims that Lucius sought him out to understand why he came back from the dead. As Lucius unleashes his full fury upon Sanakht, he eventually managed to overwhelm the Thousand Son, disarming him. Before he could deal the killing blow, however, Ahzek Ahriman steps in to halt Lucius’s blade with a psychic barrier, stating that he would shield Sanakht even though the Thousand Son himself would not have, stating he would soon have need of Sanakht.

Lucius accompanied Ahriman on his quest to retrieve the Iron Oculus for the sole purpose of waiting for an opportunity to battle Sanakht. Lacking a proper moment, he stayed part of Ahriman’s group during the subsequent search for the Shards of Magnus, his facial scars healed by Hathor Maat. Lucius was part of the Thousand Sons search for the Shards of Magnus on Kamiti Sona and con the station came to battle Yasu Nagasena. Lucius was able to best the skilled but non-augmented swordsman and casually threw him from a causeway, but the human survived. Afterwards Lucius continued to accompany Ahriman’s cabal, falling under the sway of the Daemon inside the Iron Oculus and manipulating Hathor Maat into changing the Book of Magnus at the creatures behest. On Nikaea, the Thousand Sons and their Imperial enemies both became trapped within a Crystal Labyrinth summoned by the possessed Lemuel Gaumon. Inside the Labyrinth Lucius was confronted by the forms of Sanakht, Garviel Loken, and Nykona Sharrowkyn, defeating them all but becoming enraged when he saw a reflection of his previous uncorrupted self. Lucius was swallowed by the Crystal Maze.

Somehow, Lucius was able to escape the Crystal Maze. When Fulgrim was forced by Lorgar to rejoin the traitor war effort, the Primarch let out a great cry across the Warp ordering the Emperor’s Children to return to his side in preparation for the Siege of Terra. Lucius was seen hearing the call on Netis, surrounded by scattered limbs. 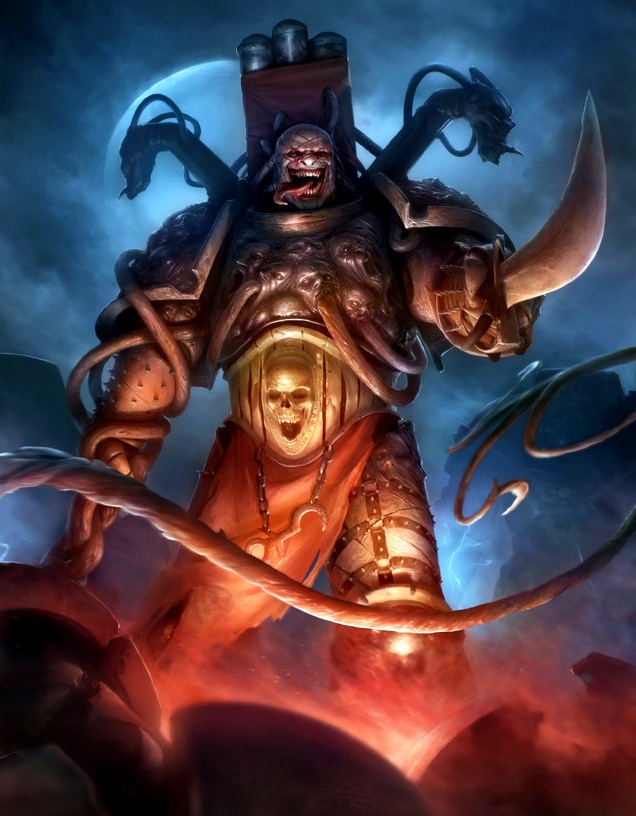 Lucius continued to hone and better his combat skills after the Emperor’s Children began to worship Slaanesh. Fulgrim organized gladiatorial games on their home planet whenever the Legion was unable to vent its need for the pleasure of the kill on other worlds, and Lucius was undefeated in these, an unstoppable force, until he fought Lord Commander Cyrius. Lucius died, and his death was an experience of such transcendent pleasure that Slaanesh himself took notice: he could not let such a promising marine slip away. In the following days, Cyrius began to change: lines began to appear over his skin and his hair started to fall out. Lucius was back in the world of the living, and all that remained of Cyrius was a screaming face in the warped artificer armour. This has happened many times since then: whenever his killer takes even the tiniest moment of enthusiasm, pleasure, or satisfaction from besting Lucius, they will begin to change into him and become just another swirling face, a memory in the armor in which Lucius is clad. Not even the mechanical Necrons are immune from this curse, as the Phasing Sword has learned. After every “death” Lucius is reborn again, as arrogant and maniacal as ever and immediately looking for a new challenge to fight.

Through the course of thousands years Lucius hunted down and eliminated a lot of great duelist. He defeats the Emperor’s Champion of the Black Templars at Veilfate, the Dark EldarArchon Vraesque in cursed Shaa-dom and the Ork Warboss Two-klaws at Octarius Sigma.

Lucius led the Cohors_Nasicae his former bodyguard during the Horus Heresy and now a warband under his command, until its remnants were merged into a greater Warband known as the Faultless.

Lucius would later appear at the head of an army of Emperor’s Children during the 13th Black Crusade of Abaddon the Despoiler, inflicting untold suffering on the Imperial world of Belisar.

Lucius is armed with the Lash of Torment, a daemon-infested whip, as well as the ornate sword known as the Blade of the Laer. His Armour of Shrieking Souls, powered by the thousands of souls now trapped in it, offers him unnatural protection and allows him to discharge the cacophony generated by the tormented souls as a devastating sonic attack. To further augment his superhuman abilities, Lucius carries a Combat Stimulant rack on his back designed by the Dark Eldar. He won the device after emerging as a champion in the gladiatorial arenas of Commorragh.

Learn More of the Emperor’s Children

~ The real question, is who can finally put down the Soulthief without a trace of satisfaction?