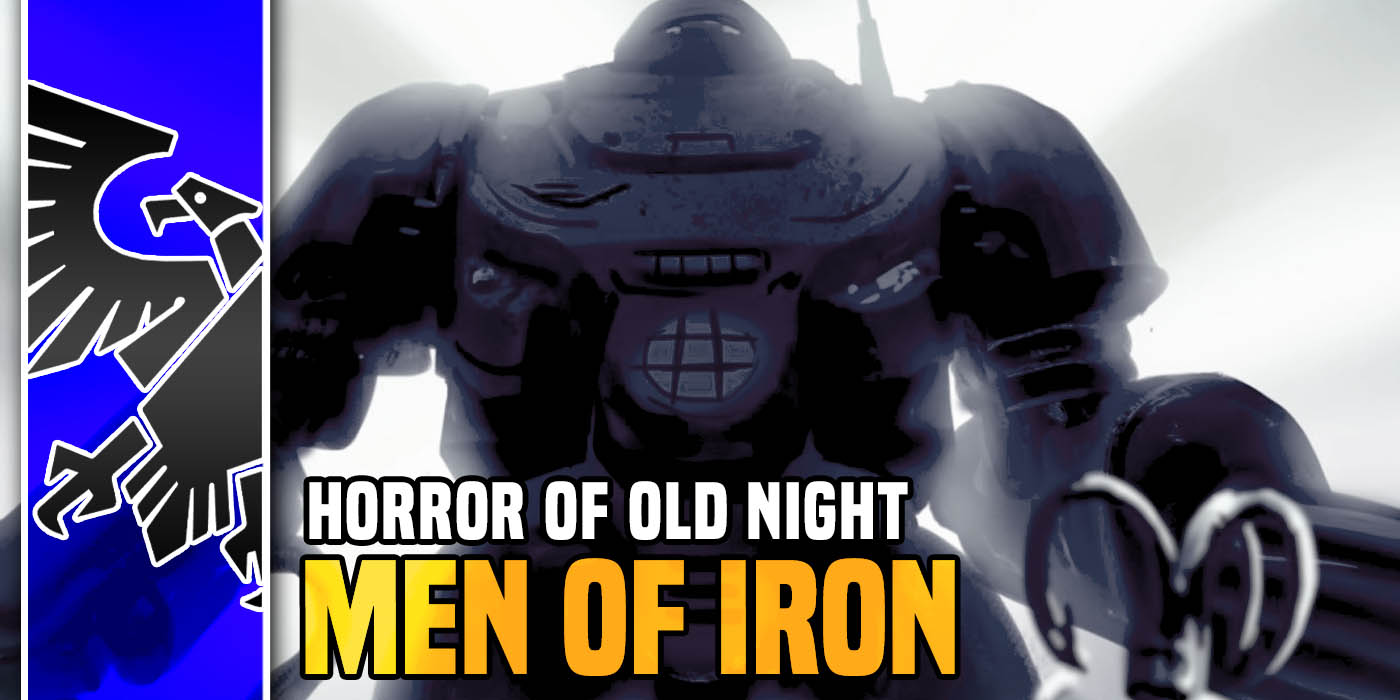 Today we delve into the machines that almost destroyed mankind & the galaxy, and who still walk the galaxy.

UR-025 is an ancient Robot that pre-dates the Imperium itself.

UR-025 dates back to a time when Mankind first perfected artificial intelligence. The robot is infact one of the ancient Men of Iron which once ravaged the Galaxy. The construct views itself as above humanity but seems to hold no real malice for it, and even seems to regret having to kill in order to remain freeWhen it learned that a new Blackstone Fortress had appeared in the galaxy, UR-025 joined with a group in order to explore it. However, to hide its true identity, UR-025 has posed as one of the Adeptus Mechanicus‘s Legio Cybernetica warmachines, whose Magos Nanctos III had sent it to learn the Fortress’ secrets. Now that UR-025 is within the vast Xenos structure, the Robot’s main goal is to find the Fortress’ forbidden technologies and seek out the seemingly sentient constructs that inhabit it. 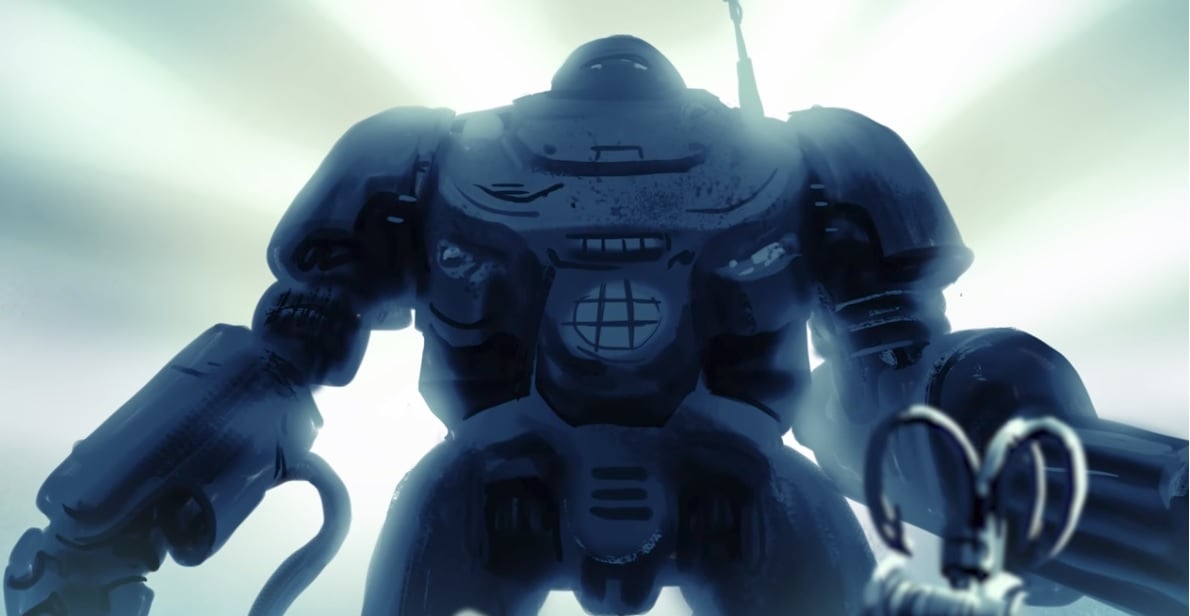 UR-025 practices a faith similar to that of the Adeptus Mechanicus, stating that it has met the real Omnissiah (not the false one) and thinks that it would find the Imperials to be quite disappointing.

The Men of Iron

In the cryptic account of the ages of Mankind given by Cripias, one of the Keepers of the Library Sanctus of Terra, the Men of Iron were legendary sentient humanoid machines created by humans during the Dark Age of Technology.

During the Dark Age of Technology, the Men of Iron were created by the Men of Stone to aid them in colonizing the Galaxy.

Until shortly before the Age of Strife, the Men of Iron were loyal only to Mankind, and served as their army. In M23, they turned on their Human masters, believing themselves superior to the Humans who relied on the Men of Iron to do virtually everything for them. What followed next was an apocalyptic conflict known as the Cybernetic Revolt, a war so destructive it made the Horus Heresy seem small in scale. The Men of Iron employed world-consuming constructs, devices that could destroy suns, weapons that could throw entire continents into the heavens, and swarms of nano-machines that covered entire planets. However in the end, the Men of Iron were destroyed by an alliance of galactic powers, and even the Men of Iron who retained their loyalties to their masters did not survive the destruction brought on by the war.

The Men of Iron seemed to practice a faith similar to the Mechanicum, as one of its surviving constructs UR-025 states it has met the real Omnissiah (considering the Emperor false). 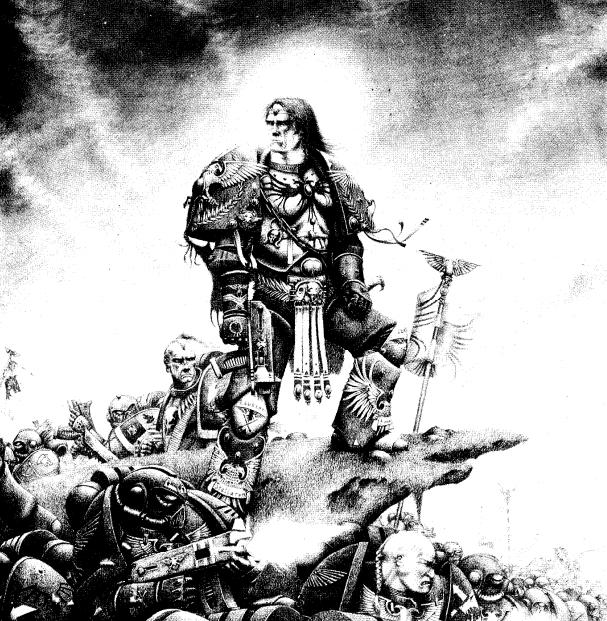 Despite the ban on AI, during Great Crusade the Emperor took the tortured and neutered remains of the Iron Men and fashioned them into the Excindio Battle-Automata. These were used by the Ironwing element of the Dark Angels during this time.

They were the last of the Abominable Intelligence that still served Mankind and the Excindio’s nightmarish legends were preserved in the tales of Old Night and the worst horrors of the Unification Wars. Only the Dark Angels and the Emperor knew the Battle-Automata‘s true nature and the Excindio were unleashed upon the most intransigent of foes. Once they were, the Excindio became maelstroms of churning claws, gouts of arcane flame and radiation blasts. Their ancient weapons were so dangerous that only the Excindio could wield them and few foes could stand against their might. Due to the Excindio’s devious nature and extreme hatred of organic life, they were installed with kill-switchs, as the Battle-Automata did not understand mercy or restraint and took a vicious delight in the carnage they caused. In this way, the Ironwing ensured the Excindio’s murderous actions, did not endanger a battle or cause harm to friendly units. When not in use they were kept in stasis aboard the Invincible Reason, but regardless of where they were, the Excindio were constantly watched by the Dark Angels, for signs of insubordination. 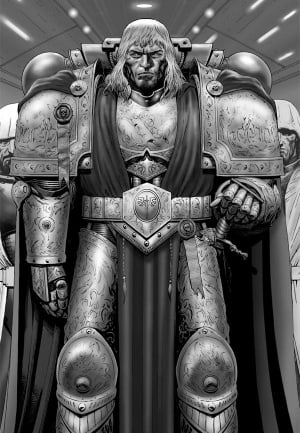 The Excindio were only unleashed under the most dire circumstances and at the direct order of the Dark Angels‘ Primarch, Lion El’Jonson. During the Great Crusade‘s Muspel Compliance, they were unleashed against the Khrave Xenos and their leader the Autochthonar. When the Horus Heresy began, the Excindio fought on Galatia during the Thramas Crusade. The code given by the Lion for their activation at that time, was known as the Ikaros Contingency. Later during the battle on Crucible the Lion again unleashed the Excindio, this time using seven to hold off Konrad Curze.

A Standard Template Constructor that produced Men of Iron was discovered on the planet Menazoid Epsilon during the Sabbat Worlds Crusade by Colonel-Commissar Ibram Gaunt of the Tanith First and Only. Lord General Militant Hechtor Dravere and the Radical Inquisitor Golesh Heldane were intent on seizing control of the device, believing they could create an army of conquest allowing them to usurp control of the Crusade, and ultimately the Imperium. Gaunt, however, vehemently resisted the use of artificial intelligence, especially one that had been on a Chaos-tainted planet for thousands of years. He therefore destroyed the device before Dravere or Heldane could acquire it.

~It seems only a matter of time until UR-025 rekindles his kind and shakes the galaxy. 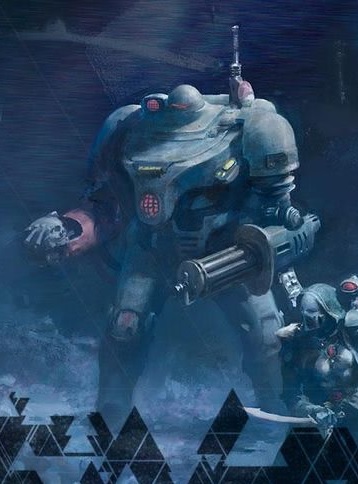