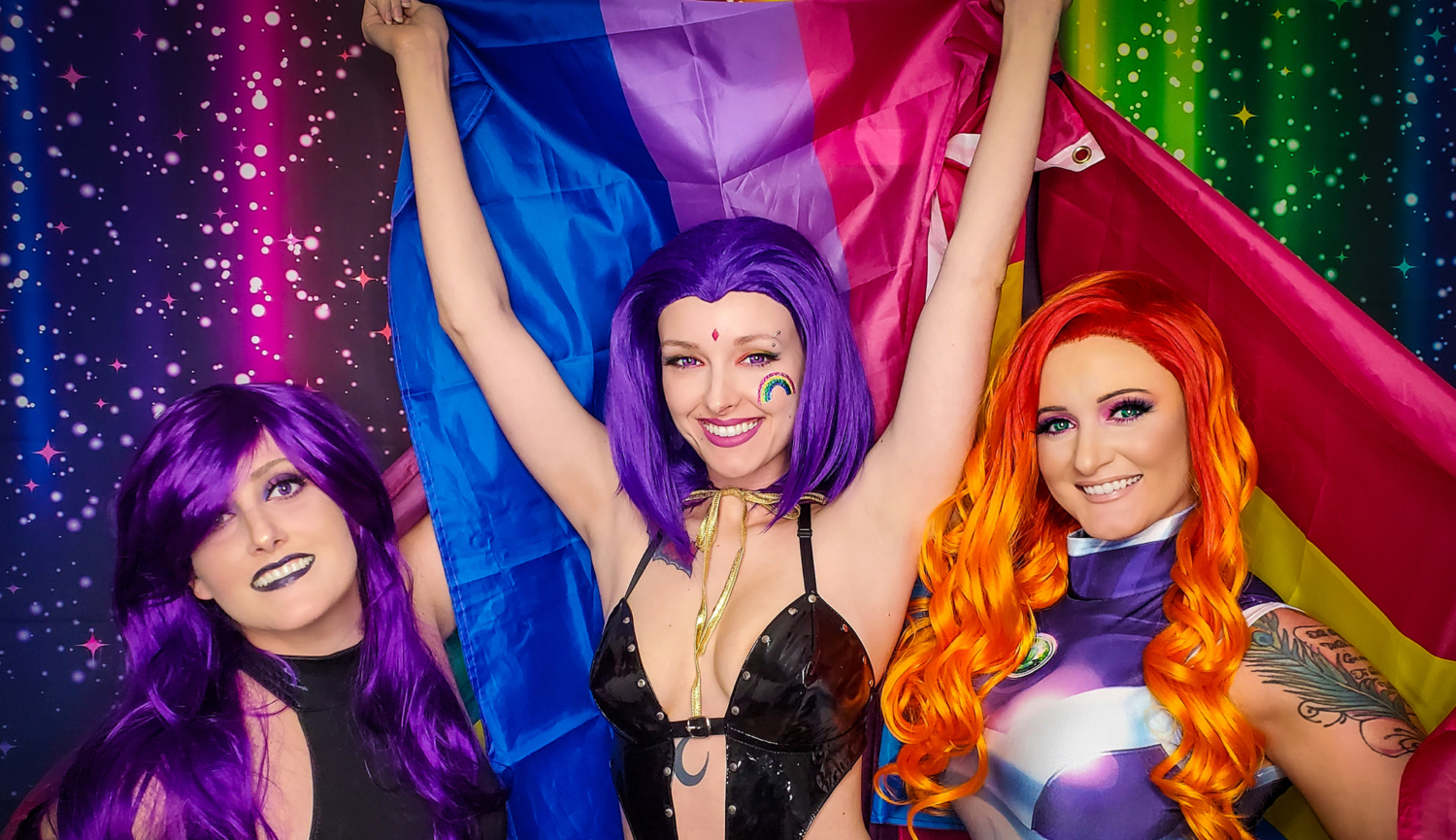 It’s that time of year again- for rainbows and glitter, and enthusiastic support and ally-ship. Lets Celebrate Pride Cosplays 2021!

Pride is celebrating it’s 51st year, HAPPY BIRTHDAY! It’s the moment of parading in the street, and loudly shouting from the rooftops that our voices matter, that we deserve to be heard, and that you will ALWAYS have support and allies on the streets of the Pride Parade. 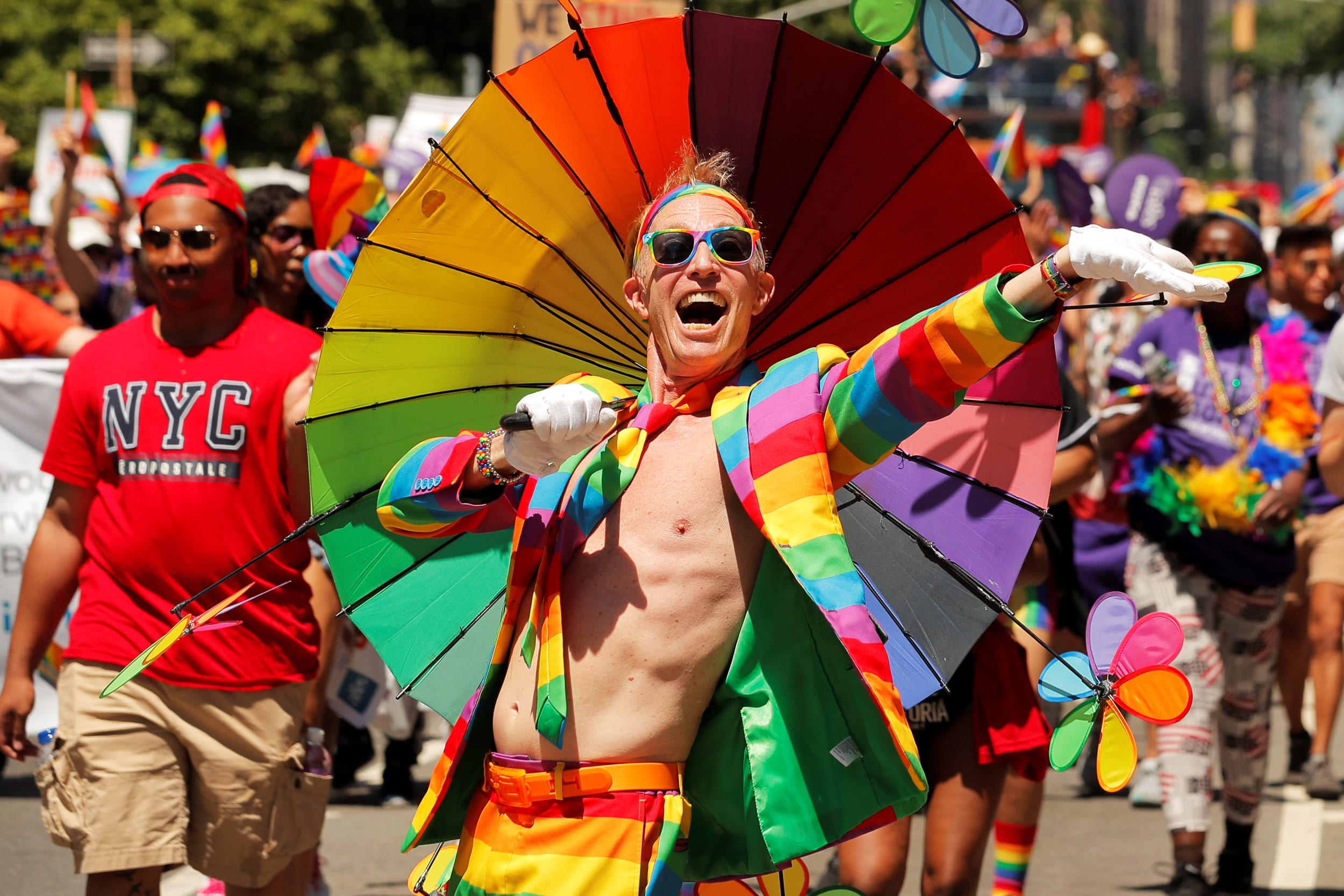 All over the world, people gather en-masse (although much smaller masses, mostly socially distanced for obvious reasons) to show their support and, well… their Pride. They revel in the freedom to be out, and gay, and fabulous. They rally to celebrate their singleness, their freedom from disease or ability to live on with it, their thriving under the most hostile of circumstances… And above all, during Pride it is important to recognize that no matter what happens, we will ALWAYS be stronger together. We will always take the time to celebrate exactly who we are. 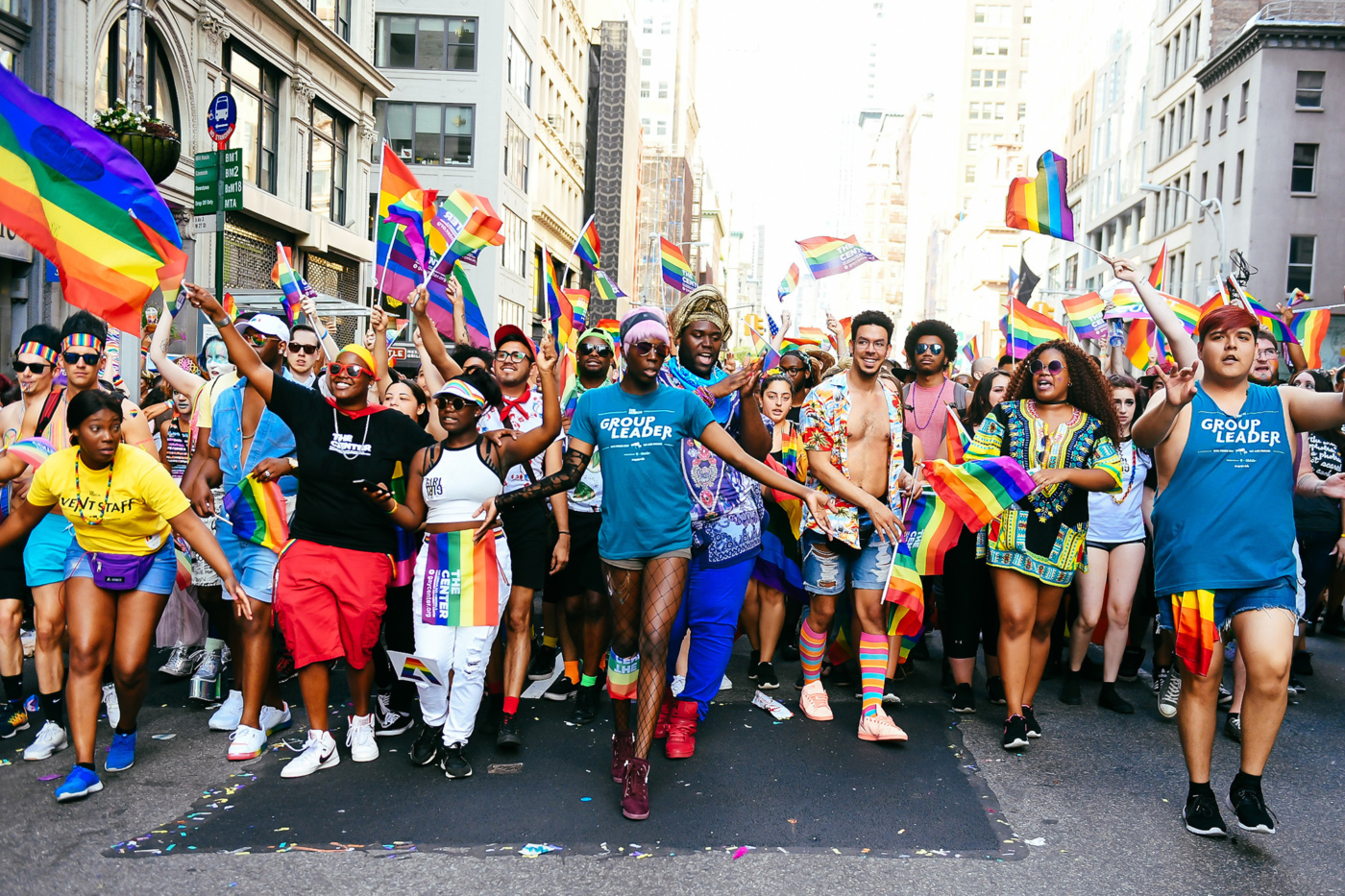 In recent years, Cosplayers have taken up the rainbow mantle, adapting their cosplays (or creating entirely new ones) to show their pride and celebrate June- Pride Month. We here at BoLs are friends and advocates of the LGBTQ+ Community, and are dedicated to showcasing diverse voices in the community. Check out our previous Pride coverage HERE!  As Pride Month 2021 draws to a close, we are celebrating some loud and fabulous Cosplay adaptations for Pride Cosplay 2021. 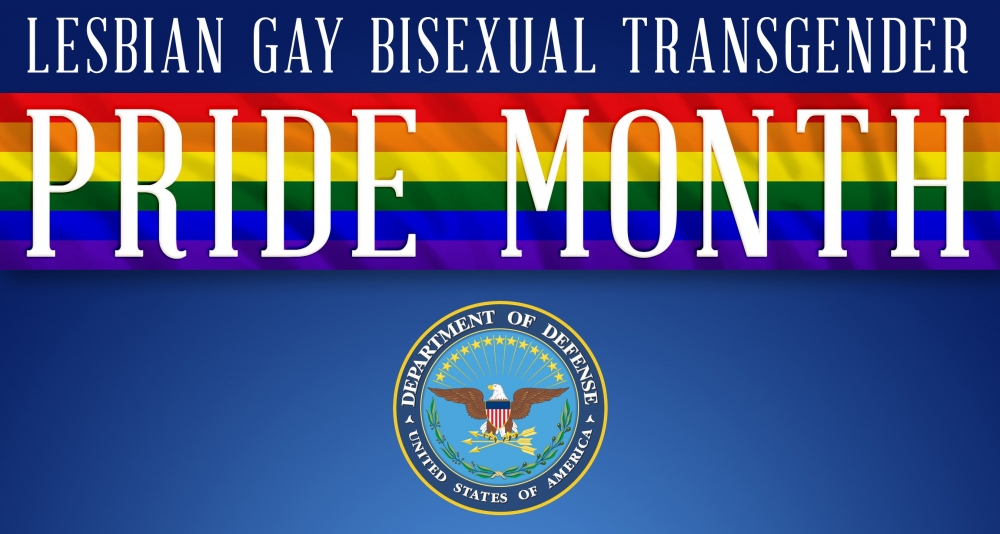 While quite a few popular media outlets cover Cosplay from time to time, it is few and far between to find websites, magazines, and other media sources who dedicate their work to Cosplay coverage. Cosplay Central is one such, and this year they featured a lovely article of some beautiful Pride Month cosplays. They have a lot to say about the importance of Pride Month, and it’s important to share the message. Props to you, Cosplay Central (and article author Lexi Ginn!) 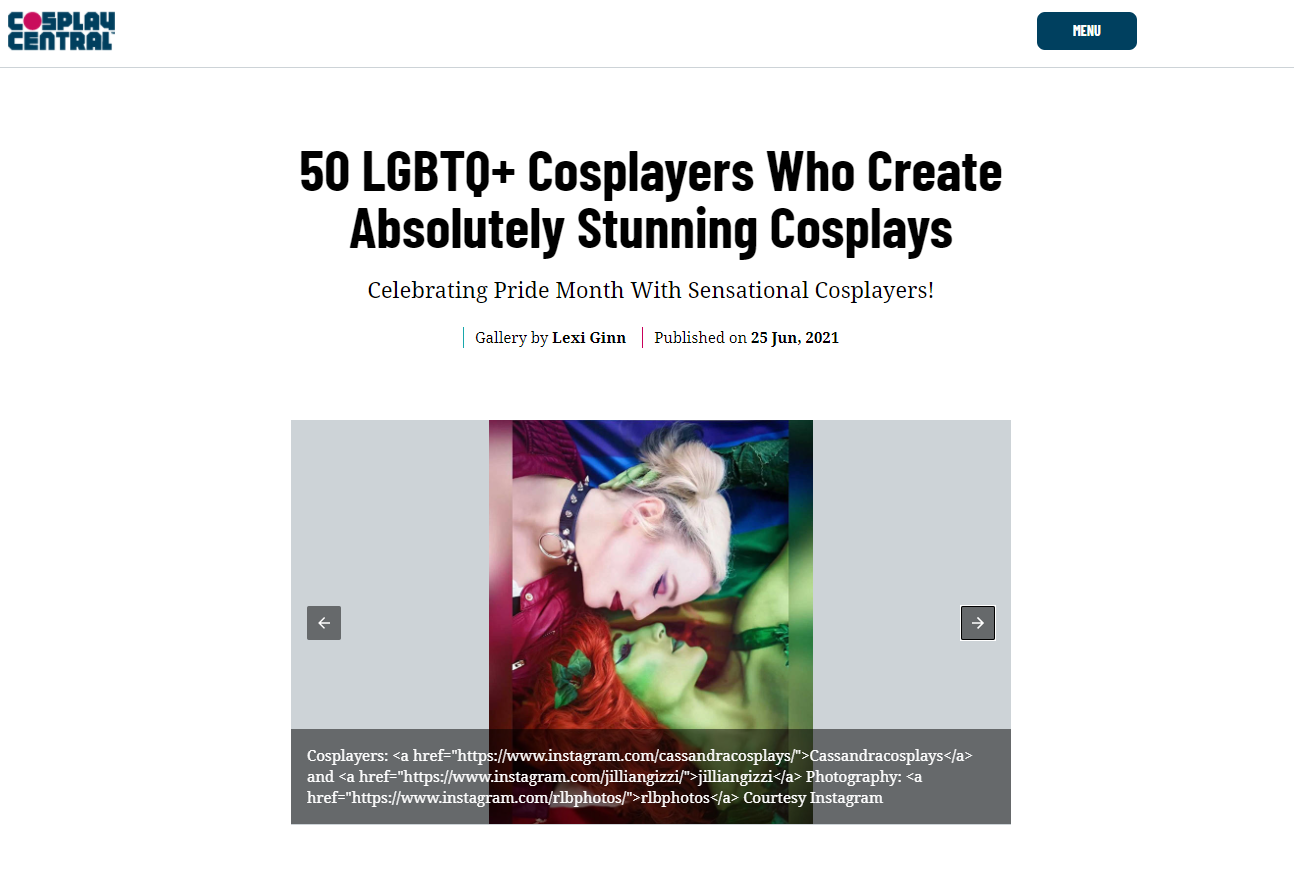 “Happy Pride month from all of us at Cosplay Central! There are so many talented LGBTQIA+ cosplayers who continually create stunning imagery, art, and cosplays for all of us to enjoy!

NYC Pride announced their theme for pride this year as “The Fight Continues”. Though the LGBTQ+ community constantly gives and gives love, they are regularly met with prejudice and blind hate. There is tremendous adversity on many fronts within this country: police brutality, an ongoing pandemic, the alarming murder rate for trans-POC, the violent efforts to disenfranchise voters, and the rights of this community being questioned at the level of the Supreme Court are just a few of the battles we are in.

The LGBTQ+ movement has also been facing tons of cruelty on social media, with certain apps allowing creators to be targeted and attacked. As a collective, we here at Cosplay Central vow to amplify empowered voices of the LGBTQ+ community and help in any way we can for the movement towards equality and acceptance.

Amidst all the animosity, LGBTQ+ Cosplayers worldwide prove that their community is brave, bright, and defiant by taking the stand in saying, “this is who I am”. If we learned one thing from Wonder Woman, it’s that love is always stronger.” -Cosplay Central 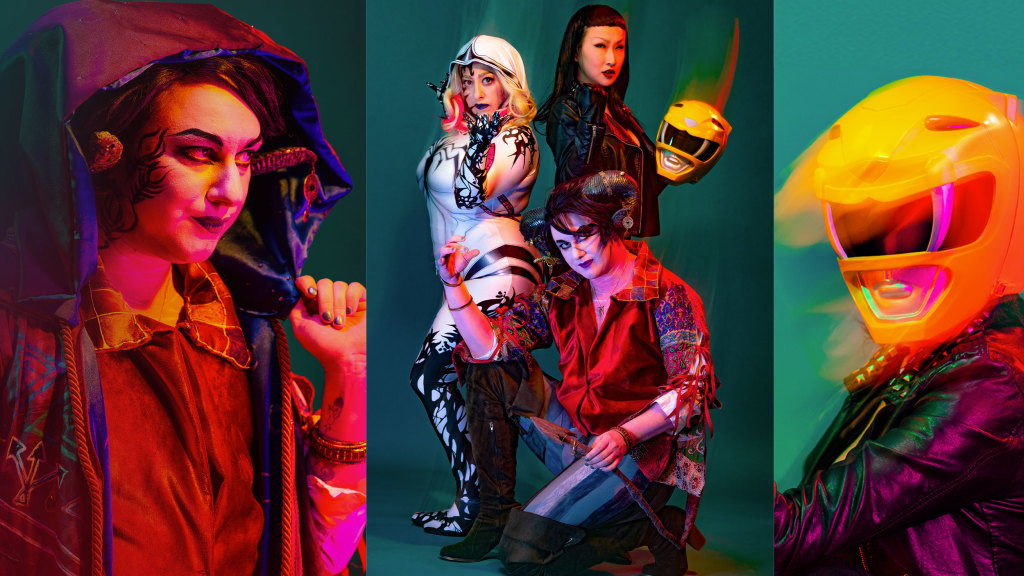 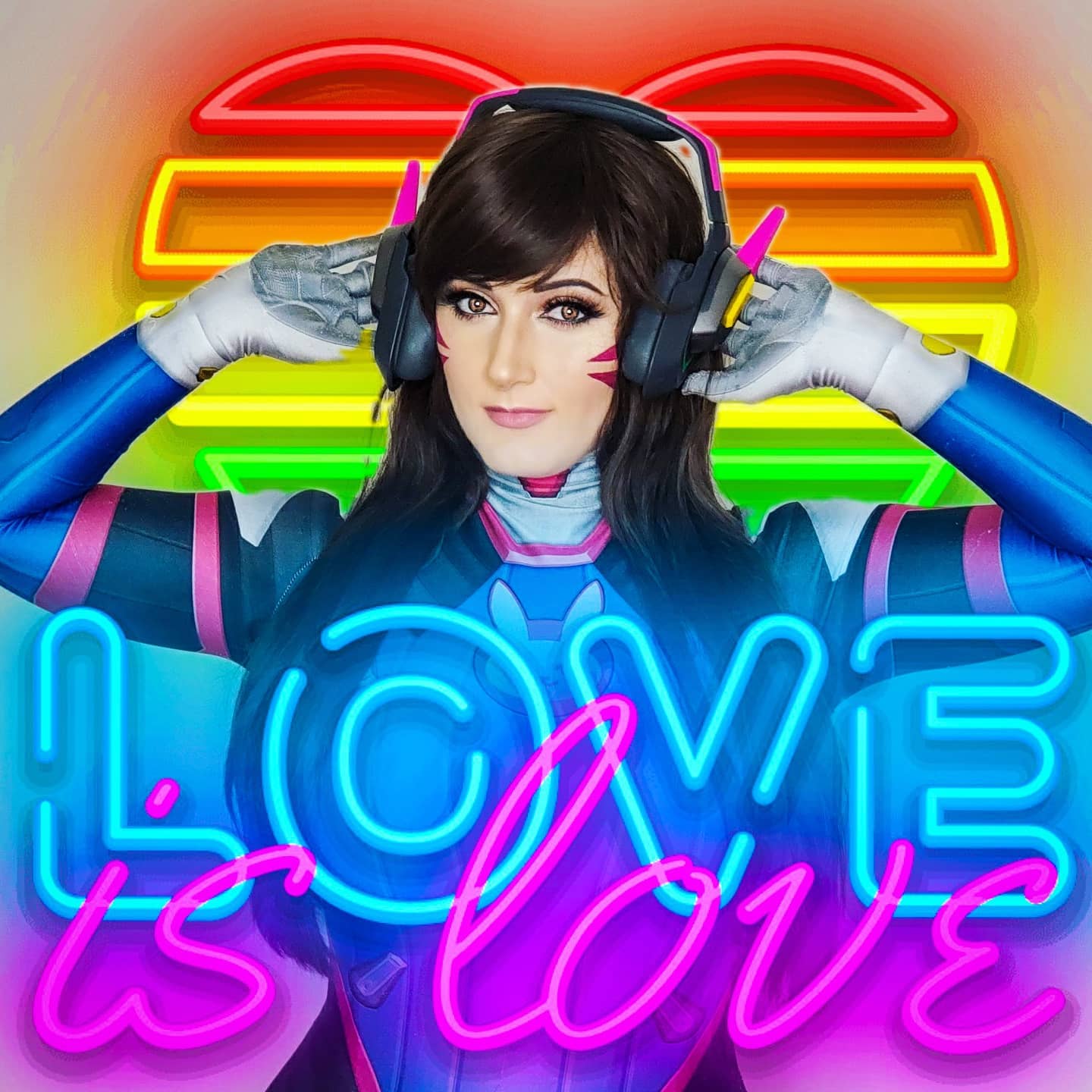 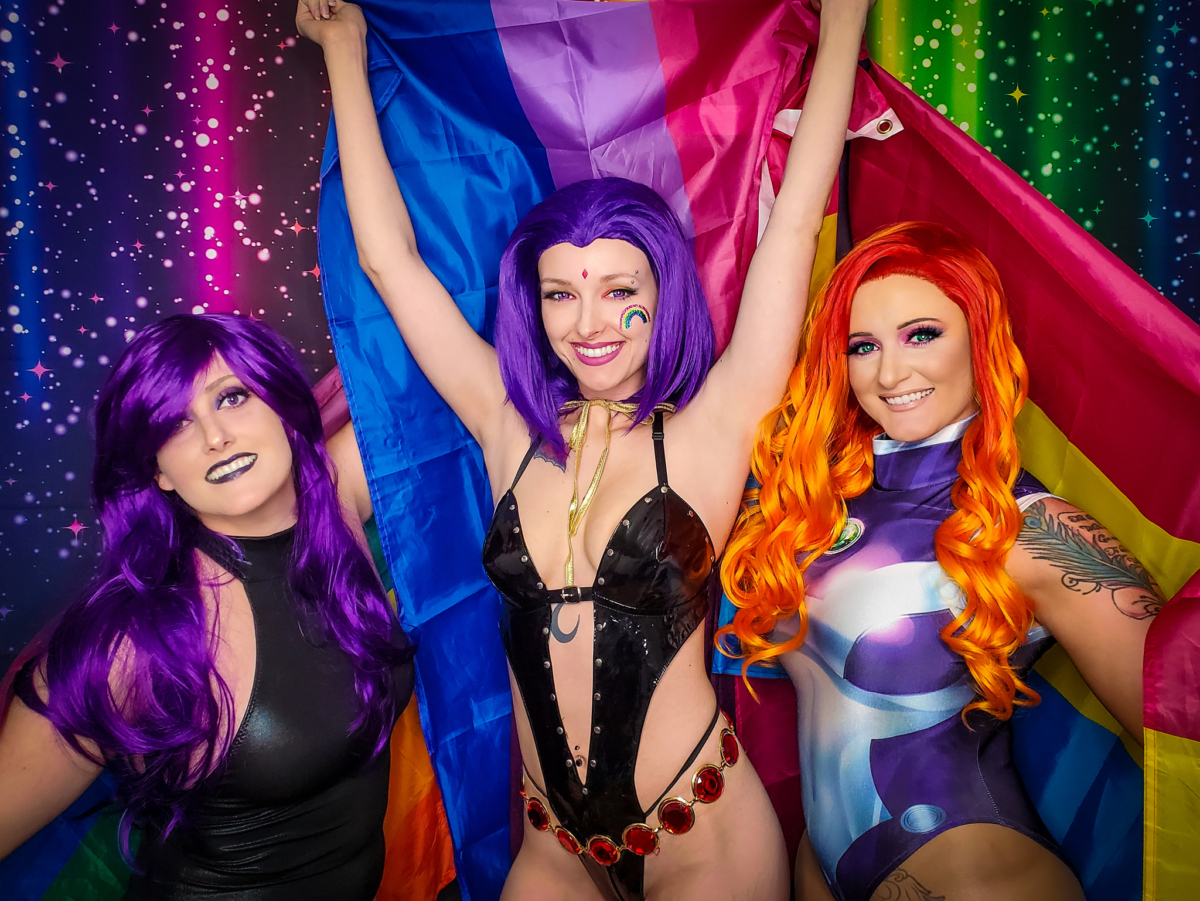 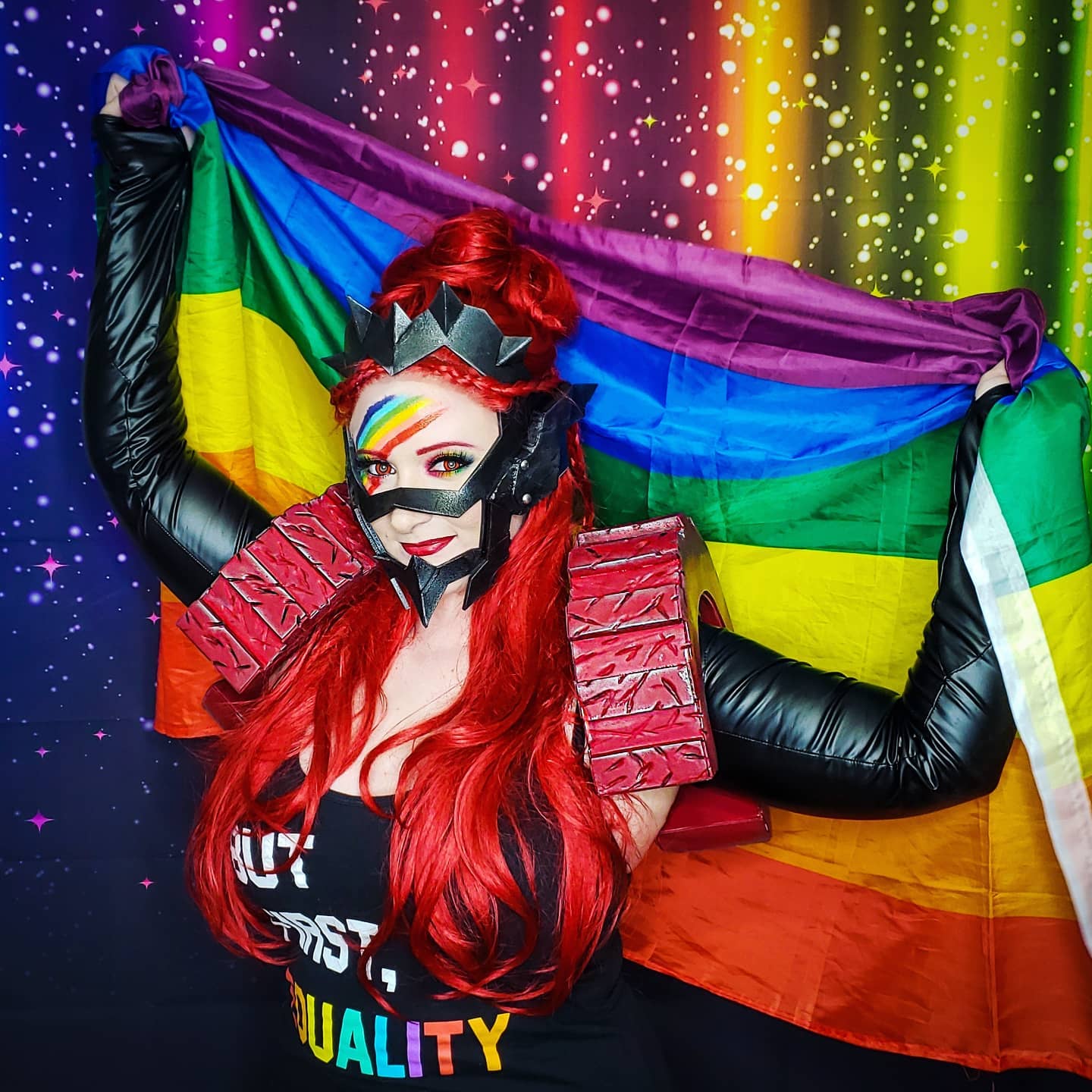 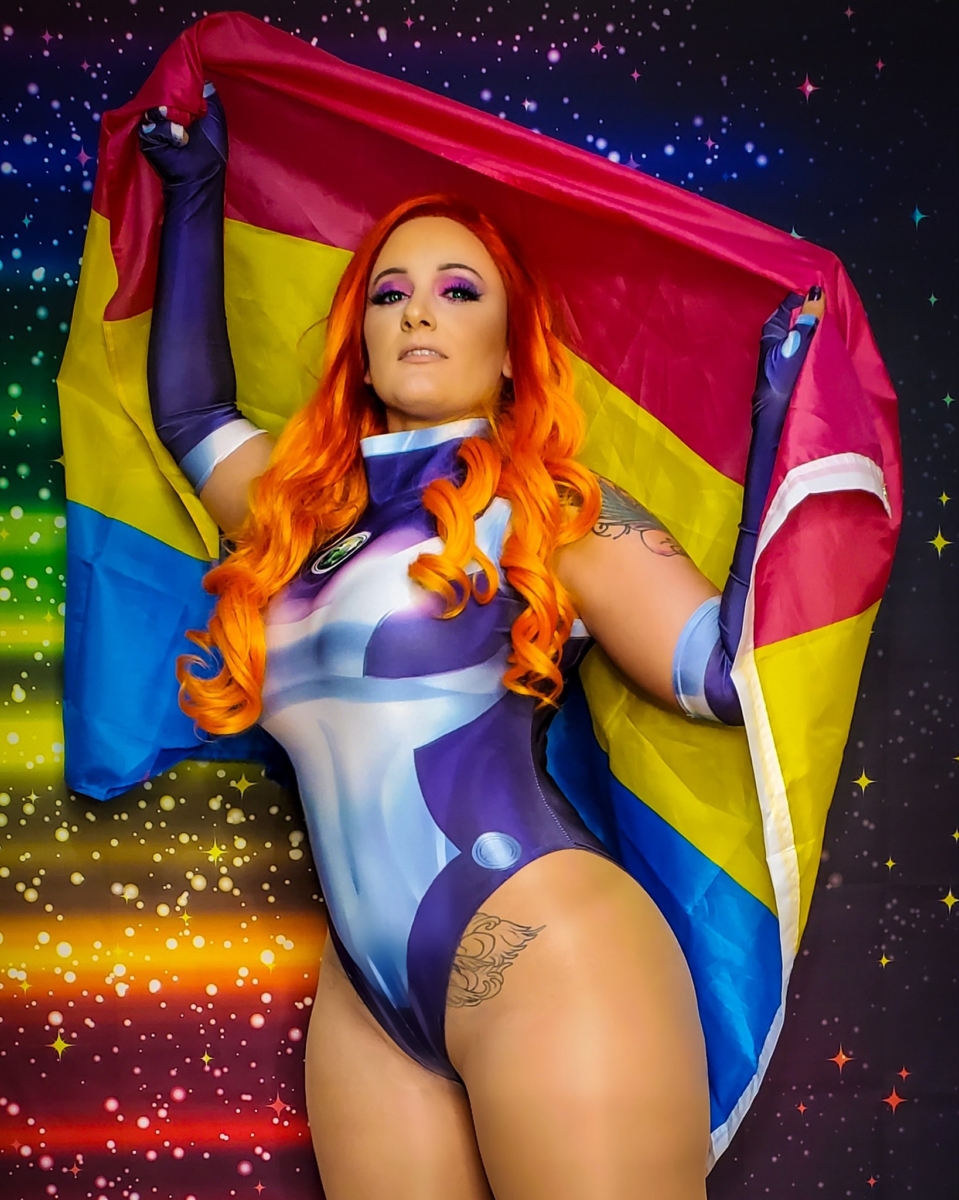 One of the most popular ways of representing Pride in Cosplay is to substitute parts of a cosplay with rainbow representation. By keeping the lines of the cosplay authentic but adding (not so subtle) touches of rainbow glory, Cosplayers can easily adapt their work in a way that is visual and fun. This Supergirl cosplay by MaedenArt is a fun and playful adaptation of the classic character- and LOOK AT THOSE AMAZING BOOTS!!! Fierce and fun. 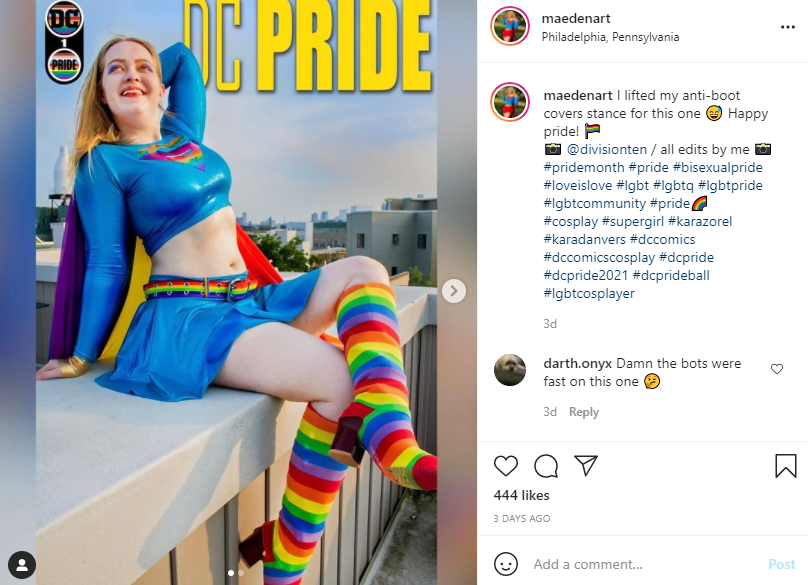 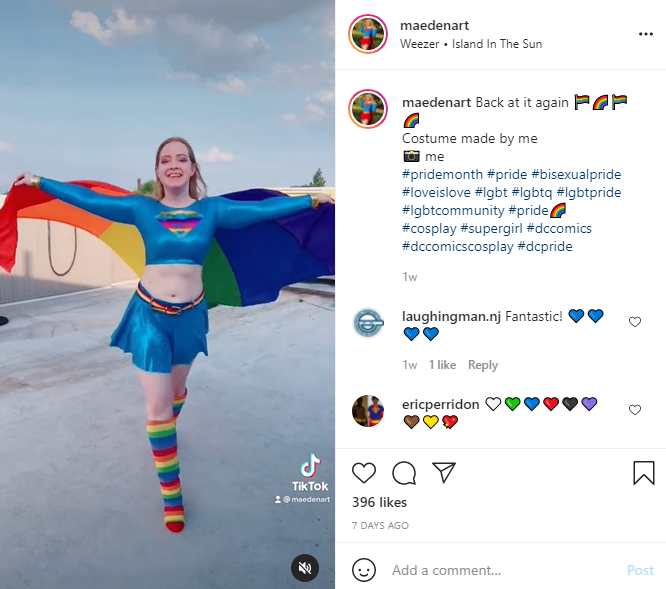 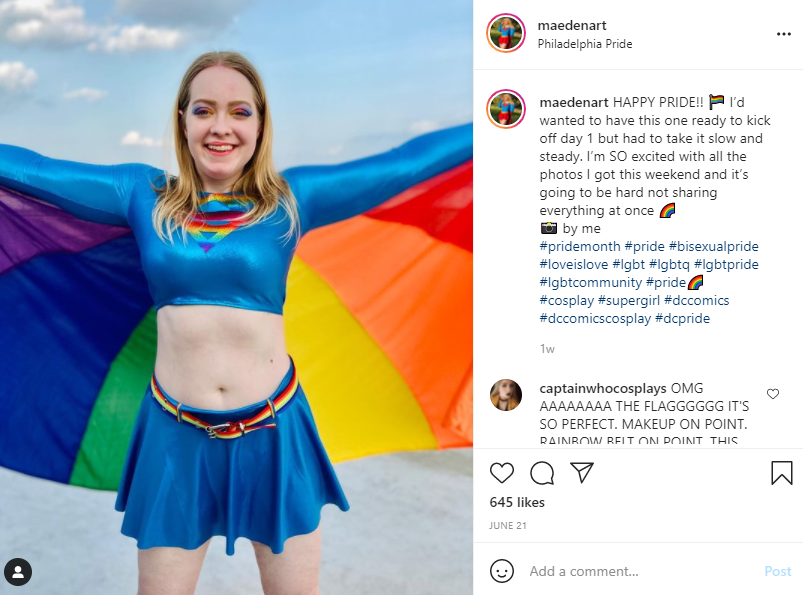 Author: Jennifer Larsen
Jennifer Lynn Larsen, aka "Mayhem's Muse" is originally from the Seattle area of Washington State, and manages Communications and the Cosplay Beat for BoLS. Her Cosplay Awards include the RTX Judge's Choice Award, and Dragon's Lair Austin's Cosplay Symposium. Jennifer has been a Cosplay Guest Judge at RTX, Tacticon and Genghis Con in Colorado. Her cosplay work has also been featured in Girls Who Love Monsters, Geek Fuel, Renaissance Magazine and other publications. Jennifer has modeled in the Her Universe Fashion Show, Precision Camera's yearly Precision Camera University, and has taught several workshops for photographers about partnering with cosplayers and creative muses/models. For BoLS, Jennifer covers everything from video games, fantasy, comic books, to sci-fi and historical garb. She is a lifelong enthusiast of retro video games and loves Dungeons & Dragons, urban fantasy, tabletop games, VR technology, and historical archery. Jennifer has set several National Records through USA Archery’s Traditional Division for Asiatic Bows, and earned 4th Place in the World Nomad Games in Kyrgyzstan in 2018 for Women’s Korean Archery. She is currently studying at Denver University for her Masters Degree in Organizational Leadership.
Advertisement
Cosplay Pop Culture
Advertisement 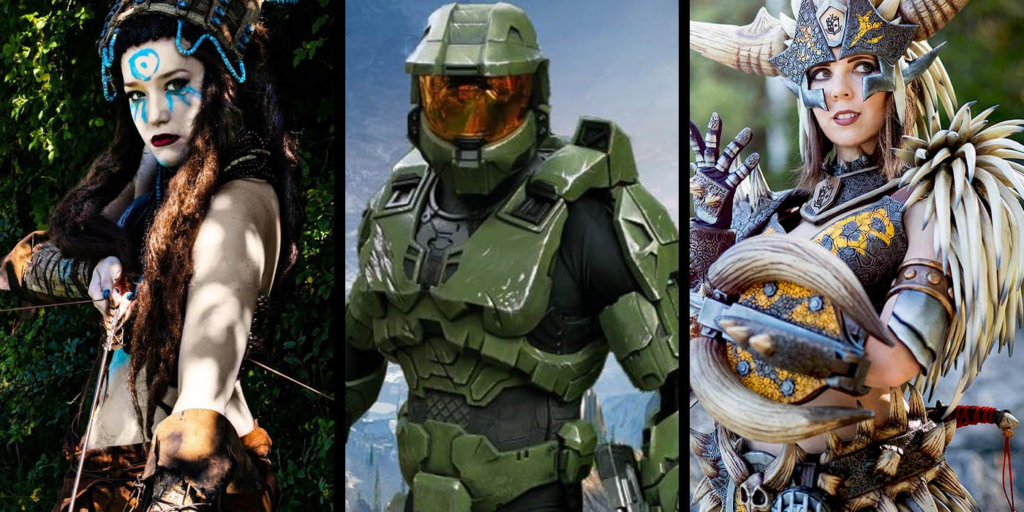