Warhammer 40K: Gaunt’s Ghosts – The Tanith First and Only 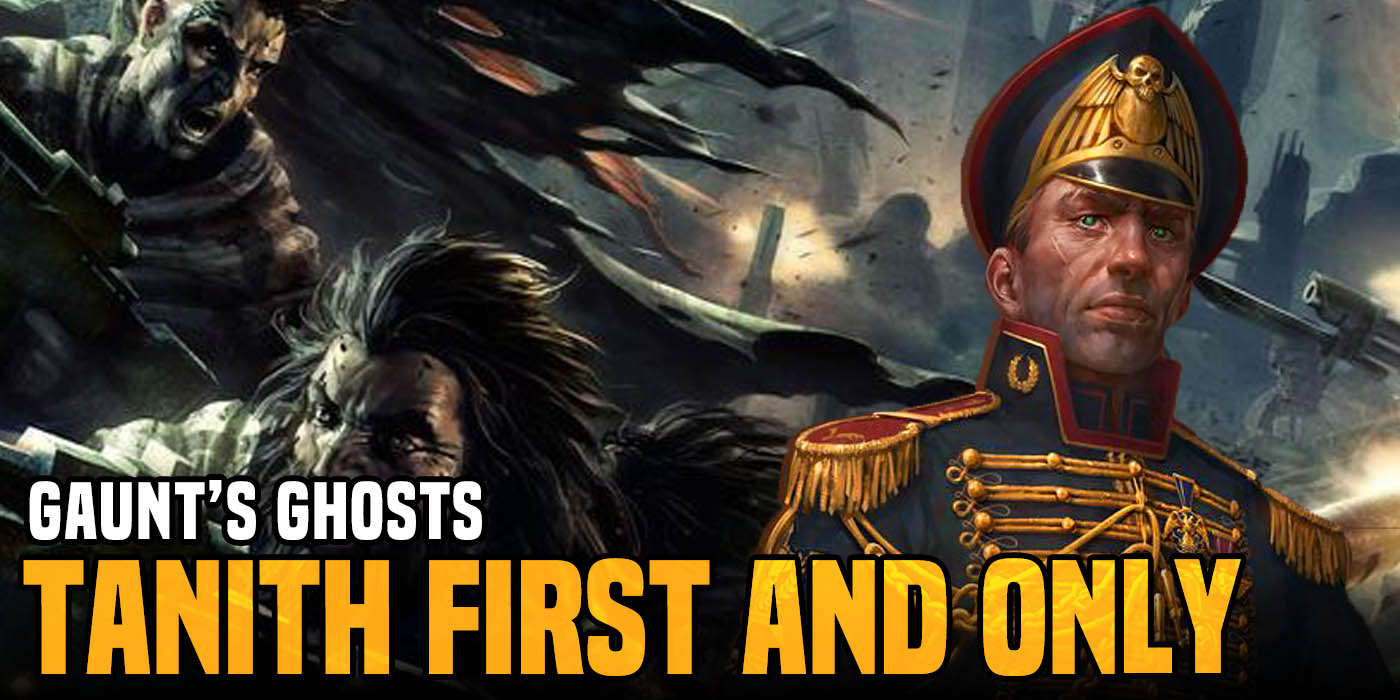 Today we delve into the “Tanith First and Only”, the legendary Astra Militarum Regiment under the command of Colonel-Commissar Gaunt.

The Tanith First, more commonly known as the Tanith First and Only, was an Imperial Guard Regiment raised during the Sabbat Worlds Crusade. They were also colloquially known as “Gaunt’s Ghosts”, after their commanding officer, Colonel-Commissar Ibram Gaunt.

Primarily light infantry, the name “Ghosts” referred to their superlative stealth and reconnaissance skills, but it was also a melancholy reminder of the fact that their homeworld, Tanith, was destroyed by the forces of Chaos shortly after their initial Founding. 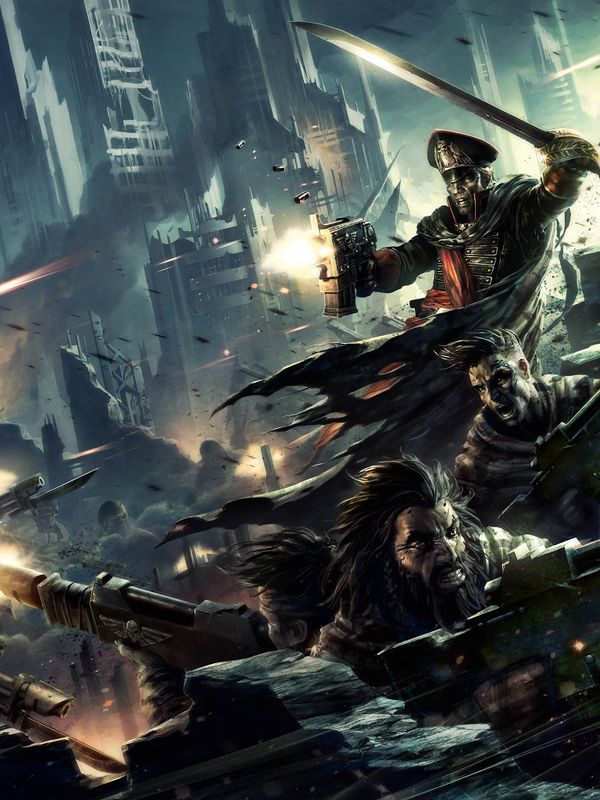 During the Sabbat Worlds Crusade, the planet Tanith was called on to raise regiments for the Astra Militarum for the first time in its history. Originally, was tasked to contribute three regiments for the Imperial Guard: the Tanith 1st, 2nd and 3rd – totaling 6,000 men and a small number of vehicles and artillery pieces, to be commanded by Colonel-Commissar Ibram Gaunt. On the very night of the regiments’ Founding ceremony, however, disaster struck: a Chaos splinter fleet that had slipped through the Imperial Navy blockade arrived in the Tanith system, which was practically defenseless. Gaunt quickly decided that Tanith could not be saved, and, instead of allowing the guardsmen to engage in a futile defense of their homeworld, ordered as much of the men and equipment evacuated off-planet as possible before the Chaos ships arrived. In the attack that followed, Tanith and the majority of its people were immolated, with only around two thousand survivors. The remnants of the three regiments were formed into a single regiment, the Tanith First and Only, with Gaunt promoting two members of a delegation sent to confront him, Corbec and Rawne, into its colonel and major respectively. 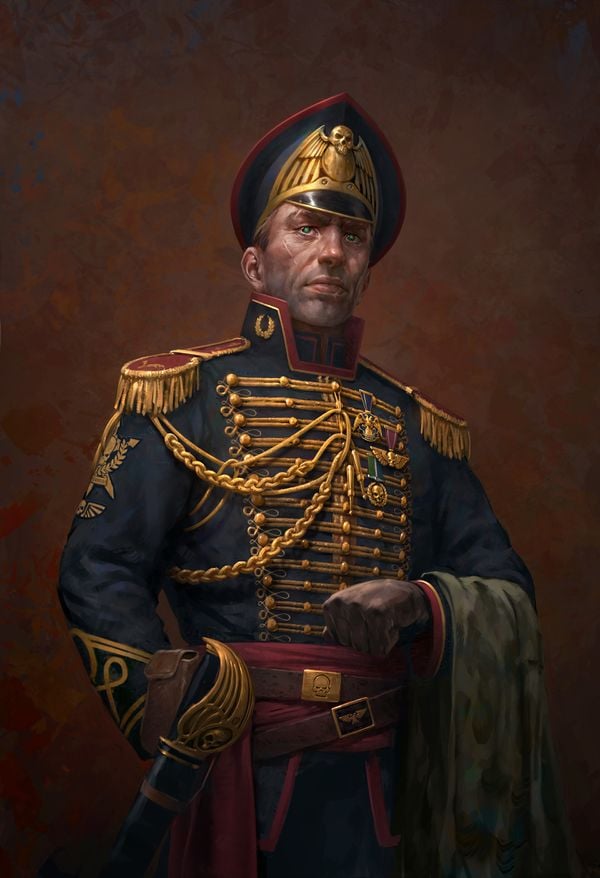 When Ibram Gaunt was sent to Tanith to oversee the founding of these regiments, he was not impressed by the appearance of the men, initially describing them as “a scrawny, scruffy mob of soft-voiced woodsmen”. Gaunt’s opinion of his new regiment changed quickly after seeing them in combat for the first time on Blackshard. Because of their exceptional stealth and scouting skills, they never got lost even on the most confusing of battlefields, and using camo-cloaks they could move quickly and stealthily through terrain. On Blackshard the regiment’s master sniper, Hlaine Larkin, coined the name “Gaunt’s Ghosts”, referencing both their superlative stealth abilities and the fact that they were dispossessed ‘ghosts’ of men. 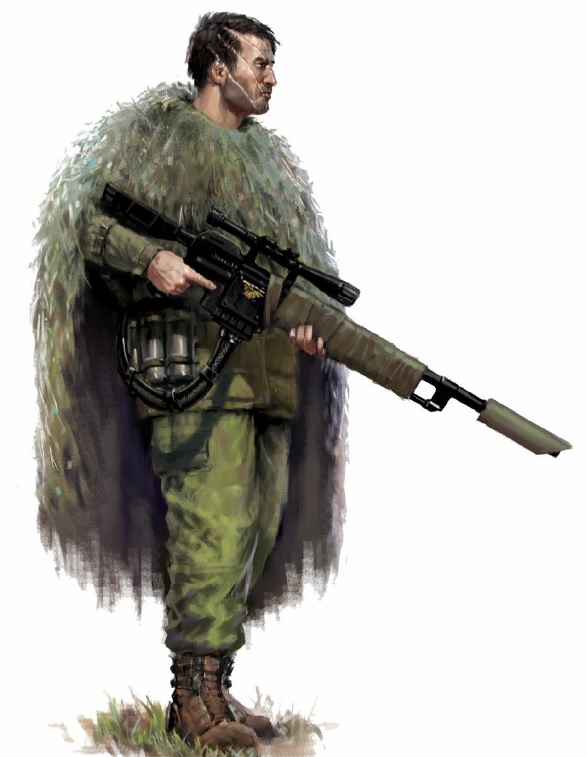 The Tanith are unparalleled scouts, marksmen, masters of stealth tactics, and excellent light infantry. They possess an unerring sense of direction, a trait developed for survival on a planet where the nalwood forests actually move to conceal the paths through them. While the Verghastite and Belladon infantrymen do not have this uncanny knack, they are also proven light infantry specialists, with Verghastite Hive City backgrounds, in particular, complementing the talents of the Tanith woodsmen. The First and Only excels in stealth infiltration missions but has proven particularly tenacious in defensive operations in urban terrain.

Even amongst such light infiltration infantry as the Tanith, there is always room for the truly elite. In the Ghosts these take on two forms:

In order to offset their light infantry status, the Tanith employ several types of heavy-weapons for support in combat. Heavy guns such as autocannons are handled by teams of two, one gunner and one ammo feeder. Trooper ‘Try Again’ Bragg was famous for being able to carry one of these single-handed, as well as for his terrible aim, before his death on Phantine. The Tanith also employ flamer units and rocket launchers, though they call the latter ‘tread-fethers’. 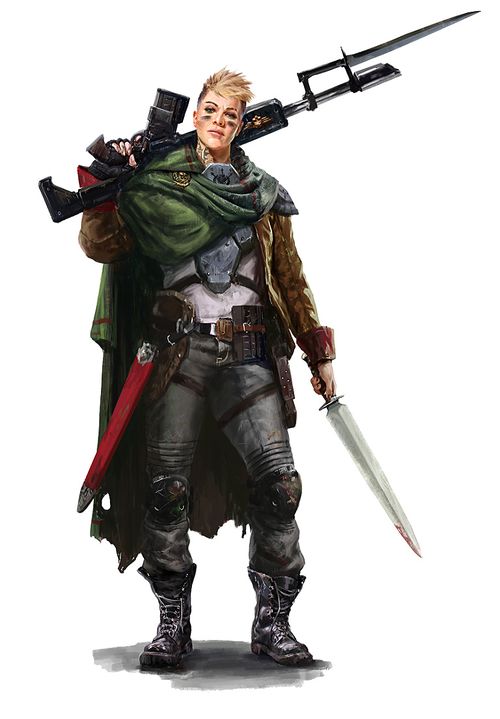 Every trooper carries a thirty-centimeter combat blade known as a Tanith War-Knife or ‘straight silver’. The Tanith are known to practice an unusual form of fighting specifically suited for the weight and length of these knives.

The Tanith are known to make use of more specialized equipment, depending on their mission. This has included dedicated climbing gear and, on one occasion, grav-chutes. The Tanith uniform is black, with optional helmets for standard troopers and forage caps for the regiment’s elite scout platoon. Camo-cloaks (made of cameleoline) are standard.

The cap badge for the Tanith is a wreath-surrounded skull with three daggers behind it; each dagger representing a Tanith regiment. On the badge is the inscription “For Tanith, For the Emperor”. After the destruction of the Tanith 2nd and 3rd regiments, the Tanith snapped off the two outside daggers on their cap badges. The Verghastite cap badge is an axe-rake to symbolise their former hive‘s mining and industrial background. These pins and other badges that indicate rank or specialisation are dulled down with soot or boot-black to aid in stealth operations. 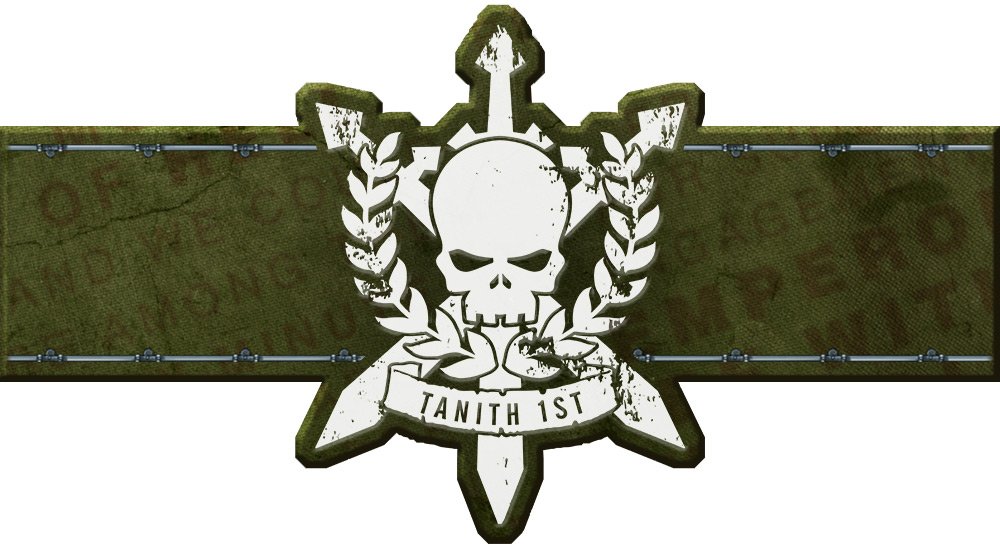 Prior to their re-organisation into the 81st-1st Recon, the Tanith were divided into numbered platoons. Each of these platoons was led by a squad-leader, usually a sergeant, though higher-ranking men like Colonel Corbec and Major Rawne had their own platoons as well. Each squad-leader had their own numerical call-sign, though this did not always match the number of their platoon. (For example, Agun Soric‘s call-sign was 20 even though he was leader of five platoon.) This was possibly due to the fact that men kept their call-signs even after promotion, something Major Rawne disliked when he continued to be referred to as ‘three’ in battle even after he became the regiment’s second-in-command after the death of Colonel Corbec.

Sample platoons and leaders are as follows: