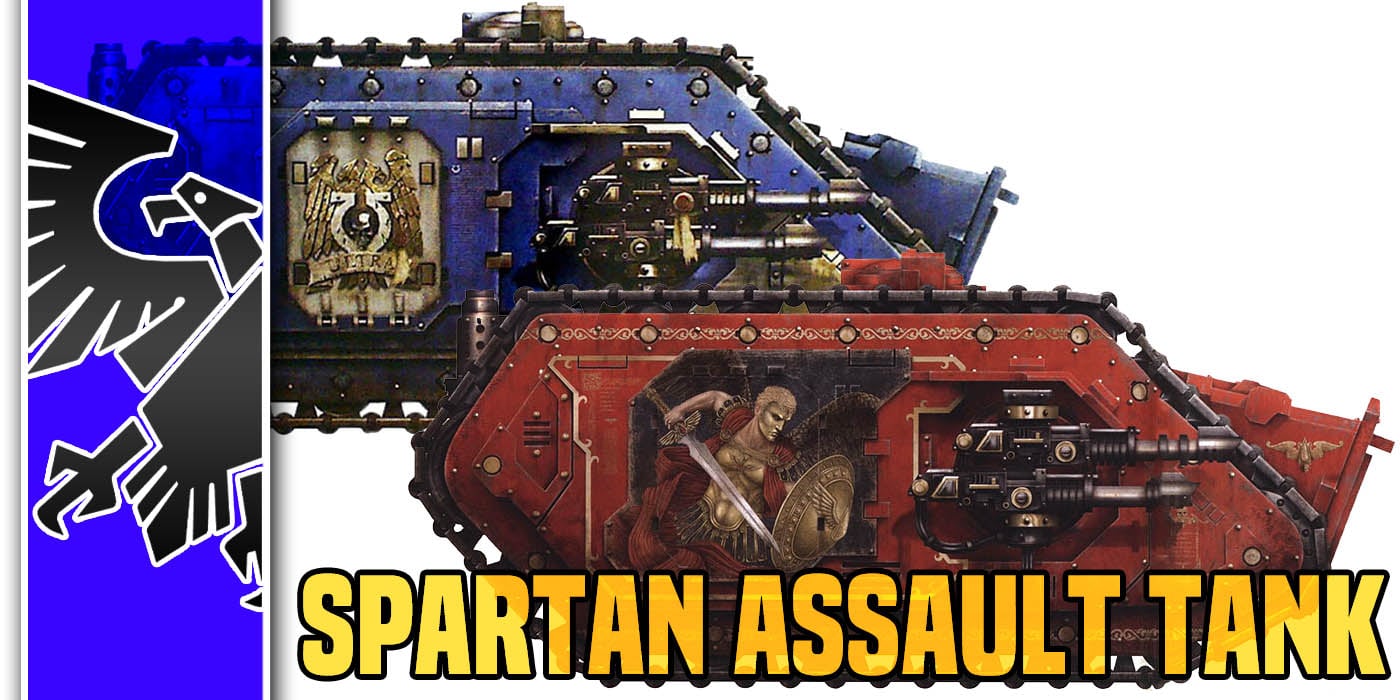 The Spartan Assault Tank was a large heavy transport designed during the Great Crusade and Horus Heresy to carry a full squad of Terminator-armored Marines.

Originally designed to get through the Ring of Death surrounding the city of Aries Primus on Mars, the standard Land Raider at the time could not transport Terminators. Such was the lethality of the Ring of Death plasma defense systems, that even with the use of the Spartans, only the fraction of Terminator squads could hope to survive the advance. The design is based on the famous Land Raider. 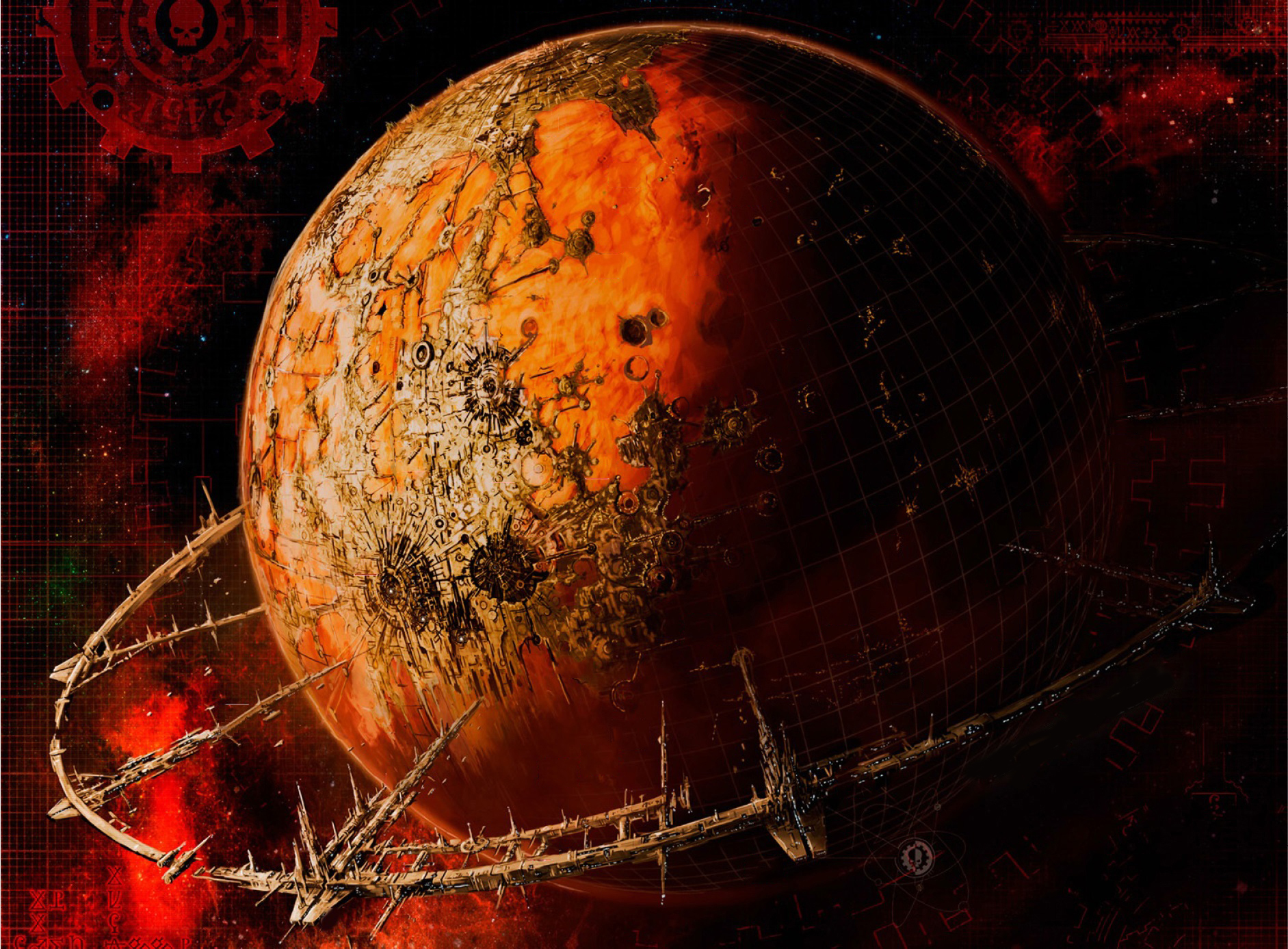 The Spartan design used today features the twin hull-mounted heavy bolters seen on contemporary Land Raider designs, as well as a pair of sponsons fitted with a deadly quad-lascannon battery each. It is able to transport 25 Space Marines in power armor and has the largest transport capacity of any dedicated transport vehicle used by the Space Marines save the Mastodon. Additionally, it is considerably faster than other Land Raider variants despite its increased size, due to its reactor-driven motive drive systems and secrets.

Many Space Marine Chapters still maintain these huge war machines as part of their arsenals and deploy them into warzones where even the mighty Land Raider would be torn asunder. The Spartan is mainly popular in such Chapters who possess many Terminator suits, such as the Minotaurs. Chaos Space Marine warbands still operate Spartans that date back to the Great Crusade, with most belonging to the original Traitor Legions.

The Cerberus was an Adeptus Mechanicus and Legio Astartes heavy assault vehicle of the Great Crusade and Horus Heresy era.

An experimental design based upon the Spartan Assault Tank chassis, internal capacity was removed to make way for its Neutron Laser Projector and its required power sources. Constructed from reverse-engineered Dark Age of Technology-era wreckage recovered from Deep Hyades-VI by Explorators, controversy arose over the weapon’s notorious instability. Nonetheless, the Cerberus and its Neutron Laser Projector proved effective enough to rival the larger and more common Turbo-laser Destructors found on Titans and Shadowswords. For anti-infantry defense, the Cerberus is equipped with sponson Heavy Bolters.

Shortly before the outbreak of the Heresy, the first Cerberus vehicles were delivered to a number of Space Marine Legions. Due to the complexities to maintain the vehicle and growing complaints of a corrupted Machine Spirit, very few remain in service as of M41

The Typhon was a heavy assault vehicle used by the Legio Astartes during the Great Crusade and Horus Heresy.

Named after the ‘Great Beast’ of Terran myth, it was developed by the Adeptus Mechanicus simultaneously with the Spartan Assault Tank and as a result shares its basic hull, armor, and chassis designs. The Typhon is a mobile gun and siege platform that operates a single massive Dreadhammer Cannon.

The design itself was created in response to a request from Perturabo, Primarch of the Iron Warriors, who demanded a vehicle that could deploy rapidly but also carry heavy fortress-breaking firepower. As with many other classes of heavy tank, the Typhon fell out of use in the aftermath of the Horus Heresy. However, some chapters still have small amounts of Typhon’s in service. Still, many Masters of the Forge are reluctant to use Typhons in all but the direst circumstances, believing that their creation’s bond with Perturabo may stain their machine-spirits forever.

The main weapon of the Typhon – Dreadhammer Cannon can demolish any fortifications of the enemy and since Great Crusade provided strong siege addition to any Space Marine army.

Chaos Space Marine warbands are still known to use Typhon’s, but these are relics of the Great Crusade and have long since been Daemonically corrupted.

Learn More of the Spartan

~ All hail the Omnissiah, who created these blessed machines.