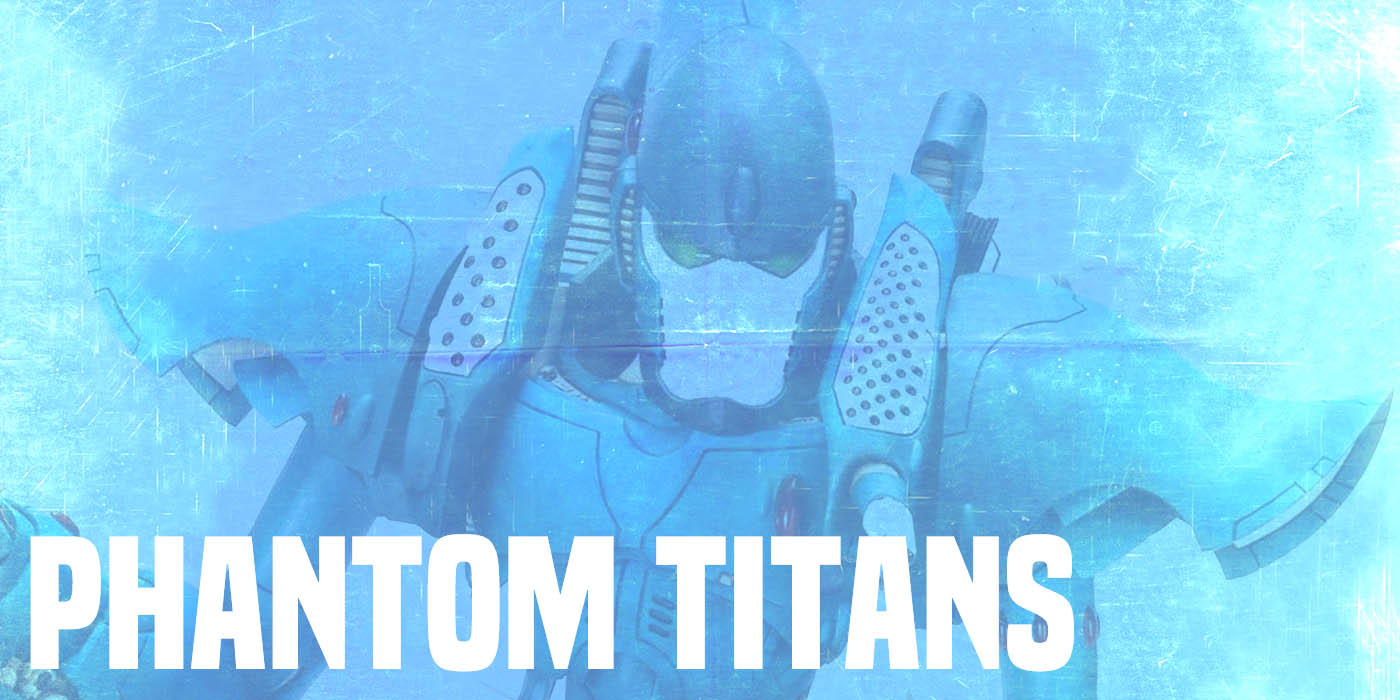 Today Loremasters we speak of the height of xenos technology – the feared Phantom and Warlock titans of the Craftworld Eldar.

Come and learn of the mightiest titans of the Craftworlds, which even the Princeps of the Collegio Titanicus respect. 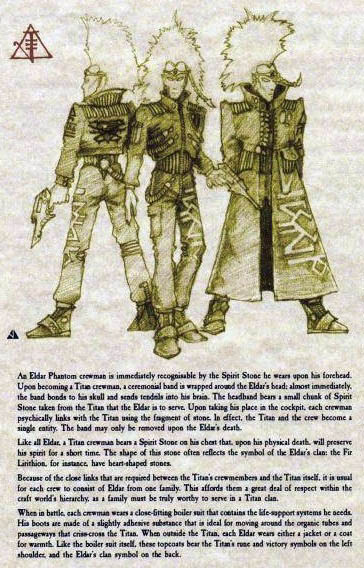 Eldar Titans are constructed around a Wraithbone core, a specialized psycho-reactive substance that, among other benefits, allows the souls of departed Eldar to inhabit the Titans. Moving freely throughout the construct these spirits give each Titan a consciousness of its own, which merges with that of its crew to create one sentience. The crew of a Titan, also known as Steersmen, also differ greatly from those of the lesser races. They are twins or triplets, a rare and reverend occurrence given the Eldar’s low birthrate, who are raised with their Titans from birth. In the case of smaller Titans, each sibling will occupy a different machine, while larger Titans will utilize a full set. The natural emotional bonds between each sibling, combined with their latent psychic potential and the special relationship between the crew, Titan, and spirits allows for a tremendous degree of control when operating these towering constructs. The most sorrowful, yet most skillful, of these pairings is when the soul of deceased kin is interred within a Titan’s wraithbone shell. Their still-living siblings will seldom leave the machine, preferring instead to remain inside and commune with the departed. 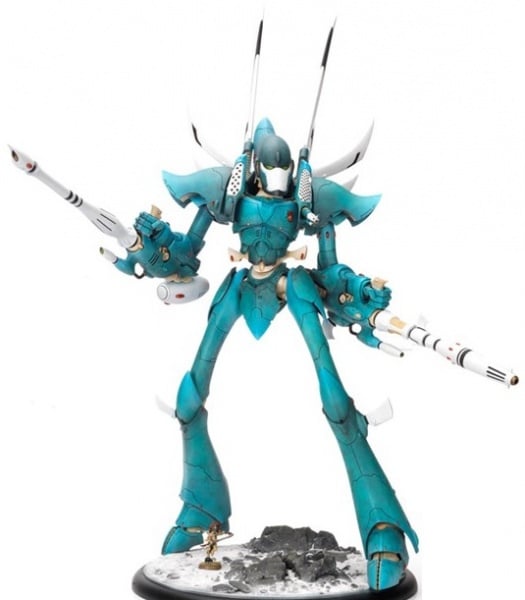 Phantom Titans are graceful constructs with superior agility and speed compared to other Titans. The pinnacle of Eldar warpcraft each one is constructed around a Wraithbone core, a psychic material that allows the souls of deceased Eldar contained within Spirit Stones to move freely throughout the machine. This gives the Titan a consciousness of its own, which merges with that of the Phantom’s crew and help guide them. Some Phantom Titans will have a single Steersman pilot them, while others will instead be guided by twins or triplets, but regardless when their consciousness merges with that of the Titan’s they create one sentience able to think, react and move with the speed of an Aspect Warrior. The Titan’s crew control their war engine from the head cockpit, giving them a good view from 25 meters above the ground. 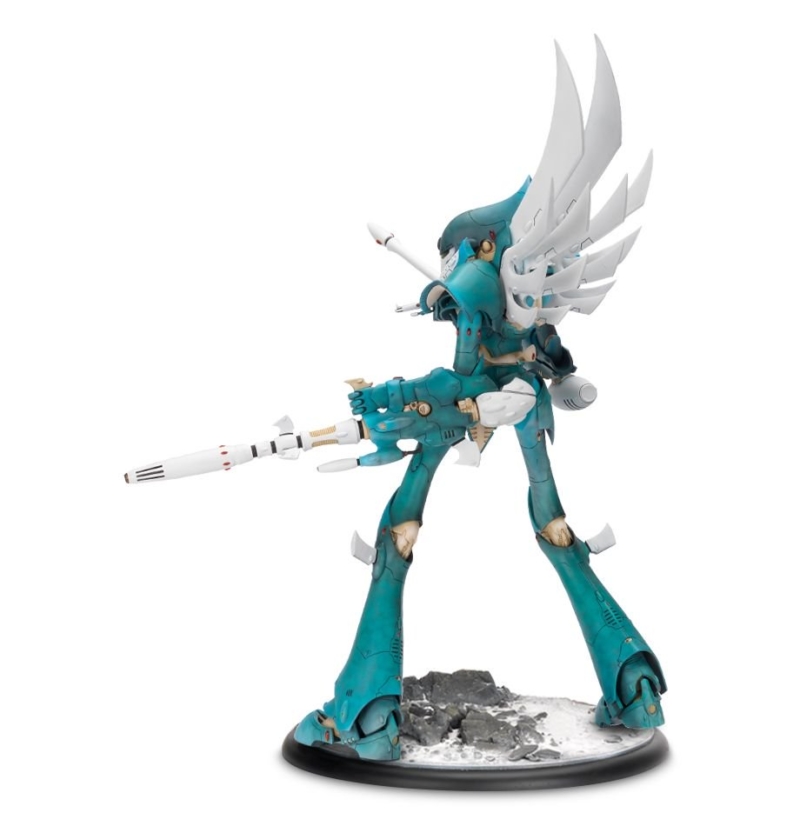 The Phantom’s primary arm mounts can be fitted with some of the Eldar’s largest and deadliest weapons. These include twin Phantom Titan Pulsars, Distortion Cannons or a special Power Glaive known as the Ashuna-Valcry’le. Secondary weapons mounted in its shoulders include Phantom Missile Launchers and either a Pulse Laser or Titan-grade Starcannon. It is also protected by a Titan-grade Holo-Field projected by the large rear fins.

Phantom Titans do not participate in the Eldar’s normal warfare operations of raids and surgical strikes but are instead reserved for when the Craftworld must engage in a pitched battle. Only during these desperate times are the Webway portals opened wide enough to allow the Phantom Titans to stride upon the battlefield and wreak terrible destruction upon their foes. 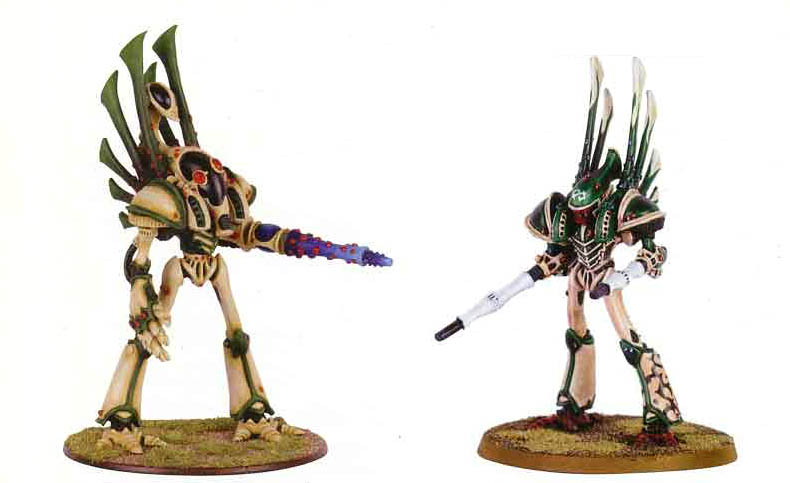 A Warlock Titan is a rare variant of the Phantom Titan whose Wraithbone core contains the spirits of mighty Seers and Warlocks.

The souls of these dead psykers can merge their psychic powers, amplified by the Titan’s wraithbone structure, and combine with the smooth agility and sophisticated technology of the Eldar to create the pinnacle of psychic engineering.

The psychic abilities of a Warlock Titan are immense and manifold. Its witch sight allows the Titan to see the ebb and flow of time, not only to foresee its immediate future and any potential dangers but to also look ahead into the possible futures, allowing it to move in perfect synchronization with the threads of fate. It can also twist together those threads so that doom more readily finds its enemy, resulting in cannon shots and even laser beams changing course to strike them, and it can give a mighty psychic roar which heartens allies and puts fear into the hearts of even the fearless. The psychic energy crackling through the Warlock Titan’s body can ward off blows, instantly destroy Greater Daemons in close combat, and give power to its more feared weapon, the Psychic Lance.

Besides the Lance, the Warlock Titan is also armed with twin missile launchers and either a Pulsar or Titan-class Power Fist and is protected by reinforced armoring and a Holo-field emitted from projectors mounted on its wings. 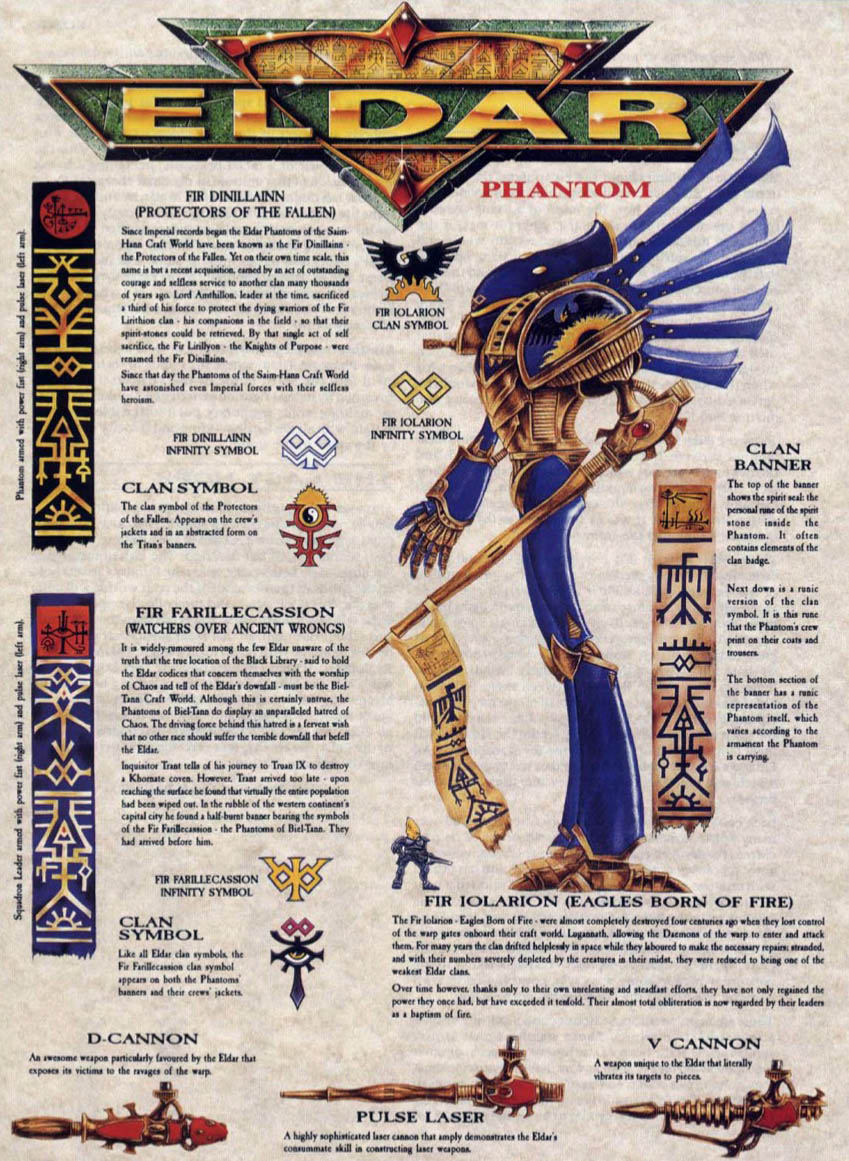 ~It is fortunate that the dying Aeldari possess but a handful of these machines, no match for our god-Machines.