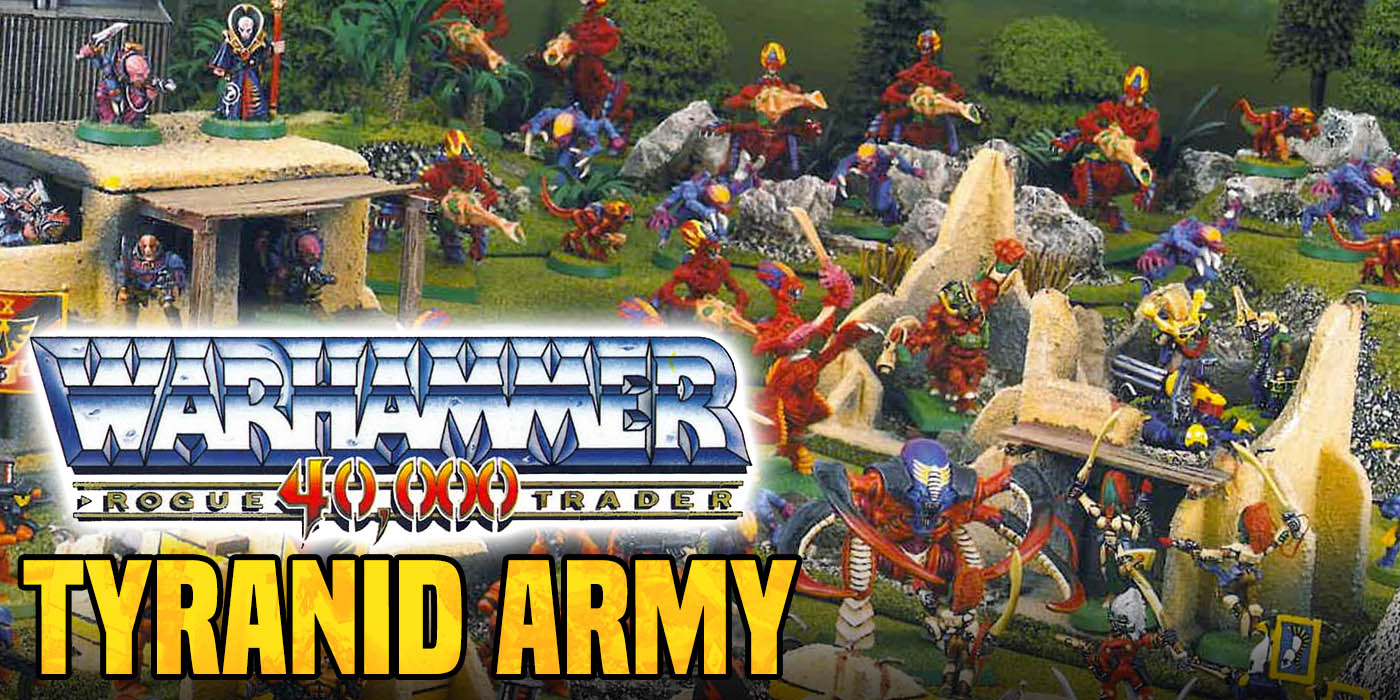 The first Tyranid Hivefleets devoured a path across the Imperium in 1992. Let’s take a look at that original Warhammer 40K armylist from many Editions ago.

Today we go back to the early days of the game.  The dread menace of the Tyranid Hivefleets first arrived in White Dwarf 145 in January 1992 – during Rogue Trader, Warhammer 40,000’s first edition.

The article covered the entire playable armylist, but didn’t go too deeply into the lore, which was rapidly evolving alongside Space Hulk and Advanced Space Crusade. It was from here that we got a first look at the core units of the Tyranids, which still had one foot in the original Rogue Trader hardback and would still wait three years to receive their first standalone codex in 2nd Edition. 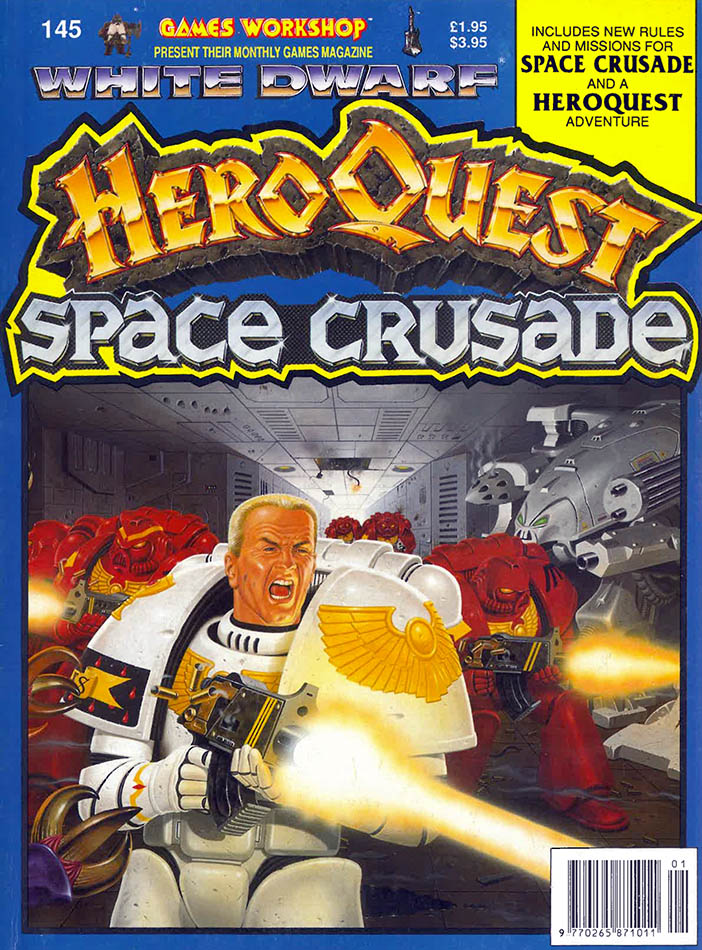 The lore covered the basics. You got the extra-galactic nature of the Tyranids, their early fights against the Imperium, their biological and hyper-evolution characteristics, along with some roughing in of what would later branch off into various seperate armies of Warhammer 40,000. Many of the original Tyranid ideas and units of the army would be forgotten in future editions. 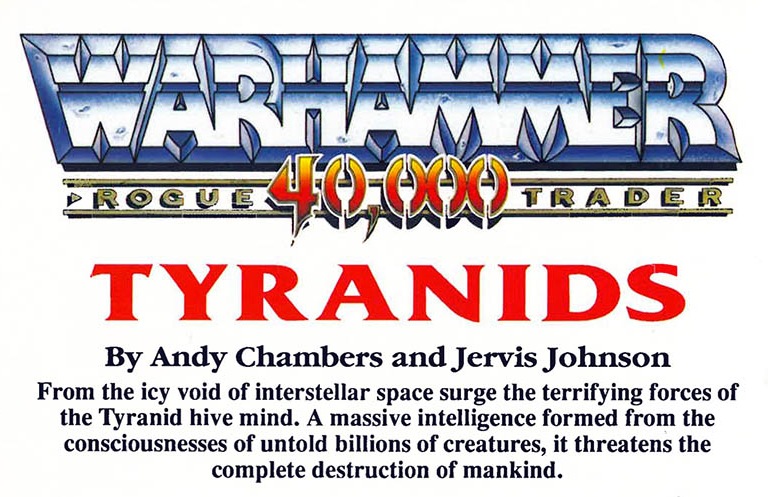 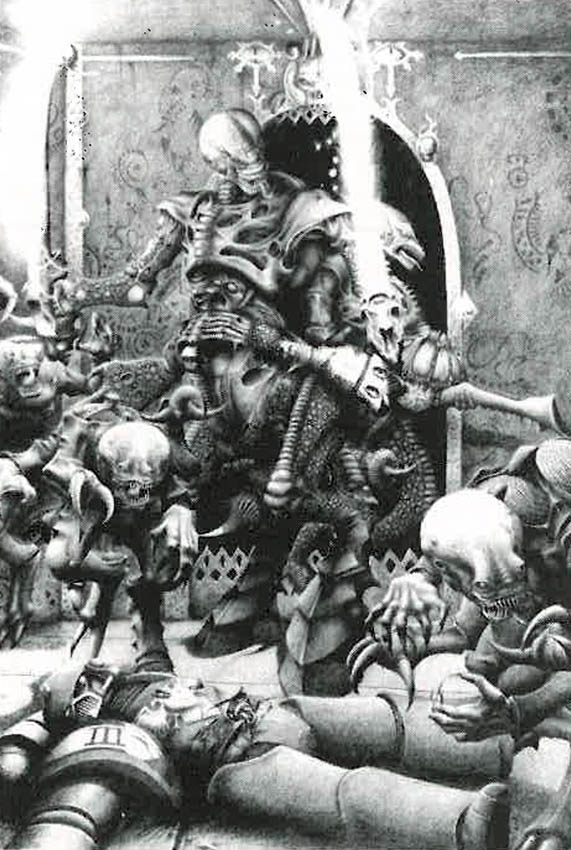 Over the decades, Games Workshop has tried all kinds of different concepts at how to represent the Hive Mind and later Synapse rules. Here are the original ones to use as a baseline for modern comparisons.  The basic concept was that Tyranids are immune to Psychology when within range of Tyranid Warriors (the only true Tyranids in this seminal list). When outside of range, they get “stunned” or go “berzerk” and double-sided tokens are supplied to keep track how they will behave. 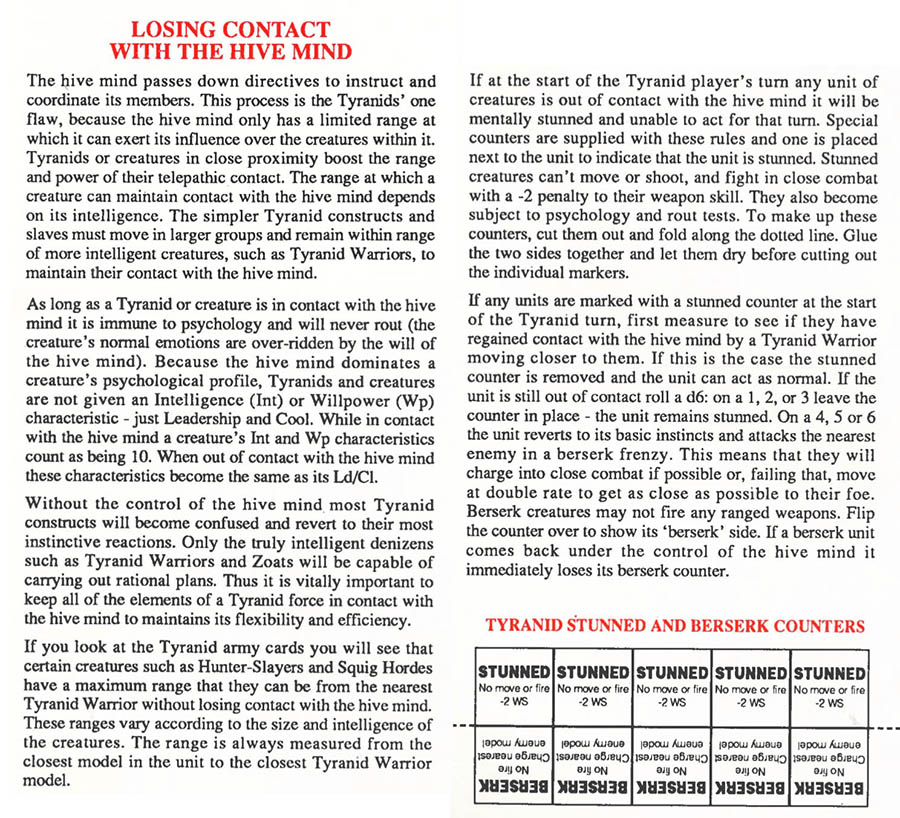 Now we get into the actual units. These provide the background of each unit and you can see how far some of these have evolved by the standards of 9th Edition.  the rules are on the backside of these cards and not shown. 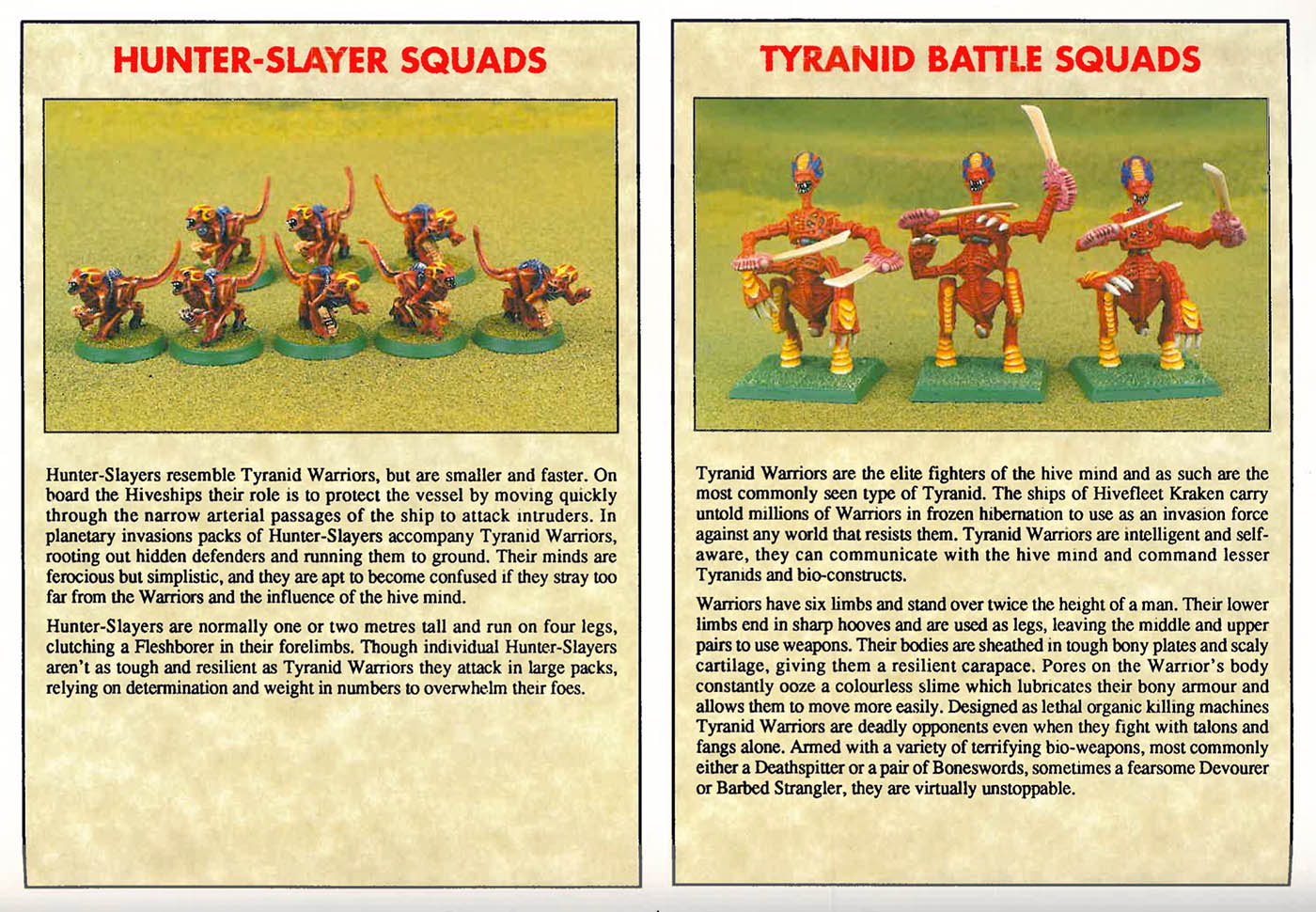 Hunter Slayers came right out of the Original Rogue Trader book. These would evolve into Termagants in due time. Then you get the turkey necked Tyranid Warriors who ran the entire army back in the day. No Hive Tyrants existed yet. 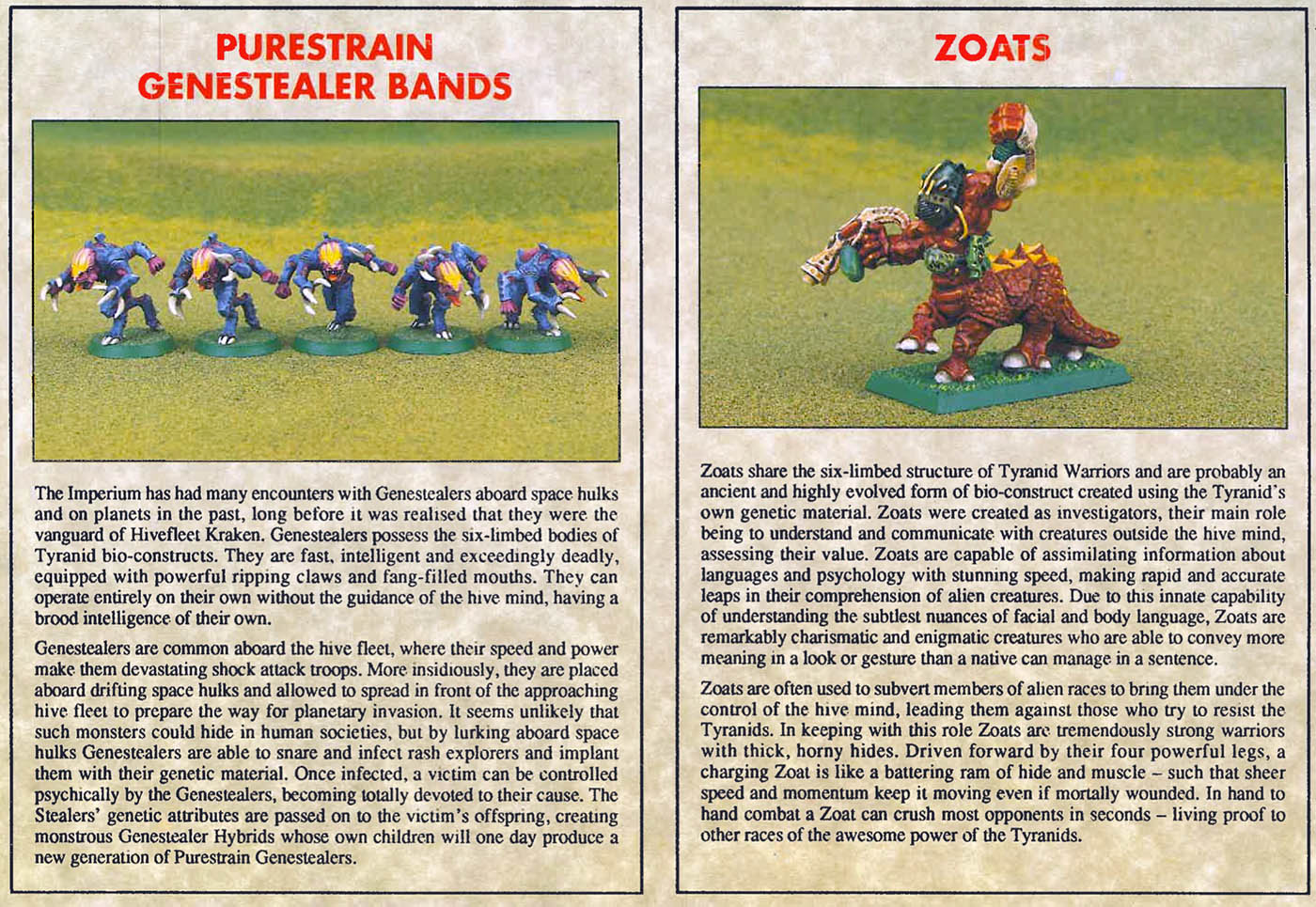 Genestealers were always a core part of the army, which officially tied the Tyranids to the scary bugs of Space Hulk. Note the now apocryphal origin story of Zoats. Now semi-legendary and poking around in Blackstone Fortress, here they are explicitly stated to be harbinger organisms of the Hive fleets, used to sum up potential prey races. 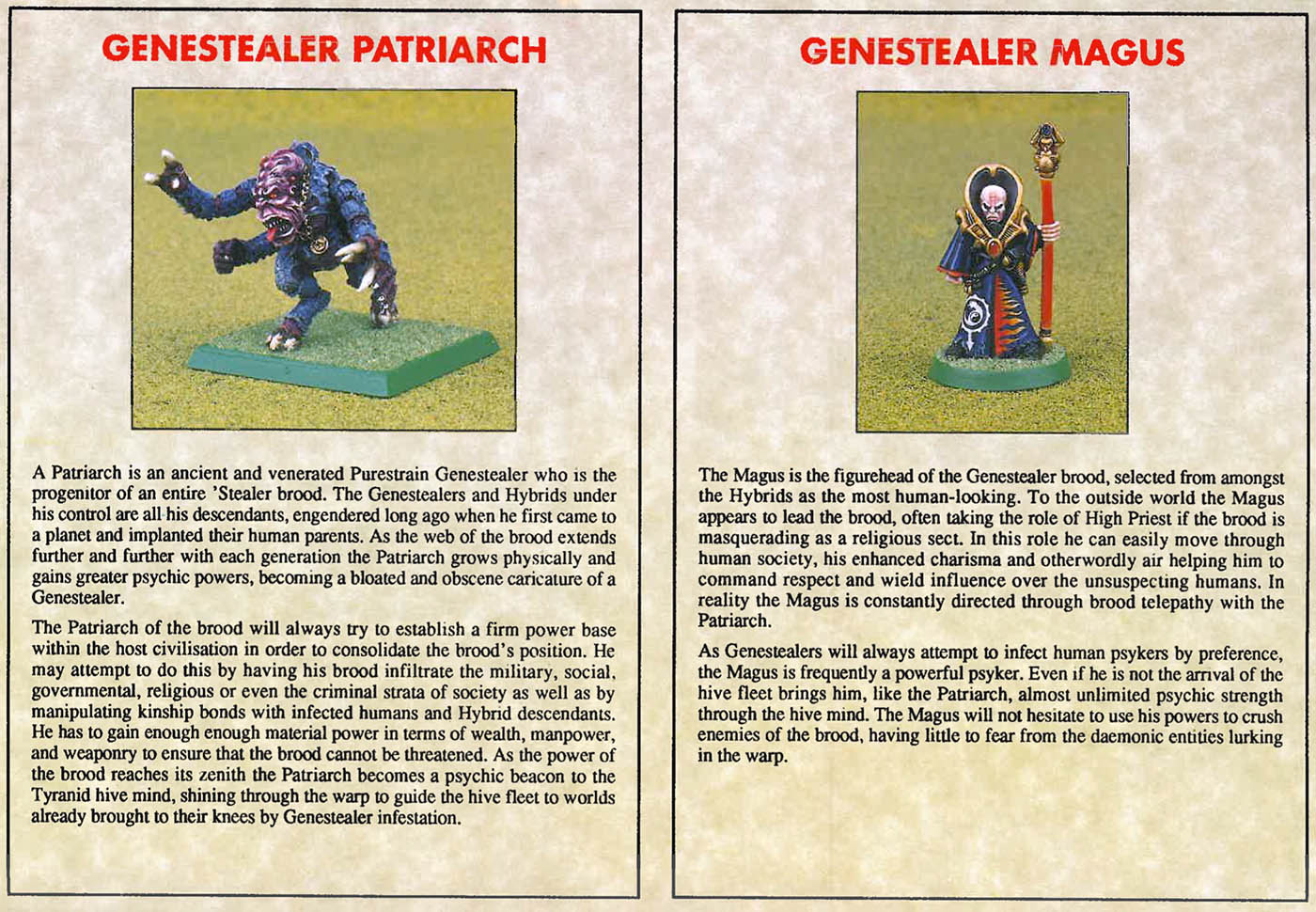 The Patriarch and Magus who had already appeared in Space Hulk so far. These were also peeled off into the separate Genestear Cult army, but in this incarnation were integral parts of the Tyranid list. Note the humble description of the Magus – just a human looking dude propped up by the HiveMind’s psychic will. They’ve come a long way. 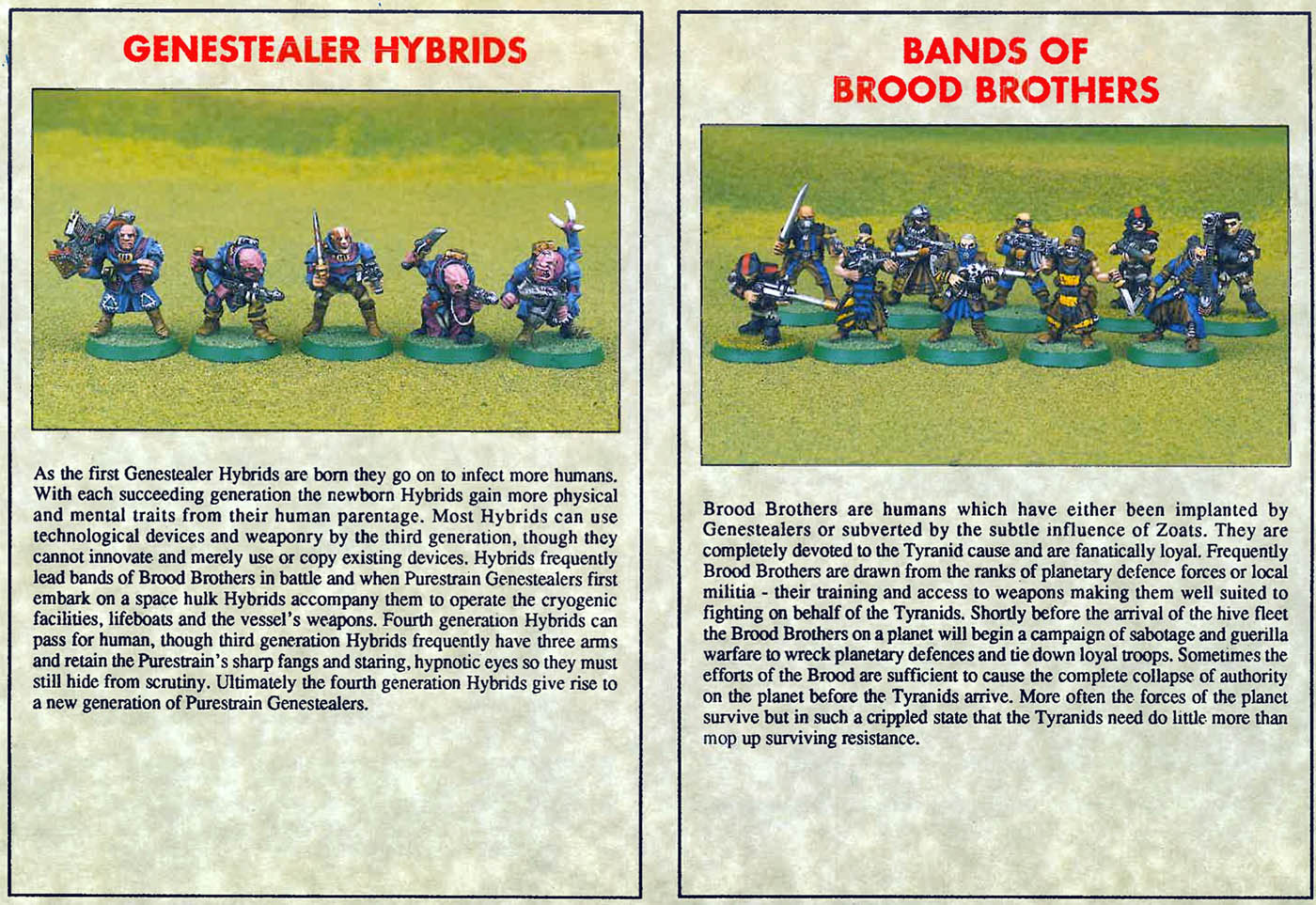 Hybrids and Brood Brothers. All of their core concepts are here, and they are almost unchanged 30 years on. If you need a lot of fairly ineffectual hordes to do the Tyranid’s bidding – these are your guys! Note the random composition of the brood brothers from various Rogue Trader minis including some plastic Imperial Army folks. 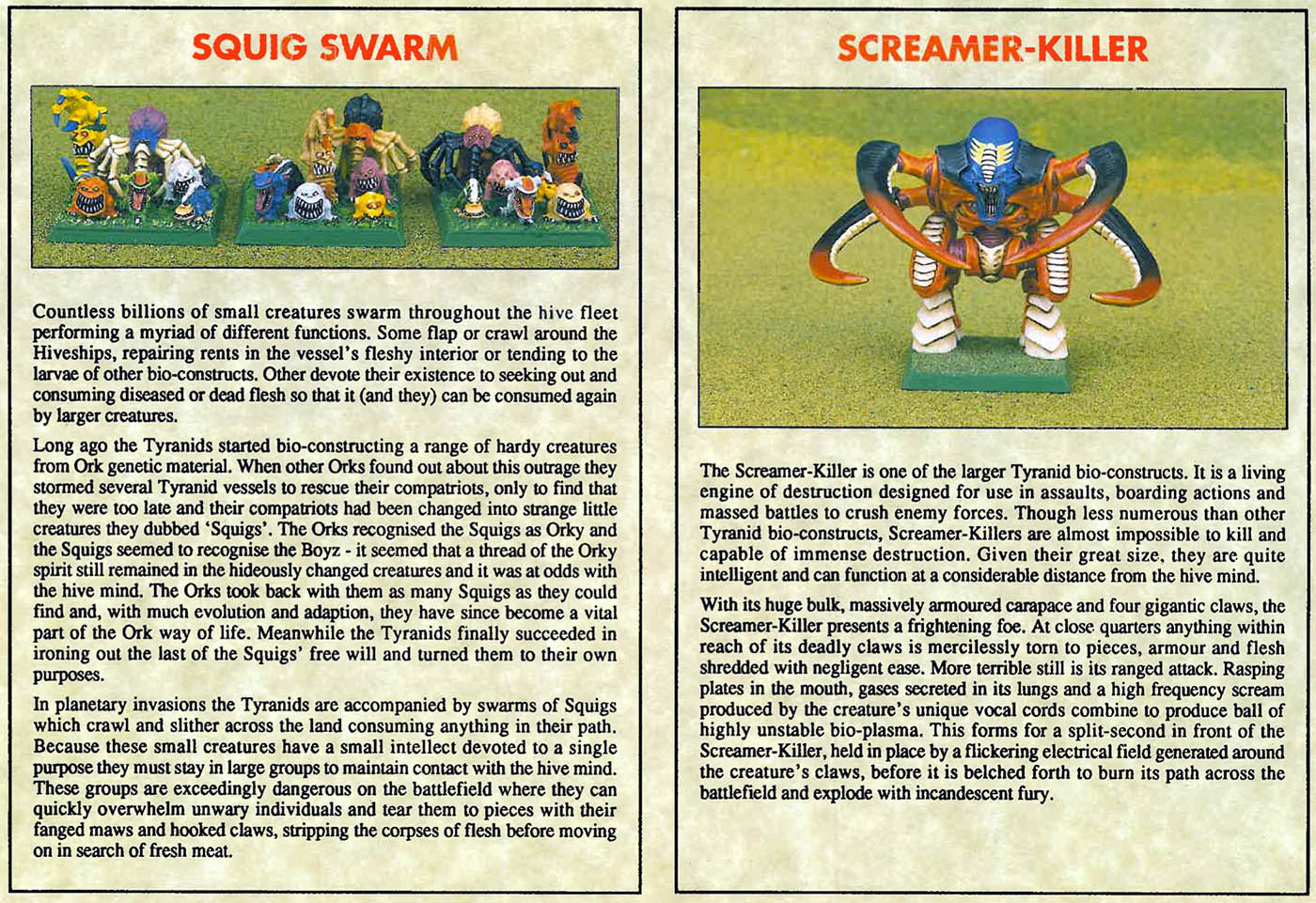 This is what you came here for. The COMPLETELY APOCRYPHAL origin story of Ork Squigs. Read that entire passage on the left and try not to laugh or smile. You’ll never look at modern 40K Ork Squigs the same way again. I guess both races got something out of the deal. Thirty years later, the Orks have Beast Snaggas that are all about their barely domesticated Squig (cousins?!), while the Tyranids have beaten the independence out of the renamed Ripper Swarms.

I really want to have someone make an CRUSADE narrative scenario of the Ork heist to jailbreak all their Squig buddies and get them off a Tyranid  hiveship.

Then note the classic Screamer Killer. This guy was the original big bruiser of 40K and even Marine Dreadnoughts stayed the hell away from it. If you wondered why some of those biomorph updates seem out of place in modern Carnifexes – it’s to allow you still recreate the magic of the originals. 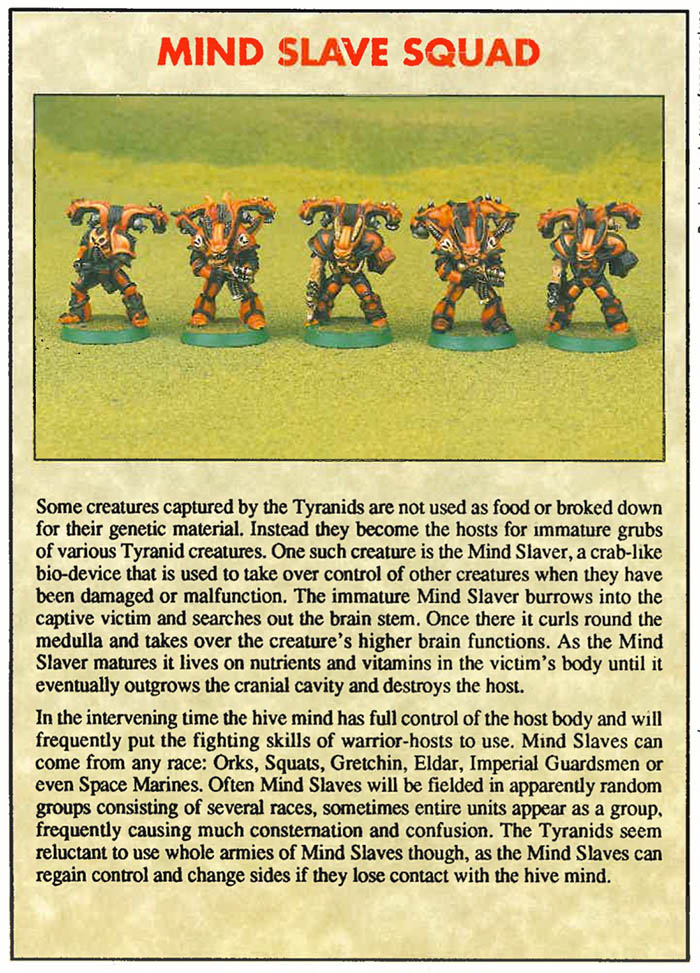 Last but not least, a discarded idea – Hivemind Slaves. You could use a big selection of units from other armies including Marines, but there was a VERY DANGEROUS catch.  If these fellows got out of Hivemind range, there was a 50% chance they would “wake up” and permanently switch over to control of the opposing player! Maybe it was best the Tyranids stopped this entire project and just melted down opponents for DNA. 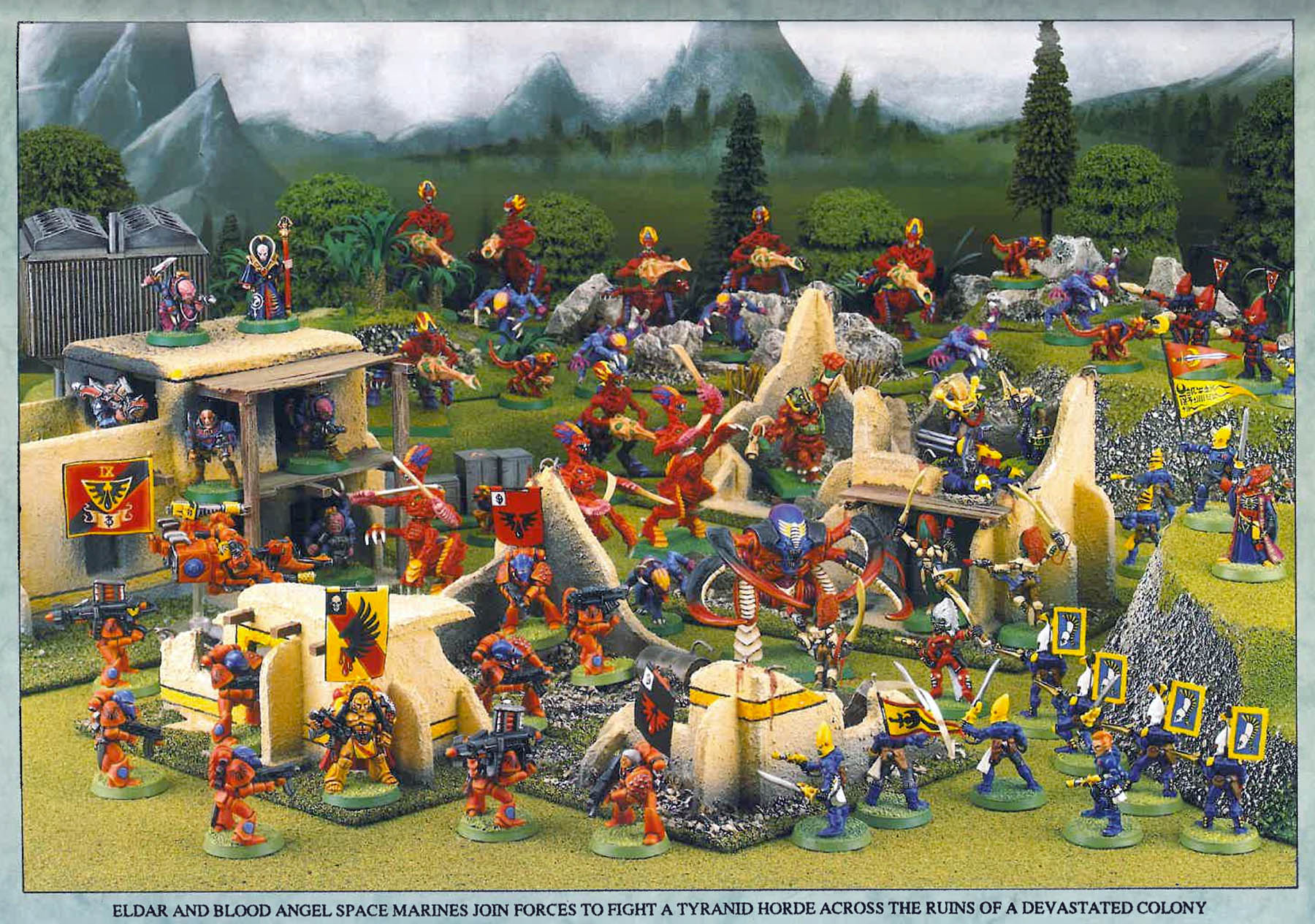 There is also some fantastic early 90s Rogue Trader photography in here. So bright!

Do you have any fond memories of the Rogue Trader Tyranid list? Let us know.