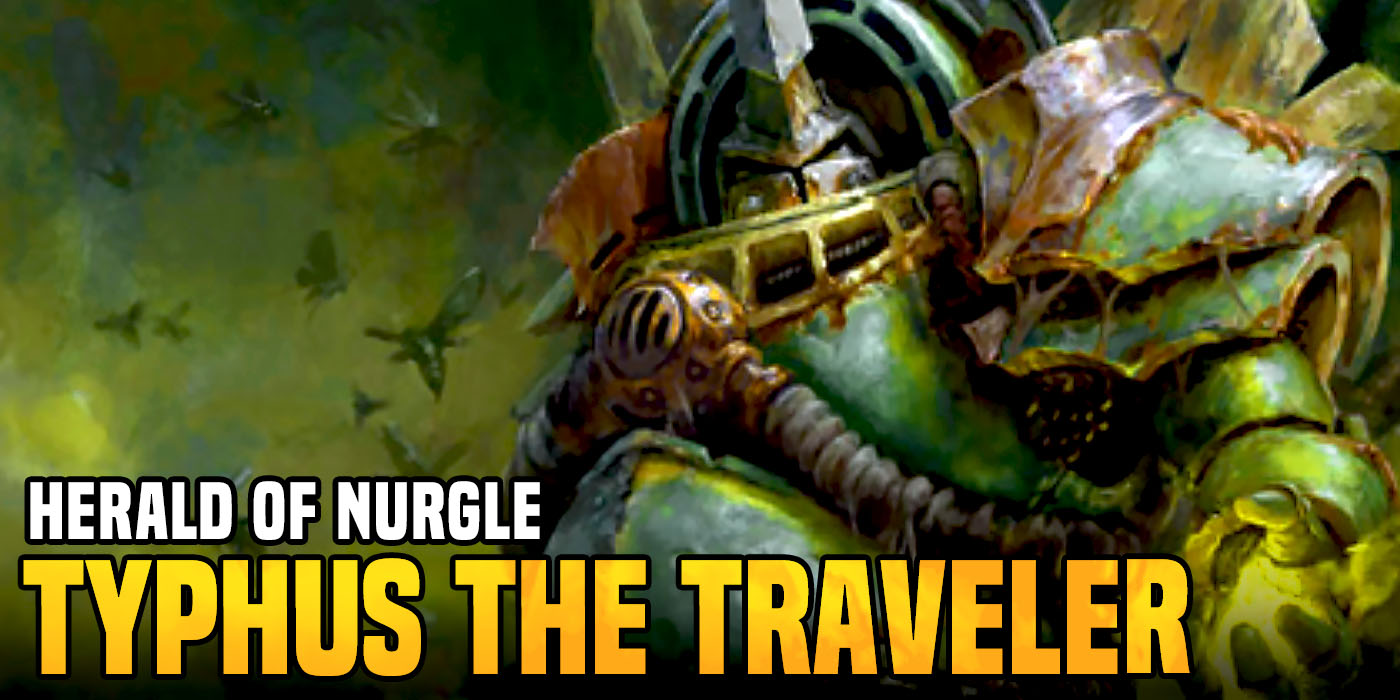 Today Warhammer 40K fans, learn of the monster singlehandedly responsible for the fall of the Death Guard – Typhus, Herald of Nurgle.

Typhus the Traveler, Herald of Nurgle, is a Chaos Space Marine of the Death Guard legion. 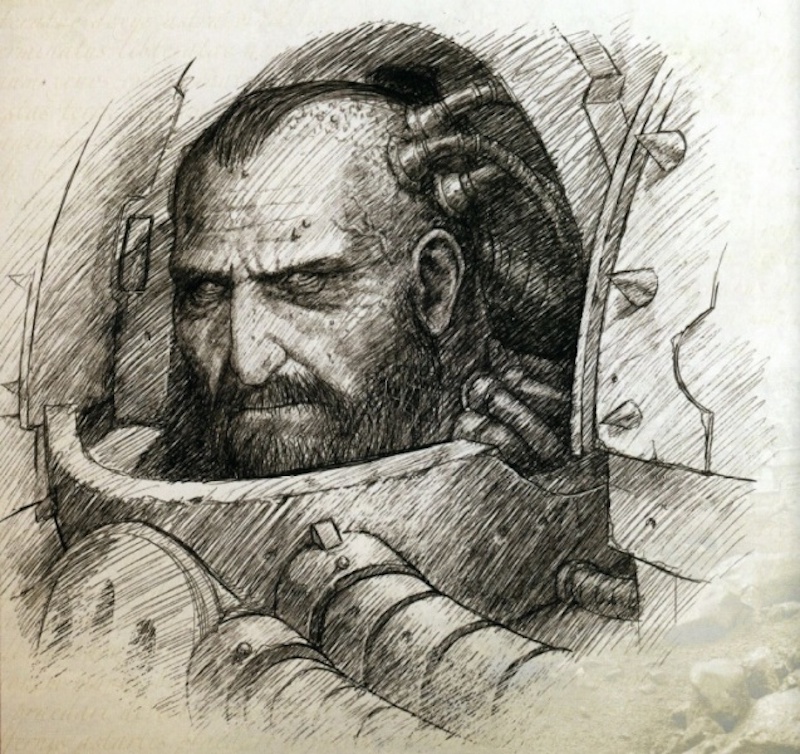 Typhus was born Calas Typhon on the Death Guard’s eventual homeworld of Barbarus. Typhon was a half-breed, the result of one of the Overlords of Barbarus taking a liking to his Human Mother. For this, his mother’s fellow villagers drowned her. As a child upon the toxic planet of Barbarus, Calas Typhon was troubled by nightly phenomena over which he believed he had no control. Whenever he was frightened or angered objects would shudder and smash around Typhon. Plants would wither and die under his gaze. These phantom powers troubled him greatly, but he resolved to turn them to his advantage. By the time Typhon reached maturity, he had learned to master the psychic energies that resonated within him each night; a feat of will that impressed his elders mightily. With this act, Typhon became stronger in his resolve to succeed than any of his peers. 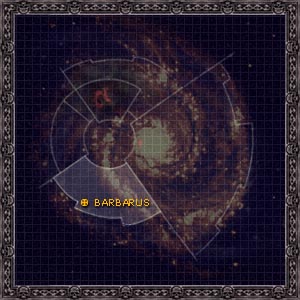 When Mortarion defected from the Overlords after witnessing their atrocities, Typhon was the first person the Primarch encountered and the young child helped lead him to safety. During his early adulthood, Typhus was a champion of Mortarion’s early Death Guard in his war against the Warlord of Barbarus. When the Emperor reclaimed his lost son Mortarion from the poisonous mists of Barbarus, and reunited him with the superhuman warriors born from his gene-seed, Typhon was amongst those chosen to join their ranks. As he joined the legion, his psychic potential was suppressed through training due to the anti-psyker sentiment of his Primarch. Nonetheless, through his rugged talent, Typhon was eventually able to rise to the prestigious position of First Captain. He shared a strong bond with Mortarion, the two being close comrades due in part to their shared origin as outsiders even among Barbarus. 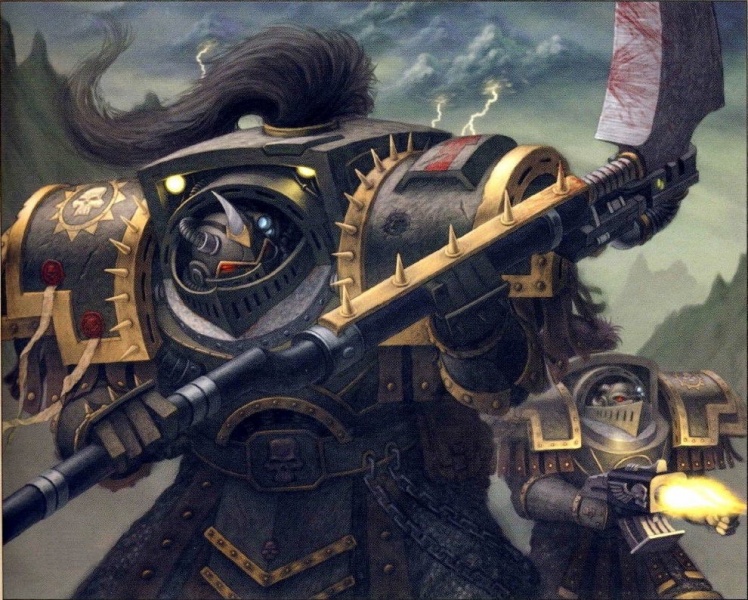 During the Great Crusade Typhon often proved his ability to shrug off wounds and effects of hostile actions alike, becoming a legend amongst his warriors. On the planet of Rothric IX during the eponymic Tribeswar of Rothric IX he managed to withstand a hard blow to the side of his head. Though this blow would have easily killed a lesser man, Typhon was merely driven into a cold rage, and taking up a short iron bar he killed every tribal warrior around him. In another episode, Typhon saved a squad of Sisters of Silence on the planet of Madrighoul by throwing himself onto a malfunctioning Krak grenade. After less than a week in the Apothecarion he had already healed and discharged himself as fit for active duty. 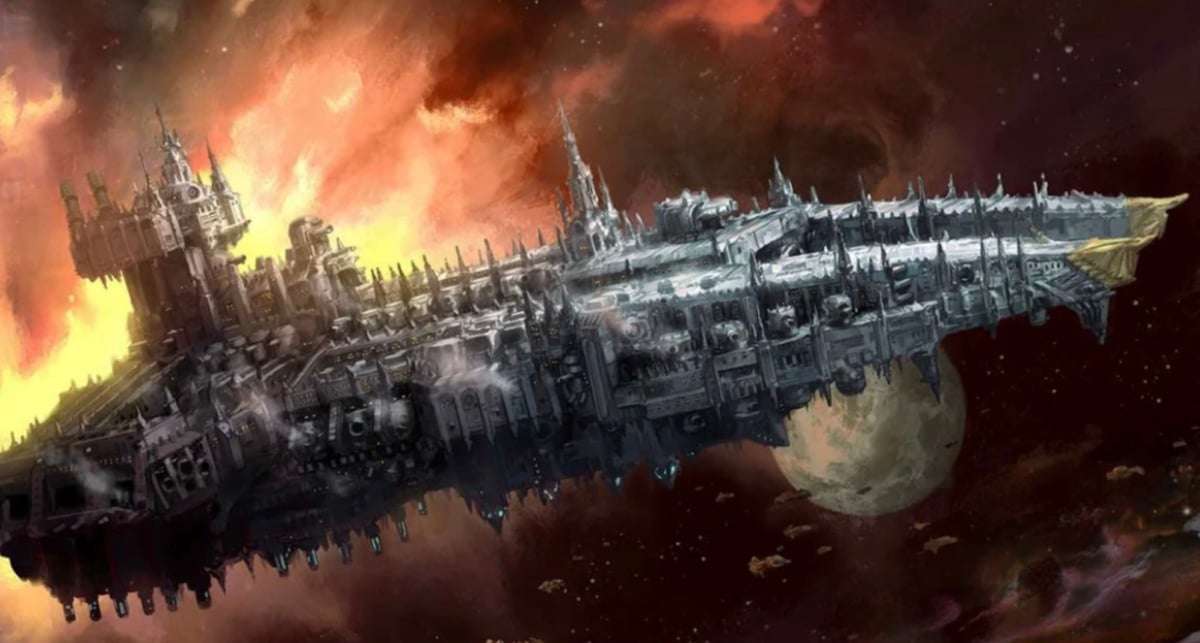 According to Typhon himself, he was secretly converted to worship of the Gods of Chaos during the Zaramund Campaign, receiving revelation at the touch of the hand of an old woman. Typhon’s allegiance to Chaos predated that of his own Primarch, or of Horus himself. With the help of his new gods, Typhon became First Captain of the Death Guard and commander of the battleship Terminus Est. Typhon was not particularly loyal to Mortarion, and always wished to travel the Galaxy and forge his own destiny in the name of the Ruinous Powers. 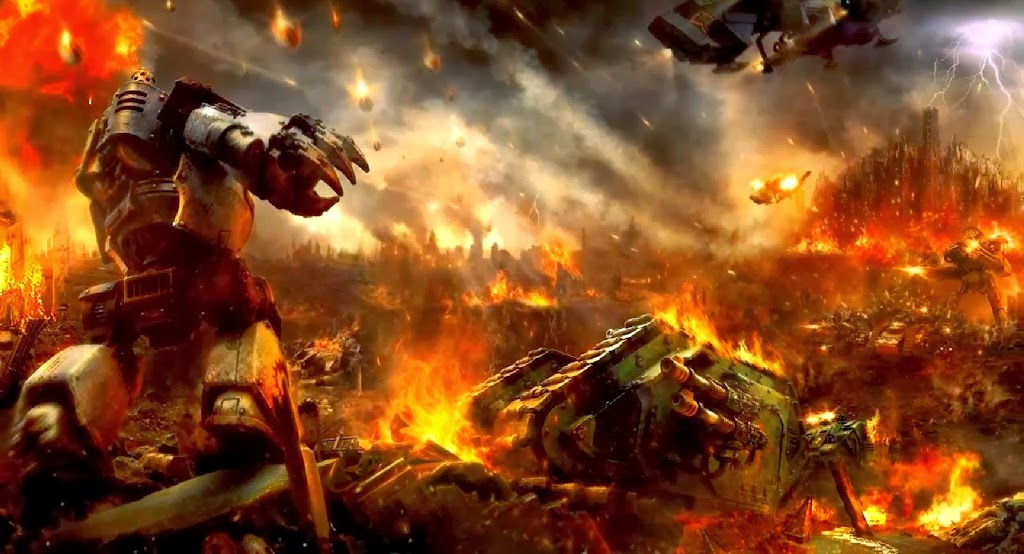 When Mortarion joined Horus in his rebellion, Typhon helped orchestrate the massacre of loyalist Space Marines on Isstvan III, when Horus’s fleet virus-bombed the surface and killed nearly every living thing aboveground. Because Battle-Captain Nathaniel Garro was unable to join his loyalist comrades on the surface, Typhon detailed him to the frigate Eisenstein, along with Commander Ignatius Grulgor, privately ordering Grulgor to deal with Garro and his men when necessary. Typhon was furious when the Eisenstein broke from orbit without joining the virus-bombing. Realizing that Grulgor had failed, he commanded the Terminus Est in pursuit of the frigate, and managed to severely damage the vessel, but was unable to stop it from escaping into the warp. 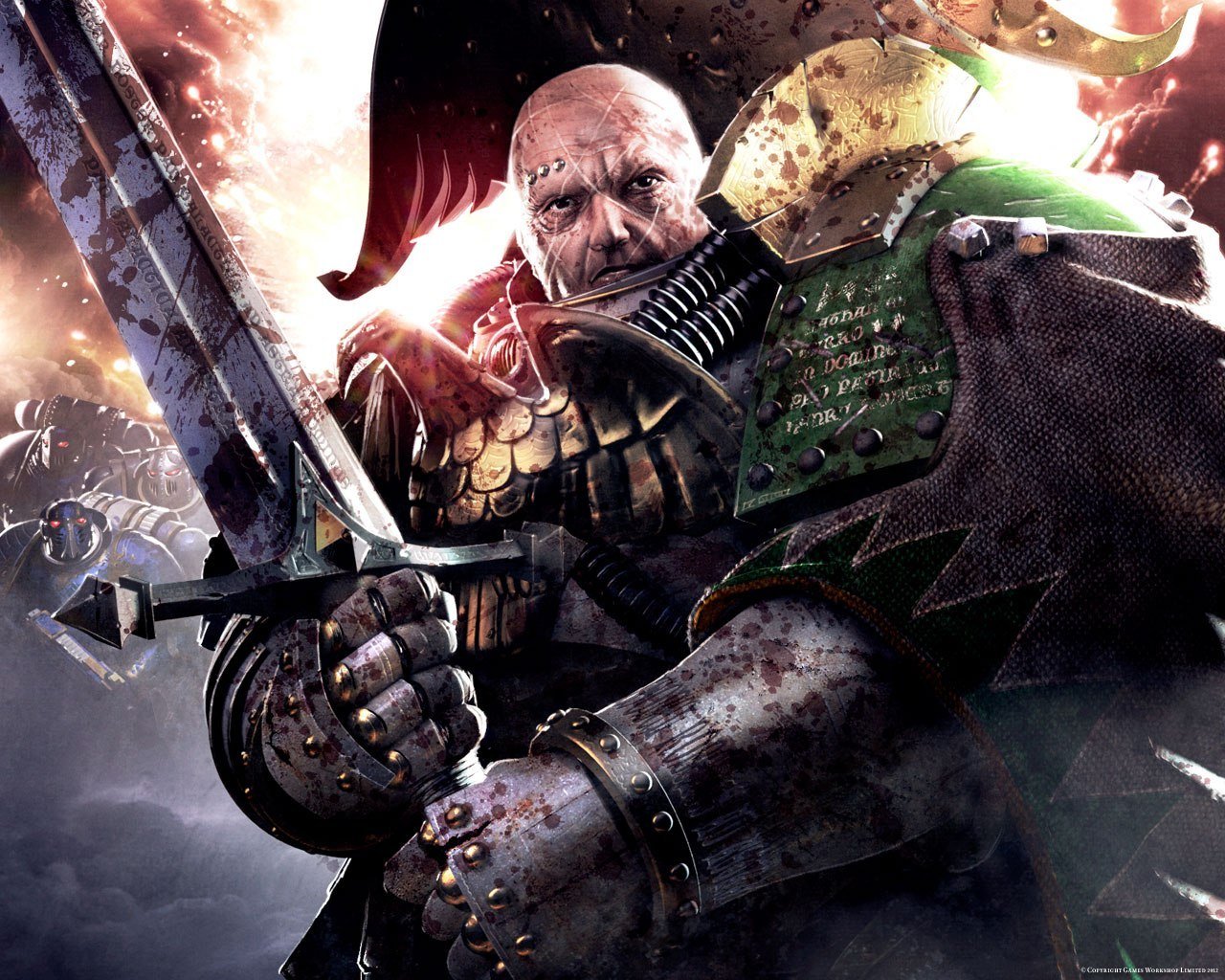 Later during the Heresy, Typhon led half of the Death Guard in a splinter fleet while Mortarion himself took command of the other. During his campaign of misery and misdirection against the Dark Angels, Typhon’s fleet attempted to acquire the Tuchulcha engine in fulfillment of Nurgle‘s designs but was foiled by Lion El’Jonson during the Battle of Perditus. Hounded by a Dark Angels retribution force under the command of Corswain, Typhon’s fleet later reappeared at the Zaramund System. There, the Death Guard forces were welcomed by Luther and his Fallen Angels.

After being instructed that the time was right by Erebus, Typhon and his forces rejoined Mortarion during the purging of the loyalist world of Ynyx. Disappointed that Mortarion had still not yet embraced Chaos, Typhon began a scheme to force him to accept the truth. When the Death Guard’s fleet embarked for Terra Typhon framed the Navigators of the fleet with evidence that they were agents of Malcador the Sigillite, executing them with his Grave Wardens in the name of protecting the Death Guard. Typhon then assured his Primarch that he could lead the fleet to Terra without their help, using a group of Psychic Legionaries who were Librarians in all but name only. Instead, he led them into a trap – becalming the Death Guard fleet in the warp, adrift, helpless and at the mercy of Chaos. Then came the Destroyer Plague and the Death Guard were struck down as the Legion suffered agonies beyond imagination, not even being able to suffer death. 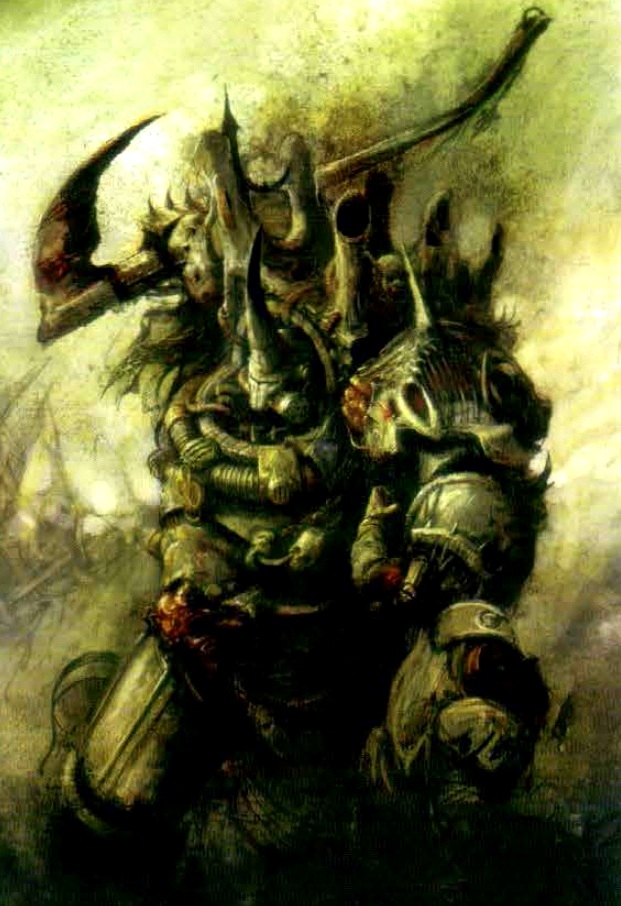 Enraged at the trap he had led them into, Mortarion himself confronted his former friend aboard the Terminus Est. Typhon expressed his desire for Mortarion to accept Nurgle’s embrace, but instead the Primarch attacked the First Captain. Typhon’s psychic abilities allowed him to hold off the Primarch’s attacks for a time, however, Mortarion eventually prevailed and struck down Typhon with his scythe. Due to the Destroyer Plague, Typhon quickly came back to life.

Mortarion then revealed his trump card: unleashing the deformed Ignatius Grulgor from his confines. Grulgor strangled Typhon to death, fulfilling his oath to Mortarion to kill the First Captain. However Typhon quickly came back to life, and both the First Captain and Daemon laughed as Mortarion realized he had been betrayed. As a reward for his service to Nurgle, Grulgor dissolved and merged with Typhon’s body. His body became home to the flies of Nurgle, his armour a hive of pestilence. He then became Typhus, Herald of Nurgle and the Host of the Destroyer Hive. Fully corrupted by Chaos, Typhon and the rest of the Death Guard went on to fight for Horus in the Siege of Terra.

During the Siege, Typhus worked with Perturabo, Abaddon, and Zardu Layak to summon the influence of Cor’bax Utterblight into the Imperial Palace in order to subvert the Imperial defenses there. He next took part in the assault on the Colossi Gate against forces led by Jaghatai Khan, Constantin Valdor, and Raldoron.

Since the Heresy, Typhus has continued to spread the glory of Nurgle across the galaxy. Leading a contingent of Death Guard of the Plague Fleet from the Terminus Est, Typhus is known to have laid waste to many worlds and waged many battles in Nurgle’s name. He has even traveled to the Garden of Nurgle inside the Warp itself, where he has battled Khornate Daemons. After killing the leader of this daemon army, he took the dog-headed daemon’s guts and brought them to the Nurgle Palace itself as a gift for Nurgle’s Cauldron. The Lord of Decay was so pleased that for this great deed Typhus was honored to dip his Manreaper into the filth of the Throne of Nurgle.

Typhus turned into Plaguebearers whole population of Protheus and Carandinis VII with all their billions of people. He destroyed the population of the Shrine World Jonah’s World with a carefully orchestrated pandemic and unleashed the Red Flux on the planet of Florins wiping out the entire male population there. Typhus has also laid waste to the world of Ligeta with a noise-plague where the infected became forced to eternally sing a hymn to the Lord of Decay. In 757.M40, he killed 23 billion people on Hydra Minoris with the Zombie Plague. In the 13th Black Crusade, Typhus’ Plague Fleet was the first Chaos force encountered by the Imperium. In the Crusade, his forces went on to ravage the Agripinaa Sector. He also oversaw the Infestation and desecration of a holy planet Annunciation by himself alone.

In M41 Typhus once again attempted to unite the Tuchulcha Engine with its brother devices, this time in cooperation with the Fallen Angel Astelan. The two planned to gather the original Fallen with Typhus’ own forces to create a new legion known as the “Death Angels”. However, they were foiled by the Dark Angels led by Azrael and surprisingly, Cypher. 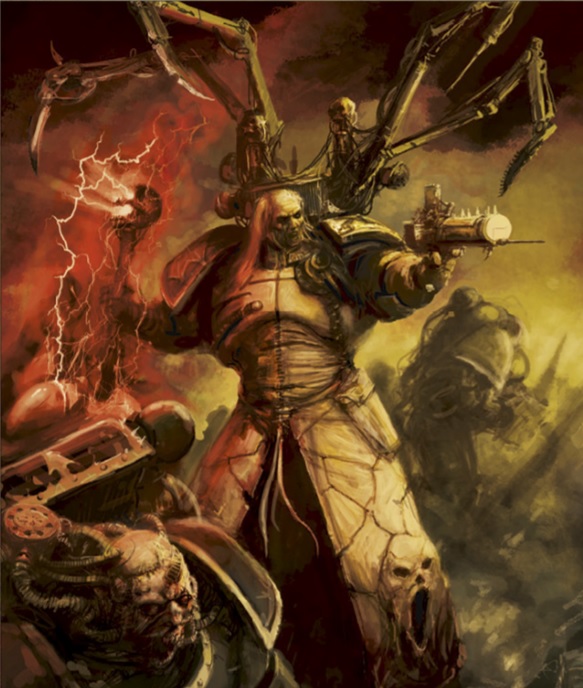 After Fabius Bile stole the Nurgle artifact Ark Cornucontagious from the Scourge Scars, Typhus pursued the former Emperor’s Children Chief Apothecary with his Plague Fleet in a bid to reclaim it and with it the Spider’s head. In the ensuing War of the Spider, Typhus battled not only Bile’s Terata and his Shriven allies but also a Custodes force under Shield-Captain Tyvar. Thanks to Bile’s machinations, Typhus was unable to corner the Spider and had to withdraw in the face of the Custodes.

Typhus later appeared as part of Mortarion‘s armada during the Death Guard invasion of Ultramar. Typhus led a splinter fleet which terrorized the outer regions of Ultramar. During the invasion of Ultramar, Typhus no longer maintained even slight reverence or respect for his Primarch. The Herald of Nurgle scolded Mortarion and stated that he was closer to the vision of Nurgle. Typhus expressed no desire to work under Mortarion directly, but was willing to take part in the Ultramar campaign simply to further Nurgle’s design.

Typhus is a formidable psyker favored by Nurgle, able to call forth both Nurgle’s Rot and the Wind of Chaos psychic powers. In addition to his Manreaper Daemon weapon, his body is host to the Destroyer Hive; a horrific plague that manifests as a swarm of insects that continuously pour from the cracks and vents in his Terminator armour. 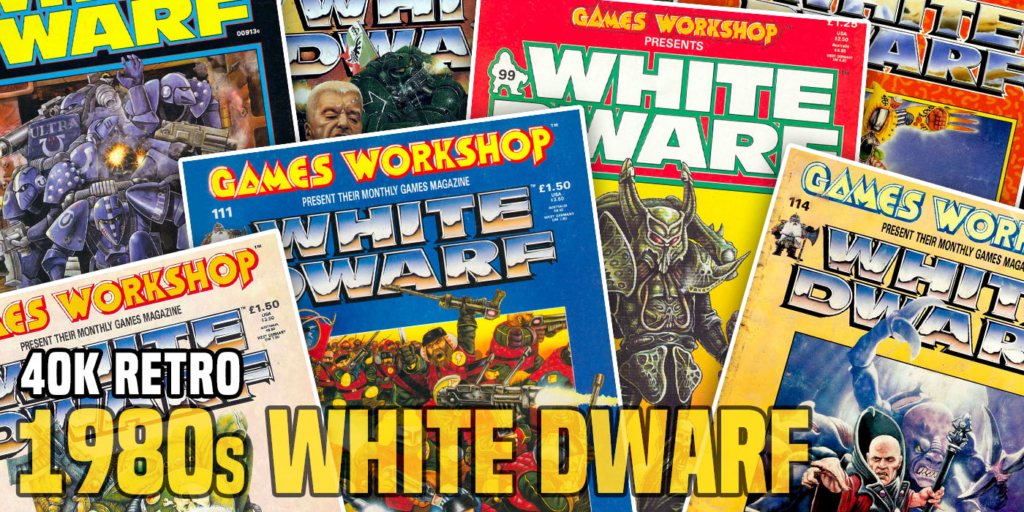