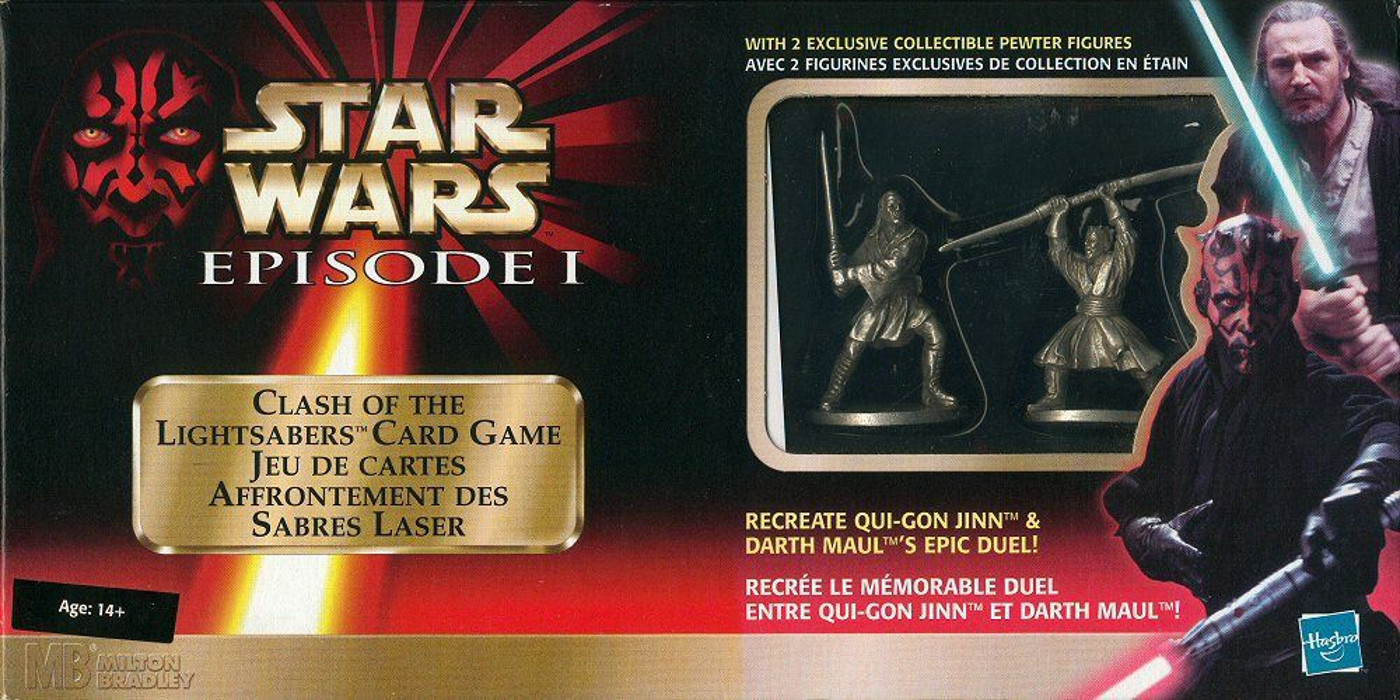 I’ve been watching a lot of Star Wars, which got me thinking about the only good part of Episode 1. Spoilers: It wasn’t podracing.

Ask any Star Wars fan, what is the best part of Phantom Menace, and you’ll get one of two answers. Either Podracing, which is the wrong answer, or Dual of Fates, the correct answer. 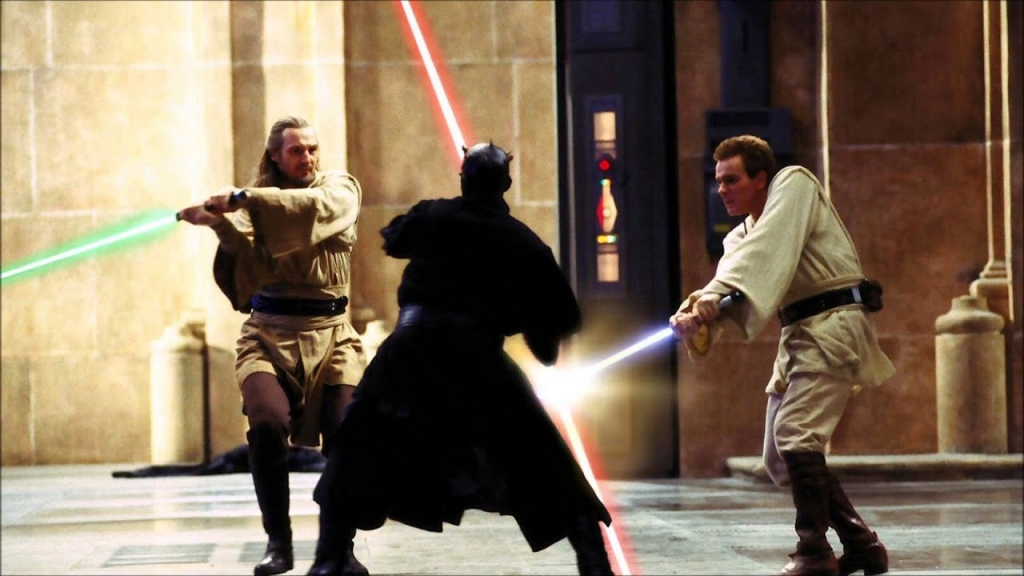 With the mountains of games, both video and tabletop, which followed Star Wars: Phantom Menace, there must be a game strictly devoted to this iconic showdown. And wouldn’tcha know it!

This is a War-style card game with hand management and press-your-luck mechanics. The goal of both players is to be the first to win 5 points. Battles are won in War-style, combat strength comparison, in sets of 3 battles per round. 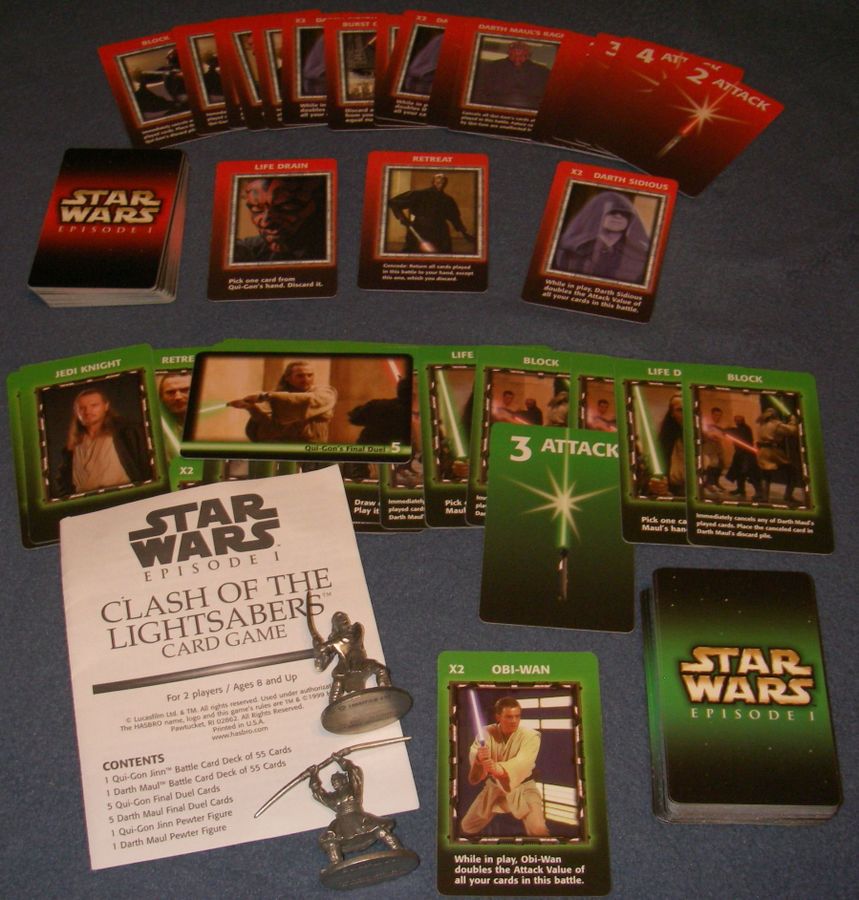 Each player takes the role of Star Wars characters Darth Maul or Qui-Gon Jin. The minis don’t have really any gameplay impact aside from keeping score, but they are neat! 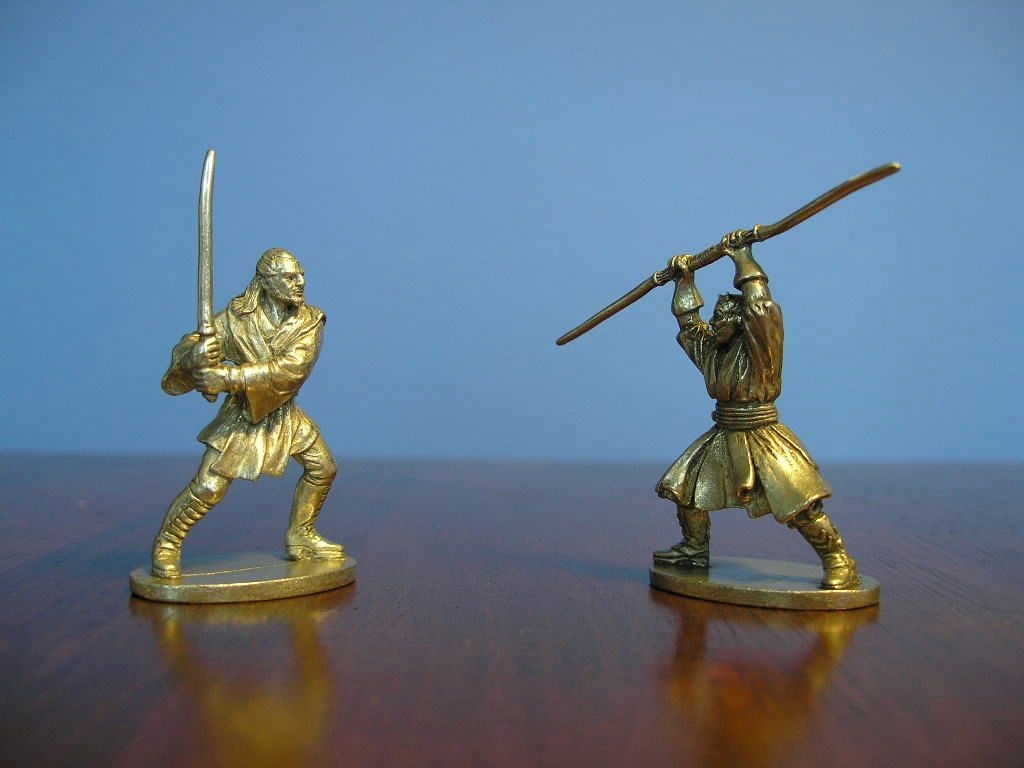 Each round, both players draw 7 cards to begin the battle. These cards are used for the individual battles, but also can be played after the attack cards are revealed to try to eke a win out of a close contest. 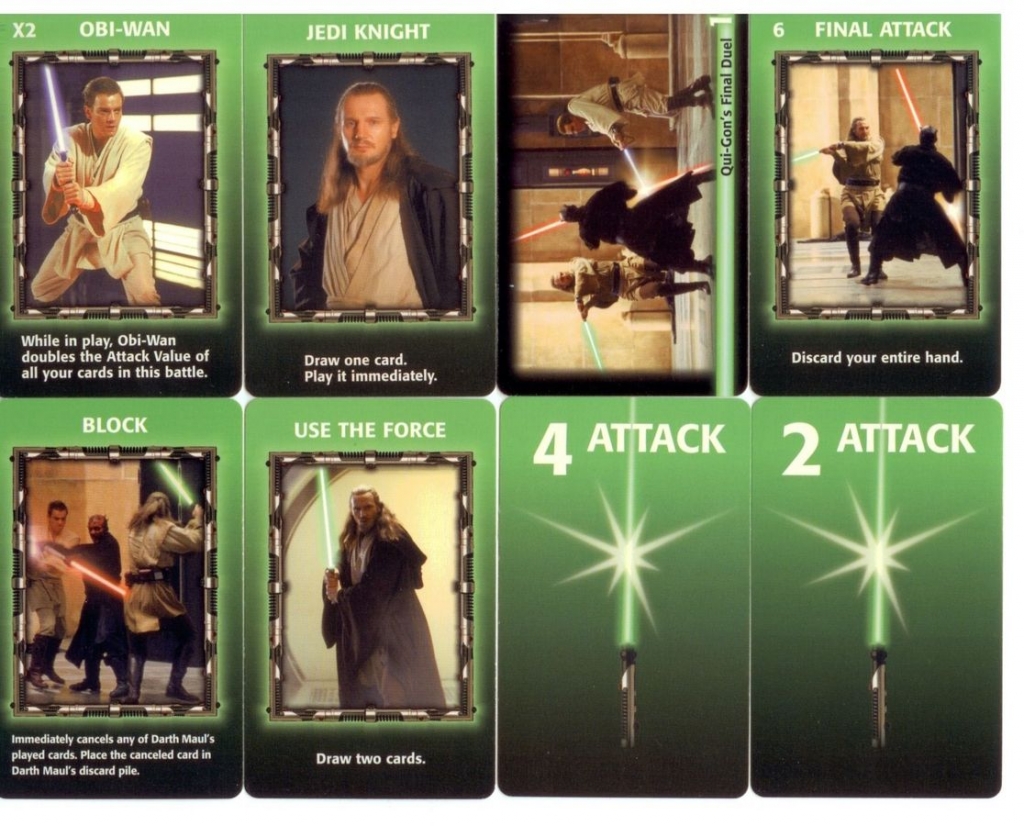 Each round makes up 3 separate battles. Before each round, both players secretly place 3 Attack cards face down, 1 for each battle, in the middle of the play area. The cards – each featuring a still from Star Wars: Phantom Menace – along the sides are for keeping score between each round. 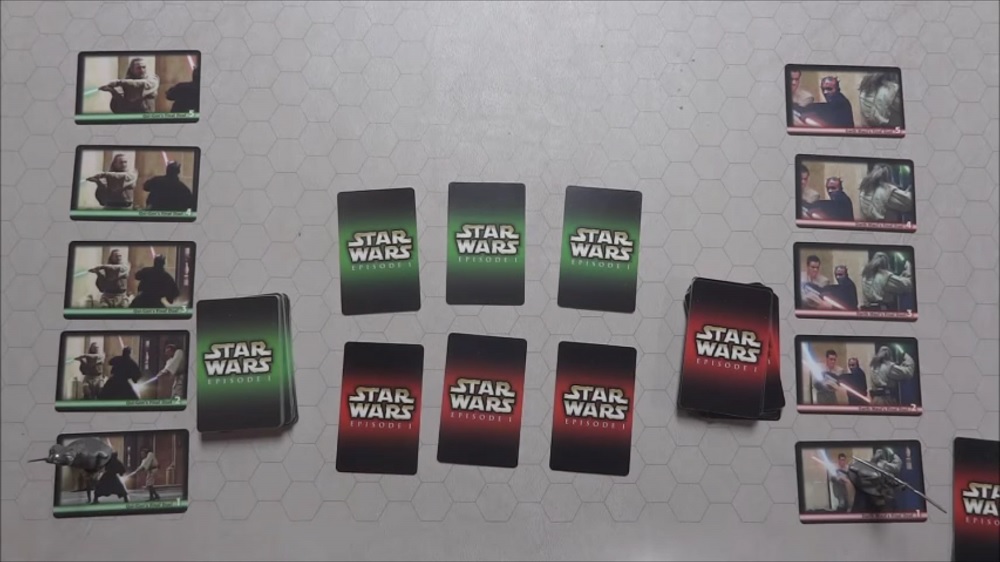 But what makes this game more than just War is the way the 3 battles work within each round. Players draw before the round and won’t draw again until the next round starts. During each battle, players can play cards from their hand to attempt to influence the battle. This means players will have to know when to concede one battle in order to save cards for the other 2, in the hopes of winning the majority. 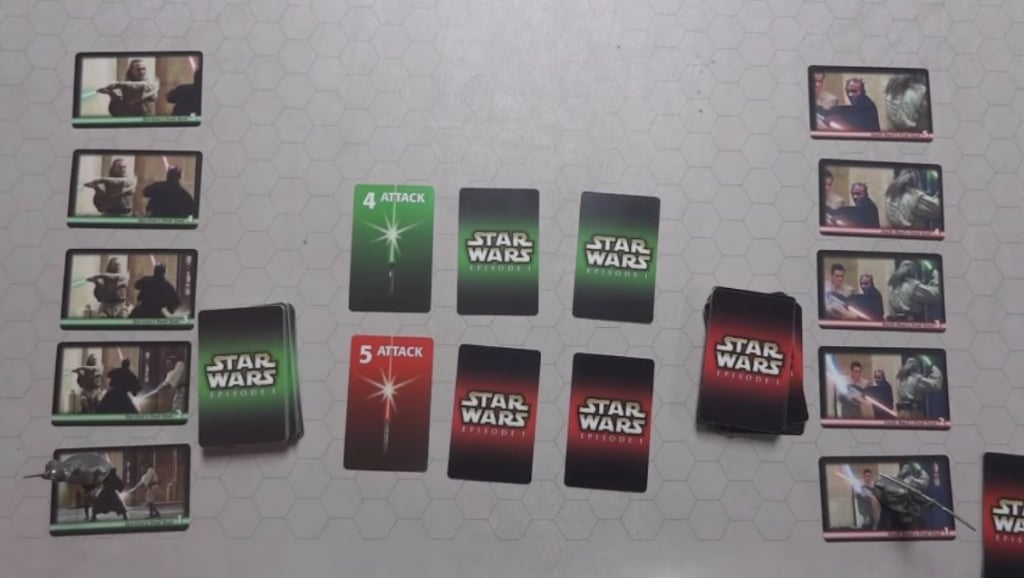 Qui-Gon is losing this first battle. He’s got to decide if he wants to play additional cards to attempt a victory or save those cards for the other 2 battles. To earn points, players must win a majority of the 3 battles. Winning 2-1 earns 1 point, winning 3-0 earns 2 points. First to 5 points wins!

For a game with such a simple appearance, there’s a surprising amount of strategy here. Knowing when to push for a victory versus conceding to have a better footing later. If you’re looking for a quick-playing card game with a good amount of gameplay (and some pretty sweet pewter miniatures), with the bonus of being themed about the best part of the Star Wars prequels, Clash of the Lightsabers might be for you.

Plus any excuse to play Duel of Fates on blast.

Author: Matt Sall
Matt has loved games of all kinds his whole life: board, video, war, roleplaying. He's worked as a writer for BoLS since 2017. He's worked as freelance editor for board game rulebooks and has designed many of his own games as well.
Advertisement
Board Games Card Games Retro Games Rules Star Wars
Advertisement

Geeky Stocking Stuffers for Every Fandom on Your Nice List 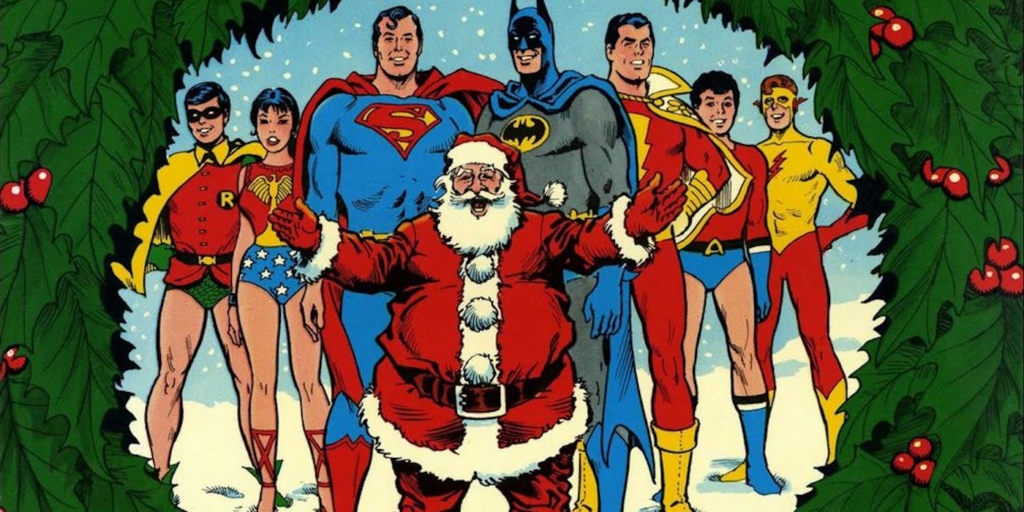