Connecting 40K and Age of Sigmar – It’s All One Timeline 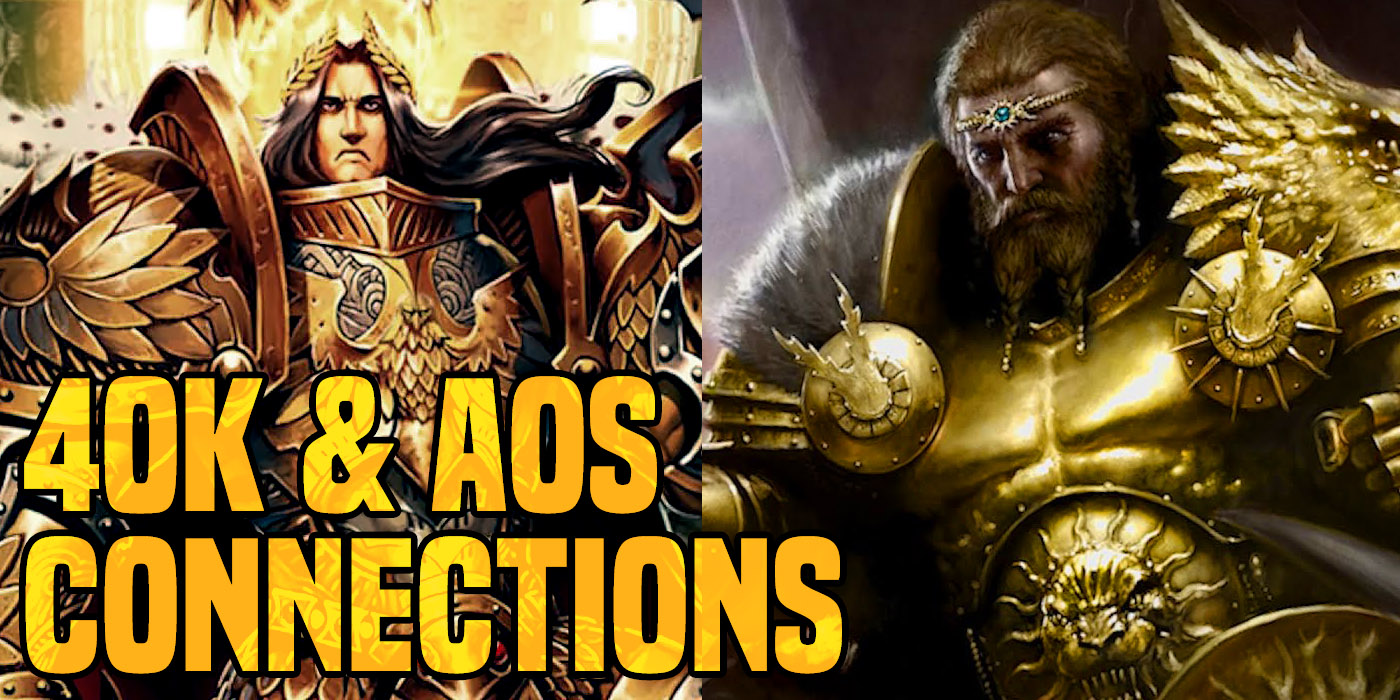 Can we find a direct connection between Warhammer 40K and Age of Sigmar? The clues are all right in front of us.

People have long wondered if both all the main Warhammer Games, Warhammer 40,000, Warhammer Fantasy Battles and Warhammer: Age of Sigmar, are set in the same universe. Its been something people have debated for years. People have also debated where on the overall timelime the various games fall. Lets take a look at the evidence, old and new, and and see if we can reach any conclusions.

40K and WFB/AoS share a number of aspects. One of the most obvious is the presence of Chaos and Daemons. These concepts/factions span all game systems and settings. More importantly they exist not simply as similar concepts but as the same Gods and characters. While not every daemon mentioned in present in both setting, a huge number are, including the four main Chaos gods. This is a pretty direct connection between all the major settings. While it is never outright stated that, for instance, the Be’lakor from 40K and the Be’lakor from AoS are the same being, they do share a name, personality and in game models. The presence of  all these things is a strong argument in favor of the unified setting theory. 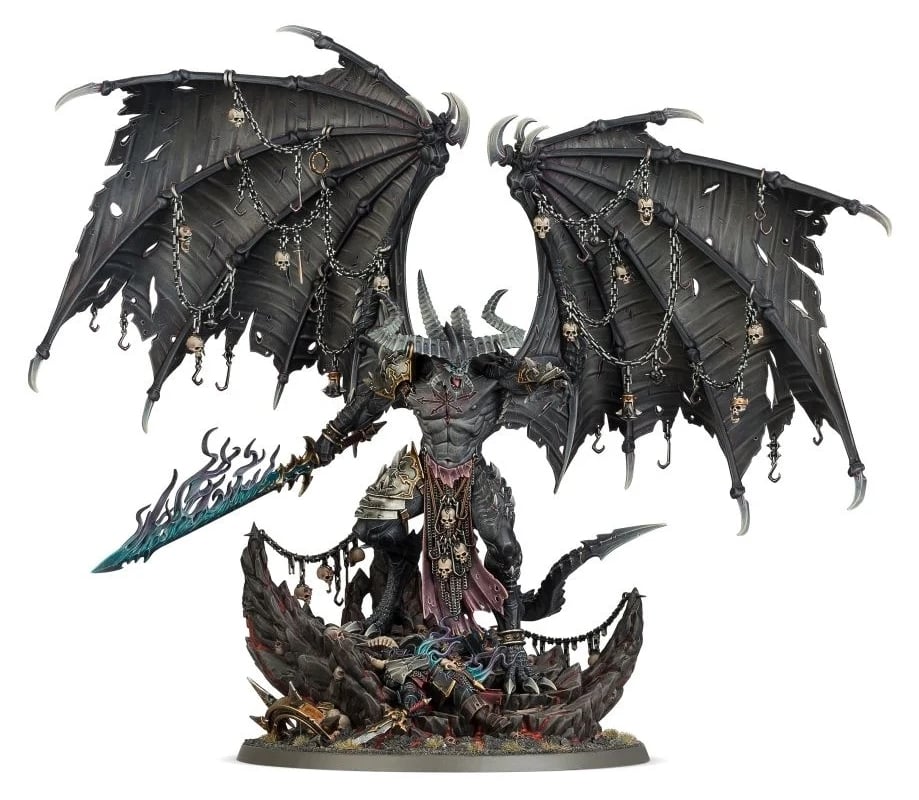 Now Chaos and the Warp are very weird and time flows differently. The presence of daemons in both settings doesn’t give us a 100% clear time lime, but it does offer some additional hints. We know Slaanesh was born roughly around 30,000 CE in the 40K setting. In WFB and AoS Slaanesh has been alive basically the whole time this argues that WFB/AoS would take place after the events of 40K. Again given the nature of time in the warp this is not conclusive evidence.

Old Ones And Slaan

Another major force in settings of both 40K and WFB/AoS are the Old Ones. In 40K the Old Ones are an ancient race, some say the First Race. These beings were extremely powerful starfarers that dominated the Galaxy for untold ages. They created many of the known races, and bound their empire together with Webway portals. They eventual fought the War in Heaven with the Necrontyr, which lead to their downfall. 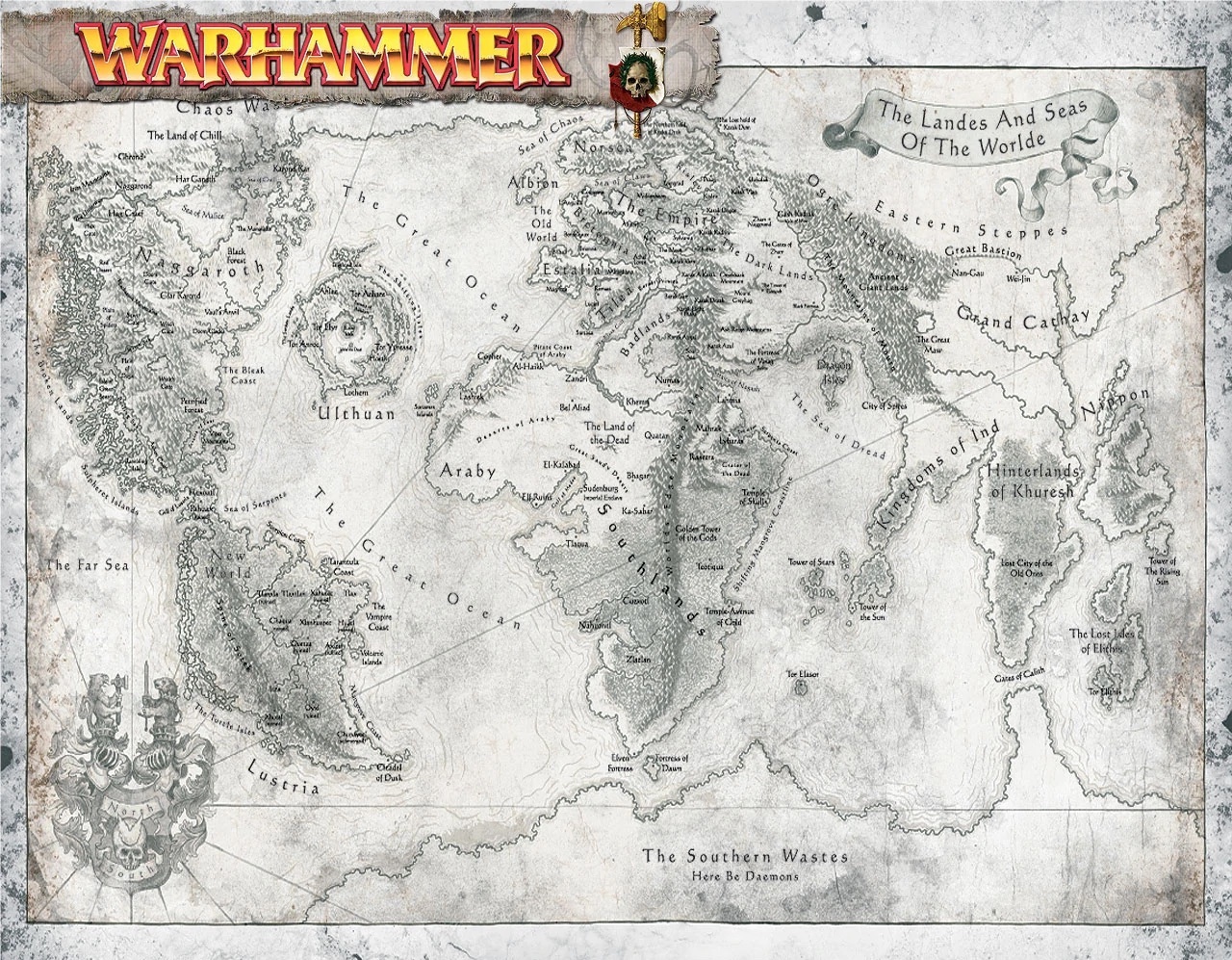 The Old Ones are also present in Warhammer Fantasy and are described in very similar terms. They were a race of ancient beings that come from outer space on silver ships. They used the warp, and Warpgates, to travel the galaxy and created many races. One interesting note from the early WFB editions, is that the Old Ones would terraform plants to fit a standard pattern, down to the shape of continents. Its likely that both the Old World and Holy Terra had this done to them, which is why they are so similar. In addition the Old Ones worked closely with a race they created, known as the Slaan. The Slaan were also around in the early days of 40k.

Here again we have a strong connection, mainly dating from the early 40K and WFB books, between the settings. The Old Ones are present in both, and while not conclusively the same beings sure seem like they could be. Moreover the Old Ones in WFB were a Spacefaring race clearly putting the Old World in an active galaxy. Now one intresting quirk here is that the Old Ones were said to have visited the Old World around 15,000 years before the birth of Sigmar, or around 17,000 before the End Times. In the 40K setting the fall of the old ones took place some 60 Million years before the current setting. This is a rather hard timeline to make sense of. If the settings are the same it either means that humans were around long before they were thought to evolve on Old Earth, that some Old Ones survived the fall of their Empire and were messing around with stuff (the T’au also maybe?) or that time is just weird. 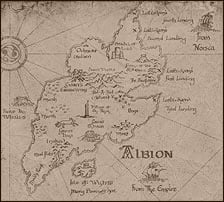 Way back in the day GW run a summer campaign for Warhammer Fantasy set on the island of Albion. The Dark Shadows Campaign was a world wide event (check out the old website!), at the end of which the races that did best were given some new items. Among these items were ones clearly meant to be a suit of Space Marine Power Armor, a power fist and a flamer. This was again a nod that just maybe WFB took place after 40K.

To me the biggest link between them in recent years has been Sigmar himself.  For the longest time it a was a popular theory that Sigmar was nothing less than a Primarch. When you look at it, his story very closely mirrors that of the known Primarchs. He was born under the sign of a twin tailed comet, which could have easily been a pod or warp disturbance signaling his arrival. He was raised as a normal human, but soon displayed super human powers. He eventually united his people before vanishing one day, with some saying he ascended to the heavens.

This is a fair classic Primarch story, with a sad twist. If Sigmar was a Primarch he would have had to have been one of the two lost ones, meaning that at some point after rejoining the Emperor he died, his potential never fulfilled. Maybe the taint of Chaos on the Old World made him flawed in his father eyes. However the return of Sigmar in the End Times rather put this theory to rest. Since he came back, he couldn’t be a Primarch. Which leaves an interesting thought, what if Sigmar is the Emperor? 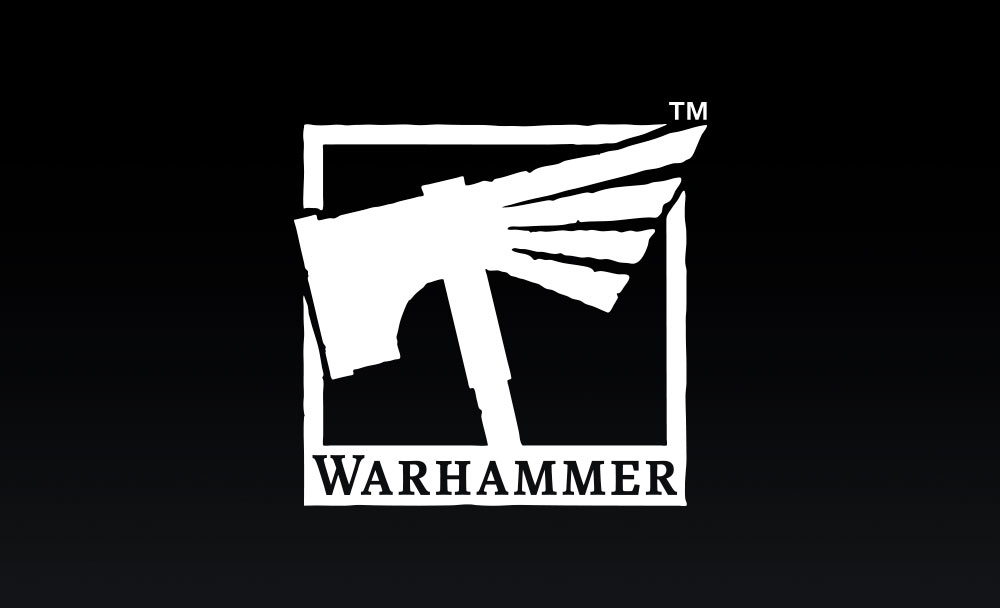 So here is my unified theory. 40K is chronologically the first setting. The events of 40K happen as we widely know them to. Sometimes around 25,000 CE a small group of surviving Old Ones happen upon a world in a stable part of the Eye of Terror and transform it. The setting progresses to the current day. Now one of the major theories about the Emperor of Mankind is that the Golden Throne is preventing him form regenerating or being reborn. It’s thought that he needs to be killed, so he can be reborn. Lets say at some point in the not so distance future of 40K that happens. Maybe Cypher kills him, maybe Abaddon does. Either way he is killed, but thanks to being a perpetual he is reborn in the flesh far away, in the Old World. 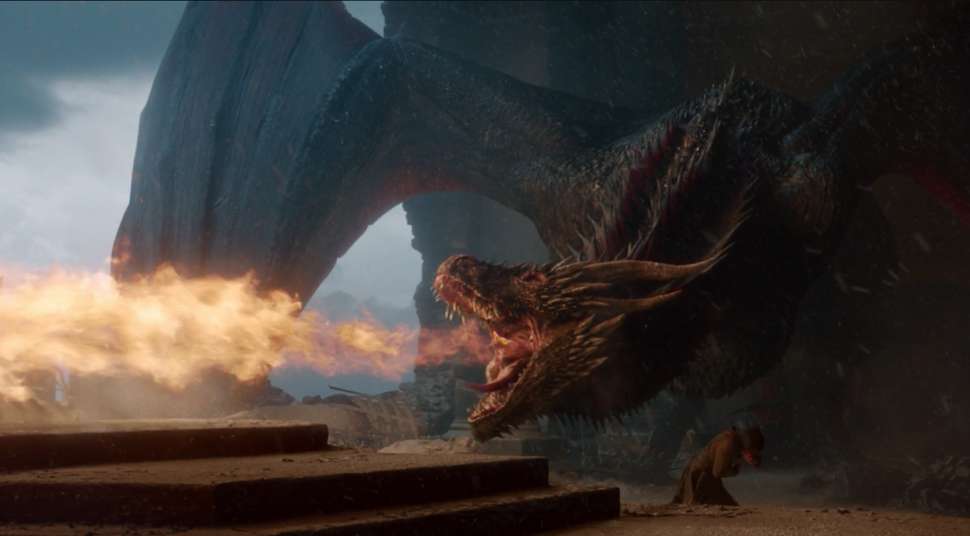 Newly reborn the Emperor, now known as Sigmar, needs time to remember his powers and who he is. His nature however drives him to fight to unite humanity and battle the warp. He does this forging the Empire. Eventually his memory and powers return and the Master of Mankind returns to the stars to fight the big war. 2,500 years pass. At the end of which a great cataclysm happens. Maybe the Great Rift finally finishes swallowing the galaxy. Maybe the good guys collapse the Eye of Terror. Maybe the Emperor sacrifices the Imperium to reach his full godhood.

Either way the galaxy, not just the Old World collapses in the warp or the Great Aeather. The Emperor, now fully powered returns the to Old World, which explains why Sigmar is far more powerful in later versions, which is now more his home world than Terra for the final act and perseveres some group, thus moving us into the Age of Sigmar.

When you look at it the Emperor and Sigmar share a number of traits. Both are effectively humans that rose to godhood, and are possibly the most powerful beings in exsitance. Both are often described in similar ways. Sigmar manifests clad in golden plate and shining with the light of the stars. The Emperor also wears golden plate and his coming is compared to the coming of the sun, or dawn. Both have some connecting to golden light. Both are powerful warriors with control of “magic”, but who also tend to try to mix silence with their pursuits And of course both are known for creating similar armies of enhanced humans to wage their wars. I think it not too far fetched to think that these two beings are one and the same and tie the whole setting together. Or this could all be a crazy theory placed in my mind by the Changling, we’ll probably never know.

Note: I know I didn’t cover every connection between the settings, there are whole ton of them out there*, so I tried to hit on the major ones.

What do you think, could this theory be true? Let us know down in the comments!

* Such as the Ambull that ended up in an Old World mine (WFRP 1st Ed.), the Skaven hearing an “Elf” voice talking through a “far-squeaker” high-tech machine in a Slann temple in Lustria (End Times), and last but not least, Empire Witchhunters studying Slaanesh receiving visions of the Emperor’s Children (Liber Chaotica). 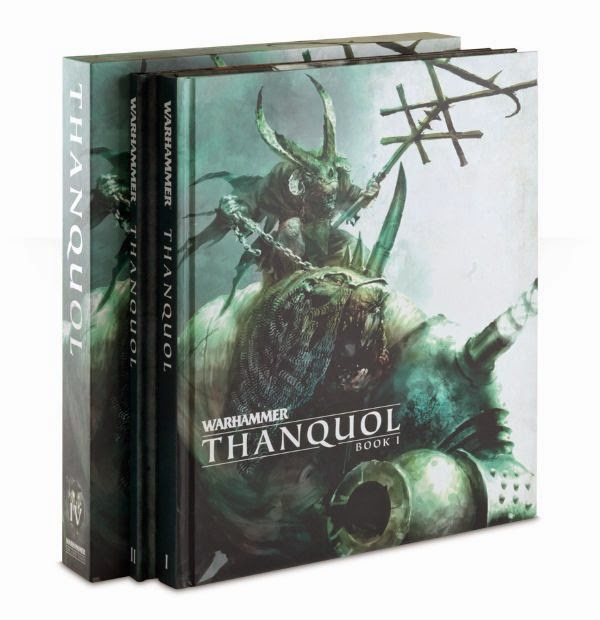